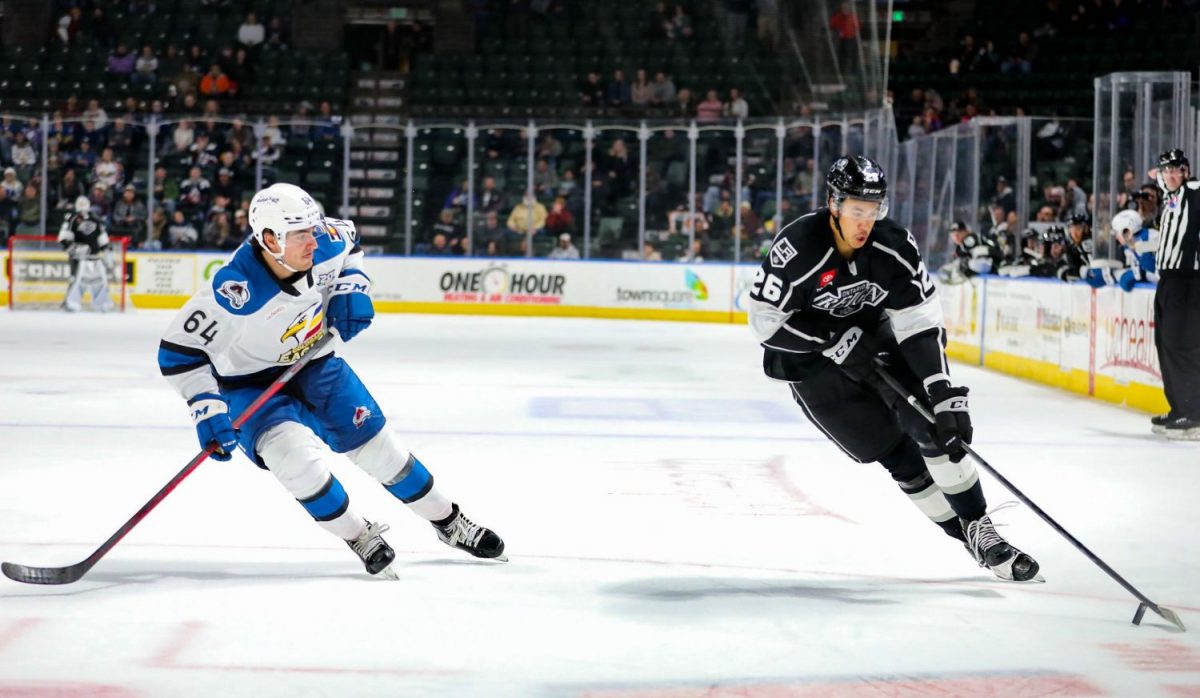 TONIGHT’S MATCHUP: The Ontario Reign are set for the back half of their midweek two-game series in Loveland, Colorado Wednesday night at the Budweiser Events Center. With a 7-3 win over the Eagles on Tuesday, Ontario became just the second team to score seven or more goals in Loveland since Colorado joined the AHL at the start of the 2018-19 season. The Reign have a 3-1-0 record in their previous four matchups with the Eagles this season, including a 3-1 victory at Toyota Arena on Dec. 2 and a series split at the BEC during the first week of November.

WHAT TO WATCH FOR: Prior to Ontario’s seven-goal outburst Tuesday, the Eagles came into the week allowing the lowest number of goals per game in the league. Colorado is now third in the AHL, giving up 2.53 goals per contest, while the Reign rank seventh (2.71). Ontario has an opportunity to move within two points of the Eagles in the Pacific Division standings if they’re able to pull off a sweep with a regulation win Wednesday. The Reign currently sit in fifth place in the standings, while Colorado is fourth with 45 points. Ontario has scored an average of 3.18 goals per game through their first 34 contests, while offense has been tougher to come by for the Eagles who are 22nd in the AHL scoring rankings (2.92). Ontario’s penalty kill remains strong at 84% and is 5th-best in the league overall this season.

LAST TIME OUT: The Ontario Reign scored six unanswered goals to dig themselves out of a two-goal hole in the second period and streak past the Colorado Eagles to win by a final score of 7-3 on Tuesday night at the Budweiser Events Center. Samuel Fagemo and TJ Tynan led the way offensively with three points apiece in Ontario’s fifth straight victory, while Martin Chromiak scored his fourth goal during the winning streak and Alex Turcotte netted a goal and an assist in his return to action after missing five games with an injury.

CHROMIAK SHINING BRIGHT: Martin Chromiak extended his career-high point streak to five games Tuesday with a goal for the third straight contest. The 20-year-old backed up a three-point performance Saturday with a goal in the third period off a feed from center Alex Turcotte to give Ontario’s late lead some insurance. Chromiak’s fourth goal of the season also gave him a double-digit point total for the year, with 10 points in 18 games. The Illava, Slovakia native’s point streak started when he posted his first career AHL goal on Jan. 8 in a win at Coachella Valley.

SCOUTING THE EAGLES: The AHL affiliate of the NHL’s Colorado Avalanche, the Eagles are led by Jean-Luc Foudy who scored his ninth goal of the season Tuesday night after rejoining the roster following a nine-game call-up with the Avalanche. Foudy has 24 points in 28 games to lead the roster in overall scoring. Charles Hudon, who has also played in nine games with the defending Stanley Cup Champions this year, is just behind Foudy with 22 points in 27 games on a team-leading 12 goals and 10 assists. Winger Callahan Burke has scored 20 points on 10 goals and 10 assists, while longtime NHLer Alex Galchenyuk and Oskar Olausson have also made an offensive impact with 17 and 15 points respectively. Defender Keaton Middleton leads the active blueliners with 15 points on a goal and 14 assists. In goal, Justus Annunen and Jonas Johansson have both had success while splitting time evenly between the pipes. Johansson has a 9-7-0 record in 16 appearances with a 2.46 goals-against average while Annunen’s earned a 12-5-3 record in 20 contests with a GAA of 2.39.

DUDAS DELIVERS: While playing alongside Martin Chromiak over the past two weeks, Aidan Dudas has produced an identical five-game point streak consisting of seven points on a goal and six assists. Dudas’ longest run of the season has been highlighted by assists in each of his past five games, including helpers on three of Chromiak’s four goals. The Parry Sound, Ont. native also had a pair of primary helpers in Ontario’s 6-3 win over Henderson last Wednesday. In Saturday’s win over San Diego, Dudas netted his seventh goal of the season and is now just three tallies shy from matching his career-high of 10, which he set last season in 61 games. Overall, Dudas has 16 points this season (7-9=16) while suiting up for all 34 of Ontario’s contests.

LIAS STAYS HOT: With his team-leading 13th goal of the season Tuesday, Lias Andersson found the back of the net for the fourth time in Ontario’s last four games. The Smogen, Sweden native is now tied for second on the team in scoring with 24 total points in 29 games with the Reign this season (13-11=24). Andersson has also taken more of a shoot-first approach during the Reign’s recent win streak, totaling 19 shots on goal over Ontario’s last five games (all wins). The attacker is averaging a point per game from the club’s first seven contests of 2023 with four goals and three assists and leads the team with seven power play goals this season.

GAUNCE THRIVING ON DEFENSE: While he’s one of just three Ontario skaters who have yet to score a goal this season, Cameron Gaunce has been dependable on the back end, leading the team with a +14 rating from his 29 contests. There’s an 8-goal differential between Gaunce and the next-highest-rated Reign skater, Tobie Bisson, who has earned a plus-6 mark in 30 games. Although he has yet to be credited with a goal, Gaunce is never afraid to direct the puck at the net and ranks third among Ontario blueliners with 38 shots on goal. The Sudbury, Ont. native has collected six assists for the Reign and is just five points away from 300 in his 13-year AHL career.