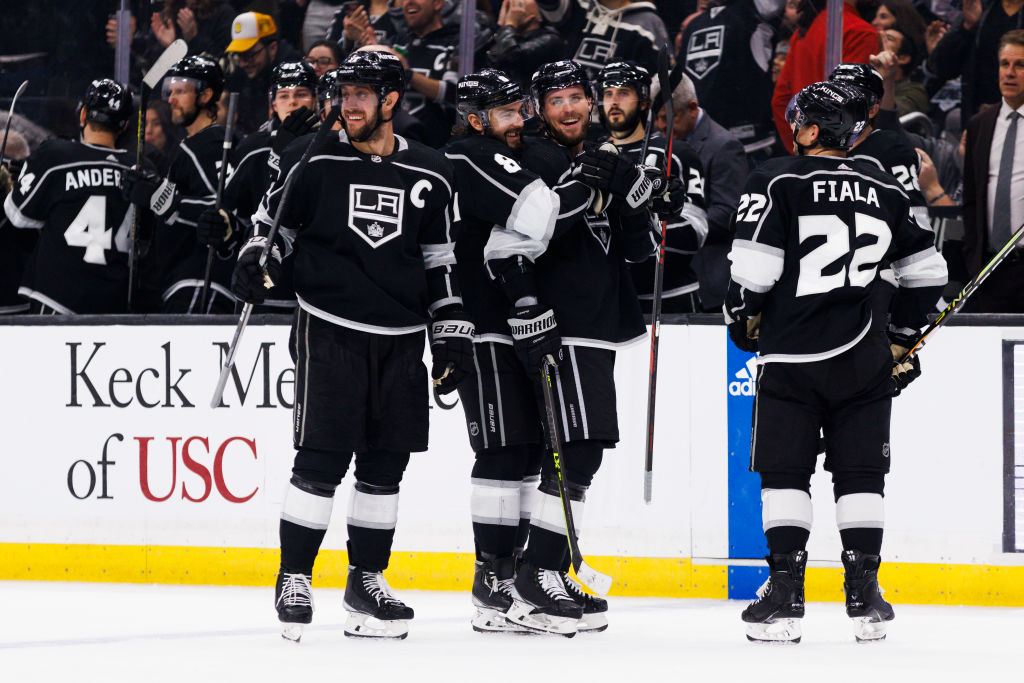 Good to see the fellas back on the ice. The Kings did not hold team practices yesterday or Sunday and regrouped today for a long, full-team skate.

The @LAKings are back on the ice! First of two practice days this week before a rematch with Dallas on Thursday. pic.twitter.com/ShDJPwiOxp

Personally, I thought the two days felt like a week. Todd McLellan laughed and said it felt more like 15 hours. Either way, the Kings have still played the most games in the league until this point, with 46, but we’re now seeing a lot more teams within 2-3 games of the Kings, as opposed to the 5-6 games we saw even just a week ago. It’s amazing what four days without games will do. All of a sudden, the Kings are just one game ahead of Vegas, Edmonton and Calgary and three ahead of Seattle. The latter three will move a game closer over the next 48 hours, before the Kings play again on Thursday, as LA returns from its longest break of the season to date.

Now, it’s back to the grind. The Kings will practice again tomorrow, making two skates before the team gets back at it for a rubber match with the Dallas Stars on Thursday evening in Los Angeles. Dallas took the first meeting in Texas, behind three power-play goals, while the Kings fought out a 3-2 victory with a strong effort on home ice earlier this month. Winner takes all for the season series in two-days time!

Looking at today’s practice, the Kings appeared to align similarly to how they looked against New Jersey on Saturday. Listed below for reference –

The Kings are still without forwards Arthur Kaliyev and Trevor Moore, who have week-to-week designations. Neither player has skated since suffering their respective injuries back in December and the next real update comes when we see one of both players on the ice for a practice, presumably in a non-contact red jersey.

Today’s skate focused, in McLellan’s words, on a few areas of the game the Kings maybe haven’t had the chance to really breakdown of late. As is typically the case with practices, he didn’t exactly detail the practice plan, but his 10,000-foot overview is below.

“It’s kind of been the storyline for quite a while, where we haven’t had this type of break,” Todd McLellan said. “Coming out of the break, we’re going to get the engines going again, lots of long skating today. We worked on parts of our game that sometimes you can’t when you’re tired, so I would say that we got done what we needed to get done today and tomorrow will be another day.”

Notes –
Power-Play Producing
I’m not sure how to label power-play units at this point. Is it the first unit and the second unit? The goals scored are 20-19, so we’re basically even. Kopitar’s unit and Danault’s unit? Might be easier, using the centers as the descriptors?

Either way, what we’ll call Kopitar’s unit has six goals over the team’s last three games played, including two more against New Jersey last time out on Saturday. That unit has perhaps had to undergo the largest philosophy turnover this season, with respect to the fact that it had the long-time holdovers in Anze Kopitar, Drew Doughty and Adrian Kempe.

“A lot has changed on the powerplay in a relatively short period of time and belief is the strongest thing you can have,” McLellan said today. “When there’s lots of change, I think individuals stand back and they go okay, is this going to work or not and then they have to try and make it work. If they don’t believe it, they’re not even going to give it a go, but I give all of our guys credit because they began to believe in it early enough they kept applying the principles. It wasn’t pretty early, but it started to come around and, knock on wood, it’s been a strength of ours lately.”

Adding Kevin Fiala, who has three of those recent six goals, has naturally been a big positive, but getting the rest of the unit to commit to the style of play has been huge as well. Everyone on that unit has discussed the importance of rotation, making life harder on the opposition to defend because they can’t always depend on certain players in certain spots, as was almost always the case last season. The Kings are setting up quicker, with zone entries and faceoff wins both helping in that cause.

Doughty and Kempe both spoke about the addition of Fiala, but more as it relates to getting into the offensive zone, as opposed to scoring inside it. Doughty highlighted how Fiala has complemented Kempe well on zone entries, giving the Kings several additional options when trying to gain the offensive zone with possession. Kempe agreed, as he spoke about relying mostly on one set breakout play last season, with he as the lone option to gain the zone with possesson. Fiala provides another threat in that department, which has been big for the Kings.

“It definitely helps that Kevin is doing part of it as well now,” Kempe said this morning. “Sometimes he carries it in, sometimes I do and I think it helps that we can roam around too and play wherever in the zone. I wind up in the middle sometimes, depending how it works, and I think it throws off other PK’s if I’m usually on the flank and they see me in the slot, they have to know where Kevin is too. It definitely helps.”

From that point on, Doughty spoke about the team finally bearing down and finishing the chances they’ve created.

As McLellan indicated, it did take some time for the unit to fully gel, perhaps more for Kopitar’s unit than Danault’s. Even so, it wasn’t as if that unit was not creating chances, but perhaps they just weren’t fully connected or fully on the same page. Now, his unit feels like they’re going to create those high-danger looks, if not score on them, every time they take the ice. Belief, after all, is a powerful thing.

“I honestly think, even earlier, maybe we weren’t burying as much but we were moving it around pretty good and getting some good, quality chances,” Doughty said. “Now the pucks are going in for us, because we’re continuing to do what we’re being told to do by the coaches and it’s great to see. I feel almost every time when we go out there that if we’re not going to score, we’re going to get some Grade-A chances and that’s a good feeling when you’re going out there.”

Todd Talks – Bill Ranford
A lot of commentary on goaltending as of late. And I get it, it’s the only position where the Kings have to choose one player versus another, or in this case, two others. There’s only one who can start a given game and there’s no easing a player in or limiting a role. It’s the position where the spotlight is shined brightest and there’s no hiding from it.

That’s where Todd McLellan values his goaltending coach, Bill Ranford, the most. As Pheonix Copley and Jonathan Quick adjust to different roles right now than they’ve ever had in the past, McLellan places his trust in Ranford’s experience and relationships to feel good about things, knowing that the situation today might not be the situation tomorrow. Just about every team has these situations pop up, but not every team has that level of trust.

“It’s got to be the toughest spot, because one or the other is playing and it’s not like they can go out and get a few shifts under their belt and start to feel good – you either feel good or you don’t,” McLellan explained. “We’re fortunate because we have Billy Ranford here and I feel comfortable with that right now because he’s been here for so long, he has a strong and direct relationship with all our goaltenders and I believe they know he’s trying to help them in every situation.”

McLellan added that he and assistants Trent Yawney and Jim Hiller typically back off there when it comes to the technical aspects of goaltending, trusting in Ranford to do his job and do it well, as he has throughout his time with the Kings. It’s as much about the relationship side when it comes to Ranford and the track record he has, especially in working with Quick. McLellan believes that relationship is there and when it’s as strong as it is here, good things happen.

“I would say the between goaltenders and goalie coaches, I think they believe he can help them, he’s proven he can,” McLellan added. “It’s two ways, he doesn’t really beat around the bush, he tells them what they need to hear, yet he’s very supportive, he goes to bat for them in our loop all the time. Once you’ve won with somebody, especially twice in Quickie’s case, I think that the bond is really strong and it’s not always like this. It’s not always smooth, you have your days, but when the bond is really strong you can get through anything and that’s what it really has with with our goaltenders.” 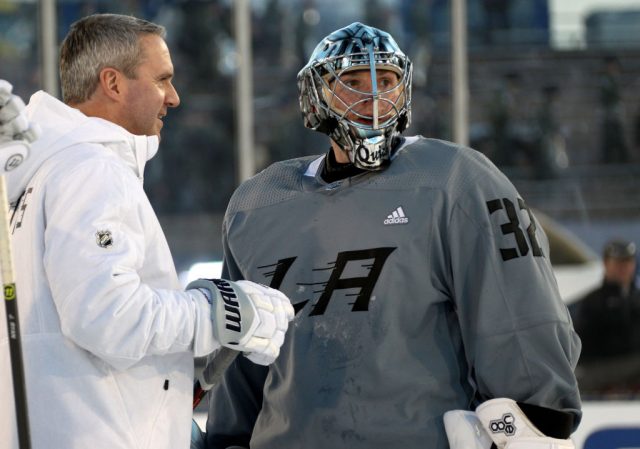 Rink Tour Roundup
Lastly, Insiders, a quick look at Sunday’s community event. As a certain writer watched an aquatic-based football team come ever so close to a win from his couch, the Kings dispersed themselves around local youth hockey rinks to skate with kids from various local programs. Would argue they might’ve made the better choice there.

Deborah Lew of LAKings.com talked with Brendan Lemieux and Todd McLellan about the initiative, with Lemieux one of the players who visited LA Kings Ice at Promenade on the Peninsula. A good read, from an eagerly participating Lemieux, available HERE.