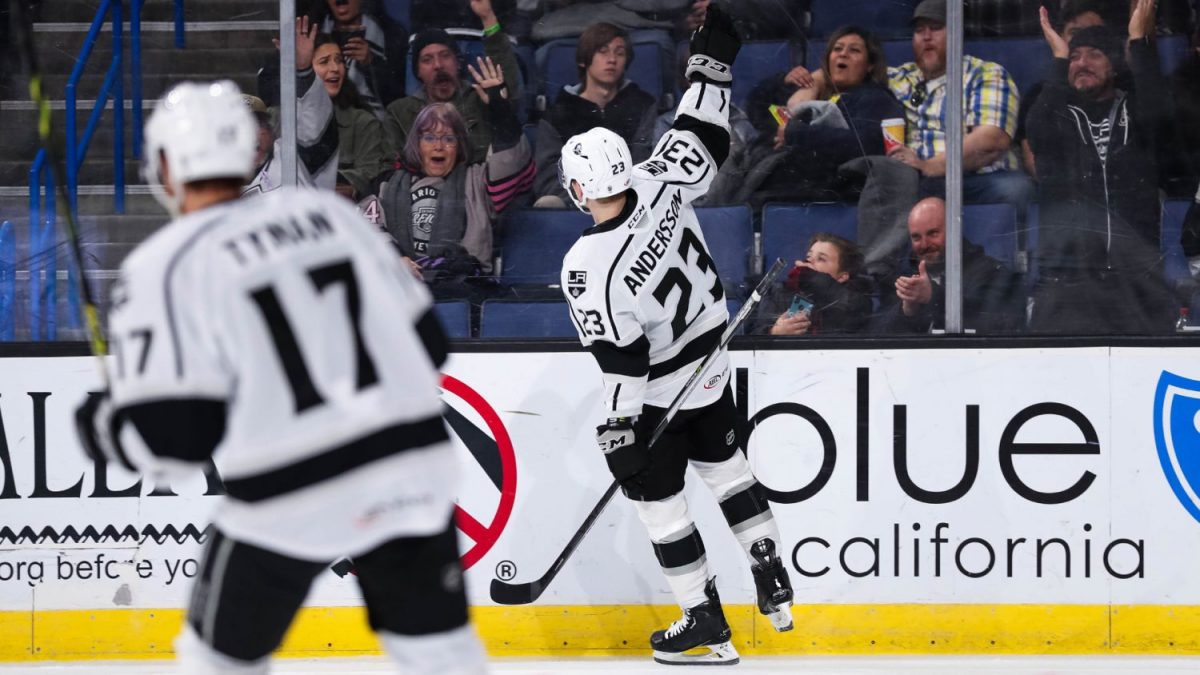 Five different goal scorers including Martin Chromiak, who led the way with three points, sent the Ontario Reign (19-13-0-1) past the San Diego Gulls (11-26-0-0) 5-2 Saturday night at Toyota Arena. The victory gave the Reign a second sweep of San Diego this season from a pair of home-and-home weekend sets and their fourth win in five contests between the two SoCal rivals.

Cal Petersen turned out 30 shots to earn the victory for Ontario, while Aidan Dudas posted a goal and an assist to extend his point streak to four games and Nikita Pavlychev netted his first AHL goal of the season.

More from head coach Marco Sturm, Chromiak and Dudas below.

The Reign took an early lead when Pavlychev used a pass from Chromiak behind the net to bank the puck off a Gulls’ skater and past the goal line. Pavlychev’s first strike also came with second assist by Jordan Spence, while Chromiak extended his season-high point streak to four games.

Just 1:14 later Lias Andersson made it 2-0 with his 12th goal of the season, driving to the net and using a wrist shot to beat San Diego netminder Olle Eriksson Ek. Austin Wagner and Tobie Bisson picked up helpers on the strike, which sent the Reign into the first intermission with a 2-0 lead.

Ontario carried that edge for the majority of a second period that saw them outshoot the Gulls 15-5. In the last five minutes of the frame Aidan Dudas extended the lead to 3-0 with his seventh goal of the season from Chromiak off a 2-on-1 rush.

Dudas returned the favor in the final minute of the frame, setting up Chromiak on another 2-on-1 rush. Chromiak put the puck into the top shelf of the net for his third goal of the season, all of which have come in the last four games. Cameron Gaunce picked up the second assist on the play.

Samuel Fagemo netted the final Ontario goal of the night with a breakaway strike at 8:48 of the third that was set up by Alan Quine and Tyler Madden. Fagemo’s tally was his 10th of the year and gave him a double digit goal total for the third straight season.

San Diego scored twice in a 42-second span moments after Fagemo’s breakaway, but the Gulls never got any closer in the final minutes. Drew Helleson put SD on the board for the first time at 9:28 before Benoit-Olivier Groulx potted the final goal of the evening at 10:10.

Neither team was successful on special teams in the contest, with the Reign penalty kill finishing a perfect 4-for-4 on the night. Ontario ended at 0-for-2 on the man-advantage in the victory. Eriksson Ek stopped 25 shots for the Gulls in a losing effort.

Marco Sturm
On keeping the momentum from Friday’s win
We’ve played these guys back-to-back before and it was similar today. They played their top players for a lot of minutes and the second night they’re usually not always as fresh. That’s where we think we always have the advantage with our full lineup of four lines. That’s what we did today. Guys like Pavlychev and Chromiak scored and that’s what we need.

On the importance of scoring on the power play
It’s important for us because for some reason, we have some trouble scoring five-on-five goals. We do have chances but we just have a tough time finishing those chances. That’s why special teams are more important and it seems like every time we do a good job, we win a hockey game. Moving forward, that has to continue, but I also think we can be better finishing, definitely at five-on-five.

On next week’s two-game trip to Colorado
It’s those kind of games, the last three, that you almost have to win. Now, you’ve also got to show what you can do against the big teams. In Colorado, I think its probably one of the best. I know they’ve had a lot of call ups but they’re still a really good hockey team. We know that. That’s going to be tough. Calgary is coming up too so that’s going to be hard. We haven’t beat them yet. It’s going to be a good test for us and its going to be a big challenge. We need everyone in this locker room to get a few wins out of it.

Aidan Dudas
On what’s been working for the team lately
I think we’ve just been playing more as a team, where everyone’s kind of doing the little things right. I think it just comes down to being willing to work hard. When we don’t work hard, things don’t go our way and we don’t get the bounces. But when we seem to play hard and work hard, we get rewarded more often.

On the progression of the younger players
It’s obviously a step up from juniors or wherever certain guys come from, and I think its just a learning curve every day. You’ve got to be a sponge when its your first year. You’ve got to learn new things. You’ve got to play different ways. The way we play is different that what a lot of guys play coming from juniors or from Europe. It takes a little bit but you can see a lot of the young guys are starting to play with more confidence and speed. It’s a testament to them as well.

On having his parents in attendance
It was great. My mom and dad were here and they hadn’t been to LA. This is my third year here and they haven’t been here yet. It’s been great having them around and obviously it was great to score with them in the building. It was a great feeling.

The Reign open a two-game set in Colorado on Tuesday against the Eagles at the Budweiser Events Center at 6:05 pm PT. After the second game of the series Wednesday, Ontario will return home to host the Coachella Valley Firebirds on Saturday at 6 p.m. inside Toyota Arena.