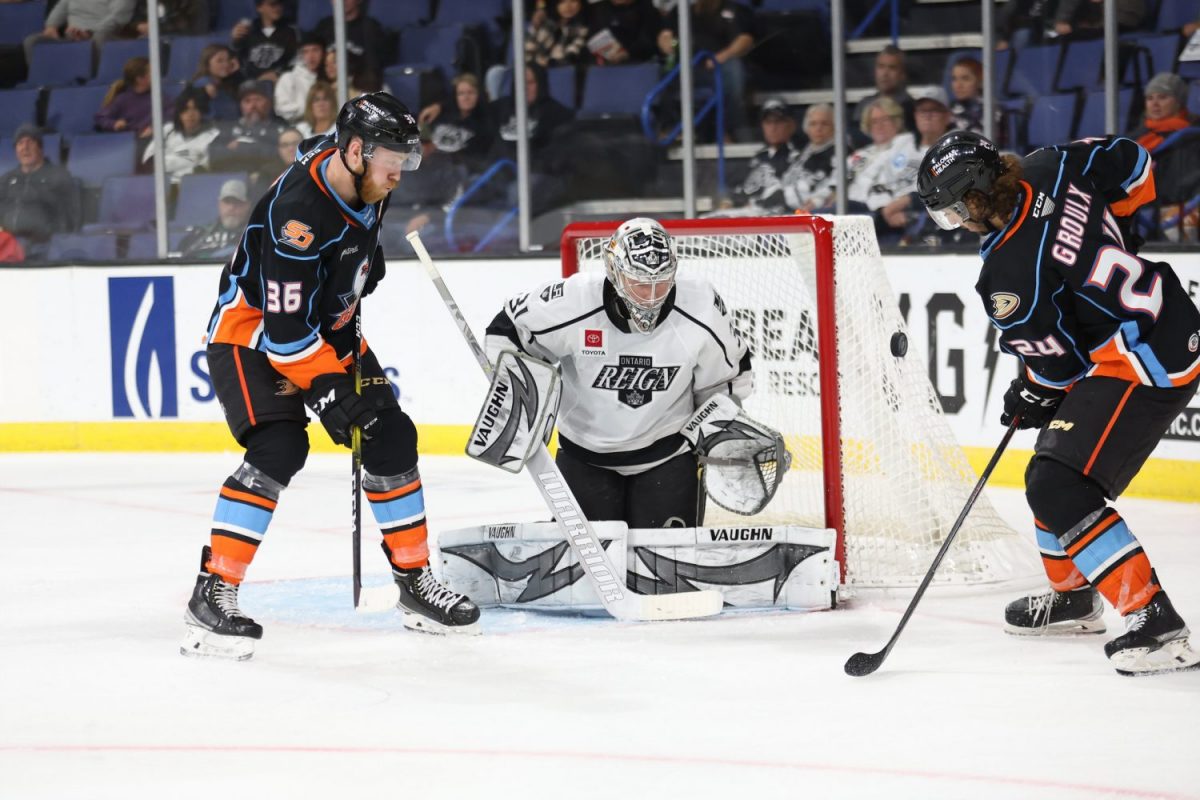 TONIGHT’S MATCHUP: The Ontario Reign and San Diego Gulls renew their rivalry this weekend with a two-game home-and-home series that begins Friday night in San Diego at Pechanga Arena. Friday’s meeting will be the fourth matchup of the season between the clubs, with Ontario taking two of the first three after sweeping a home-and-home during the second week of the campaign Oct. 21-22 before falling 4-1 inside Toyota Arena on Nov. 13.

WHAT TO WATCH FOR: While Ontario is in the middle of the pack with a fifth-place standing in the Pacific Division, the Gulls, who will hit the halfway mark of their year after tonight’s game, sit at the bottom in 10th place with a league-low 11 wins. The Reign have scored an average of three goals per game through their first 31 contests, while offense has been an issue for San Diego who ranks fourth from the bottom of the AHL scoring rankings (2.74). Scoring three power play goals on Wednesday moved Ontario up 20.3% on the man-advantage for the season, while the team’s penalty kill remains strong at 82.9%, which is 7th-best in the league. The Gulls’ kill is just behind at 82.3% (13th).

LAST TIME OUT: Three-point nights for both Lias Andersson and TJ Tynan propelled the Ontario Reign to a 6-3 win over the Henderson Silver Knights on Wednesday night at the Dollar Loan Center. The victory was Ontario’s first-ever winning decision in the building since it opened late in the 2021-22 season and the club tied its highest offensive output on the road this season to secure the result, backstopped by Cal Petersen who turned out 31 shots.

TYNAN’S STAR SHINING BRIGHT: After it was announced that Reign captain TJ Tynan would represent the Pacific Division at the AHL’s All-Star Classic in Laval next month Wednesday morning, the team’s No. 1 center had himself a big night on the ice. Tynan recorded assists on three Ontario power play goals in the team’s win in Henderson, his second-highest single game scoring output during 2022-23. Overall, Tynan’s overall offensive output of 34 points (4-30=34) leads the team and his assist total is tied for second-most in the AHL this season. In addition, the Orland Park, Ill. native has totaled a league-leading 17 power play assists and 19 power play points, which is second to Tucson’s Michael Carcone who was also selected to the All-Star roster and will be one of Tynan’s teammates at the event.

SCOUTING THE GULLS: San Diego has been led on the offensive end by Rocco Grimaldi, who is their only skater averaging a point per game with 35 points in 34 contests on 14 goals and 21 assists. Center Benoit-Olivier Groulx has also pitched in with 22 points on eight goals and 14 helpers while suiting up for all in 35 of the team’s games. Defender Nikolas Brouillard has remained heavily involved on the offensive end and is second on the club with 28 points (6 goals, 22 assists) while also appearing in all of the Gulls’ contests. Glenn Gawdin, who has earned himself playing time in Anaheim this year as well, ranks second on the team with nine goals and has collected 14 points in 20 outings. Lukas Dostal has been the team’s rock in net, posting a 2.69 goals-against average and a 0.923 save percentage in 24 appearances.

CHROMIAK HEATING UP: Martin Chromiak followed up his first AHL goal Sunday afternoon with an assist on a goal by defenseman Tobie Bisson Wednesday in Ontario’s win in Henderson. The winger has now registered five points in 15 contests for the Reign during his rookie professional season. The Ilava, Slovakia native was selected by the LA Kings in the fifth round of the 2020 NHL Draft and starred for the Kingston Frontenacs in the Ontario Hockey League (OHL) during two junior seasons that saw him total 119 points in 88 games on 55 goals and 64 assists. Chromiak originally made his AHL debut at the conclusion of the 2021 season when he appeared in two contests with Ontario.

MORE OF MADDEN: Tyler Madden ended a long scoring drought when he cashed in on the power play during the second period last Friday vs. San Jose and hasn’t stopped scoring since, registering a shorthanded strike on Sunday in a win at Coachella Valley and a quick tally just 3:35 into the first period of Wednesday’s eventual victory over Henderson. Madden had previously gone 13 straight games without finding the back of the net, the longest stretch of his professional career. Prior to Friday’s goal that broke him out of the slump, Madden’s last tallies came during a three-game goal stretch that went from Nov. 19-23. The Deerfield Beach, Fla. native has made his living against the Silver Knights and Barracuda, with seven of his eight goals coming against those two division foes this season.

PERKS OF PETERSEN: Six weeks into his stint with Ontario, goaltender Cal Petersen has appeared in 11 games for the Reign, producing a 6-5-0 record along with a 2.64 goals-against average and a 0.917 save percentage. The netminder started out hot, recording wins in four of his first five outings including a shutout performance against Bakersfield on Dec. 17. Petersen’s busiest night thus far came in Tucson on Dec. 9 when he turned out 44 shots in an overtime victory over the Roadrunners. Most recently he’s earned back-to-back victories in road wins over Coachella Valley (30 saves) and Henderson (31 saves). The native of Waterloo, Ia. has seen action in 127 AHL contests during his career and has posted an overall save percentage at 0.905 during parts of four campaigns.