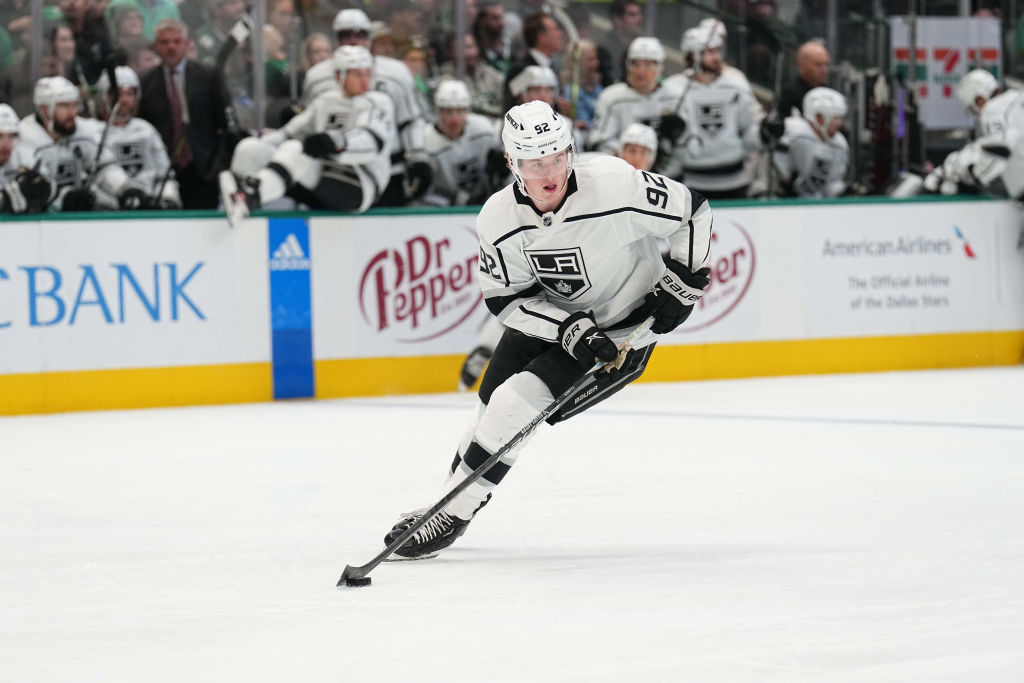 Adding some context today to a couple of roster moves announced by the team a few days prior, which included forward Trevor Moore and defenseman Brandt Clarke. To start with Moore, Blake deemed both he and forward Arthur Kaliyev “week-to-week” at this time, which adds a bit more clarity to that situation. Both players are on injured reserve, and we’ll circle back to their status a bit later on.

Regarding Clarke, that’s where the bulk of the conversation landed.

Clarke has had quite the path this season and as Blake shared yesterday evening, the path he took was the plan all along from the Kings’ perspective. Clarke’s performance during training camp was strong enough to where he earned the opportunity to open the season on the NHL roster with the Kings. From a developmental standpoint, the organization also wanted to give Clarke a taste of what the league requires from a day-to-day standpoint. Things went according to plan for the Kings and that next step forward will be a return to the OHL.

“We’ve kind of had that plan all along,” Blake shared last night. “We wanted get him a little bit of the habits of the NHL early on in the season. I thought he had a really good camp coming out and he earned the right to be here and go through that. He took his conditioning stint in the American League well and then he went and did a really good job at the World Juniors and helped that team win gold. Now he’s got to continue that in Barrie.”

The Kings had several upper-management individuals in attendance at the World Junior Championships to watch Clarke, as well as Kenny Connors and Otto Salin, plus the opportunity to scout potential 2023 draft-eligible players.

Clarke’s output during the tournament was high, as he was tied for third amongst all defensemen in scoring with eight points. He scored in the semifinals against the United States and collected two assists in the gold-medal game against Czechia, including a helper on the game-winning goal in overtime. Blake said the reports he received were that Clarke’s best games came in the knockout stage, improving as the tournament went on and the stakes got larger.

“Marc Bergevin just got back, Glen Murray and Matt Greene were there, they thought his last games were his best games,” Blake said. “He really settled in. They played him a lot, he had a big role on that team and I thought he did tremendous work there.”

Clarke has played 21 competitive games, split between the Kings, Reign and Team Canada, on top of 12 exhibition games at a variety of different levels. The Kings have 39 games left and as Blake noted, the team is rolling pretty well as of late and from a health standpoint, so fa, the team has had their full complement of defensive options available.

“We needed him to play a certain amount of games and now we’re down under 41 games [remaining for the Kings],” he said. “The team’s been going pretty good, knock on wood, health-wise so a lot of that does factor in.”

Blake noted that the team is aware of Clarke’s contract status, with regards to the nine games he’s played before a year of his entry-level contract would kick in, and potentially another deadline that could have come down the road, but he downplayed the importance of those with regards to this particular decision, shifting the focus mainly to what the Kings need and what Clarke needs.

You can’t overlook those markers, and the fact he stopped at nine games before the series of events that followed is something, but it also didn’t sound like it would have prevented Clarke from staying up, should the Kings have felt it would have been the right decision for both player and team. Nor would it prevent Clarke from potentially returning later on if circumstances aligned.

The other factor in play with regards to Clarke is the fact that the Kings have several right-shot defensemen in the fold already, many of whom come with the same type of game as Clarke. With Sean Durzi and Sean Walker already on the NHL roster – a pair of offensive-minded, right-shot blueliners – as well as Jordan Spence waiting in Ontario as one of the best defensemen in the American Hockey League, the Kings are loaded in that area.

“We do [have that] and I think we’ve been fortunate on that front,” Blake said. “We got Spence some games over the last couple of weeks and just understanding that we want [Clarke] to play a lot of games here in the next couple of months, we felt Barrie was the best spot for that.”

Looking ahead for Clarke specifically, his OHL club is currently firmly in a playoff position as of this writing and rumor has them looking to add at the trade deadline.

Should a lengthy playoff run not develop, however, Blake left the door open to Clarke rejoining either the Kings or the AHL’s Ontario Reign later in the season. He’ll be in the OHL until his team concludes its season, but from that point on, the Kings could work him back into the fold at either the NHL or AHL level, depending on where they best see him fitting in. With an expanded AHL playoff field, the Reign are likely to play at least in the preliminary round and the Kings sit in a good spot as of today.

“As soon as his season’s done, he’s going to join whether it’s us or Ontario,” Blake added. “He’s basically been instructed, you do your job with Barrie right now – we’ll see whatever they do here before the deadline, but they’ve got a pretty good team – but you can go and you can lead that team. Then, he’s going to be back up and getting more of the experience that he had.”

With regards to the Kings, as noted, part of the reason Clarke was less likely to stick around had to do with his handedness and the fact that he shoots right on a team that, if anything, would prefer to land a left-shot defensemen. Blake admitted that in an ideal world, he’d like to have three left-shot defensemen and three right-shot defensemen, but the development of certain players have put the team in an imbalance, with guys like Durzi, Spence and Clarke pushing for NHL minutes.

Now, Blake feels that the league is approaching a point in the season where things are starting to shake out a bit more clearly with regards to potential buyers and sellers. Should it be at that position, or any position, that process starts to become clearer now.

“A lot of that starts taking place now, when you come back out of this break, around the halfway mark, you start to separate some teams that are in and out of the playoffs,” he added. “Then, you start to understand kind of what might be available.”

For the Kings, they oped not to practice today, in advance of another big divisional showdown against the Edmonton Oilers tomorrow evening on home turf. Morning skate coverage to follow here on LAKI in the AM!