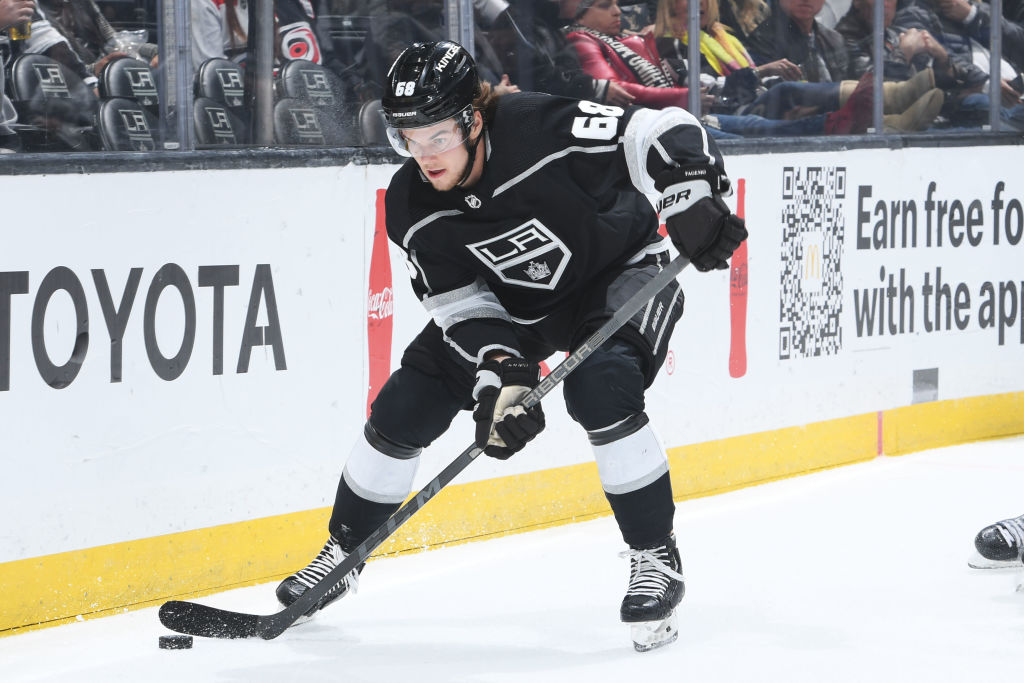 It appears that so far, Samuel Fagemo is seizing an opportunity. The Swedish forward has picked up a point in each of his two appearances with the Kings over the past week, scoring both the first goal and assist of his NHL career.

This isn’t the first chance Fagemo has had with the team that drafted him in the second round in 2019. He made his NHL debut almost a year ago last January and although he featured on the team’s top line in his second game alongside, Anze Kopitar and Alex Iafallo, the group wasn’t able to produce offensively. Eventually, Fagemo was moved down the lineup, and after four games he was sent back to the AHL with the Ontario Reign.

Another opportunity came during training camp in September. With Victor Arvidsson rehabbing after offseason surgery, Fagemo saw time with Kings regulars Phillip Danault and Trevor Moore, but for whatever reason, things didn’t click for him and the 22-year-old opened the 2022-23 season in the AHL.

With the Kings looking to change their lineup after a 9-8 loss to Seattle at the end of November, they inserted both Fagemo as well as defenseman Tobias Bjornfot for the first time this season. Both played well and helped LA to a 5-3 win over Arizona, but Kings head coach Todd McLellan had very high praise for Fagemo specifically.

The highlight of his game was an assist Fagemo had on a goal by Carl Grundstrom late in the second period that tied the game, erasing a two-goal deficit the Kings faced earlier in the period. Fagemo was quick in his decision making along the wall to spring Grundstrom the other way on a 2-on-1, which he kept himself and buried for the goal, which led to Fagemo’s first NHL point.

Earlier in the day, McLellan mentioned he was underwhelmed by what he saw from Fagemo a few months ago in training camp.

“We were really hoping he’d be here full-time,” he said. “He didn’t have the camp that we anticipated he would and I’m sure for him too so hats off to him for having an impact.”

Thursday’s performance earned Fagemo another look two days later against Carolina on Saturday, where he broke through to score his first NHL goal during the third period. It was an eventful frame for the forward, who first hit the post on a breakaway opportunity before burying his second grade-A look minutes later.

“I felt bad for him on the one that he had earlier when he hit the post,” McLellan said. “It was that close. Sammy’s arrived and I thought he had a good, strong game. It was great to see our bench; we were losing, but they’re really excited for him so that’s the sign of a good close team.”

Now that he’s arrived, the challenge for Fagemo is to continue to produce in a different role than he’s used to. A pure shooter, it’s a safe bet that he’s almost always been featured on one of his team’s top lines with plenty of minutes and opportunity. During his three seasons with Ontario, Fagemo has been a mainstay among the team’s top scorers, piling up 27 goals last year and another six this year among eight points in 15 games.

But with the Kings, at least to start, the return of Iafallo to the lineup on Tuesday has all of the team’s top nine forwards intact together. Fagemo will most likely be confined to a fourth line spot for the foreseeable future when he does the the opportunity to play. It’s a challenge he believes he’s ready for.

“I think it’s really important to learn and adapt to that role,” Fagemo said. “I think I can do both the roles well so I’ve just got to be focused on doing my role as well as I can.”

Marco Sturm, Fagemo’s head coach in Ontario, is familiar with what he’s going through, having been on the other end of things for the last four seasons as an assistant coach with the Kings who was working primarily with the team’s forwards.

Sturm mentioned that he can see Fagemo being a good fit on the fourth line because of how hard he works, combined with his level of skill.

“He cares and he competes every night,” Sturm said. “Everyone catches that and that’s why players deserve to be up there. Having that role on the fourth line and just having a working mindset coming into it with the big boys, maybe that’s something they needed so that’s why it was the right choice.”

When asked what the biggest difference might be for a player like Fagemo in his new role, Sturm said that at the NHL level, mistakes aren’t tolerated the same way they might be in the AHL.

“You’re just not allowed to have too many mistakes in a game,” Sturm said. “It’s not like the AHL, where there’s a lot more mistakes taken from everyone, it doesn’t matter who it is. Up there, not so much. Those little mistakes could cost you a goal and maybe even an entire game too. Players still have to play their own way, they’re going to work hard and we know that, but they’ve got to be smart, try not to make too many mistakes and keep it simple.”

McLellan also spoke about the difficulty for some players about the change in roles when they first get to the NHL, saying that even a player like Connor McDavid didn’t come in as a dominant offensive force and steal a job away from a veteran right away when he started in Edmonton.

“It’s one of the most confusing things that all players have,” McLellan remarked. “You have to have a ‘B’ game that you can bring, because the odds of you scoring and being real effective offensively right off the bat night after night aren’t as great as they would be if you played against teenagers.”

Fagemo’s game isn’t a finished product, but he has shown the ability to both finish around the net and stay committed on the defensive side of the puck. Last season in Ontario, he added penalty killing to his arsenal, knowing that it might be a way for him to carve out a bigger role whenever he got his chance at the highest level.

After scoring on Saturday, Fagemo made this week’s trip East with the Kings but didn’t draw into the lineup for Tuesday’s win in Ottawa. Whenever he gets his next chance, his confidence will be even higher knowing that he’s performed well in his first two appearances. This time around, he’s more comfortable with his surroundings and the system.

“I think here I’ve just got to stay focused for every shift and opportunity I get on the ice,” Fagemo said. “That’s the biggest thing for me.” 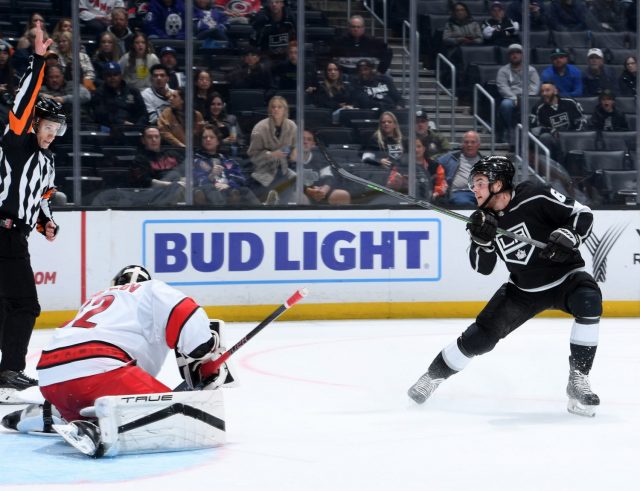 By Zach Dooley
17 Comments
Behind the Scenes

10 Days Of Dustin – The Milestones

Insiders, presenting 10 Days of Dustin! Over the next 10 days, we'll have a Dustin Brown themed post each day, leading

By Zach Dooley
195 Comments
Behind the Scenes