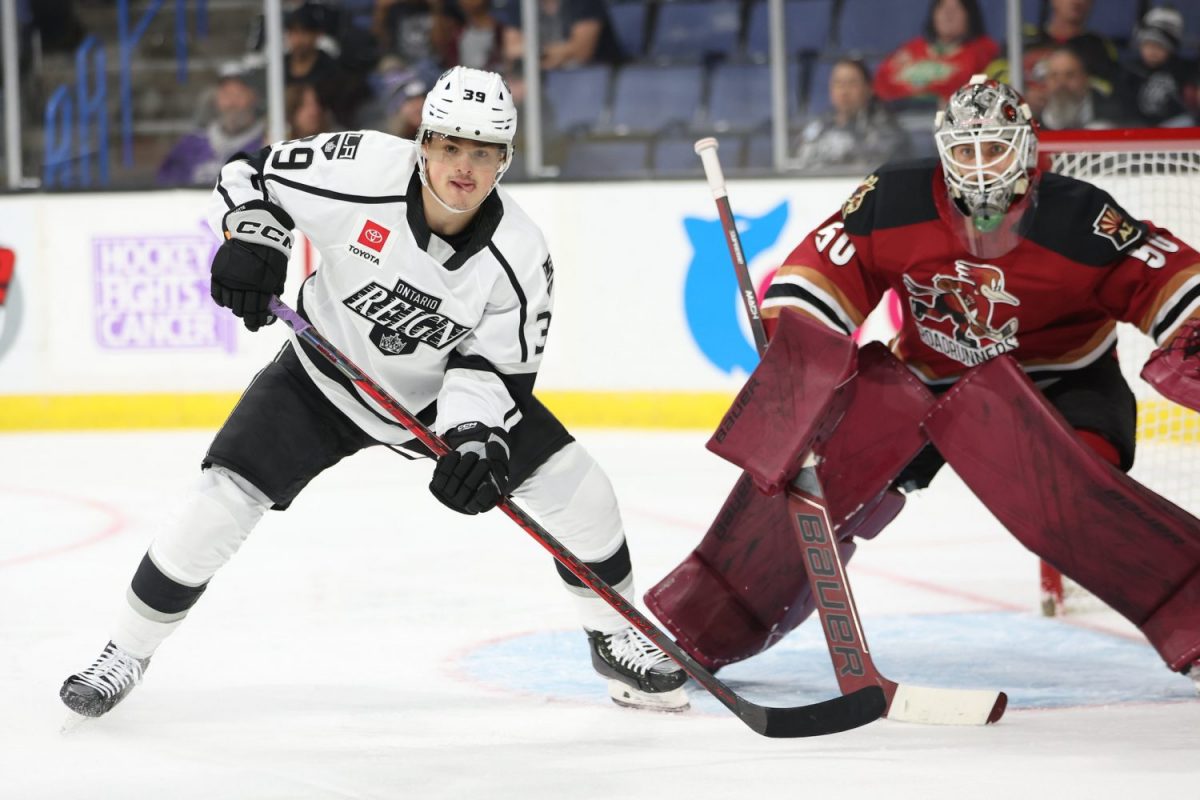 TONIGHT’S MATCHUP: The Ontario Reign open a two-game weekend series in Tucson against the Roadrunners Friday night at the Tucson Convention Center. Ontario is coming off a 3-1 loss to Henderson on Wednesday in the finale of a seven-game homestand, the longest consecutive run of contests this season at Toyota Arena. The two teams split their only two matchups of the season two weeks ago in Ontario with Tucson securing a 3-1 decision on Nov. 26 before the Reign bounced back with a 4-3 win the following afternoon. Ontario comes into the contest in a tie for third place in the Pacific Division with 25 points, while the Roadrunners are in seventh with 22 points.

WHAT TO WATCH FOR: The Reign have opened the month with three consecutive games featuring goaltender Cal Petersen in between the pipes after being loaned to the team by the LA Kings. With his play leading the way, Ontario has continued to be a top team in the league defensively, currently ranking third in the AHL by conceding just 2.50 goals per game. The Reign have also been at their best when getting out to a lead, posting a 11-0-1 record this season when holding an advantage after 40 minutes. While they have a winning record, Tucson ranks in the middle of the pack on both offense and defense, scoring an average of 3.11 goals per game (15th) while allowing 3.21 tallies per contest (19th).

LAST TIME OUT: The Henderson Silver Knights used two shorthanded goals to get past the Ontario Reign Wednesday night at Toyota Arena by a 3-1 score. Cal Petersen made the start for Ontario and kept his team in the game, stopping 26 shots in a losing effort. The lone goal for the Reign came from captain TJ Tynan on the power play late in the third period. Henderson’s Laurent Brossoit earned the first star on the night, keeping Ontario off the scoreboard until the final minutes with 30 saves.

TYNAN TURNS UP: Reign captain TJ Tynan has increased his offensive output recently, posting five points in his last four games on a goal and five assists. The center had back-to-back games in which he recorded a pair of assists in wins over Tucson and Colorado Nov. 27 and Dec. 2 before scoring his second goal of the season on the power play Wednesday night against Henderson. Tynan leads Ontario with 21 points this season (2-19=21) while his assist total ranks as the fourth-most in the AHL.

SCOUTING THE ROADRUNNERS: Tucson has been led offensively by returning forward Michael Carcone, who is in the top 10 of AHL scorers with 24 points in 18 games on seven goals and 17 assists. The attacker also leads the team with 13 power play points and is second with 39 penalty minutes. Center Jean-Sebastien Dea has posted 11 goals which ranks first among all Roadrunners skaters, while Laurent Dauphin has made an impact with 16 points in 17 games (six goals, 10 assists). Defender Cam Dineen leads the club’s blueliners with 11 points, which have consisted of a goal and 10 helpers. In net, Ivan Prosvetov has led the way with six wins in 12 appearances while posting a 2.94 goals-against average along with a 0.909 save percentage. Veteran Jon Gillies has also seen action in eight games and has a record of 4-3-1.

PETERSEN TAKES THE REINS: Since being loaned to Ontario at the start of the month, goaltender Cal Petersen has picked up where he left off when he was last with the Reign during the 2019-20 season. In each of his first two appearances, Petersen stopped 27 shots while backstopping Ontario to a victory. He was named the first star of the game last Friday in a 3-1 win over Colorado, turning aside all 13 shots he saw in the third period to preserve the win. Petersen also picked up a win in the team’s triumph against Bakersfield on Sunday when he faced 29 shots. In 176 minutes of action over three contests, the netminder has a 1.70 goals-against average and a 0.941 save percentage.

BYFIELD GETS TRICKY: It was a big night for Quinton Byfield Sunday, who led the Reign over Bakersfield by scoring three times. His first strike came just 31 seconds into the action when he camped out at the side of the net for a pass from Lias Andersson who was behind the cage. The 20-year-old added to Ontario’s lead at 6:13 of the second when Tyler Madden led him into the offensive zone on a rush and he used a cross-body wrister to put the puck over goaltender Ryan Fanti. With the Reign forced to kill a penalty while holding a lead in the third, Bakersfield brought an extra skater on the ice. But Byfield helped chip the puck out of the Ontario zone and then won a race to the empty net to complete his first hat trick with a shorthanded strike. Byfield leads the Reign with seven goals in 10 AHL games this season along with a total of 11 points after adding an assist on TJ Tynan’s third period power play goal Wednesday night.

FINDING SUCCESS AT THE START: The Reign have been at their best when they score the opening goal this season, posting a 9-0-1 mark in the 10 contests they’ve found the back of the net first. Ontario has also been a perfect 7-0-0 in games when they’ve held a lead after one period of play and 11 of the club’s victories have come with a lead after 40 minutes of play.