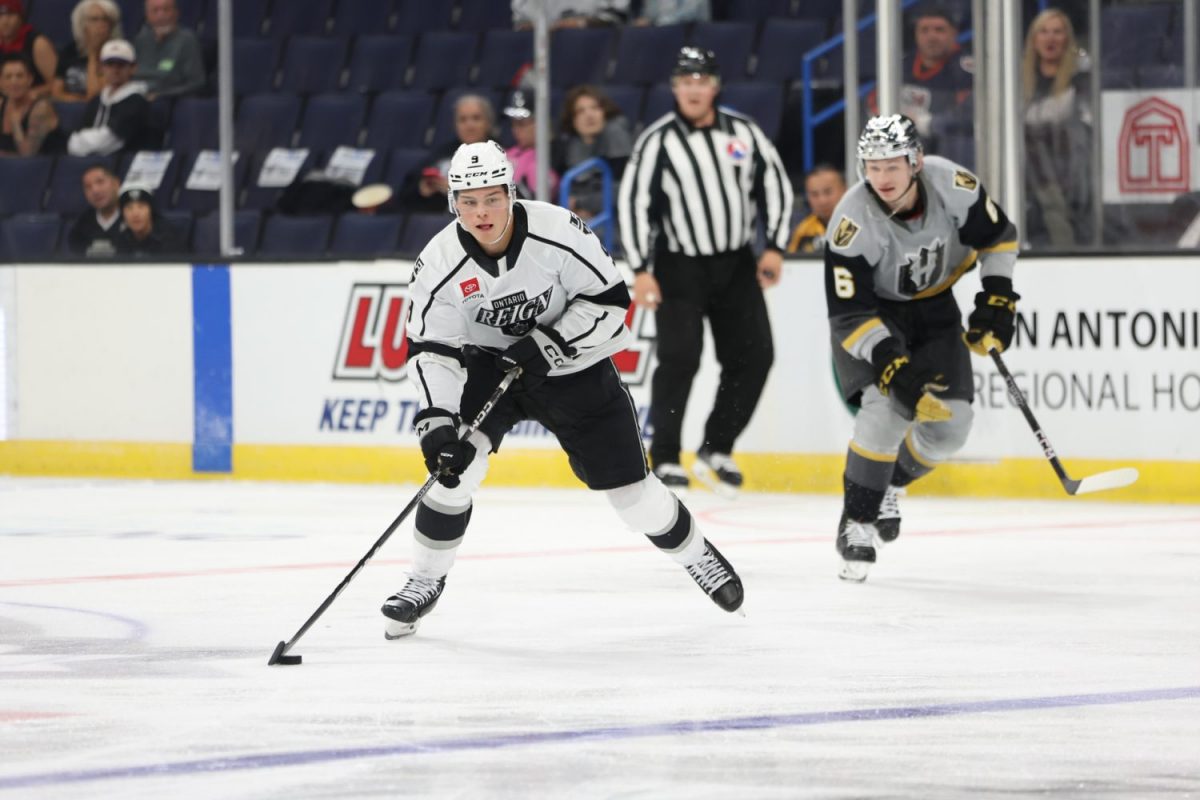 TONIGHT’S MATCHUP: The Ontario Reign cap off their seven-game homestand Wednesday night when they host the Henderson Silver Knights at Toyota Arena for the fourth meeting of the season between the two Pacific Division clubs. Ontario has won two of their first three matchups against the Silver Knights, winning 5-3 on Oct. 18 before splitting a home-and-home weekend three weeks ago by losing 3-1 in the opener and bouncing back for a 3-2 victory the following afternoon. The Reign are in possession of third place in the Pacific coming into Wednesday’s contest with 25 points, while Henderson sits in ninth with 13 points accrued.

WHAT TO WATCH FOR: The Reign have won five of their first six contests during the recent play at home, including back-to-back victories last week over Colorado on Friday and Bakersfield on Sunday to open the month of December. Ontario has continued to be a top team in the league defensively, currently ranking third in the AHL by conceding just 2.47 goals per game. The Reign have also been at their best when getting out to a lead, posting an 11-0-1 record this season when holding an advantage after 40 minutes. While the Silver Knights have struggled offensively, scoring just 2.45 goals per game from their first 22 contests, they allow an average of just under 29 shots per night, which is the fifth lowest in the AHL. Henderson has also been impressive on the penalty kill, discarding 86.1% of opponents’ man-advantages which is the second-best rate in the league.

LAST TIME OUT: Quinton Byfield’s first professional hat trick powered the Ontario Reign to a 5-2 win over the Bakersfield Condors Sunday night at Toyota Arena which also featured 27 saves from goaltender Cal Petersen in between the pipes. Two of Ontario’s five goals came shorthanded, including a penalty shot strike by Rasmus Kupari. Frederic Allard also scored his first goal of the year in the third period to extend the Reign lead and Cameron Gaunce had his first multi-point effort of the season with two assists.

BYFIELD GETS TRICKY: It was a big night for Quinton Byfield Sunday, who led the Reign over Bakersfield by scoring three times. His first strike came just 31 seconds into the action when he camped out at the side of the net for a pass from Lias Andersson who was behind the cage. The 20-year-old added to Ontario’s lead at 6:13 of the second when Tyler Madden led him into the offensive zone on a rush and he used a cross-body wrister to put the puck over goaltender Ryan Fanti. With the Reign forced to kill a penalty while holding a lead in the third, Bakersfield brought an extra skater on the ice. But Byfield helped chip the puck out of the Ontario zone and then won a race to the empty net to complete his first hat trick with a shorthanded strike. Byfield leads the Reign with seven goals in 10 AHL games this season along with a total of 10 points.

SCOUTING THE SILVER KNIGHTS: The AHL affiliate of the NHL’s Vegas Golden Knights, Henderson has had a slow start to the 2022-23 season by recording just six wins from their first 22 games. Former Reign forward Sheldon Rempal is tied for the team lead in scoring with 14 points on six goals and eight assists alongside Jonas Rondbjerg’s club-high seven goals (7-7=14) and Byron Froese’s 11 assists (3-11=14). Gage Quinney has also chipped in with 12 points on five goals and seven assists. Defender Daniil Miromanov leads the team from the back end with 13 points on six goals and seven assists but was recalled by Vegas at the start of the month. Blueliner Peter DiLiberatore returned to the club in his place and has suited up in four games for HSK this season. In goal, Jiri Patera has appeared in 11 games to begin his third season with Henderson, posting a 4-6-0 record with a 3.03 goals-against average, while veteran Michael Hutchinson has played in five contests and Laurent Brossoit has seen time in eight games since returning from an injury.

PETERSEN TAKES THE REINS: Since being loaned to Ontario at the start of the month, goaltender Cal Petersen has picked up where he left off when he was last with the Reign during the 2019-20 season. In each of his first two appearances, Petersen has stopped 27 shots while backstopping Ontario to a victory. He was named the first star of the game on Friday in a 3-1 win over Colorado, turning aside all 13 shots he saw in the third period to preserve the win. Petersen also picked up a win in the team’s most recent triumph against Bakersfield on Sunday when he faced 29 shots. In 120 minutes of action last week, the netminder had a 1.51 goals-against average and a 0.947 save percentage.

HOME COOKIN’: In the 12 contests Ontario has played inside Toyota Arena during 2022-23 the team has posted outstanding results on the power play, scoring 14 times. After going 2-for-3 in their win last Sunday over Tucson, the Reign found the back of the net two more times on Friday against Colorado. Overall, Ontario is now 14-for-46 on the power play at home for a percentage rate of 30.4% which ranks as the fourth-highest mark in the AHL.

ALLARD ANNOUNCES HIS PRESENCE: Defender Frederic Allard netted his first goal of the season Sunday, blasting a shot from the point off a faceoff win in the offensive zone to extend Ontario’s third period lead. The goal gave Allard points in consecutive games after he produced an assist on a goal by Alan Quine Friday night in a Reign win over Colorado. While starting his campaign with an injury sustained during the preseason, Allard has three points in seven contests with a plus-2 rating for Ontario so far this year.