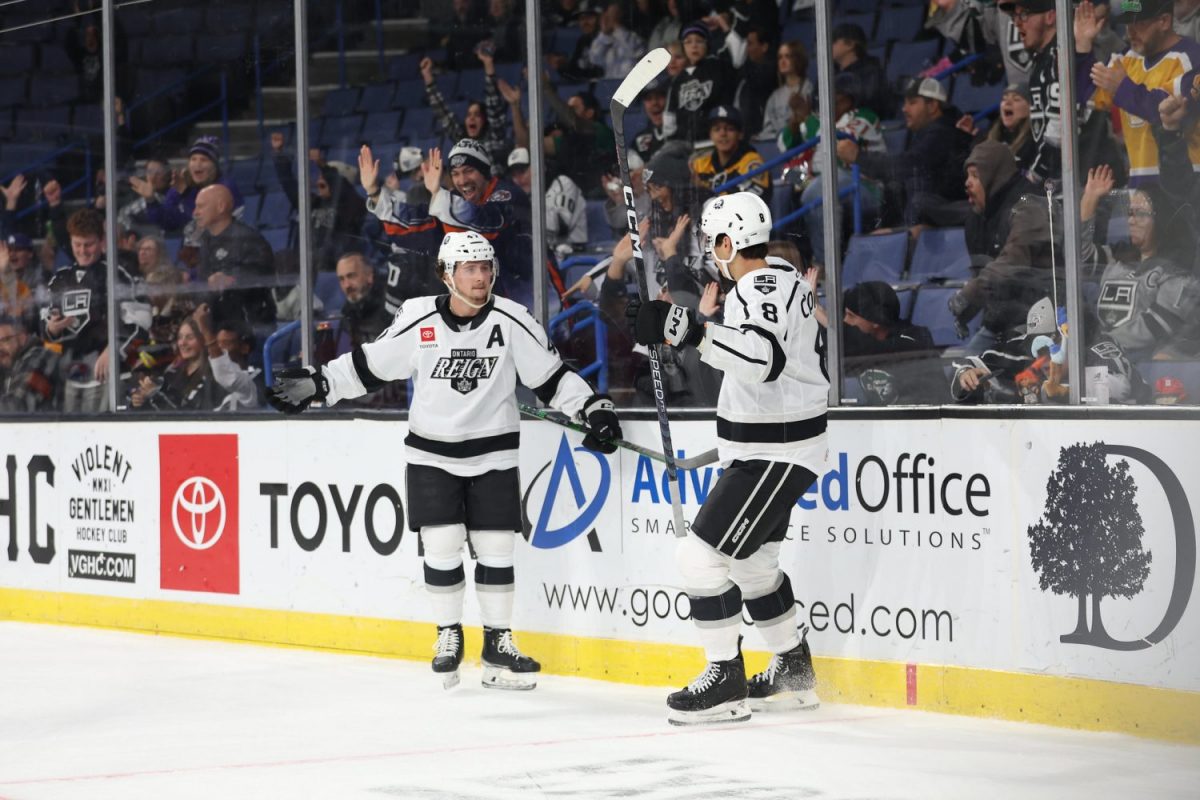 TONIGHT’S MATCHUP: Just like they did in November, the Ontario Reign open up their December schedule with a matchup against the Colorado Eagles. This time the teams are in Ontario for the battle as opposed to Loveland, Colo. While the Reign won the month-opening contest in shutout fashion with a 2-0 win, the Eagles responded two nights later with a 7-3 decision. Colorado has been the hottest team in the AHL since that weekend, posting a 9-0-1 record in the 10 games since Ontario’s visit to take over first place in the Pacific Division standings.

WHAT TO WATCH FOR: After going through a dry spell in the middle of November, the Reign won three of their last four to close the month and are looking to continue their success in the new month. Ontario has continued to be a top team in the league defensively, currently ranking fourth in the AHL by conceding just 2.59 goals per game. The Reign have also been at their best when getting out to a lead, posting a 9-0-1 record this season when holding an advantage after 40 minutes. Colorado has also found success on the defensive side of the puck, ranking second in the league with an average of 2.32 goals allowed per game. The Eagles hold an 8-0-0 record when leading after the first period and a 10-1-1 mark when they outshoot their opponent. Colorado has struggled on special teams, ranking 24th in the AHL on both the power play (17.7%) and penalty killing (75%) percentage.

LAST TIME OUT: Quinton Byfield led the way with a pair of goals as the Ontario Reign bounced back to earn a split of their weekend series against the Tucson Roadrunners Sunday afternoon with a 4-3 win. The victory was Ontario’s 10th of the 2022-23 season. Byfield finished with two goals and an assist, including the game-winner in the third period, while his linemate Alex Turcotte scored his first goal of the year while adding an assist on the deciding goal. Goaltender Matt Villalta also had a solid night in the crease, stopping 33 shots to pick up his fourth win of the season.

BYFIELD’S BIG WEEK: Forward Quinton Byfield led all Reign skaters last week, racking up five points in the team’s three games at Toyota Arena. The 20-year-old picked up three assists last Wednesday, helping on goals by Samuel Fagemo, Tyler Madden and Jordan Spence in a defeat of San Jose. Byfield then struck twice in Sunday’s win over Tucson, putting the puck between his legs to score a highlight-reel power play goal in the second period before tacking on an insurance goal during a 2-on-1 rush that turned out to be the game-winner for Ontario. It was the first two-goal game of the Newmarket, Ont. native’s AHL career. In eight games with the Reign this season, Byfield has seven points on four goals and three assists.

SCOUTING THE EAGLES: The AHL affiliate of the NHL’s Colorado Avalanche, the Eagles have seen a lot of movement between the two levels early this season, with multiple players finding roles at the highest level with the defending Stanley Cup Champions. Currently, defenseman Brad Hunt leads the team with 17 points in 19 games from the back end on four goals and 13 assists. Forward Charles Hudon has made a big impact up front in his first year with the Eagles, posting 15 points in 18 games on eight goals and seven assists. Winger Callahan Burke has scored five goals and nine points for Colorado, while Mikhail Maltsev, Oskar Olausson and Alex Beaucage have also equaled the nine point total. In goal, Justus Annunen and Jonas Johansson have both had success while splitting time evenly between the pipes. Johansson has a 6-3-0 record in nine appearances with a 2.01 goals-against average while Annunen earned a 7-2-1 record in 10 contests with a GAA of 2.39.

TURCOTTE TIME: Forward Alex Turcotte had multi-point efforts in both of Ontario’s wins last week, accounting for two assists last Wednesday before scoring a goal and an assist on Sunday. The goal was Turcotte’s first of the season in his eighth game since returning from injury. The Island Lake, Ill. native also posted a plus-4 rating in the team’s three games a week ago. Overall in 67 career AHL contests with the Reign, Turcotte has 44 points on 13 goals and 31 assists.

HOME COOKIN: In the 10 contests Ontario has played inside Toyota Arena during 2022-23 the team has posted outstanding results on the power play, scoring 12 times. After going 2-for-3 in their most recent win on Sunday over Tucson, the Reign are now 12-for-35 on the power play at home for a percentage rate of 34.3%. That number ranks as the third-highest mark in the AHL behind Toronto and Rochester, who have played seven and nine home games this season respectively.

DEVIL IN THE DUDAS: Forward Aidan Dudas scored his sixth goal of the season during the first period of Saturday night’s game to reclaim the title of Ontario’s leading goal scorer. The Parry Sound, Ont. native has also amounted to a plus-five rating on the season, which ranks in a tie for third highest on the club. Dudas’ six goals have all come in different games this year. In his three professional seasons, the attacker has never scored more than once in a game, with his 22 tallies all coming on different days. Dudas is more than halfway to his career-high in goal scoring, which was set last season when he netted 10 in 61 contests.