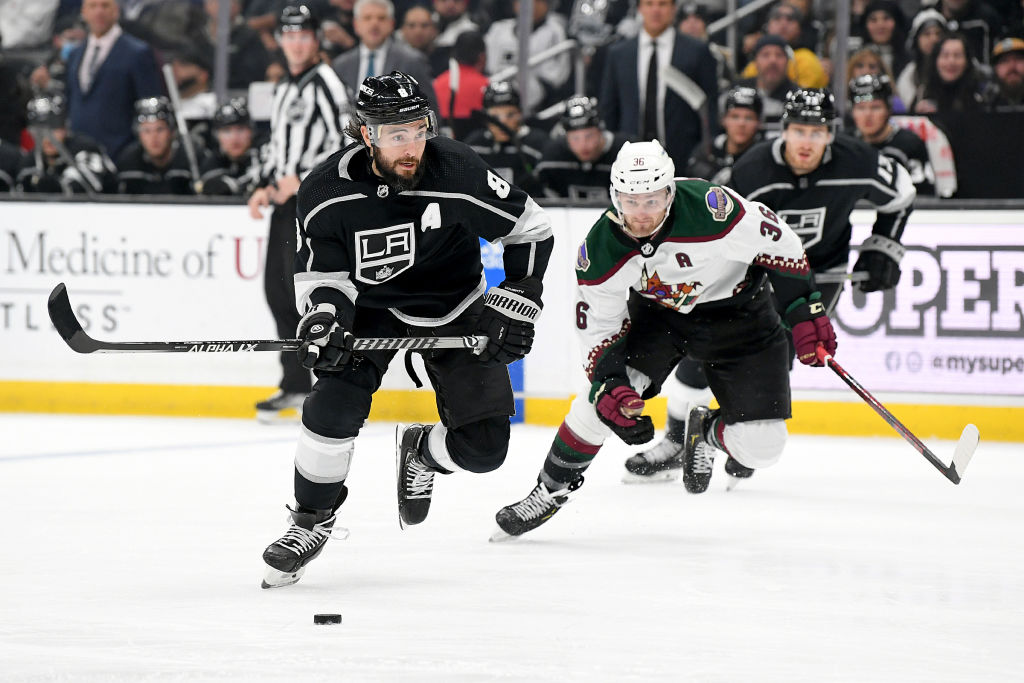 The LA Kings extended their point streak to four games as they won for the first time on a four-game homestand, with a 5-3 victory over the Arizona Coyotes on Thursday evening.

Forward Anze Kopitar led the charge with two goals tonight, one of 12 Kings with at least one point on the evening. Forward Samuel Fagemo collected the first point of his NHL career with an assist in the second period.

Arizona opened the scoring with a shorthanded goal midway through the first period to take a 1-0 lead. After a disconnected pass at the blueline, Fischer won the race the other way and buried a breakaway to put the Coyotes on the board with his fourth goal of the season.

The Kings answered right back, however, to tie the game at one on the same power play. Forward Kevin Fiala fed teammate Gabe Vilardi in the slot, where he showed great poise to find Kopitar in the right-hand circle for the one-timer and the goal. Kopitar’s tally was his sixth of the season, with three goals from his last four games.

The Coyotes scored twice in just over two and a half minutes to open up a 3-1 advantage early in the second period. First, former Kings defenseman Troy Stecher sent a shot from the point through traffic and in to put his new team ahead. An unfortunate break, as Alex Edler lost his skate blade in the corner, led to the third goal, as Nick Bjugstad got open at the back post to bury a feed from Dylan Guenther for a 3-1 advantage.

The hosts surged back, however, with a pair of goals before the intermission to knot the score at three through 40 minutes. First, on the power play, forward Viktor Arvidsson fed Trevor Moore in front, where he redirected the puck past Arizona netminder Karel Vejmelka for his seventh goal of the season. With less than two minutes on the clock, forward Carl Grundstrom tied the game off the rush, following an excellent play along the wall by Fagemo, who collected his first career NHL point with the primary assist.

5:22 into the third period, the Kings took their first lead of the game as Kopitar buried his second goal of the contest. The captain danced around a defenseman off the rush, down the right wing and snapped his shot past Vejmelka for his seventh goal of the season. Defensemen Drew Doughty and Tobias Bjornfot tallied the assists on the play, Bjornfot’s first point of the season.

Inside the final two minutes of play, forward Kevin Fiala found the empty net to seal the deal, with Adrian Kempe netting the primary assist.

Anze Kopitar
On his takeaways from tonight’s win
I thought our energy was there right off the start, it was a bit of a test in the second period where we went down by two goals and we came back. Going into the third period, being tied and being able to play the hockey that we want to play, stingy and tight, not giving up a whole lot, that was a great third period for us.

On his scoring tonight and the recent scoring of his line
You’re trying to play hard every night and tonight, it happened. I’ve been feeling pretty good these last few games, I thought our line throughout the last 5,6 games, we’ve been creating quite a few chances, just not necessarily cashing in on a whole lot of them. Tonight, it kind of opened up and we’re going to need more of the same going forward.

On the team’s defensive effort and the play of Jonathan Quick
We played solid hockey, from our crease out. I thought Quickie made some big stops when he needed to and we were able to not give up a whole lot, so he didn’t have to stand on his head, but when we needed him he was there.

On having two power-play units going at the same time
I mean, it’s always huge. We’ve talked about this over the course of however many years, special teams are always big. Whether it’s the start of the season or finishing up and trying to get a playoff spot. Minus the shorthanded goal, we did a good job tonight.

Todd McLellan
On his take on the third period tonight, and the win overall
I thought it was maybe more of the second period that set us up for the third. Going down by two wasn’t a comfortable feeling, yet how we got to it, I thought there was a missed call on the faceoff for interference on Mooresy and then Edler loses a steel in the corner, we’re down a player and can’t recover. So, strange scenarios that right now with our team could push us one way or the other and I thought that the end of the second, coming back, set us up for the third, but we handled the third well. We were patient, we didn’t play out of our skin to try and win, we played in our skin to do it. You knew they were going to have a push near the end and we defended pretty well.

On the response of the group tonight to how things have played out over the last 48 hours
Yeah, you know, if we didn’t respond, if the effort wouldn’t have been there, then you’d be concerned. The effort was there. It still maybe wouldn’t have went our way, but it was the right response. The fact that we got the win is the icing on the cake for the response.

On the last 48 hours being perhaps overblown in the media
I felt like we were going go out and play well and I’m not just saying that, I felt good about our group. I think the last 48 hours, it was different, but isn’t as dramatic as maybe I feel from the line of questioning. We’re not happy that Cal is in Ontario right now, none of us are, we all take responsibility for that, but we’ve got to move on. The fact that the [general] manager came in to talk to us, that happens. I don’t think it’s as dramatic as anybody in here maybe thinks it was.

On Anze Kopitar’s play tonight
He was tremendous tonight. He’s been good all along, sometimes the goals coming off his tape aren’t there but he’s done really good things this year. This second go around with Kevin there I think is starting to feel more comfortable for the three of them. Kopi in particular, because we’re talking about him, he’s found himself in a number of different spots this year on the powerplay. Our breakout entries changed a little bit, he doesn’t have to skate as much as he used to, so there was some thought process put into that. Wherever he is on the power play. he seems to get it done, so a pretty good utility player.

On if the conversations of the last 48 hours end simply by winning games
Yes and no. The no part is that you can win them the wrong way and you’re not getting healthy, your team stays sick. You can sometimes lose games the right way and you’re getting better, so it isn’t always the complete result. That’s what we play for, but the input into the game is really important and our input has been good and then it wavers and then it falls off and then it comes back to good. We’re a little bit like a yo-yo. Tonight was a little more consistent. Falling behind 3-1, as I said earlier, there were some circumstances that played into it that I don’t know normally would be part of the game, but they were.

Notes –
– Anze Kopitar scored a pair of goals for his second consecutive multi-point game. Kopitar’s first goal was his 20th point of the season. No player in Kings franchise history has more points versus Arizona than Kopitar (23-66-89).
– Kevin Fiala notched his eighth multi-point effort (1-1-2) of the season to extend his team leading point total to 28 points (8-20-28).
– Per NHL PR, only four skaters have recorded at least 20 assists in fewer games from the start of their tenure with LA: Wayne Gretzky (15 GP, 1989-99), Larry Murphy (21 GP, 1980-81), Pavol Demitra (22 GP, 2005-06) and Jozef Stumpel (25 GP, 1997-98).
– With assists tonight, both Viktor Arvidsson and Sean Durzi extended their point streaks to four games. Arvidsson now has 10 points (2-8-10) from his last nine games, while Durzi has six points (1-5-6) over his last four.
– Tobias Bjornfot and Samuel Fagemo earned assists in their Kings season debuts. Fagemo’s helper marked his first career NHL point.
– Carl Grundstrom registered his sixth goal of the season. In doing so, he became the first LA Kings skater to score on his birthday since Drew Doughty (Dec. 8, 2016 vs. CAR).
– Defenseman Drew Doughty logged 28:15 tonight, his second-highest total of the season in a game that ended in regulation.

The Kings have a scheduled day off tomorrow and will return to the ice for morning skate on Saturday at 10:30 AM, before they conclude their homestand at 7:30 PM that evening versus Carolina.