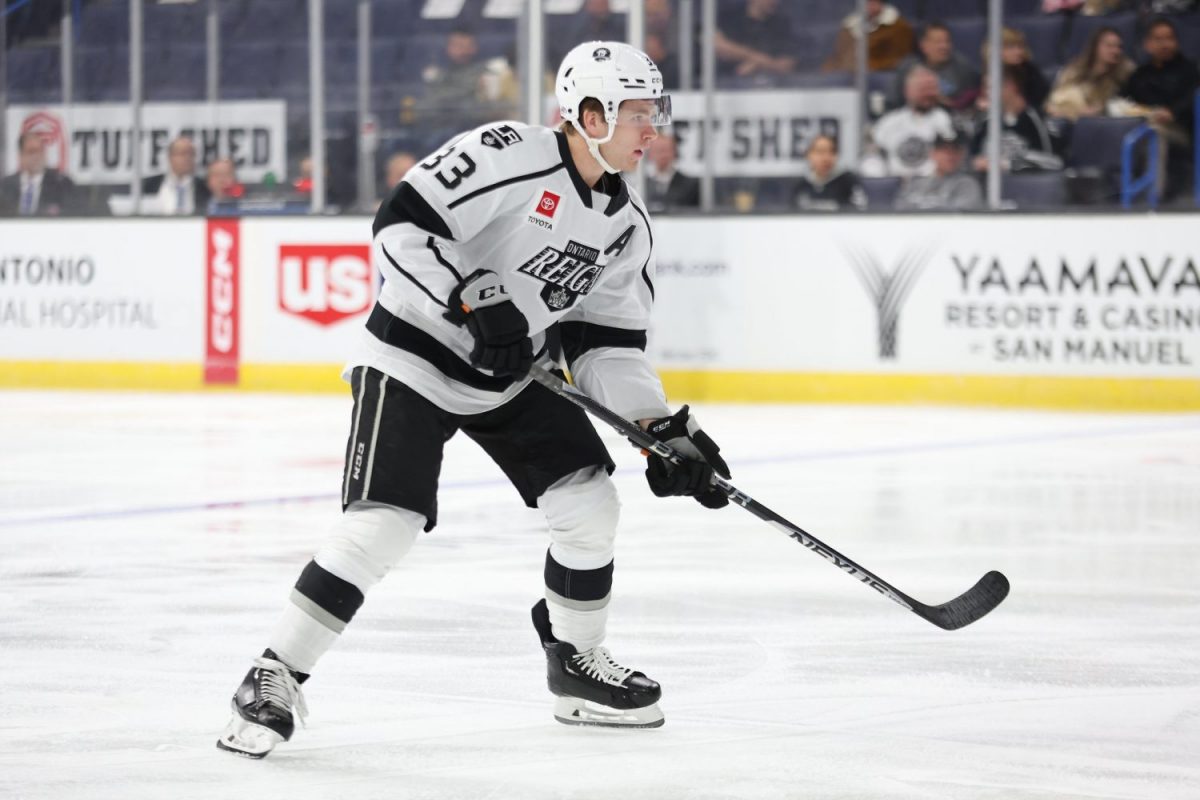 TONIGHT’S MATCHUP: The Ontario Reign will go up against the Tucson Roadrunners for the first time this season Saturday night at Toyota Arena, beginning a two-game series this weekend in Ontario. Last season, on their way to a second place finish in the Pacific Division the Reign posted a 5-2-1-0 record against Tucson, while the Roadrunners did not qualify for the postseason. This season has been different for the Arizona Coyotes’ affiliate, as the club is tied with Ontario for third place. Each team has nine wins and 19 points in 15 contests so far this year. The two teams will once again play against each other eight times during the 2022-23 regular season.

WHAT TO WATCH FOR: Both the Reign and Roadrunners are coming off wins on Thanksgiving Eve Wednesday, with Ontario taking down San Jose 5-1 and Tucson holding on for a 3-1 win in San Diego. The Reign have been a top team in the league defensively, currently ranking fourth in the AHL by conceding just 2.53 goals per game. Ontario has also been at their best when getting out to a lead, posting a 8-0-1 record this season when holding an advantage after 40 minutes. While they have a winning record, Tucson ranks in the middle of the pack on both offense and defense, scoring an average of 3.20 goals per game (14th) while allowing 3.20 tallies per contest (18th).

LAST TIME OUT: Three goals in the first period gave the Ontario Reign an early lead they never relinquished on their way to a 5-1 win over the San Jose Barracuda at Toyota Arena on Wednesday night. Forward Quinton Byfield posted assists on three of the team’s tallies, while defenseman Jordan Spence scored his first goal of the year as well as an assist in the victory. Forward Tyler Madden also found the back of the net, scoring for the third consecutive game, and forward Alex Turcotte posted his first multi-point effort of the season with two assists. Goaltender Pheonix Copley got the start and turned aside 21 shots to improve his record to 6-3-1 on the season.

MADDEN MAKING IT COUNT: Forward Tyler Madden scored at the 4:41 mark of the second period during Wednesday’s win over San Jose, finding the back of the net for the third straight game. Madden also posted a power play goal in the third period of Sunday afternoon’s victory against Henderson, which initially served as insurance but eventually ended up as the game-winning goal for Ontario. Combined with a goal he had in the second period of last Saturday’s contest against the Silver Knights, Madden has earned goals in all three of the Reign’s contests against HSK this season. The winger, who changed numbers this year and now dons No. 10, has posted five goals and seven points in 14 outings to begin 2022-23. Now in his third pro season, the Deerfield, Fla. native has appeared in 76 career AHL games with Ontario, scoring 43 points on 20 goals and 23 assists. Madden reached career-highs last year with 14 goals and 31 points in 48 contests for the Reign.

SCOUTING THE ROADRUNNERS: Tucson has been led offensively by returning forward Michael Carcone, who is in the top 10 of AHL scorers with 20 points in 15 games on six goals and 14 assists. The attacker also leads the team with 39 penalty minutes this season. Center Jean-Sebastien Dea has posted seven goals which ranks first among all Roadrunners skaters, while Laurent Dauphin has made an impact with 12 points in 13 games (five goals, seven assists). Defender Victor Soderstrom leads the club’s blueliners with seven points, which have all come from assists. In goal, Tucson has rode returning netminder Ivan Prosvetov, who has won in six of his 10 appearances and holds a 2.72 goals-against average along with a 0.917 save percentage. Veteran Jon Gillies has also seen action in six games and has a record of 3-2-1.

BIG GAME BYFIELD: Forward Quinton Byfield had the biggest night of production during his AHL career Wednesday, earning assists on three of Ontario’s goals in the 5-1 win over San Jose. Byfield recorded the primary assist on the opening goal of the evening by Samuel Fagemo at 7:39 of the first period. He then added his second primary helper on a goal by Tyler Madden at 4:41 of the second before picking up the second assist on a strike by Jordan Spence later in the middle frame. The trio of assists were Byfield’s first helpers in the AHL this season, where he’s now posted five points in six games (2-3=5). Wednesday’s effort was also his first multi-point night of the 2022-23 season.

SPENCE KEEPS SHOOTING: Defender Jordan Spence has recorded six assists in Ontario’s last seven games, but the highlight of his most recent performance on Wednesday was his first goal of the 2022-23 season. Coming off a feed from Alex Turcotte behind the net, Spence blasted the puck into the cage to extend the Reign’s comfortable lead in the second period. The blueliner also led Ontario with six shots on net during the game, which added to his overall season total of 53 shots which is the most of all Reign skaters and ranks second among AHL defensemen. The Sydney, Australia native’s assist total is also fourth-most in the AHL and his point total ranks fourth among league defenders.

VILLALTA AT THE TOP OF HIS GAME: Goaltender Matt Villalta has played well in between the pipes for Ontario this season, winning three of his five starts while allowing just 11 total goals to earn a goals-against average of 2.04 and a 0.930 save percentage. With a 31-save shutout of Colorado earlier this month, Villalta secured his first clean slate since April 24, 2021 when he turned aside 34 shots to blank the Condors in Bakersfield. The Godfrey, Ont. native’s goals-against ranks fourth and his save percentage is fifth-highest among all active AHL netminders. Villalta has built off a standout season during 2021-22 when he posted a 28-10-7 record in 46 games with a career-best 2.98 goals-against and a 0.903 save percentage.