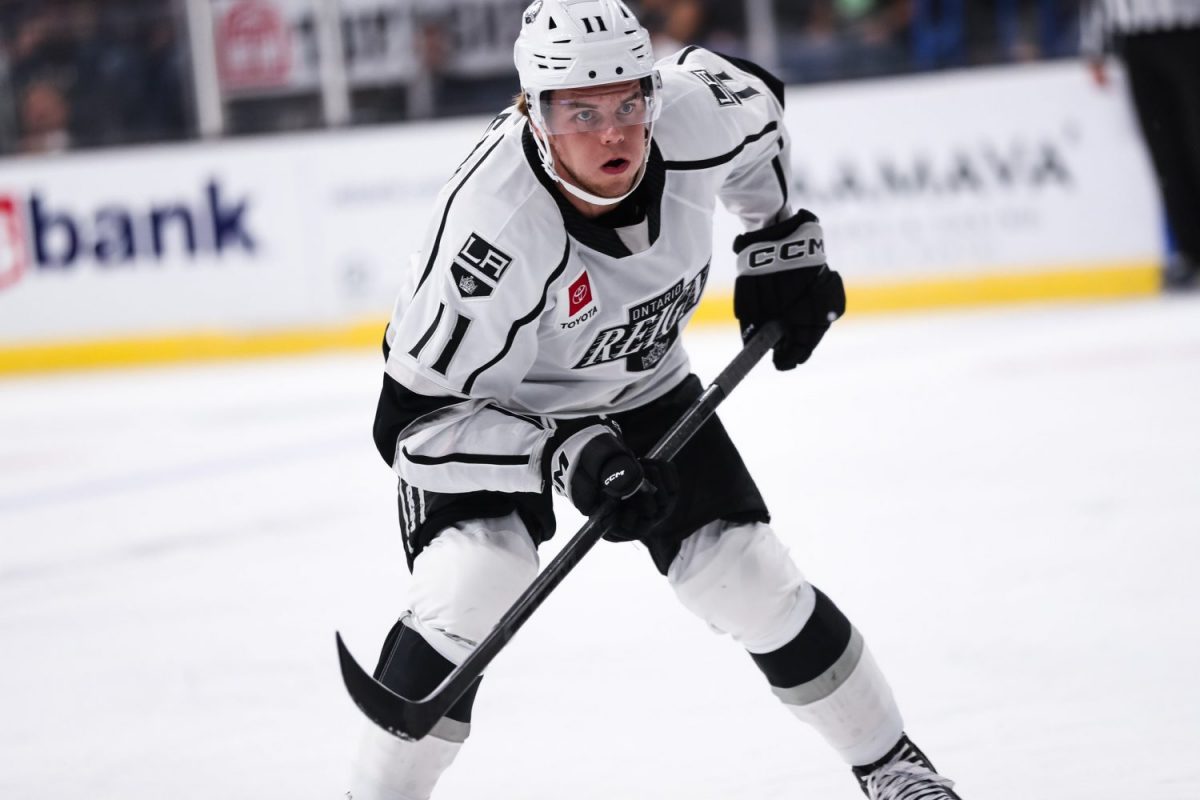 TONIGHT’S MATCHUP: The Ontario Reign and San Jose Barracuda are set for their third meeting of the season on Wednesday night, the first to be played at Toyota Arena. The Barracuda claimed the most recent matchup earlier in the month in a shootout by a score of 4-3 in San Jose, while Ontario won the first meeting 2-1 on Oct. 26. Both clubs have 17 points in the Pacific Division standings, part of a four-way tie for third place in the table. In total, the two teams will play against each other eight times during the 2022-23 regular season. A year ago, Ontario posted a 5-0-1 mark in six contests against the Cuda.

WHAT TO WATCH FOR: Both the Reign and Barracuda are coming off of wins on Sunday afternoon, with Ontario taking down Henderson 3-2 and San Jose blanking Tucson 6-0. The Reign have been a top team in the league defensively, currently ranking fifth in the AHL by conceding just 2.64 goals per game. Ontario has also been at their best when getting out to a lead, posting a 7-0-1 record this season when holding an advantage after 40 minutes. While the Barracuda have struggled offensively, scoring just 2.67 goals per game during their first 15 games, they’re also a standout team on defense, allowing just 2.80 goals per contest which ranks seventh. San Jose has also been impressive on the penalty kill and leads the AHL with a 90.1% kill rate.

LAST TIME OUT: Goals from Quinton Byfield, Brandt Clarke and Tyler Madden, combined with 27 saves from Pheonix Copley propelled the Ontario Reign past the Henderson Silver Knights Sunday afternoon by a score of 3-2 at Toyota Arena. Ontario’s players wore specialty jerseys and the team’s fans supported Hockey Fights Cancer during the victory. Madden found the back of the net for the second straight day and has now scored in all three of Ontario’s games against the Silver Knights this season, while Clarke’s tally was his first as a pro in his third AHL game.

MADDEN MAKING IT COUNT: Forward Tyler Madden posted a power play goal in the third period Sunday afternoon which initially served as insurance, but eventually ended up as the game-winning goal for Ontario in a victory over the Silver Knights. After also scoring in the second period on Saturday in Henderson, Madden has posted goals in all three of the Reign’s contests against HSK this season. The winger, who changed numbers this year and now dons No. 10, has posted four goals and six points in 13 outings to begin 2022-23. Now in his third pro season, the Deerfield, Fla. native has appeared in 75 career AHL games with Ontario, scoring 42 points on 19 goals and 23 assists. Madden reached career-highs last year with 14 goals and 31 points in 48 contests for the Reign.

SCOUTING THE BARRACUDA: After a hot start, San Jose has fallen back closer to the .500 mark, holding a record of 8-6-0-1 through their first 15 games this season. New head coach John McCarthy resides over a much different roster than the Barracuda had a year ago, with veteran forward Andrew Agozzino leading the way by scoring 11 points in 15 games (3-8=11). Rookie forwards Tristen Robins, Thomas Bordeleau and William Eklund have each registered nine points apiece, with Bordeleau posting a team-high seven goals. Defender Derrick Pouliot has paced the scoring on the back end with nine assists. In goal, San Jose has gotten good play from both veteran Aaron Dell and rookie Eetu Makiniemi, who have played seven games apiece. Makiniemi has a 2.27 goals-against average along with a 0.926 save percentage.

CLARKE’S BIG DAY: Defenseman Brandt Clarke scored his first AHL goal and assist in Sunday afternoon’s win, his third game of his rookie professional season with Ontario. The former eighth overall pick in the 2021 NHL Draft, Clarke began his season by seeing time in nine contests at the NHL level with the LA Kings before being sent to the Reign on a conditioning stint last week. His breakout performance included a second period goal which came on a rebound scramble in front of the net to put Ontario ahead, as well as a primary assist on Tyler Madden’s power play tally in the third. The 19-year-old Nepean, Ont. native also had two assists during his time with the Kings.

VILLALTA AT THE TOP OF HIS GAME: Goaltender Matt Villalta has played well in between the pipes for Ontario this season, winning three of his five starts while allowing just 11 total goals to earn a goals-against average of 2.04 and a 0.930 save percentage. With a 31-save shutout of Colorado earlier this month, Villalta secured his first clean slate since April 24, 2021 when he turned aside 34 shots to blank the Condors in Bakersfield. The Godfrey, Ont. native’s goals-against and save percentage both rank fifth among all active AHL netminders. Villalta has built off a standout season during 2021-22 when he posted a 28-10-7 record in 46 games with a career-best 2.98 goals-against and a 0.903 save percentage.

SPENCE SUPPLIES THE ASSISTS: Defender Jordan Spence has recorded five assists in Ontario’s last six games and now has 13 total helpers this season in 14 games which is tied for fifth-most in the AHL. Spence’s point total is also fifth among all league defenders. The Sydney, Australia native totaled seven shots on goal in last weekend’s home-and-home series with Henderson and leads the team this season with 47 total shots which also ranks second-most among AHL blueliners. Spence has now been credited with 51 assists in 60 career AHL games.