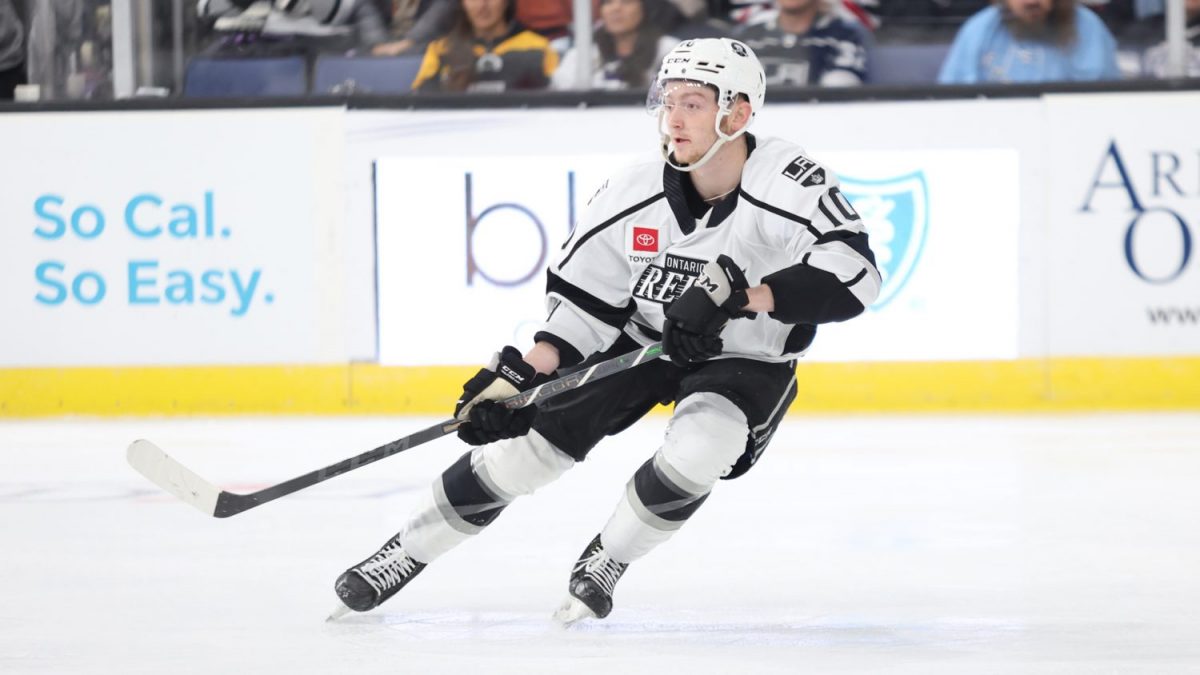 Three goals in the first period gave the Ontario Reign (9-5-0-1) an early lead they never relinquished on their way to a 5-1 win over the San Jose Barracuda (8-7-0-1) at Toyota Arena on Wednesday night. Forward Quinton Byfield posted assists on three of the team’s tallies, while defenseman Jordan Spence scored his first goal of the year as well as an assist in the victory.

Forward Tyler Madden also found the back of the net, scoring for the third consecutive game, and forward Alex Turcotte posted his first multi-point effort of the season with two assists. Goaltender Pheonix Copley got the start and turned aside 21 shots to improve his record to 6-3-1 on the season.

More from head coach Marco Sturm, Spence and Madden below.

Ontario dominated the first period of play, dictating their way to a 3-0 lead with a 16-5 shots-on-goal edge in the opening 20 minutes. Forward Samuel Fagemo started the scoring with his fifth goal of the year from Byfield and Spence at 7:39, coming off a rebound on the power play.

Defender Tobias Bjornfot made it 2-0 with his second goal of the season at 12:43 which came on a cross-ice feed by forward Martin Chromiak. The assist was Chromiak’s first AHL point, and a second helper was also credited to forward Samuel Helenius, his third assist of the year.

Exactly two minutes after Bjornfot’s strike, defenseman Tobie Bisson netted his first goal as a member of the Reign, wristing the puck underneath the blocker of San Jose goaltender Eetu Makiniemi to increase the lead to 3-0 Ontario. Assists on the play went to both defender Cameron Gaunce and forward Nate Thompson.

The Reign began the second where they left off in the first, with Madden scoring his fifth goal of the season at 4:41 of the middle period from Byfield and Turcotte to push the lead to 4-0.

In the latter half of the frame Spence slapped home a direct feed from Turcotte at the side of the net at 15:45, extending the team’s comfortable advantage to 5-0. The second assist on the play went to Byfield, who recorded the first three-point game of his AHL career.

San Jose’s Tristen Robins found the back of the net during a power play chance less than a minute later at 16:44, but the Barracuda were unable to get anything else on the board for the remainder of the evening, taking four minor penalties in the third period to halt any momentum gained.

Both clubs had a power play goal in the game, with San Jose finishing 1-for-4 while Ontario ended at 1-for-6. The Reign held a 34-22 shots-on-goal edge in the contest and Makiniemi ended the game with 29 saves for the Barracuda in a losing effort.

The Reign are back in action this weekend when they host the Tucson Roadrunners in a two-game series at Toyota Arena beginning Saturday night at 6 pm.

Marco Sturm
On tonight’s dominant win
We had a really good start. I think we didn’t give them a chance right away. They probably didn’t have their best game either, but we put them in that situation as well. It was really good for the most part. The only thing, I think, was that there were stretches when we kind of played at their level. We didn’t want to do that. We want to play our game for 60 minutes, but I’ll take 5-1 anytime.

On keeping the Turcotte-Byfield-Madden line together
I think they’ve got something. I think Turcotte needed some time as well, especially on the left side, and he showed out today. I think he had some opportunities. This line is clicking. Quinton [Byfield] and Tyler [Madden] had some good chemistry last year when Q was up [with the Kings] or down here with the Reign. I just wanted to give them another shot and I had a good feeling, and they were much better today.

On having a strong start at home
If you look at our record when we have the lead, I think it’s pretty good. I think we are a better home team as well. We played with more confidence too. At the start today we definitely set the tone right away and didn’t give them anything. It should that way. We love playing at home and I feel like the team is definitely more comfortable at home, probably like any other team, but we want to continue to have a good home record. Teams who come into this building should know it’s going to be a tough night, and that’s what we did [to San Jose] tonight.

Jordan Spence
On scoring his first goal of the season
I was getting a little bit nervous to be honest, but obviously it’s good to just get one out of the way. I think I’ve had great chances, but I just got to bury them. Today, luckily, I buried it. Hopefully I can keep that going.

On his game tonight with Tobias Bjornfot
I thought I played pretty well. It’s pretty easy when I’m playing with Bjornfot. He’s a great player and I think we’re getting a lot of good chemistry just because we’ve been playing together since game one. I think it was a good game overall between both of us.

On the Reign power play
We just have to keep it simple. I think at the start of the season, we were doing really well. The last five games its been on and off, but I think we’re just trying to get our groove back, get our confidence back and just shooting pucks on net. We’re keeping it simple and then after that make some fancy plays and go from there.