Angeles Analysis – A Microcosm Of A Night 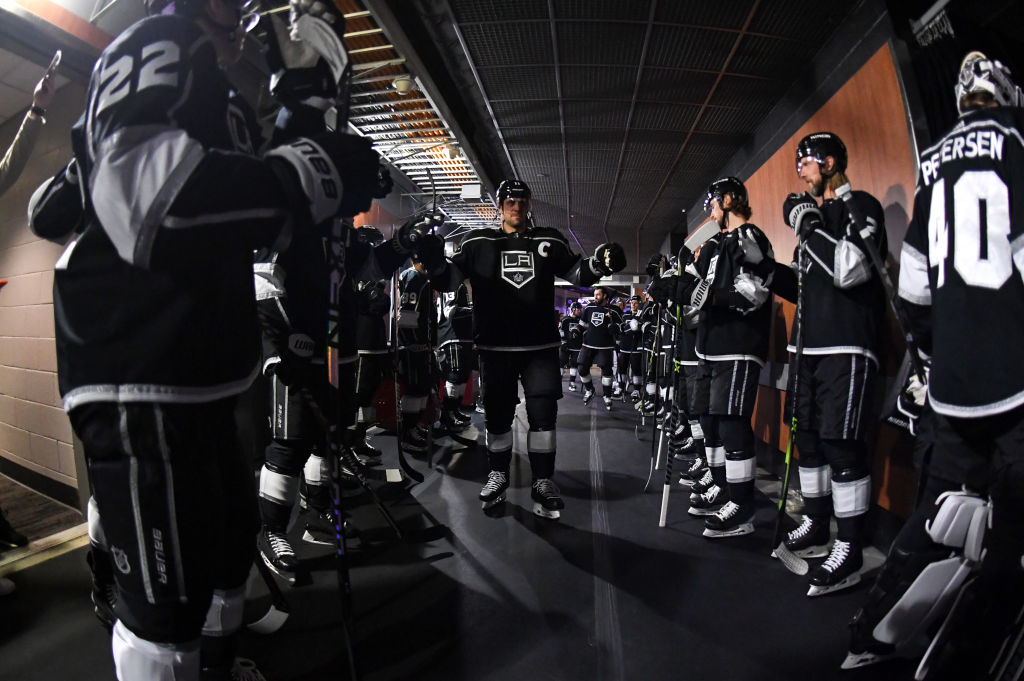 The Kings had played 21 games coming into last night’s action and Game 22 felt like Games 1 through 21 combined.

The first period was fast, aggressive and assertive hockey. The top line generated a goal on their first shift back together, with all three members contributing on the play. After scoring that goal, Kevin Fiala turned facilitator, with a pinpoint feed on the power play to Gabe Vilardi, snapping the latter’s six-game drought. Beyond the goals, the Kings made a good New York team look……well, not good. It was suffocating and if not for Vezina Trophy winner Igor Shesterkin, it could have been more.

The second period saw all of that, and then some, come back at the Kings. The chances were still there at the offensive end, with several high-quality looks, but they were there the other way too. Gone was the fast-skating, up-tempo and tenacious style from the first and arriving in its place was a game that the Rangers pushed back in, resulting in three goals against. You can’t even pinpoint any of the three goals as being particularly bad individually. Heavy traffic on a shot the Kings kept to the outside, a once-in-a-season fluke bounce and a shot that was going wide that hit a Ranger in the chest and fell right to Kaapo Kakko in the crease. Despite the nature of each goal individually, the flow of that period was trending the way of Rangers offense and the scoreline reflected exactly that.

The third period saw a microcosm become even more……microer? Micrish? More Micro? At 15:24, the Rangers entered the offensive zone. At 15:09, Cal Petersen made perhaps the save of the season, not just for the Kings, but across the NHL. At 14:08, after 76 seconds in the defensive zone, Kevin Fiala and Alex Edler combined for a defensive play that sprung the Kings the other way. At 13:48, Sean Walker fired home the game-tying goal. At 12:54, the Rangers scored right back to re-take a one-goal lead. For a game that felt like it was a picture of the Kings season, that stretch of two minutes and 30 seconds felt like an even smaller representation.

In that span, you saw turnovers on the breakout that caused an extended shift in the defensive zone. You saw a highlight-reel save from a Kings goaltender to prevent a goal. You saw selfless and heroic blocked shots and a willingness of the group to play for their goaltender. You saw an inability to get a whistle or a clear when it was needed. You saw the Kings flow quickly in transition and start a play out of nothing. You saw the Kings strike quickly offensively. You saw a bump-up shift impact a game, one way or the other. And you saw the Kings concede a goal that Todd McLellan felt should have been stopped. All in the span of two minutes and 30 seconds.

After the game, it felt pretty clear that the span of two minutes and 30 seconds was the most impactful two minutes and 30 seconds of the evening. Had any number of things gone differently, you wonder if it changes the game, for better or for worse. Sitting in the press box, immediately after New York scored, Jack Jablonski asked me if I would have preferred the events to have played out as they did, or in reverse, with New York scoring at the expense of the ridiculous Petersen save and the Kings pulling one back in normal fashion. Same 4-3 scoreline, but I think it’s obvious after seeing how the game progressed that we’d all have preferred the latter. No guarantee the Kings come back in a make believe situation, as they would have been down 4-2, but perhaps it would have been an easier recovery for the group emotionally as opposed to the quick-fire goal against. In each of the last three games played, the Kings have conceded a goal on the shift immediately following a potential momentum-changing goal for. After cutting the deficit to 2-1 in Vancouver, after taking a 2-1 lead in Seattle with a shorthanded goal and after tying the game at 3 last night. Those are massive, momentum-changing plays and over the last three gaes, they’ve all gone against the Kings.

At the end of the day, as you will, the Kings have won exactly half of their games played – 11 of 22 – with a pair of overtime defeats putting the club two games over .500. The stretch of hockey heading into Vancouver was exceptionally positive, with a 7-2-1 mark over their last ten games, but an 0-2-1 stretch since has dampened the mood. For a team in search of consistency, on another night the Kings probably find a way last night. But that’s the thing with consistency, isn’t it?

With five in-state games coming up, against teams that have lost 53 of 92 in the early stages of the season, no better time than the present to try and find it. The next test, however, comes against a San Jose team that too 3-of-4 from the Kings last season, and 9-of-12 over the last two seasons. With two days off, the Kings will look to deliver that first period performance in the Tank on Friday.

The Kings are scheduled to hit the ice at 11 AM today for practice in El Segundo. The team has a rare bit of reprieve in the schedule, with just one game sandwiched around four non-game days. The Kings will travel to San Jose on Thanksgiving tomorrow, in advance of Friday’s return to action versus the Sharks. The Kings have had just two sets of two days in between games all season entering this week. They now have two over the course of five days.