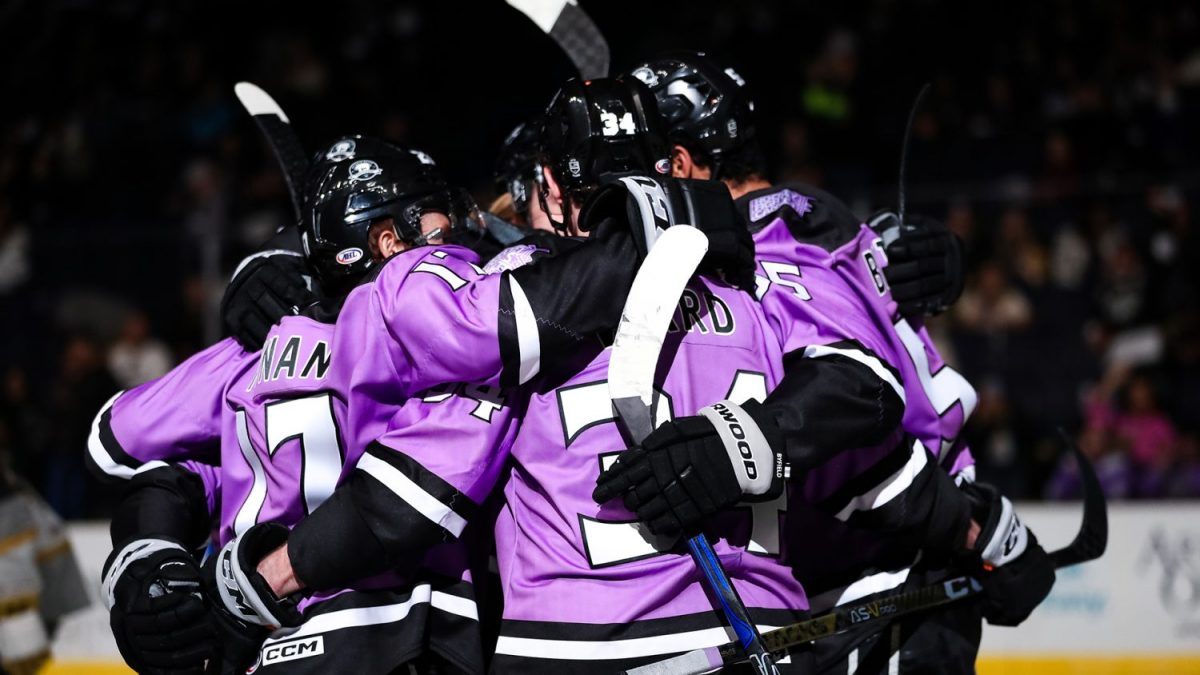 Goals from Quinton Byfield, Brandt Clarke and Tyler Madden, combined with 27 saves from Pheonix Copley propelled the Ontario Reign (8-5-0-1) past the Henderson Silver Knights (5-12-0) Sunday afternoon by a score of 3-2 at Toyota Arena. Ontario’s players wore specialty jerseys and the team’s fans supported Hockey Fights Cancer during the victory.

Madden found the back of the net for the second straight day and has now scored in all three of Ontario’s games against the Silver Knights this season, while Clarke’s tally was his first as a pro in his third AHL game.

More from head coach Marco Sturm, Copley and Clarke below.

Ontario took an early lead just 3:20 into the contest on a power play goal by Byfield. After the penalty, Byfield won the first faceoff to begin the man-advantage in the Henderson zone and went to the net, deflecting a shot by Jordan Spence into the goal for his second tally in five games with Ontario this season.

Copley made the lead hold up later in the frame, turning aside multiple grade-A opportunities for the Silver Knights and preserving the 1-0 edge into the first intermission.

Henderson tied the game at 1-1 when Ivan Morozov scored at 6:09 of the second, but after killing off an interference penalty to Jordan Spence, the Reign regained momentum.

At 14:23 of the period a shot by Taylor Ward was blocked and Clarke crashed the net, pulled a loose puck away from the scramble and wristed it into the cage for his first professional goal to give Ontario a 2-1 lead.

Madden gave the Reign some breathing room with a power play goal at 11:16 of the third, taking a pass from Clarke and putting the puck just inside the left post to make it a 3-1 game. A second assist on the goal was credited to Alan Quine, his eighth helper of the season.

The Silver Knights pulled goaltender Laurent Brossoit with three minutes remaining, but Ontario kept them off the scoreboard until just 10 seconds were left on the clock. Gage Quinney was credited with the late tally, but the visitors ran out of time in their comeback bid.

Copley improved his record to 5-3-1 on the season, while Brossoit suffered the loss despite making 20 saves. Ontario’s power play scored on both of its opportunities and also killed off both of Henderson’s man-advantages. The Silver Knights had a 29-23 shots-on-goal edge in the contest.

The Reign continue their seven-game homestand on Wednesday night with a Thanksgiving Eve matchup against the San Jose Barracuda at Toyota Arena at 7 p.m.

Marco Sturm
On snapping the team’s five-game losing streak
It was better. I think the effort was there. I think the commitment was there. I think [the players] tried to do the right thing. These guys work. They come to work every day. We just didn’t connect as well as we used to, but I think that’s normal. It’s been a hard ten days or a couple of weeks, so I’m glad we came up with the big two points tonight.

On special teams playing a huge role in the win
I’m saying it every time, but special teams are big. Yesterday we lost not just because of the PK goal against but because we had the opportunity to score a couple times on the power play and didn’t. Today was different and we won, so sometimes special teams makes the difference.

On the top prospects who recently returned to the lineup
It started with Quinton [Byfield], especially. I think that his best game was yesterday. He had the puck a lot, he was breaking out everywhere, and it all went through him. That’s how it should be. Today, he was okay, but I think yesterday was really good and you can tell he’s slowly getting his feet and body going. Same with Turcotte. There’s a few guys who just have to be patient and we still have to work with them. All of them still have a lot left in the tank and we’re here to try and develop and help them, to get them up [with the Kings] as soon as possible.

On Turcotte playing as a winger on the Byfield-Madden line
Especially for him, being away for such a long time and now playing as a wing, sometimes its not fair to the player. We expect a lot from him and he hasn’t really played [as a winger] in a long time. That’s why, even when he makes a mistake, its okay. You have to help him to, because I’m the guy who’s going to put him in that situation and I will be the guy who is going to help him out. He will be the guy who is going to get better each week. I think, with Lias [Andersson] gone for a bit, we needed somebody to play with Byfield. We have a lot of centermen, so we made that switch and we’ll see how long it goes. I think [that line] had a pretty good start. I think there’s no reason to change that.

Pheonix Copley
On ending the losing streak
It definitely feels good. We were desperate and hungry for a win, and you could see that we came out pretty hard, so it feels nice to get back to our winning ways. I think that and it can be a learning lesson for us going through that as a team. Obviously its very frustrating to be losing and not winning, so I think going forward we can take that as a lesson and use that hunger to not let that ever happen again.

On his mentality during a skid
For me, I want [my mentality] to be the same. There can be times when that’s more challenging than others. Obviously, when you’re losing, it’s a little bit more challenging to play the way I want to play. But it’s hockey and it’s sports, there’s wins and losses, so you just have to roll with the punches, learn from it, and get better.

On responding to the second goal, which was a bad bounce
You just have to move on from it. That kind of stuff happens and if we’re going to win games and if we’re going to be a good team, we have to push through adversity. We did that tonight and that’s why we came out on top. We could have easily folded. That was obviously a tough break for us, but the guys came back and scored right away. I think that helped everybody and got everybody going again.