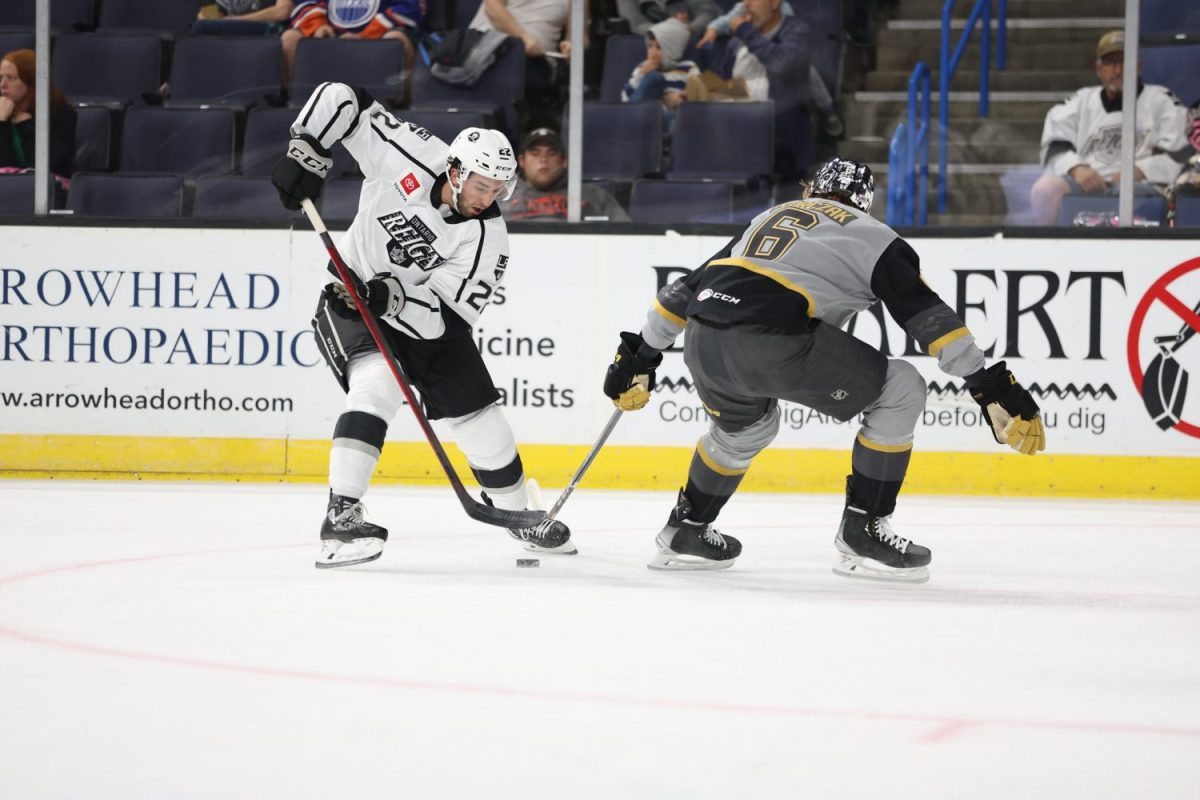 TONIGHT’S MATCHUP: The Ontario Reign and Henderson Silver Knights open a two-game weekend home-and-home series Saturday afternoon at the Dollar Loan Center. Saturday’s contest is the second of eight this season between the two division rivals. The Reign claimed a 5-3 win in the series opener one month ago in Ontario highlighted by a shorthanded goal from Tyler Madden, a power play strike from Rasmus Kupari and a game-winner by Akil Thomas in the final minute of the second period. Ontario is looking to regain possession of first place in the Pacific Division, where six teams are separated by just three points. The Silver Knights have ground to make up in the standings, currently sitting at the bottom among the 10 clubs.

WHAT TO WATCH FOR: After a hot start, Ontario has dropped its last four decisions despite continuing to play well defensively. The Reign rank fifth in the league in goals against per game, allowing just 2.67 tallies per contest. Ontario has been at its best when getting out to a lead, posting a 6-0-1 record this season when leading after 40 minutes. The Reign have also earned a 6-1-0 mark in games which they’ve been out shot by their opponent. While the Silver Knights have struggled offensively, scoring just 2.53 goals per game from their first 15 contests, they allow an average of 28.67 shots per night, which is the fourth lowest in the AHL. Henderson has also been impressive on the penalty kill, discarding 88.5% of opponents’ man-advantages which is the third-best rate in the league.

LAST TIME OUT: Three goals in the first five minutes of the second period were enough for the San Diego Gulls to defeat the Ontario Reign Sunday afternoon at Toyota Arena. The game ended in a 4-1 score, with Gulls’ goaltender Lukas Dostal turning aside 28 shots while allowing just a single goal to Ontario’s Aidan Dudas in the third period. San Diego’s Benoit-Olivier Groulx also posted three assists in the contest. Pheonix Copley suffered the loss in goal for the Reign, making 18 saves.

DUDAS’ DELIVERY: Forward Aidan Dudas scored the Reign’s lone goal in their last outing on Sunday and has found the back of the net in three straight home games. The Parry Sound, Ont. native also ranks second in the league among active players with a shooting percentage of 33%, scoring five goals on just 15 shots this season. Overall through the team’s first 12 games, Dudas is tied for the club lead with five goals. Now in his third pro season, he has appeared in 116 career games with Ontario, scoring 42 points on an even 21 goals and 21 assists. Dudas is already halfway to his career-high mark of 10 tallies which he recorded last season in 61 games.

SCOUTING THE SILVER KNIGHTS: The AHL affiliate of the NHL’s Vegas Golden Knights, Henderson has had a slow start to the 2022-23 season by recording just four wins from their first 15 games. Former Reign forward Sheldon Rempal is leading the team in scoring with 10 points on five goals and five assists, while Pavel Dorofeyev, the team’s leading scorer from last season, is back for another run and has scored three goals in nine games. Forwards Gage Quinney (3-6=9) and Sakari Manninen (2-7=9) have each posted nine points, while defender Daniil Miromanov has four goals and five assists in 12 games. In goal, Jiri Patera has appeared in nine games to begin his third season with Henderson, posting a 2-6-0 record with a 3.42 goals-against average, while veteran Michael Hutchinson has played in four contests and Laurent Brossoit has seen time in four games since returning from an injury.

VILLALTA AT THE TOP OF HIS GAME: Goaltender Matt Villalta has played well in between the pipes for Ontario this season, winning three of his four starts while allowing just nine total goals to earn a goals-against average of 2.03 and a 0.932 save percentage. With a 31-save shutout of Colorado earlier this month, Villalta secured his first clean slate since April 24, 2021 when he turned aside 34 shots to blank the Condors in Bakersfield. The Godfrey, Ont. native’s save percentage is second-best in the AHL, while his goals-against ranks sixth among all netminders. Villalta has built off a standout season during 2021-22 when he posted a 28-10-7 record in 46 games with a career-best 2.98 goals-against and a 0.903 save percentage.

SPENCE SUPPLIES THE ASSISTS: Defender Jordan Spence recorded assists in two of Ontario’s three games last week and now has 12 total helpers this season in 12 total games which is tied for fifth-most in the AHL. Spence’s point-per-game mark also has him tied for fourth in scoring among all league defenders. The Sydney, Australia native has posted 40 shots on goal which leads all players on the Reign roster and is the fourth-most among AHL blueliners. Spence has now been credited with 50 assists in 58 career AHL games.

WARDING OFF THE COMPETITION: Forward Taylor Ward led Ontario last week, scoring three points from the club’s three contests with a goal and two assists. The Kelowna, B.C. native scored a goal and added a helper last Thursday in San Jose before picking up another assist in Sunday’s loss to San Diego. The rookie attacker has six points in his first 12 games for Ontario this season (3-3=6) after recording 10 points in 16 outings to begin his pro career at the end of 2022-23 (3-7=10).