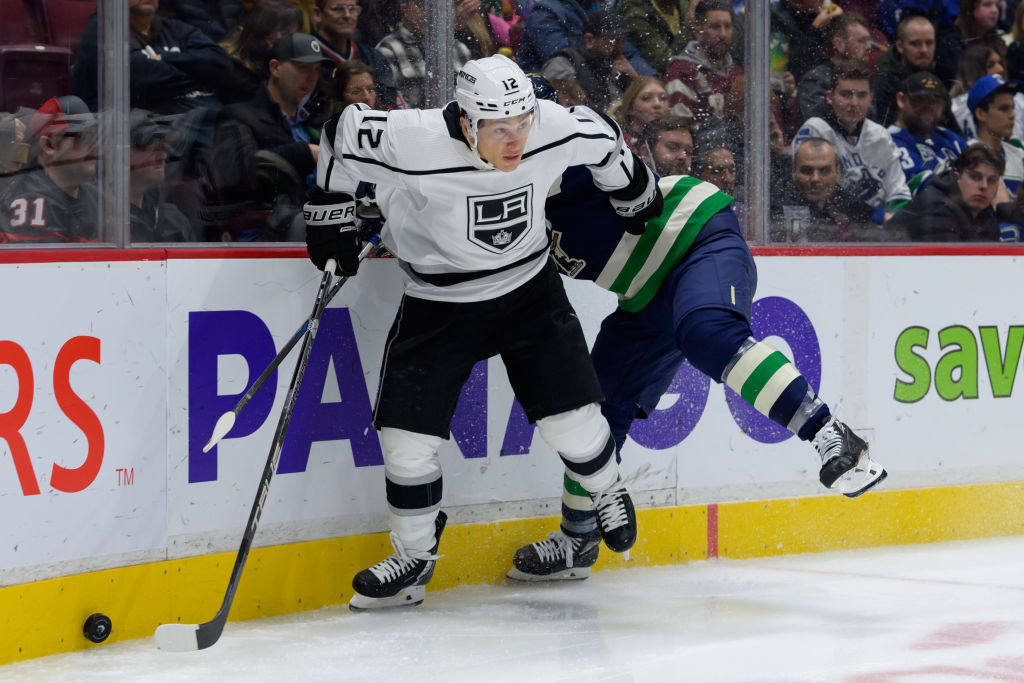 The LA Kings fell to 1-2-0 on their current road trip with a 4-1 defeat against the Vancouver Canucks on Friday evening at Rogers Arena.

Forward Blake Lizotte scored his team’s lone goal in the defeat, while goaltender Jonathan Quick made 21 saves between the pipes.

After a first period that saw neither team find the back of the net, as the sides combined for just 10 shots on goal, the Canucks scored the first two goals of the second period to take a two-goal advantage.

First, the hosts scored on a 3-on-2 break, as forward Elias Pettersson trailed on the play, took a feed off the rush from forward Andrei Kuzmenko and slotted home from the top of the left-hand circle. The Canucks made it 2-0 on the power play midway through the second period, as forward J.T. Miller fed teammate Brock Boeser at the back post, where he redirected home his first goal of the season.

The Kings pulled a goal back in the latter half of the second period, as Lizotte cut the deficit in half. Off a good shift along the boards, defenseman Sean Walker sent a shot towards the net that Lizotte got a redirect on from the high slot, sending it past Vancouver netminder Thatcher Demko for his fifth goal of the season.

Vancouver pulled the goal right back on the next shift, however, as Pettersson collected his second of the game. After an extended shift in the offensive zone, Kuzmenko found Pettersson at the back post, where he tapped it home for a multi-goal game, his ninth tally of the season.

The Canucks opened up a 4-1 lead early in the third period. After Arthur Kaliyev appeared to be interfered with in the offensive zone, Vancouver went the other way on a 4-on-1 rush. Quick made the first save, but Boeser crashed the net and whacked home the rebound out of mid-air for his second goal of the evening.

Anze Kopitar
On if he felt that tonight was a disjointed game when it came to puck movement
Yeah, I mean it was a lot more than just passing obviously. Bottom line is we didn’t play good enough to win tonight. Yeah, we had some chances and everything but way too loose in our zone and way too loose in our decision making, which lead to goals against.

On if he felt there was any potential for a letdown coming off the win in Edmonton
It shouldn’t be. I mean, it’s something that, if anything, we should ride the wave and you know, be on the high coming into this game. Like I said, we just didn’t play good enough today.

On the chances created by his line tonight
We had some good looks, yeah, but it’s a matter of capitalizing. The bottom line is we’ve got to score goals and obviously not give up as many. There’s a new game tomorrow and we’ll try to correct it.

On the goals conceded tonight against the run of play
Just decision making. There were a couple of plays where we didn’t take care of the puck and it turned out to be in our net. We’ve got to correct that.

Todd McLellan
On Kopitar using the phrase “decision making” as a cause for defeat
That could be a good way of putting it. For me, and obviously we haven’t discussed it as a team, just quickly with the coaching staff, but I thought we had some good performances tonight and I thought we had some poor ones. For as much as you’d like to always keep your team together and not separate them, I thought there were some individuals that let us down tonight, rather than the group as a whole. Sometimes people play the game a certain way, it may not be the way you like it, it may be ugly, it may be grinding, it might not be cute but that’s the way you have to play. We had some that couldn’t accept that or didn’t want to and I believe that cost us. I think that’s probably what Kopi is getting at too, but in a different way.

On his assessment of Kopitar’s line tonight
I thought they were fine. They created chances they did some of the things that maybe some of the other lines didn’t do and they didn’t hurt us.

On Blake Lizotte’s play and his current, 20-goal pace
Well, he had 10 last year and was injured. He’s a very competitive player, he shows up in games like this, he shows up every night in really. You know, it’s funny, when you have a player like that, that gives you every last ounce of everything he has, when he make a mistakes they’re much more livable than maybe the players that don’t quite get to that level. That’s why his teammates love him and that’s why it rubs off on teammates and it’s infectious if you will. I’m happy for him, every time we get to put him on the ice, I think he gives us everything he has.

On if he felt any sense of a potential letdown for certain individuals after the Edmonton game
No, I don’t think so. We were playing against a team that was coming home from a long road trip that had a plan and they stuck to it. They had 20 guys that were willing to play their plan and we didn’t have enough willing to play ours.

Notes –
– Blake Lizotte scored his fifth goal of the season in the second period, tied for fifth-most on the team.
– With his secondary assist on Lizotte’s second period goal, defenseman Alex Edler (102-330-432) tied former Detroit defenseman Niklas Kronwall (83-349-432) for the seventh most points by a Swedish-born defenseman in NHL history.
– Sean Walker (0-1=1) tallied his third assist on the year with the primary helper on Lizotte’s goal
– Arthur Kaliyev became the eighth member of the 2019 NHL Draft class to play in 100 career NHL games.

The Kings are scheduled to travel to Seattle following tonight’s game. Considering the back-to-back, the team is not expected to hold a morning skate tomorrow and will return to action tomorrow evening versus the Kraken.