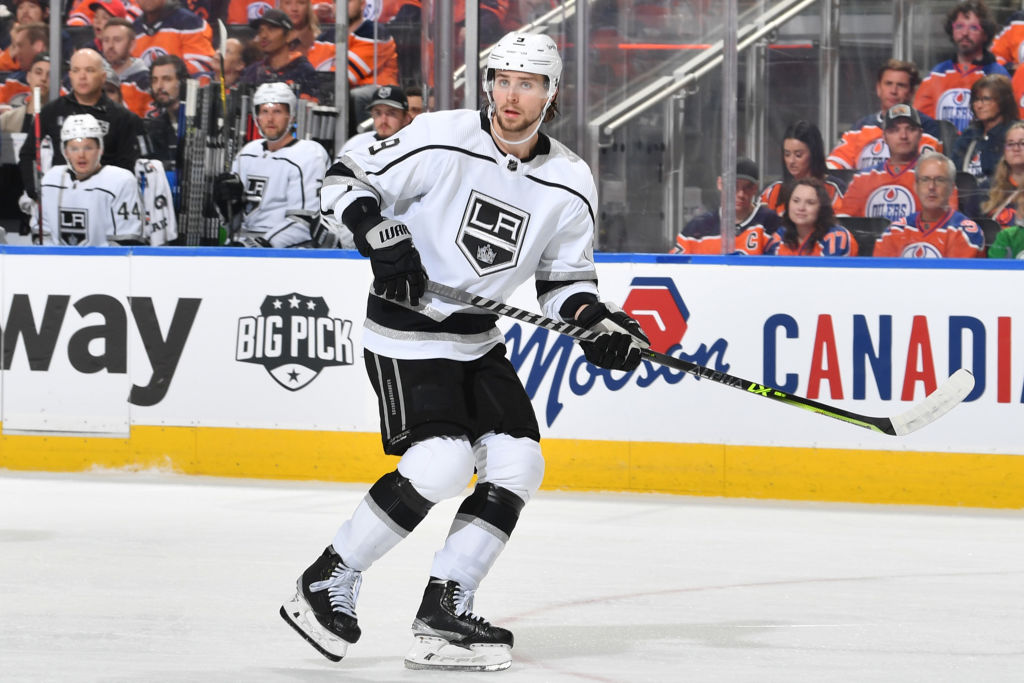 TONIGHT’S MATCHUP: The Kings continue on a four-game roadtrip this evening in Edmonton, with the first rematch of last season’s playoff series.

Goaltender Cal Petersen was first off the ice this morning in Edmonton, pointing to the notion that he will get the start between the pipes at Rogers Place this evening. All-time, Petersen has posted a 1-2-0 record with a .912 save percentage and a 2.73 goals-against average against the Oilers.

Looking at this morning’s alignment and how the Kings set up during yesterday’s practice, it doesn’t appear as if the Kings will have any changes to their lineup this evening. Below is how the Kings lined up on Monday –

The Kings made two lineup changes heading into Calgary, with a change in goal, as well as forward Jaret Anderson-Dolan checking in for an injured Brendan Lemieux. Anderson-Dolan appears set to continue in the lineup this evening, while forward Lias Andersson and Jacob Moverare were on late after morning skate today for extra work.

OILERS VITALS: Edmonton has been out of action since Saturday, when they defeated the Florida Panthers by a 4-2 final on the East Coast.

Goaltender Stuart Skinner is expected to get the start this evening versus the Kings. Skinner has never faced the Kings in his NHL career and brings a 3-3-0 record with a .932 save percentage and a 2.53 goals-against average on the season. Skinner is 7-6-5 throughout his minor-league career against the AHL’s Ontario Reign, with Edmonton’s primary affiliate the Bakersfield Condors.

Below is how the Oilers aligned during yesterday’s practice, a potential indication of tonight’s lineup –

Edmonton enters tonight’s action with the NHL’s two leading scorers in Connor McDavid (32 PTS) and Leon Draisaitl (28 PTS). Former Kings goaltender Jack Campbell is not expected to start tonight against his former club but will serve as the backup.

Notes –
Mental Readiness
When reflecting on the Calgary game over the last couple of days, Kings Head Coach Todd McLellan has now – multiple times – talked about mental readiness versus physical readiness. On Monday, the Kings had some jump and appeared to be physically ready to go, but it was the mental side of the game that he felt let the team down most of all.

Several of the goals against in the first period played into that notion, as the Kings conceded four times in the opening 20 minutes, despite an active and energetic start to the game. Perhaps a little bit harder to see coming when it’s the other way, but the Kings were not quite there in that department to begin the game.

“Usually the physical side is predictable, you’re somewhere in your schedule when you get a feel that the energy level may be a little bit lower,” McLellan said this morning. “You’re already somewhat planning for that, using players, using four lines a little bit more, rolling guys over quicker, making sure with shift length, you’re paying attention to it a little bit more. The mental part of the game is a little more unpredictable, yet it comes with fatigue too, so there could be signs of it.”

McLellan referenced the Detroit game as a perfect example of when things can go the other way. The Kings scored the second-fastest goal in franchise history on that day, as Alex Edler fed Rasmus Kupari and Carl Grundstrom for a 2-on-1, with the latter finishing it off.

It’s about more than just the opening faceoff, naturally, but it can be that quickly that you can see preparedness and heads up play.

“To contrast the two, the coverage that we had versus Detroit, we scored a goal [nine seconds] in because we did some of the things that we wanted to do,” he explained. “Then there are other, and I’m not saying Calgary, but other games where we might miss coverage right away and that’s a sign to a coach or to your teammates that we may not be here. If you don’t know what you’re doing three or four seconds in, you wonder sometimes, but our group has been pretty good with that.”

McLellan added that it’s not just the mental side when it comes to turning around Monday’s game in Calgary and that the team worked on a few different areas of the game to improve upon tonight versus the Oilers. It’s also one performance that followed five that the Kings were happy with, so it hasn’t become a trend.

That makes it a bit easier to believe in a turnaround and McLellan feels the Kings have done well with this season. Winger Adrian Kempe agrees.

The Juice Is Squeezing
Speaking of Kempe, it was great to see him get off the schneid in Calgary on Monday.

Kempe snapped a seven-game drought when it came to goals and the team’s leader in that department scored one that nearly set the stage for a massive comeback to earn a point, though the Kings couldn’t get another one to go in the final seconds. Even though he called his goal a bit of a “lucky” one, getting that to go was a confidence builder for him.

“I think we’ve played pretty well and I’ve had some chances over last couple of games and it was a little bit of a lucky one last game, but I think the chances I’ve had recently led to that a little bit.”

When a player isn’t scoring, in my opinion the first place you should look is the chances they’re generating.

If you go and look at the chances and they’re not there at all, or if they’re significantly down from where they were before, that’s a concerning sign. If the chances are there though, especially for a player who – in Kempe’s case – scored 35 goals last season, it’s a bit of a reassuring sign that the goals could follow.

Looking at Kempe’s 5-on-5 metrics, his individual numbers at 5-on-5 were actually higher when it came to chances for during his drought versus the ten games prior, in which he scored six total goals. Kempe’s scoring chances were nearly identical, ticking up from 2.3 to 2.4 per game, while his high-danger chances rose from 0.5 to 0.9 on a per-game basis. His overall attempts were up drastically as well, from 3.2 to 5.0. Where his numbers fell were on the power play, which he plays a part in, but you can’t pin it all on Kempe, either. It’s a group effort that is hopefully trending upward with some new implementations, but members of Kempe’s unit scored five PPG’s in the first 10 games, as opposed to just one in the seven following.

From his perspective though, overall, he’s felt that the chances have been there and that can be a good sign of things to come.

“I think as long as you get the chance this is a good thing, I know I can put the puck in the net,” Kempe said. “Sometimes you have games where it’s not going your way, one game I think I hit the crossbar three times, so I mean, it’s just one of those moments. I think the key for me was to stay positive and as I said, as long as I get the chances, I feel like I’m gonna put it in the at the at one point. A little bit of a lucky bounce last game, but it was good for my confidence and for my game as well.”

From a coaching perspective, McLellan believes that Kempe is handling his quieter offensive spells better than he did as a younger player and the other parts of his game allow him to contribute even when he’s not scoring. It’s an area he’s grown in, both in terms of shortening those dry spells and in contributing in other ways.

“Forecheck, penalty kill, speed, playmaking, puck retrievals, shot blocking, I can go on and on and he does a lot of those things,” McLellan added. “Yeah, we’d like to see him score consistently, but his spread being a young player and not scoring was a lot wider than it is now, being a more mature player. He’s handling the dry spells better and he’s able to use those other assets to be a good player for us when he isn’t scoring.”

TNT, I’m Dynamite
Lastly, Insiders, TNT Studio Host Liam McHugh joined the Tradin’ Jabs program in advance of tonight’s game on TNT. McHugh talks about Working with Wayne Gretzky, his appreciation for the importance Jonathan Quick, Anze Kopitar and Drew Doughty have to the organization, as well as the shy-high ceiling for Kevin Fiala.

An extended cut is embedded below, with a link to the full audio file. A good preview as McHugh and the TNT crew call tonight’s game from Edmonton.

I should be used to these 8 PM local starts from last season’s playoffs, but alas, here we are waiting until 8 PM and I’m mad. Oh well. Kings and Oilers, coming your way next!