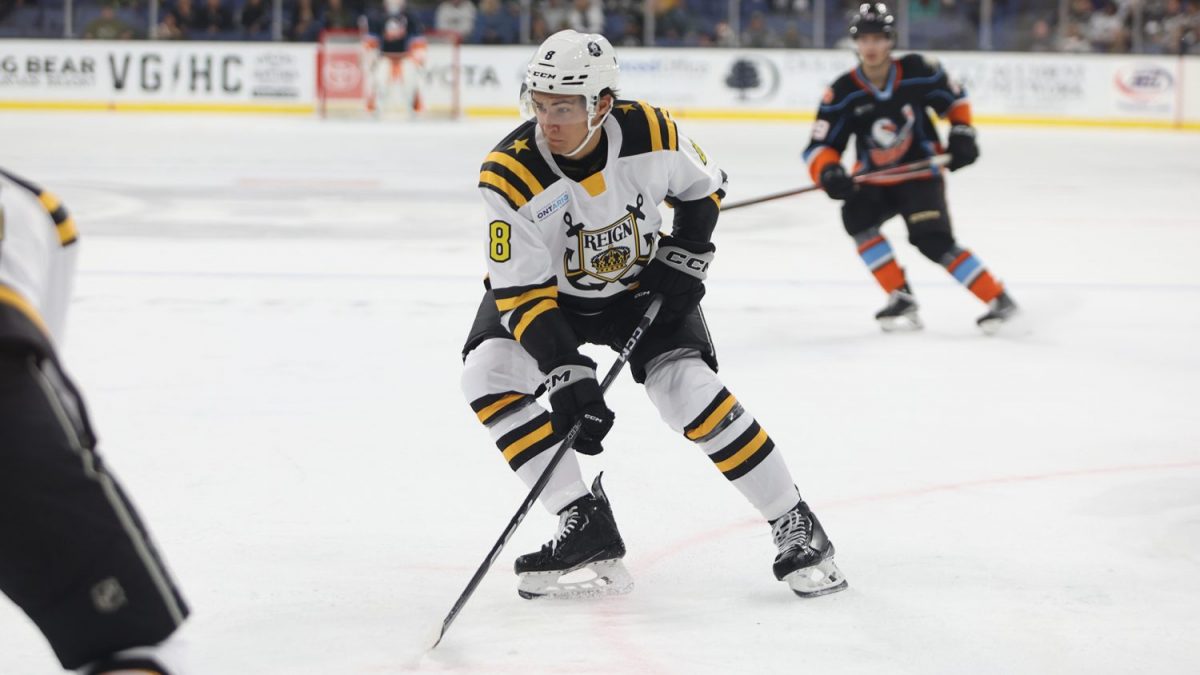 Three goals in the first five minutes of the second period were enough for the San Diego Gulls (5-8-0) to defeat the Ontario Reign (7-4-0-1) Sunday afternoon at Toyota Arena. The game ended in a 4-1 score, with Gulls’ goaltender Lukas Dostal turning aside 28 shots while allowing just a single goal to Ontario’s Aidan Dudas in the third period.

The Reign played a scoreless first period with their opponent for the third straight game, outshooting San Diego 9-5 in the opening frame, but couldn’t get anything past Dostal early on. The Gulls had some of the best chances early on, including a lengthy 5-on-3 power play opportunity, but Copley shut the door on that by denying any opportunity that came his way.

Things were different in the second period, however, as Rocco Grimaldi scored just 22 seconds into the stanza on a one-timer off a feed by Groulx. Jacob Perreault extended the Gulls lead to 2-0 at 4:40 of the frame, knocking home a rebound Copley turned out his first attempt. Then just 14 seconds after Perreault’s goal Luke Profaca came out of the penalty box and slipped past Ontario’s defensive coverage, making it 3-0 in favor of San Diego.

The second period was also filled with penalties, as the two teams combined for 13 infractions and 56 penalty minutes in total. Ontario did a nice job on the penalty kill during the contest, discarding five of the Gulls’ six man-advantages. But they were unable to score on any of their own chances, finishing the game 0-for-4 on the power play.

The Reign spent most of the third period trying to find a way to get a puck past Dostal, and finally found the back of the net when Dudas pounced on a loose rebound off a shot by Jordan Spence that was stopped. Taylor Ward was credited with the second assist on the play.

But the Reign were unable to muster any more offense in the contest and allowed an empty-net goal to Nikolas Brouillard during the final minute of regulation when they pulled Copley in favor of an extra attacker. Ontario held a shots-on-goal edge of 29-22 in the game.

The Reign are back in action next week for a home-and-home series with the Henderson Silver Knights that begins on Saturday in Henderson and concludes Sunday afternoon with Hockey Fights Cancer at Toyota Arena in Ontario. Both games will begin at 3 p.m.

Marco Sturm
On the team’s current four-game losing streak
It’s been four different games, but pretty similar for some reason. I think we got really comfortable. We were playing well. Give the guys credit. I think in Colorado, the second game, that was the first time we really got pushed back and we had no answer. That carried on over to San Jose. In the last two games, it was just lots of frustration because the guys are used to playing a different style of game. I think we just have to find our game back. Some guys have to realize that they have to give more and contribute to all areas of the game.

On having players return to the lineup
It’s always good. They’re all good players. With Byfield and Turcotte coming back, we love it. But again, we’ve got to give them time too. You could see it with Clarke too. He didn’t get to play for a while. It took him 40 minutes today to really get going. Chromiak too. He still needs time. We need to be patient a little bit. We try to help them get going as soon as possible.

On establishing the Kings system in the AHL
I think that’s part of the reason I was hired here [in Ontario]. We believe in our system. I believe in our system, and so far we’ve done a good job but now we are getting away from our system, what made us so good. It’s just mental breakdowns. The guys work but are sometimes not smart enough. I know the guys were tired today because it was a quick turnaround, but we made mistakes today. We never really got into our structure and frustrated the other team like we have the last couple of weeks. Now it has reversed. Now we get frustrated and we totally get away from our structure. That’s something we have to show [the players] and explain and teach. And we have to get better.