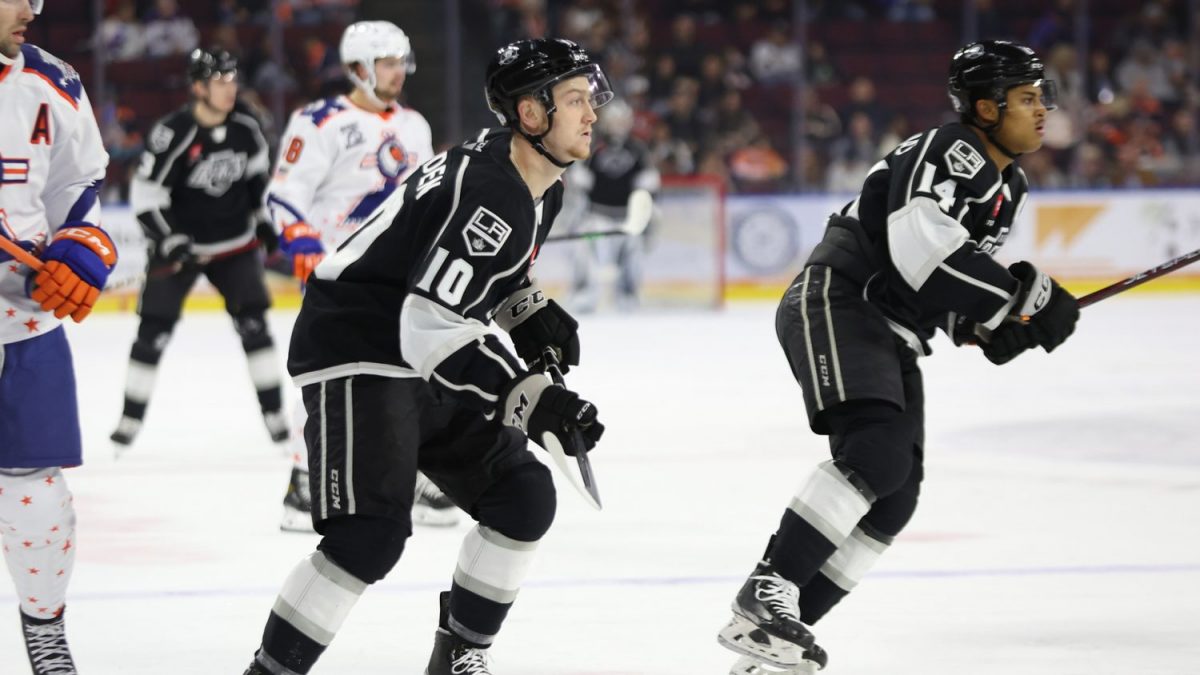 The Bakersfield Condors (7-3-1-0) successfully defended home ice Saturday night, defeating the Ontario Reign (7-3-0-1) by a 3-1 score at Mechanics Bank Arena. The two teams now have identical records after their first 11 games and are tied atop the AHL’s Pacific Division standings, each with 15 points.

Quinton Byfield had Ontario’s lone goal in the contest, scoring his first of the season at 11:21 of the second period. Matt Villalta got the start in net for the Reign and stopped 19 Bakersfield shots in a losing effort.

Neither team was able to put a goal on the board in the first, but each had looks in their respective offensive ends. The best opportunity of the period came in the final moments of the frame as the Condors found Seth Griffith open for a partial breakaway rush, but his chance glanced off the post to the right of Villalta.

Filip Engaras changed the game in the second, scoring twice in a span of 10 seconds to give Bakersfield a commanding 2-0 lead. Engaras’ first came on a deflection from the slot and after a faceoff win for the Condors, he beat Vilallta over the blocker with a wrist shot from the right circle.

Byfield got Ontario back within a goal five minutes later when he buried an open opportunity in front of the net after a smooth deke to his backhand. Assists on the tally went to forwards Alan Quine and Alex Turcotte, who got on the scoresheet for the first time this season in his second appearance.

At 5:48 of the third, Bakersfield’s Brad Malone won a race to the puck and was all alone on a rush into the Reign end. He missed the net with his first shot but banked the rebound in off of Villalta to give the Condors an insurance goal that put them back in front by two for good.

Olivier Rodrigue earned the win in between the pipes for Bakersfield, defeating Ontario for the second time this season with 27 saves. The Reign outshot the Condors 28-22 on the night, while both clubs were unsuccessful on the power play.

Ontario returns home Sunday afternoon to Toyota Arena for a matchup with the San Diego Gulls and their annual Salute To Service at 3 p.m.

Marco Sturm
On Bakersfield’s game plan that limited offense
They kept it pretty simple. They’ve done it a couple of times and it’s how they win games and it’s a good hockey team and they’re on the same page. We weren’t, and that was the difference.

On the team’s mentality and power play chances
We have to score, I mean we have like 10 minutes left in the game and a big power play was coming up and we just didn’t score. But in general, I think we never felt like we were going to win this game today. Not on the bench, not on the ice. Again, we were not on the same page.

On the play of Byfield, who played in his second AHL game this season
Q is a good player. He was out for a few weeks because of illness. I still think he can play a lot better. I’m glad he scored today though, it always helps a player. We try to work with him and give him a lot of ice time and get back to his “A” game. It was a good goal, but I think there’s more in him.

On what he’s seen in Turcotte’s game since he returned
Same thing with Turc and it’s even worse with him because he’s been out for a long time and we all felt bad but he’s working hard and he’s trying. I think the one thing I told him and we all have asked of him is to just keep it simple and that’s what he does. Is he the same Turc yet? No. But he does he job and I’m glad he’s back playing hockey. We will help him along the way but I think with him we have to be patient.