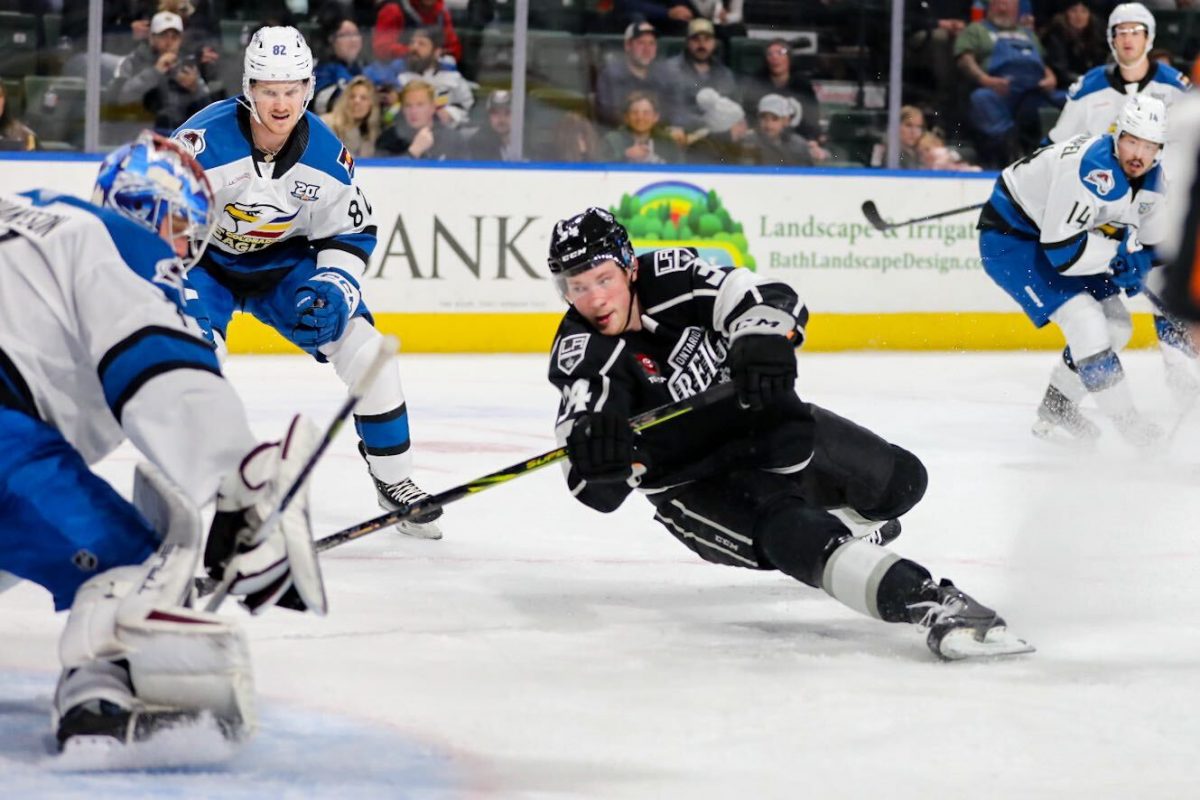 TONIGHT’S MATCHUP: The Ontario Reign take on the Colorado Eagles for the second time in three nights Saturday evening, completing a series in Loveland this week. Ontario’s furthest road trip to date began Thursday with a 2-0 shutout of Colorado, earning a little revenge against the club that ended their Calder Cup Playoff run last spring in the second round. That series saw the Eagles pull off a three-game sweep to advance to the Pacific Division Finals where they eventually fell to the Stockton Heat. Last season the Reign finished with a 2-3-1-0 record in six contests against the Eagles.

WHAT TO WATCH FOR: Ontario comes into Saturday’s tilt having won six consecutive games, its longest winning streak since they had an eight-game run a year ago from Oct. 19 to Nov. 7, 2021. Colorado has lost four of its last five outings. The Reign currently sit at the top of the overall AHL standings with 14 points and a winning percentage of 0.875, while ranking first defensively with an average of just 1.75 goals allowed per game. Ontario has also fared well on the offensive end, scoring an average of 3.75 goals per contest which ranks seventh in the AHL. The Eagles have had success when taking an early lead, going 3-1-0 after scoring the first goal.

LAST TIME OUT: Matt Villalta stopped all 31 shots he faced to record his second-career AHL shutout in a 2-0 blanking of the Colorado Eagles by the Ontario Reign on Thursday night at the Budweiser Events Center. Both Ontario goals were scored by Lias Andersson in the second period, each with an assist from former Eagles forward and current Reign captain TJ Tynan. Ontario has now won six straight games and continues to lead the Pacific Division with 14 points in the standings.

SECOND PERIOD SUCCESS: The Reign have been dominant during second periods this season, outscoring opponents by a 15-2 margin which is the largest positive goal differential for any team in a single period this season. The two goals allowed by Ontario is also the lowest total surrendered during the second period in the AHL. In their last four games alone, the Reign have put up 10 goals in the middle frame and have allowed just one.

SCOUTING THE EAGLES: The AHL affiliate of the NHL’s Colorado Avalanche, the Eagles have had many personnel changes to the team that had success last season, with multiple players finding roles at the highest level with the defending Stanley Cup Champions. Standout returners include Jean-Luc Foudy, who has posted seven points in eight games this season on three goals and four assists, as well as former first round pick Shane Bowers, who has six points (2-4=6). Captain Jayson Megna is also back for another year, as well as defenseman Keaton Middleton. Through eight games, forward Charles Hudon, who spent last season with the Syracuse Crunch, leads the team with eight points on four goals and four assists. Veteran defenseman Brad Hunt has paced the team’s blueliners with five points on two goals and three assists. In goal, Justus Annunen has played five games while Jonas Johansson has started three times. Annunen has been in goal for each of the team’s three wins, while Johansson has the better goals-against average at 2.73.

LEARN FROM LIAS: Reign forward Lias Andersson had a breakout performance Thursday night, scoring both of Ontario’s goals in the 2-0 victory. It was the Smogen, Sweden native’s first multi-goal effort since he netted two in consecutive games with Ontario last season on March 2 and 4. This season, two of Andersson’s three goals have come via the power play and his six points are tied for fourth-most on the team. The sixth-year pro recently played in his 100th AHL game last week and has posted 68 points on 30 goals and 38 assists during his time in the league.

VILLALTA AT THE TOP OF HIS GAME: Goaltender Matt Villalta secured his first clean slate Thursday since April 24, 2021, when he turned aside 34 shots in Bakersfield to blank the Condors. The Godfrey, Ont. native has gotten off to a hot start this season, winning all three of his appearances while allowing just four total goals to earn a goals-against average of 1.33 and a 0.958 save percentage. Villalta is also coming off a standout season last year when he posted a 28-10-7 record in 46 games with a career-best 2.98 goals-against and a 0.903 save percentage.

T.J. THE GREAT: After being held off the scoresheet in consecutive games last week, Reign captain TJ Tynan rebounded with a pair of two-assist performances in his last two outings and is now in a tie for third in the AHL with 12 points this season. Most recently, Tynan posted assists on both of Lias Andersson’s goals during a 2-0 shutout win in Colorado on Thursday. The Orland Park, Ill. native leads all league skaters with 11 assists in eight contests this season. Six of his helpers have come on the power play, which is tied with teammate Jordan Spence and four others as the most in the league.