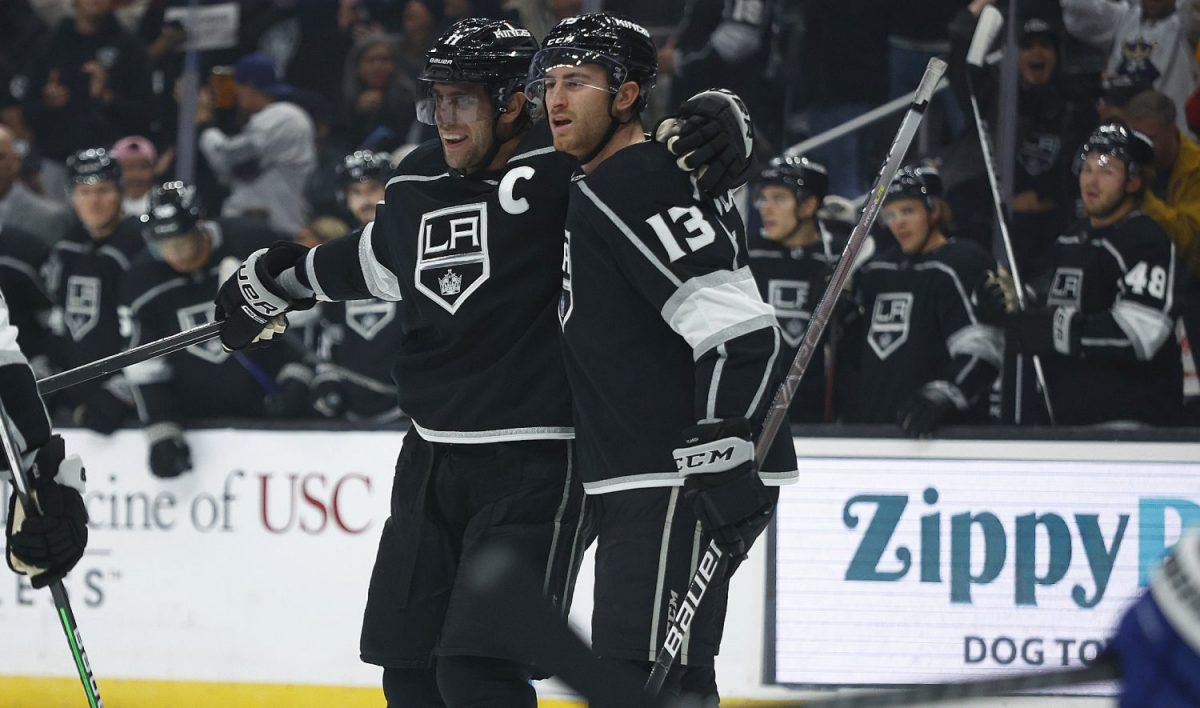 The t̶i̶m̶e̶s̶ lines, they are a-changing, Insiders.

If last night’s promotion was Grateful Dead night as the Kings hosted Winnipeg then consider this morning’s practice to be Bob Dylan Day. Changes were certainly alluded during yesterday’s post-game press conference and we certainly got a few this morning as the Kings prepare to host Toronto tomorrow evening.

Todd McLellan expressed last night that we could see changes starting with the top line, which has consisted of Anze Kopitar at center between Kevin Fiala and Adrian Kempe on the wings for the first nine games of the season. You can’t say it’s been disastrous – all three players have seven points from nine games to open the season – and as McLellan details below, the blame can’t jst be placed on Fiala. It’s also fair to say though that the line hasn’t quite reached the heights that everyone thought were attainable on paper. The line was just about even in terms of possession metrics, but high-danger chances were less favorable and five of the six goals allowed came from high-danger chances. The ingredients of that line are greater than the sum of the parts were through nine games, thus resulting in a shakeup here this morning. All three players are top-tier and hopefully moving things around can benefit all three players involved.

With that in mind, here’s how the Kings aligned earlier today –

With regards to the defensemen, we’ll see how things shake out. Todd McLellan indicated that there could be a change on the backend, though that change would likely not include a change to the personnel available, meaning that Sean Walker would be the player coming in should a change be made. Tomorrow would also mark game number nine for Brandt Clarke, if he plays, which would be the last game he could play before the first year of his entry-level contract kicks in. It’s not a do or die decision – the Kings could still opt to send Clarke to juniors after Game 10 – but it’s a natural milestone marker for the young blueliner. McLellan reiterated that a decision has not yet been made, but we will likely get there in the coming days.

Not included in that group is forward Quinton Byfield, who missed yesterday’s game with an illness. It was the second consecutive game a Kings forward has missed due to illness, following Viktor Arvidsson’s scratch on Tuesday. Byfield did take morning skate yesterday but wasn’t able to go in the evening, as he was replaced by forward Jaret Anderson-Dolan at the center position on the third line. Byfield also did not skate this morning, with the Kings showing 12 forwards and seven defensemen, and he will not play tomorrow versus Toronto.

The assumption in net is that Cal Petersen could return to the net tomorrow, but that’s for tomorrow’s game preview.

What remains to be seen is how these lineup changes could impact the power play, which we did not see groupings for during today’s practice. McLellan has referenced it twice when it came to yesterday’s first period, reiterating points from last night again this morning. The Kings gave up a shorthanded goal late in the period, in a situation where risks were not minimized, leading to several shorthanded chances against. Natural Stat Trick had just two shot attempts for Winnipeg while shorthanded in the first period, and one high-danger chance, but there were certainly more dangerous looks than that. An area we’ll look at tomorrow.

With that, direct quotes from McLellan regarding the decisions to make the lineup changes at forward, as well as Kopitar and Vilardi on their thoughts of playing with one another heading into tomorrow.

Todd McLellan on what he’s looking for from Vilardi on Line 1
Well, I think that Kevin and Gabe have a lot of similarities, they create, they have good vision and they can set people up. Right handed shot [versus] left handed shot, that often makes a big difference. Kopi’s line, and I’m not putting this all on Kevin by any means, has been out-chanced in the majority of the games they’ve played and we can’t keep going that route. Gabe will play there tomorrow and I think Gabe can make some of the plays that Kevin makes as well, but we can try and stabilize lines and maybe it’ll help Kevin with some other linemates as well.

McLellan on if he believes making Fiala the “alpha” on Line 3 could help him
Potentially. Kevin’s made some pretty good hockey plays. Juice has had a couple breakaways from the hashmarks in because of plays that Kevin made. In the offensive zone, we brought him here to be creative and to be an offensive player and with those players, there’s going to be some risk. It’s what that line is doing outside the blue line, neutral zone, d-zone that has to be a little bit better. That’s not on Fiala completely, it’s the whole group on the ice.

Gabe Vilardi on if moving to the first line has any impact on the way he plays the game
Not much changes for me, I’m going to still play the same way, try to play the same way. Two different guys with different skillsets, I guess, that will take some adjusting but I’ve played a little bit with them now, when we’ve mixed some things up at the end of games. Obviously Kopi is a playmaker, a big body, he’s going to protect pucks and Juice has a wicked shot. I’m just going to play my game and see what happens.

Anze Kopitar on what he’s seen from Vilardi’s game and how he could mix in
His skill is through the roof. He’s got to be towards the top of the league in handling the puck in tight spaces. He’s displayed it and he very rarely loses the a stick battle. I knew the skill was always there and his hockey IQ is exceptional. He’s had a couple of bad years with injuries and we always talk about confidence, which couldn’t have been very high, but he came to camp with a mission. He’s been our best player.

Just my two cents – I’ve always felt that Vilardi could be a good linemate for Kopitar. As Kopitar noted, Vilardi’s hockey IQ is outstanding and his level of understanding of the game is at such a high level. We won’t know for sure until we see how it actually plays out on paper, but Vilardi has some of the makings of a productive player in that spot. The two both think the game at a high level and play at a pace faster than their straight-line skating suggests. Perhaps this could be a good move for both, rewarding Vilardi for his production and finding a good match with the team’s top center. The hope is that this move also helps Fiala, who will now play with the hardworking duo of Lizotte and Grundstrom, at least tomorrow. Both players have been stout forecheckers, who have created good chances off of that element of their game and both are strong skaters. It’s an unknown, because we haven’t seen it, but maybe it works with Fiala as the third member. There’s also the fact that the Kings are currently without 2/3 of a third line currently in Byfield and Alex Iafallo. As those players return, it creates additional flexibility with regards to the forwards, on all four lines.

That’s all for today, Insiders. No morning skate tomorrow with a 4:00 PM game so I’ll save a couple of the wider-ranging narratives for tomorrow’s game preview. The most glaring note, and focus, from today was the changes to the forward lines, which was what I prioritized getting out this afternoon.

By Zach Dooley
90 Comments
Behind the Scenes