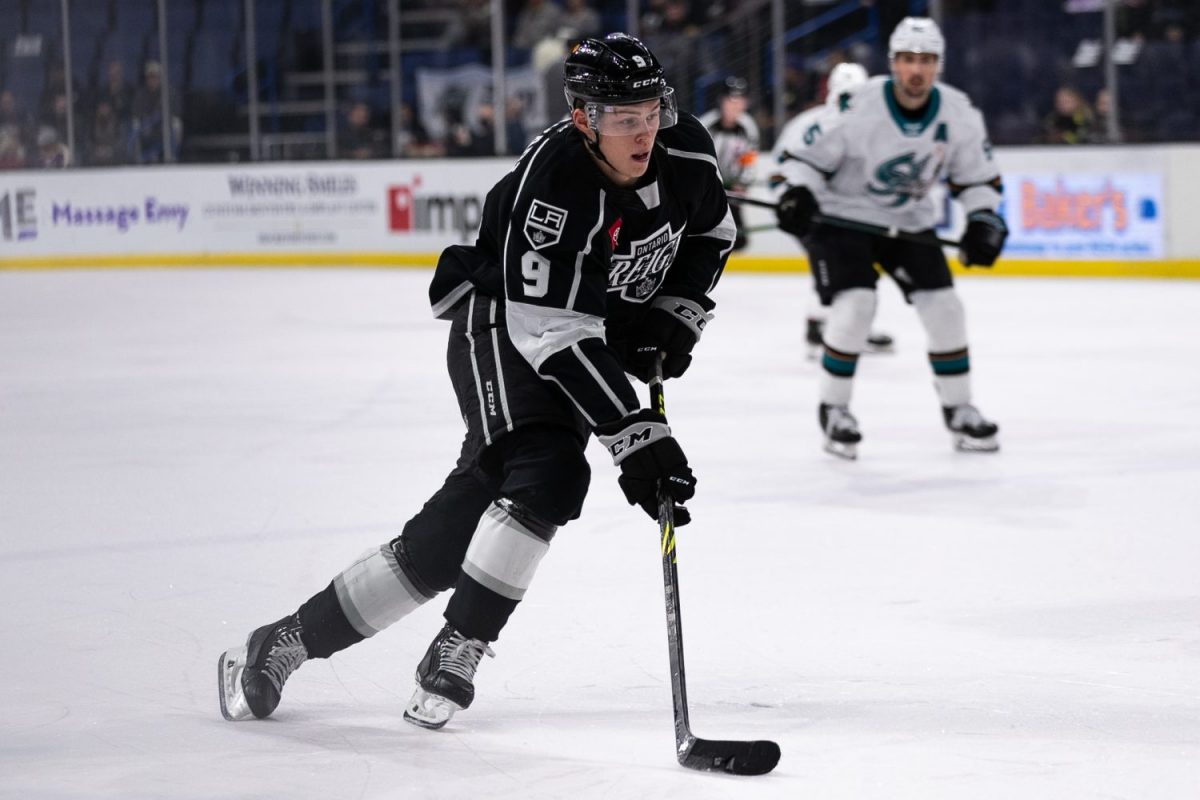 TONIGHT’S MATCHUP: The Ontario Reign travel to San Jose and face the Barracuda for the first time this season Wednesday night at Tech CU Arena. It will also be the first time Ontario and San Jose battle at the newly opened home of the Barracuda. The Reign come into the matchup with a three-game winning streak after pulling off a sweep of the San Diego Gulls in a home-and-home series last weekend, while San Jose holds an unblemished 4-0-0 record on the season. A year ago during 2021-22, Ontario posted a 5-0-1 mark in six contests against the Cuda.

WHAT TO WATCH FOR: Tonight’s game is a showdown between the top two clubs in the AHL’s Pacific Division after the first two weeks of the season. San Jose has yet to lose any points and is one of two teams remaining that have a perfect 1.000 win percentage along with the Charlotte Checkers. The teams also represent the best defensive clubs in the league early this season, with San Jose allowing just six total goals in four games, an average of 1.50. The Reign are second in the league in average goals allowed, having been scored against 10 times in five games (2.00). Those numbers are particularly impressive, as the two teams are among the lowest in the league in shots allowed per game, with Ontario ranking 24th while allowing an average of 32 chances against while San Jose is 28th at 34.5.

LAST TIME OUT: Jacob Doty and Rasmus Kupari each netted a goal and an assist and goaltender Matt Villalta stopped 33 shots as the Ontario Reign defeated the San Diego Gulls by a 5-1 score Saturday night at Toyota Arena to claim a sweep of their most heated rival in a home-and-home series this weekend. Ontario also got goals from Austin Wagner, Aidan Dudas and Samuel Fagemo in the victory, while Jordan Spence collected two primary assists. After their first five games of the season, the Reign have earned eight points and lead the Pacific Division standings.

SECOND PERIOD SUCCESS: The Reign have been dominant during second periods this season, outscoring opponents by an 8-1 margin, the largest positive goal differential for any team in a single period this season. The single goal allowed by Ontario is also the lowest total surrendered during the second period in the AHL. For an example of this prowess, look no further than the club’s most recent game, where they outscored San Diego 3-0 in the second period of Saturday’s 5-1 win. The only goal scored on Ontario during the second so far in five games this season came from Bakersfield’s James Hamblin on Oct. 16.

SCOUTING THE BARRACUDA: San Jose made a change behind the bench during the offseason, promoting John McCarthy as its new head coach. McCarthy holds all major Barracuda franchise records as a player, including games played (275), goals (62), assists (76), points (138), and shorthanded goals (5). He served as the Barracuda team captain from 2016-2019. It’s been so far so good for the Cuda, as they’ve secured wins in all four of their games to begin the season with a pair of victories over Iowa and Henderson, respectively. There are many new faces in San Jose this season, but an important returnee up front is Scott Reedy, who was one of the team’s offensive weapons a year ago before earning a call to the NHL with the Sharks, scoring 27 points in 38 games on 18 goals and nine assists. Highly thought of rookie Thomas Bordeleau has come as advertised, scoring three goals in his first four games to lead the team. On defense, veteran Derrick Pouliot has led the way with four assists and a plus-4 rating. In goal, San Jose has gotten excellent play from both veteran Aaron Dell and rookie Eetu Makiniemi, who have played two games apiece while each has only allowed three goals.

RIGHT ON QUINE: Reign forward Alan Quine has had a knack for the net early in the season and scored the game-winning goal in the third period during consecutive outings for Ontario last week. Quine’s first goal in a Reign sweater came last Tuesday night at 4:15 of the third when he followed up a rush by Rasmus Kupari that saw the center draw multiple Henderson defenders to him, leaving the veteran open for a drop pass that he put into the net. He followed up with another third period strike on Friday in San Diego, stepping off the bench to take a pass from TJ Tynan that went through a defender’s legs and wristed the puck past the glove of goaltender Lukas Dostal. Including the two assists he produced on opening night and another helper on a Rasmus Kupari goal Saturday, Quine is now third on the Reign in scoring with five points from his first five games this season (2-3=5).

DOMINANT DOTY: Forward Jacob Doty had just the second multi-point game of his AHL career with a goal and an assist in Saturday night’s win. Doty’s goal, his first since March of last season, came on an individual-effort play that saw him create a steal from a San Diego skater before using his backhand to stuff the puck into the net. Doty’s last multi-point game came on Dec. 2, 2015, when he earned two assists for the Chicago Wolves in a win over the Manitoba Moose. So far in just five games this year Doty has equaled his point total from all of last season, three, when he appeared in 41 contests and posted a goal and two assists.

DUDAS DELIVERS: Forward Aidan Dudas has been at his best to open the 2022-23 season, scoring four points in the Reign’s first five games. The Parry Sound, Ont. native has been on the scoresheet in three straight contests, matching the longest point streak of his AHL career. Three of the attacker’s points have been goals, including a tally on opening night, as well as markers in each game of the team’s two-game sweep over San Diego last weekend. Now in his third pro season, Dudas has appeared in 109 career games with Ontario, scoring 40 points on 19 goals and 21 assists. He had career highs last season with 10 goals, 13 assists and 23 points.