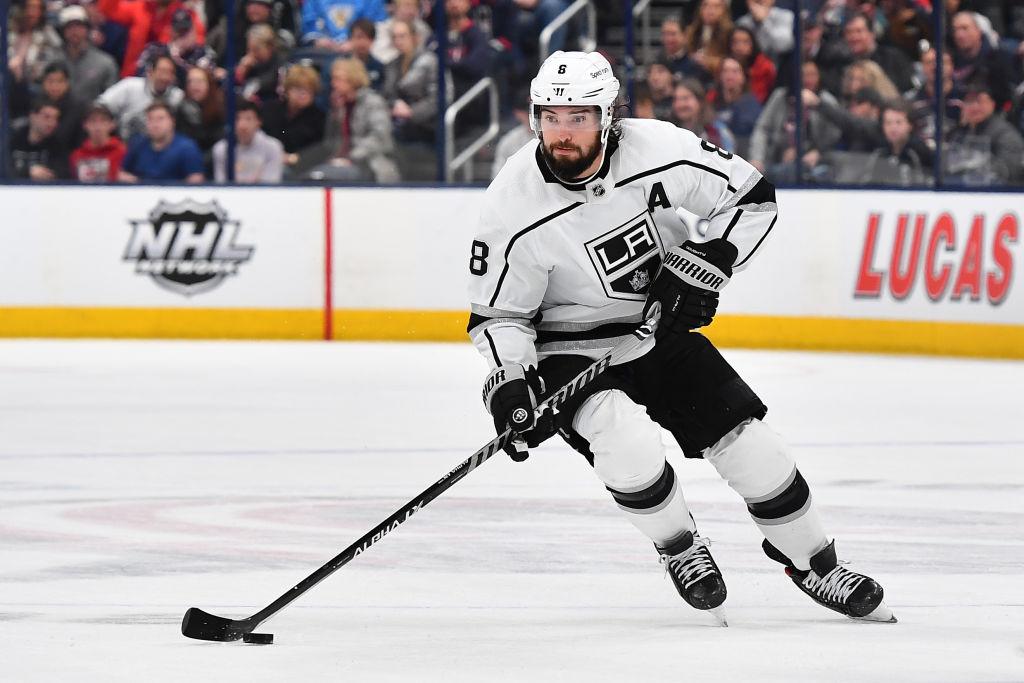 Last season saw the LA Kings rank 28th in points by defensemen, with only the Detroit Red Wings getting fewer goals from their blueliners than the 21 scored by the Kings.

The Kings haven’t placed higher than 25th in that area since the 2017-18 season, typically ranking among the NHL’s bottom-five teams in that category. Last season, it was not a deterrent for a team that qualified for the postseason, but it was still a question frequently asked, which was can the players on the backend produce more offensively, especially beyond Drew Doughty who had strong numbers when he was in the lineup.

We’re seven games into the 2022-23 season and the Kings have, in the early goings, gotten more contributions from the backend with five goals and 14 points in the early stages of the season, tied for seventh most in the league. On the other side of the coin, however, the Kings have conceded the most goals in the NHL and the fifth most on a per-game basis, compared to last season when they ranked in the top ten at the positive end of the rankings.

That begs the question……can the Kings have one without the other? That’s the balance they’re currently in search of.

“I hope we can,” Kings Head Coach Todd McLellan said. “We’ve allowed our D to be aggressive, with that in mind. It coincides with the forwards being responsible as the D are aggressive. We’ve offensively had some reward for that, but we’ve also paid the price at the other end. At some point there has to be a balance.”

The Kings have maintained their desire to be a team that is defensively sound first and foremost, despite the issues early in the season. Regardless of whether this team’s squad ultimately adopts that identity or not, the odds are that the goals against will drop down over time as things regress towards the mean. The team that allowed the most goals in the NHL last season – Montreal – averaged 3.87 against per game and no team has been over four in the last ten years, a stretch I’m sure is actually longer if we needed to go further in time back to prove a point. And that’s the highest figure in that ten-year span, so unless the Kings went from a Top-10 team in the league defensively to the worst team in ten years overnight, we can expect to see that number drop as we go on.

Speaking with Drew Doughty, he firmly expressed that defending is priority one when it comes to the defensive corps. For Doughty, jumping in offensively has to be executed the right way while minimizing the risks of doing so. That boils down to hockey sense and awareness, as well as execution.

“That’s our job as defenseman, that’s what we’re supposed to do, we’re supposed to defend the other team,” Doughty said. “Yeah, we’re supposed to get some points too and be more offensive but we need to get back to playing better defense, that’s really what our weakness is right now and we need to sharpen it up. It’s easy to balance the two out, don’t take high risks, make the right play at the right time and when you can jump in offensively, you can’t jump in and create offense from nothing, you’ve got to be smart about it.”

Doughty believes that if he and the rest of the defensemen do the right things, offensive production will come along with it.

That’s not to say, however, it’s not all just on the defensemen. It’s a full-team effort. As McLellan said, the defensemen have an instruction to be aggressive on the forecheck and it needs to be done at the right times, but with that aggressive direction comes the need for forwards to cover back responsibly.

In speaking with Mikey Anderson, who has noticeably activated more in the o-zone this season to keep plays going, the forecheck is a big area for him to be able to contribute offensively as situations dictate. With the activation is a need for a five-man unit to cover and contribute, which the Kings are still sorting through.

“A big part of it is forecheck, trying to keep a play alive if it comes out the weak side or if there’s a way for us to try and help out, I think the coaches want us doing that,” Anderson explained. “I think we’ve gotten more comfortable with the structure and as a group, we’re comfortable with each other where we’re confident and trusting that the forwards to cover for us.” 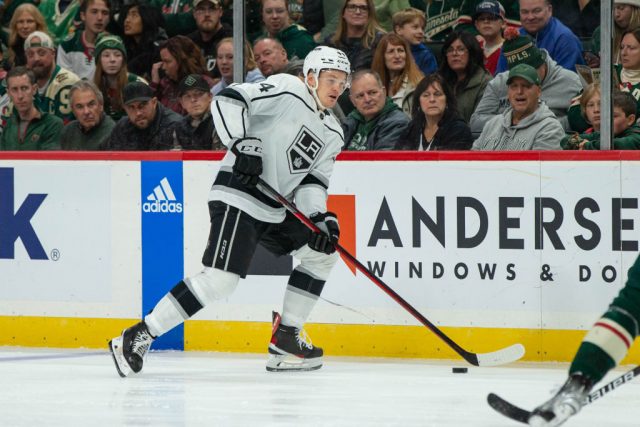 Doughty saw that exchange as a shortcoming during the game in Pittsburgh when the Kings were pinged for six goals against.

He shared the responsbility throughout the group, as a leader does, in acknowledging that the defensemen need to use their aggression at the right times, while there also needs to be cover from the forwards in those situations as well.

“In the Pittsburgh game, the decisions we were making offensively were affecting us defensively,” he said. “I know the game was kind of out of our hands, so maybe that’s why it was happening, but it was happening way too often. We were losing guys for 3-on-2’s, 2-on-1’s, breakaways against. If we want to be more aggressive, we need them to cover and we need to be smarter about our aggression as well.”

Last season, the Kings frequently played at the right end of the ice. That did not translate regularly to points from the backend, but the Kings were a volume shooting team that lacked offensive explosion as a whole. This year’s squad, with offseason additions and the internal growth we’ve seen here early in the season from a handful of young forwards, is built to potentially be better at finishing and score goals than last season’s team was. If that comes along, Doughty believes the points can continue to flow for defensemen, even with the priority being on defending.

“We do need to help with the offense, there’s no doubt about that, but our main priority is defending our end,” he added. “Usually if you do all the right things and play the right way, points will come your way. Maybe not as much in our organization because we’re more of a defense-oriented team, but we need to get it back.”

Through the first seven games, the Kings have found five goals from the backend, including three from Matt Roy, who netted just twice during the enterity of the 2021-22 season. Roy’s goal against Minnesota was a straight forward point shot with traffic, though both goals he scored against Nashville were a result of rushes that were well-timed, as he joined the play to create an odd-man scenario and finished when given the opportunity.

“He’s got a really heavy shot and we’re asking him to use it more, I think we saw that [in Nashville],” McLellan said of Roy. “He has some confidence and our D has been in flux a little bit, trying to find steady partner, but I think [the offense] is in Matt’s game. He’s shown that in the past and we saw it [in Nashville].”

Roy is traditionally thought of as that defensive-first, shutdown type of defenseman and that has been reflective in his metrics. Roy ranked inside the Top-10 over the last two seasons in terms of fewest goals allowed per/60 at even strength and that includes the 2020-21 season, when the Kings were not a playoff team. That’s been the M.O. on the backend for the Kings – defense first, while moving pucks to the forwards to create offensively.

Take his partner, Sean Durzi, as an example of a player who is more offensively minded. Durzi ranked fourth in the NHL in points by a rookie defenseman last season and has four (1-3-4) from six games here in 2022-23. That’s tied with Roy for the team lead with both defenseman among the Top-20 across the NHL. Despite a different skillset, Durzi still understands what the Kings want to do as a unit.

“I think if we do a good job with that it’ll allow the defense to contribute offensively, that’ll come in spurts,” Durzi said. “You want to help offensively but I think our identity is being defensively responsible, so it’s something we’ll take care of.”

That brings us back to the question posed at the top of the article, which is asking if the can Kings continue with an uptick in offensive production from their defensemen, while also lowering the number of goals they’re allowing.

Doughty spoke about the importance of decision making and reads, with Durzi was inclined to agree. Should those sides come together, it doesn’t have to be a situation of one or the other.

“They don’t have to affect each other, but obviously that happens when we jump in at the wrong times and things like that,” Durzi added. “We have a pretty defensively responsible identity and that’s something we’ll stick to. It’ll allow us to play offense and have the right cover for when we’re defending.”

Moving forward, the Kings know they need to strike that better balance between maintaining their current level of point production from the blueline and lowering the number of goals they’re currently conceding at the other end of the ice.

As noted above, the Kings won’t average nearly four and a half goals against for the entirety of the season, so natural improvements will come. But they’ll certainly come a lot faster as the things that players and coaches are noticing within the game start to get corrected, with the focus starting with Tampa Bay in town tomorrow night. 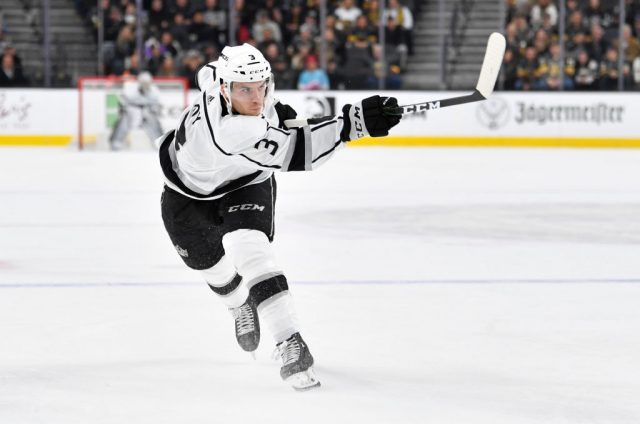