High scoring forwards have Ontario Reign off to hot start 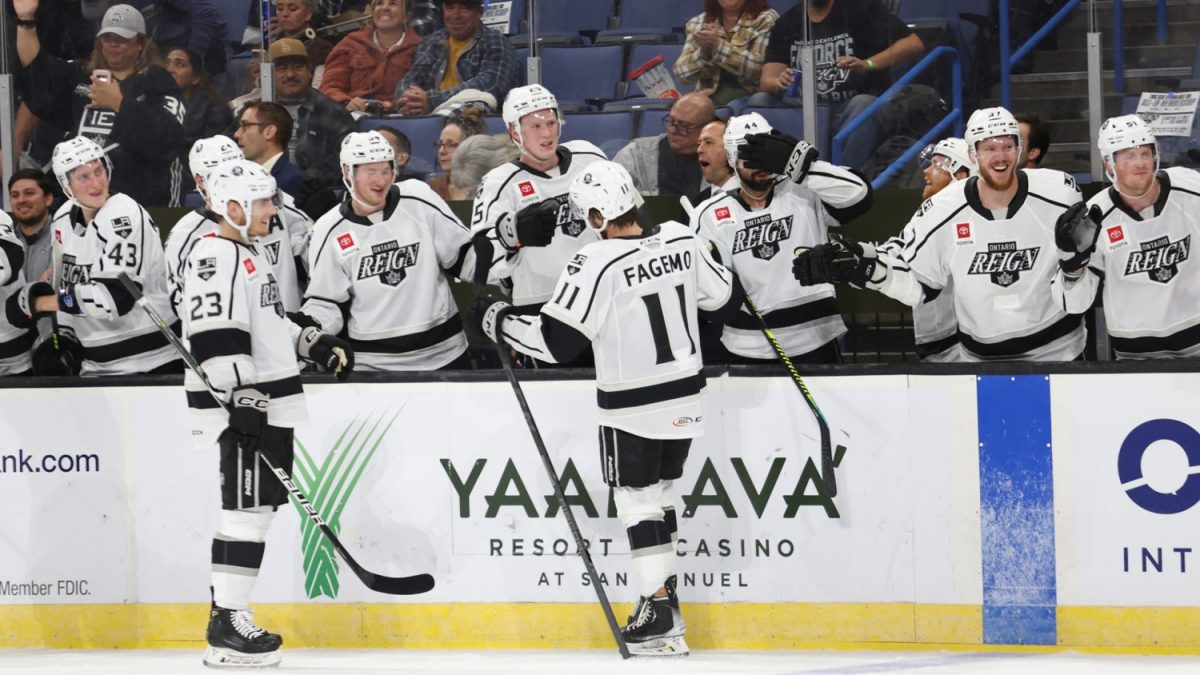 Through three games at home to begin the season, the Ontario Reign have had no shortage of offensive firepower and much of it has come from names Reign and Kings fans are familiar with.

The team began the new campaign with an eight-goal outburst Friday night in a convincing 8-2 rout of Abbotsford. A loss to Bakersfield on Sunday included a pair of tallies from Samuel Fagmeo, but Ontario rebounded with a five-spot on Tuesday to defeat Henderson. Of the 15 total goals, 13 have come from forwards up front.

Let’s take a deeper look at the success of a few of those attackers who are all part of a deep offensive group for the Reign, while at the same time in competition with each other for the next potential call-up to LA.

One thing’s for sure, Fagemo has come into games with an intention of using his best weapon, his shot. His shoot-first mentality has been noticeable, specifically in Sunday’s game, when in addition to scoring twice, he led the team with six shots on goal and had another two attempts that glanced off the post.

He’s also being put in a position to succeed, on the right wing of the two-time reigning AHL Most Valuable player in TJ Tynan along with another highly talented playmaker in Lias Andersson on left wing. Finding a way for Fagemo to get those chances is something the Reign coaching staff is certainly focused on.

“He was pretty good,” Sturm said of Fagemo after Sunday’s game. “I thought him and Tynan had a really good game. With his shot, he’s so dangerous at five-on-five and five-on-four. Now, we have to find a way to get him even more shots like that.”

Fagemo’s 10 shots on goal are the most of any forward, as are his three tallies. While he may still be adjusting to his linemates, he knows he’s in a position others could be envious of.

“It feels better and better each game here, Fagemo said. It’s such an honor to play with those guys, I’m just trying to do my best and shoot the puck and be at the right places at the right times.”

The next step for the Goteborg, Sweden native may be to add some more strength and physicality to his game. It’s something he’s already discussed with management and he’s aware of.

“I think I’m playing big minutes right now,” Fagemo said. “It feels good out there and I’m just trying to improve in that area too. I think I can be even better at it.”

The 6-foot, 200-pounder isn’t too undersized, but his strength isn’t yet an asset of his game that will make him stand out in the NHL.

“He’s not really tall, not really big, so I think he needs to get a little bit stronger and play like a big guy,” Sturm said. “He has the shot, I think he has the hands for it, now we just need to make sure that he gets stronger and get maybe on a faster pace to play in the NHL. Sometimes it takes a little bit of time, but we try to work with him every day because he has something. So we just try to get his engine going and maybe get him to the next level.”

After two quieter games to begin the season where he was held off the scoresheet, Kupari broke out on Tuesday, picking up three points with a game-tying second period power play goal and two first assists on key goals in the third period. His performance in the team’s second victory was worthy of first star honors, which he received after the game.

In his postgame comments, Sturm mentioned that he thought Kupari and his linemates were “outstanding”.  It’s a small sample size this season, but it’s become clear that the 22-year-old has his most success offensively when he attacks the net. No better example of that was on the goal he set up for Alan Quine which provided Ontario some insurance on their third period lead. Starting in the defensive zone, Kupari read a play and stepped in the way of a pass, deflecting the puck free to himself. He then quickly skated all the way up the ice and attracted 2-3 Silver Knights skaters to his attack. When he got closer to the net, the Finland native drifted over to the left side before dropping the puck back to an open Quine, who had the entire net to shoot at for the finish.

Kupari’s second assist of Tuesday’s third period also started with a play in the defensive zone, which allowed the Reign to secure possession and move forward toward Henderson’s empty net. Unselfishly, he fed a pass to Nate Thompson for the strike, who secured his first goal with Ontario.

Already with 64 NHL games to his credit, Kupari is an option for the Kings to recall at any time and be confident that he’ll fit in well. But to become an impact player at the next level, he’ll need to show the consistency he had in Tuesday’s win.

The former seventh overall selection in the 2017 draft is a big-name addition to Ontario’s top line and has quickly posted a point-per-game with a goal and two assists in the first week of the season.

Playing on the left wing with Tynan and Fagemo, Andersson found a loose rebound in front of the net to score on the power play Friday, before assisting on both of Fagemo’s goals Sunday afternoon. The net-front location is where Andersson fit, and dominated, during his brief conditioning stint with the Reign last season, scoring six times in just four games.

“We had him with the Kings too and when he played on the power play, he was the net-front guy because we already saw that that’s a good spot for him,” Sturm said after Andersson’s goal on Friday. “He’s very skilled, but he’s not afraid to go to the dirty areas so he deserved that rebound goal and that shows what kind of player he is.”

Well we know @liasandersson has been looking forward to tonight! pic.twitter.com/pBjnxkK01m

The net-front was also where Andersson stood when Fagemo scored his first goal on Sunday. A loose rebound off a long-range shot by Tynan was free in the crease and if Fagemo hadn’t gotten there first, Andersson was surely in position to get rewarded a second time. His second helper of the night was also of the primary variety, feeding Fagemo for a cross-seam one-timer on the rush that was perfectly executed all the way around.

Ontario hasn’t seen a game go past regulation yet, but having Andersson in the lineup for a potential shootout situation is also a bonus most teams would love to have. If a replacement in the NHL lineup is needed, the Kings will surely feel comfortable with the 24-year-old stepping in to fill a role.

The newest captain of the Reign hasn’t had any drop-off in his play to begin 2022-23. Tynan is averaging two assists per game and leads the AHL in overall scoring with seven points (1-6=7). Ontario’s top center is also tied with teammate Jordan Spence for the league lead in power play assists (3).

It’s the ninth professional season for the Orland Park, Ill. native, but this is his first opportunity to wear the “C” at the pro level.

“He’s our best player,” Sturm said. “On a lot of teams, the best players are the team captain. We named him as the captain because we believe in him. He also has to grow and learn how to be a captain as well, and he’s up for the challenge. He’s working on it every day and that’s what we like. Guys love him, he brings a lot to the team and guys will stick up for him.”

If there was any question about whether teammates would stick up for their new captain, that was answered immediately on opening night as multiple Reign players forced Abbotsford skaters to answer for a pair of hard hits Tynan took in the third.

“For the size he has and even the weight, I think he plays like a big man,” Sturm said. “If you’re the MVP for two years in a row, that shows you something. We are really happy to have him and I’m happy for him to have the chance to be the team captain for an organization. It’s the first time for him but he deserved it for sure.”

The 30-year-old had a good showing in the preseason with the Kings and could be called on to fill in by the big club at any time. A pair of call-ups last season saw Tynan appear in two games with LA.

Andersson and Fagemo have been the early beneficiaries of playing with the premier assist producer in the AHL, but Tynan said they make it just as easy for him.

“They’re amazing players and it’s good to see them get on the board early,” Tynan mentioned after each scored in Friday’s opener. “For me, it’s just about using my skill set to try to get them pucks where they’re comfortable and where they like it. You get Lias the puck around the net and good things are going to happen. I actually missed Sammy a couple of times today, but if you can get him some pucks, he’s got a heck of a shot. Hopefully we get better and better each day.”

It’s usually not his first option, but Tynan also has an effective shot of his own. He blasted a shot by Abbotsford goaltender Collin Delia on Friday, but it was the only one he recorded on net that night, and only one of three he’s had this season.