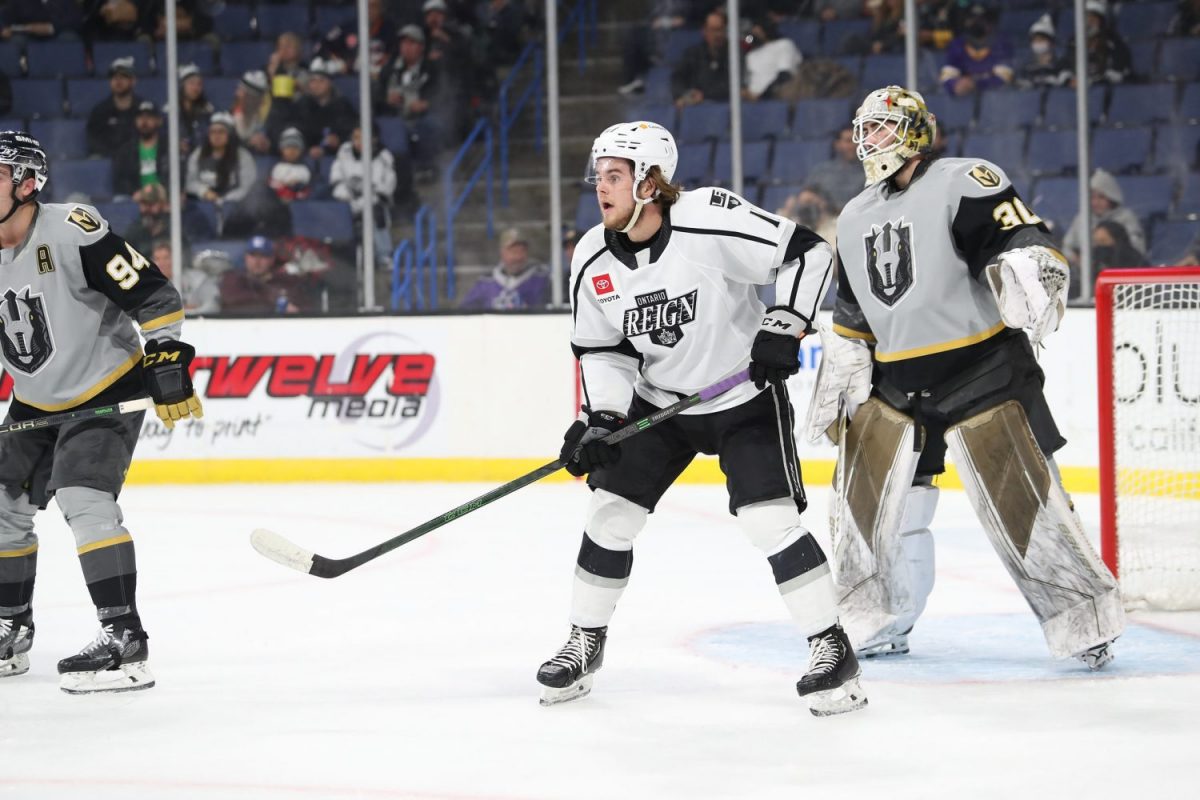 TONIGHT’S MATCHUP: In their third home game in five days, the Ontario Reign are set to battle the Henderson Silver Knights Tuesday evening at Toyota Arena. The Reign will look to start off on the right foot this season against Henderson, a team they will face eight times during 2022-23. A year ago, Ontario went 6-2-0 in their eight contests against the Silver Knights, controlling the series with a 29-20 goal differential. Both teams qualified for postseason play, with the Reign finishing second in the Pacific Division at 91 points while Henderson secured 75 points and earned the sixth seed.

WHAT TO WATCH FOR: Ontario is coming off its first loss of the season, a 3-2 defeat at the hands of the Bakersfield Condors on Sunday afternoon. Reign forward Samuel Fagemo will look to extend his hot start to the season which has seen him net three goals in the team’s first two games. Ontario could also elect to play goaltender Matt Villalta for the first time this season, who has been in a backup role during two straight starts for veteran Pheonix Copley. Henderson split a season-opening series with the Tucson Roadrunners over the weekend, falling 2-1 on Friday before bouncing back with a 6-2 win on Saturday.

LAST TIME OUT: A third period goal by Samuel Dove-McFalls pushed the Bakersfield Condors past the Ontario Reign by a final score of 3-2 at Toyota Arena on Sunday afternoon in the first meeting of the season between the two Pacific Division rivals. Samuel Fagemo had a big night for the Reign in a losing effort, scoring both of the team’s goals from linemates Lias Andersson and TJ Tynan. Fagemo is tied for the AHL lead in goal scoring after the league’s opening weekend with three tallies, while Tynan is first among all skaters with six points.

YOU CAN’T STOP THE CAPTAIN: Nothing has changed to start the season for new Reign captain TJ Tynan. Through the first weekend of the year, he’s leading the team with six points after posting a goal and three assists on Opening Night and adding a pair of helpers on Sunday. On Friday, the Orland Park, Ill. native began the new year by assisting on a power play goal by Samuel Fagemo’s in the first before adding a helper on Lias Andersson’s second period strike. Then six minutes later, Tynan took matters into his own hands and stole the puck away from a Canucks skater before wristing home his first tally of the year. Finally, he added the first assist on Tobias Bjornfot’s highlight-reel goal late in the second. It was the sixth time in Tynan’s career that he earned four points in a game. The reigning back-to-back MVP picked up assists on both of Fagemo’s goals Sunday and is currently tied for the AHL lead in scoring.

SCOUTING THE SILVER KNIGHTS: The AHL affiliate of the NHL’s Vegas Golden Knights, Henderson is aiming to get back to the top of the Pacific Division after a down year in 2021-22. In their first-ever campaign during the shortened 2021 season, the Silver Knights were at the top of the heap. But year two was more of a struggle filled with ups and downs. The team’s leading scorer from last season Pavel Dorofeyev is back for another run and has already netted two goals for Henderson in the club’s first two games. He was the lone attacker to reach the 50-point plateau a year ago, posting 27 goals and 25 assists. A familiar name for Reign fans on the Silver Knights roster this year is Sheldon Rempal, who spent his first two campaigns with Ontario during 2018-19 and 2019-20 and had a breakout year with the Abbotsford Canucks in his fourth AHL season, scoring 69 points (33-36=69). In goal, Jiri Patera returns for his third season with Henderson, while veteran Michael Hutchinson has joined the group and recorded a win in his first appearance on Saturday with 22 saves. Hutchinson has appeared in over 200 AHL games since 2010-11 with six different teams and most recently spent the last three seasons in the Toronto organization.

SHOOTIN’ SAMMY: Forward Samuel Fagemo has lit the lamp in back-to-back games to begin the 2022-23 AHL regular season. His performance on Sunday was particularly noticeable because in addition to the fact that he scored both of Ontario’s goals, he also led the team with six shots on net. As impressive as that total was, it doesn’t account for another attempt in the closing minutes that rang off the post, putting him inches away from tying the game for a third time. Fagemo’s three goals have him in a 6-way tie for the league lead heading into Tuesday’s game, an opportunity for him to take sole possession of the top spot with it being the only contest in the league tonight. A year ago Fagemo ranked second on the Reign and 17th in the AHL with 27 goals.

AIR JORDAN: Defenseman Jordan Spence opened the regular season with his third career three-assist performance Friday, posting two power play helpers and a third at even strength to Tobias Bjornfot in the second period. Spence returned to the AHL to begin 2022-23 after finishing his rookie professional season in the NHL with the LA Kings where he appeared in 24 regular season games and three postseason contests. The native of Australia had a breakout campaign with the Reign prior to his call-up, scoring 42 points in 46 games on four goals and 38 assists. Spence’s performance was enough to earn him All-AHL First Team honors as one of the league’s top blueliners. Through two games this year he also leads the team with a +4 rating.