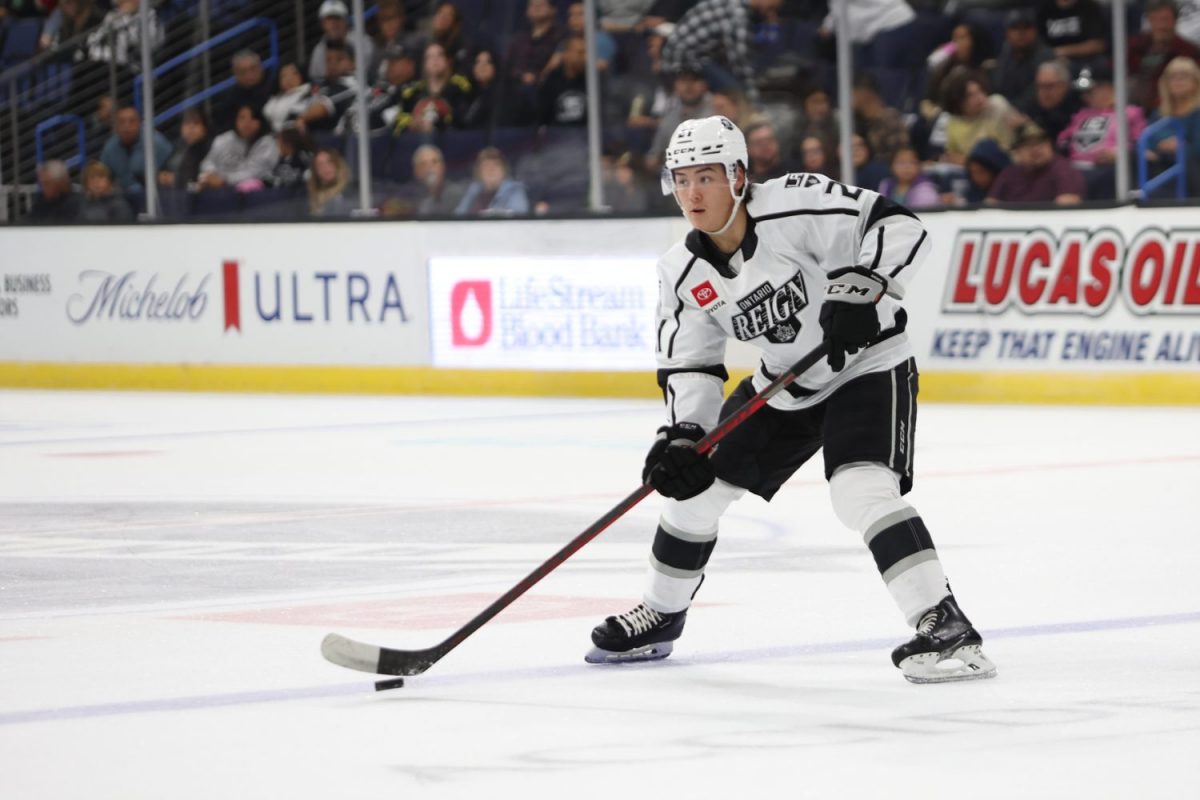 TONIGHT’S MATCHUP: The Ontario Reign face the Bakersfield Condors Sunday afternoon for the first time during the 2022-23 AHL regular season at Toyota Arena. The Reign finished with a 5-2-1-0 record in eight contests against Bakersfield a year ago, including wins in three of the four contests in Ontario. Both teams qualified for postseason play in 2022 after Ontario finished second in the Pacific Division with 91 points while the Condors secured 84 points and earned the fourth seed.

WHAT TO WATCH FOR: The Reign look to build off an excellent start to the season on the offensive end which saw them put up 46 shots in an Opening Night victory. Ontario also capitalized on special teams, scoring three times on the man-advantage. The team’s first line of Lias Andersson, TJ Tynan and Samuel Fagmeo combined for three goals and six points in the win. Bakersfield is still looking for its first win of the year after losing its opener to Abbotsford in overtime on Saturday night by a 3-2 score.

LAST TIME OUT: There was a lot to celebrate on Friday night at Toyota Arena as the Ontario Reign kicked off its 15th Anniversary season with a lopsided 8-2 win over the visiting Abbotsford Canucks. Forward TJ Tynan, who was named team captain earlier in the afternoon, led the way with four points on a goal and three assists, while goaltender Pheonix Copley stopped 29 shots to earn a win in his Reign debut. Eight different players lit the lamp for Ontario in the victory, including defender Helge Grans, who had both a goal and an assist. Defenseman Jordan Spence also had a big night, earning three assists, two of which came on the power play. The victory was the first for Reign head coach Marco Sturm in his first AHL game behind the bench.

THE CAPTAIN DELIVERS: After being officially named captain on Friday, TJ Tynan continued to lead the Reign offense, posting four points in the team’s Opening Night victory. The attacker assisted on Samuel Fagemo’s power play goal in the first, before adding a helper on Lias Andersson’s second period strike. Then six minutes later, Tynan took matters into his own hands and stole the puck away from a Canucks skater before wristing home his first tally of the year to put Ontario comfortably ahead by a 5-2 score. Finally, he added the first assist on Tobias Bjornfot’s highlight-reel goal late in the second. It was the sixth time in Tynan’s career that he earned four points in a game. The Orland Park, Ill. native ranked second in AHL league scoring with 98 points a year ago and claimed his second straight MVP award, while his 84 assists tied for the third-most in a season in AHL history.

SCOUTING THE CONDORS: The AHL affiliate of the NHL’s Edmonton Oilers, Bakersfield is aiming to continue competing at the top of the Pacific Division this season as they have during the past two campaigns. In their opening game on Saturday night, the Condors took a 2-0 lead in the first period on goals by Michael Kesselring and Dino Kambeitz, but were unable to hold the early advantage and fell to Abbotsford 3-2 in overtime. Forward Seth Griffith returns for Bakersfield this year after achieving an 80-point season with 30 goals and 50 assists a year ago. James Hamblin is also back after posting 35 points (21 goals, 14 assists) in 64 games last season. Five of the team’s six opening night blueliners played for the club last season, with the exception of Jason Demers, who has just under 700 games of NHL experience during his 15-season pro career. In goal, Calvin Pickard started the team’s opening game on Saturday while Olivier Rodrigue served as the backup. The Reign faced Pickard twice last season while he was a member of the Grand Rapids Griffins, going 2-0-0 against the Winnipeg native.

COPS THE ROBBER: Goaltender Pheonix Copley started the season off with a victory for the Reign and came as advertised by making multiple timely stops throughout the game. After allowing two goals in the opening five minutes, Copley shut the door on the Canucks for the remainder of the game while Ontario’s offense broke out for a lopsided victory. The netminder is beginning his ninth pro season and played in his 227th AHL game on Friday night. Copley has also suited up for 31 NHL contests in his career and a year ago the North Pole, Alaska native ranked ninth in the AHL with a goals-against of 2.38 in 35 outings with the Hershey Bears while earning a record of 18-2-5.

AIR JORDAN: Defenseman Jordan Spence opened the regular season with his third career three-assist performance, posting two power play helpers and an even strength dish to Tobias Bjornfot in the second period. Spence returned to the AHL to begin 2022-23 after finishing his rookie professional season in the NHL with the LA Kings where he appeared in three postseason contests. The native of Australia had a breakout campaign with the Reign prior to his call-up, scoring 42 points in 46 games on four goals and 38 assists. Spence’s performance was enough to earn him All-AHL First Team honors as one of the league’s top blueliners.

POWER PLAY STARTS HOT: After achieving record-breaking success on the power play during 2021-22 the Reign began where they left off during the first game of the 2022-23 campaign, scoring three times on the man-advantage. Samuel Fagemo found the back of the net on the team’s first power play opportunity of the year, while Lias Andersson added a strike in the second and Akil Thomas posted a dagger on the man-advantage in the third. Last season, Ontario set a new AHL league record with a 27.5% conversion rate on the power play. The previous high mark belonged to the Springfield Indians, who finished at 26.78% during an 80-game campaign in 1993-94. Ontario was at the top of the league rankings in all situations with a 28.3% mark at home and a 26.8% rate on the road.