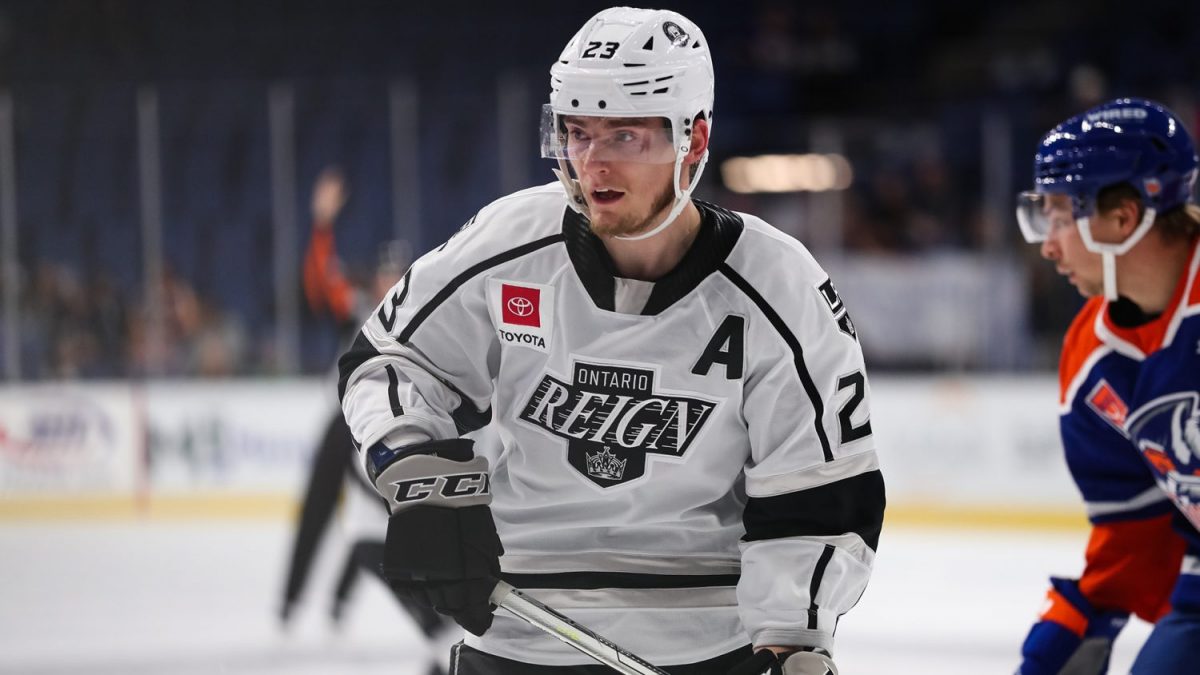 A third period goal by Samuel Dove-McFalls pushed the Bakersfield Condors (1-0-1) past the Ontario Reign (1-1-0) by a final score of 3-2 at Toyota Arena on Sunday afternoon in the first meeting of the season between the two Pacific Division rivals.

Samuel Fagemo had a big night for the Reign in a losing effort, scoring both of the team’s goals from linemates Lias Andersson and TJ Tynan. Fagemo is tied for the AHL lead in goal scoring after the league’s opening weekend with three tallies, while Tynan is first among all skaters with six points.

More from head coach Marco Sturm and Fagemo below.

The Condors took an early 1-0 lead on their first shot of the contest when defenseman Philip Kemp beat goaltender Pheonix Copley after a puck that was poke checked bounced to him in front of the net.

Ontario evened the game four minutes later at 8:38 of the first. A shot from the point by Tynan was stopped by goaltender Olivier Rodrigue, who left a rebound in the crease behind him. Fagemo got to the loose puck first and swept it into the net for his second goal in as many games to begin the season. The third member of the team’s first line, Andersson, also got a piece of the loose puck and received an assist on the play.

But Bakersfield took control of the game in the second period, outshooting the Reign 12-5 and scored the only goal of the middle frame on the power play when James Hamblin buried a cross-ice feed by Seth Griffith. The Condors held a 2-1 advantage at the end of the period.

Fagemo tied the game for the second time with his second goal of the game just 1:38 into the third on a one-timer off a pass by Andersson.

The Condors responded quickly just 90 seconds later to retake the lead on a wrist shot from Dove-McFalls that turned out to be the game-winner.

Ontario attempted to battle back in the final minutes and Fagemo just missed tying the game for a third time when his wrist shot rang off the post. Copley went to the bench in favor of an extra skater in a last-ditch effort, but the Reign were unable to beat Rodrigue a third time. The Bakersfield netminder earned the win with 20 total saves, while Copley turned aside 18 attempts in his second appearance of the season.

Hamblin’s goal was the lone power play strike of the night in a game that did not see many man-advantage chances. Bakersfield was 1-for-2, while the Reign came up empty on two power play opportunities in the first.

Ontario continues its season-opening homestand on Tuesday when they battle the Henderson Silver Knights at 7 p.m. PST inside Toyota Arena.

Marco Sturm
On the biggest differences between Friday’s win and tonight’s loss
I think, first of all, the opponent was a little different. They just a played a totally different game. Structurally they weren’t pretty, but they got the job done. They know they’re roles. They knew what they wanted to do, hey frustrated us a little bit five-on-five, and they wanted to score on the powerplay, and that’s exactly what they did.

On Samuel Fagemo’s two-goal performance
He was pretty good. I thought him and Tynan had a really good game. With his shot, he’s so dangerous at five-on-five and five-on-four. Now, we have to find a way to get many more shots like that. He was good today, and he needs to be. Our best players have to be the best players every night, and today we didn’t have enough.

On adapting to in-game challenges
We’re not going to win every game. There will be games when we’re going to be behind. Like today, we tied it up and then I thought we felt really good and the bench was alive. It was a little quiet before we had good momentum. Then, all of a sudden, we got the goal against. A bad bounce, maybe bad luck, but it doesn’t matter. That’s something we just have to get better at and we have to learn from it and use it for the next game.

On another strong performance from Pheonix Copley
I thought he was really solid. There’s still maybe one or two goals he might want back, but you can tell he’s a veteran goalie. We’re really lucky and we’re very happy to have him in there because he will give us a chance every night to win the hockey game.