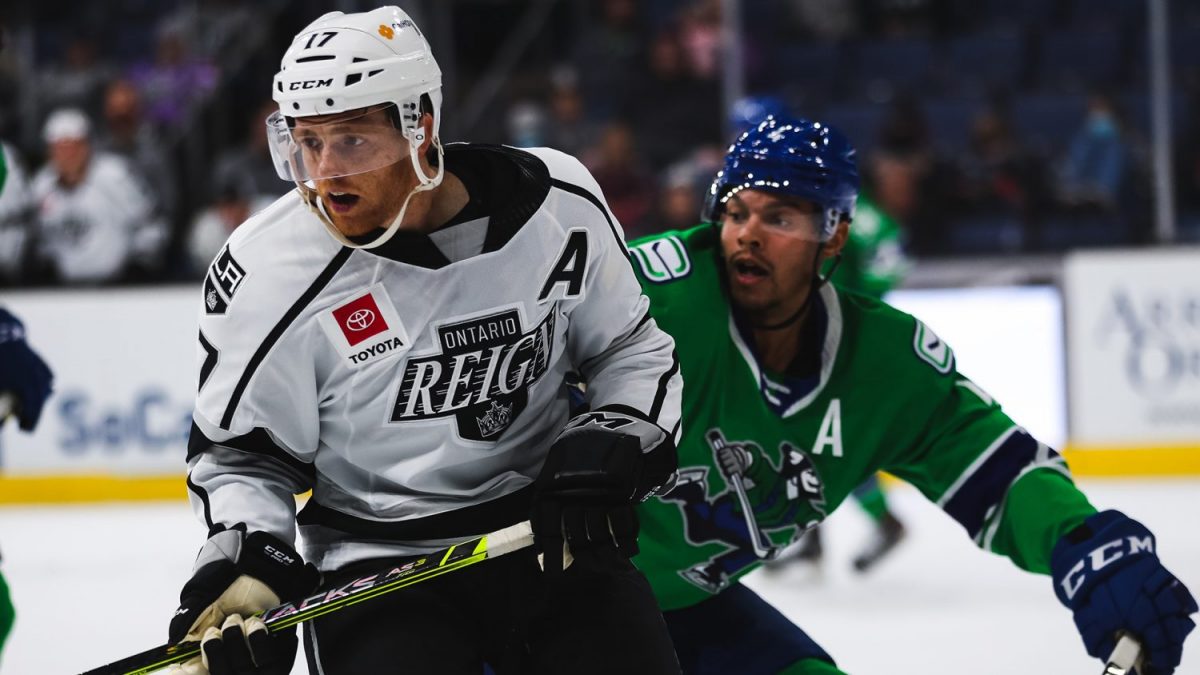 TONIGHT’S MATCHUP: The Ontario Reign open the 2022-23 AHL regular season at home Friday evening against the Abbotsford Canucks. Ontario finished with a 3-3-0-2 record in eight contests with Abbotsford during the Canucks’ inaugural season a year ago, winning three of the first four matchups in October before coming up short in the final four contests. Both teams qualified for postseason play in 2022 after Ontario finished second in the Pacific Division with 91 points while Abbotsford secured 84 points and earned the fifth seed.

WHAT TO WATCH FOR: Under new head coach Marco Sturm, the Reign are once again expected to compete with the best in the Pacific Division this season. The team’s opening night roster is filled with returning stars, including reigning AHL MVP TJ Tynan, 27-goal scorer Samuel Fagemo and Tyler Madden, who reached the 30-point plateau, up front. On the back end, Jordan Spence begins the year in Ontario after a breakout rookie season that ended with a lengthy NHL call-up and First Team All-AHL honors. He’s joined by Tobias Bjornfot, who has played in over 100 NHL games during the past two seasons, and the steady presence of both Jacob Moverare and Cameron Gaunce. The Reign also boast some exciting newcomers, with veterans Alan Quine and Nate Thompson among the forward group, both of whom have extensive NHL experience.

LAST TIME OUT: In their only game of the 2022 preseason, one that was filled with special teams, the Reign fell short to the San Diego Gulls by a final score of 6-2 Saturday night at Pechanga Arena. Rookie forwards Martin Chromiak and Taylor Ward scored the tallies for Ontario, while goaltender Matt Villalta started the game and made 18 saves on 19 shots in just over 31 minutes of action. The two teams combined for a total of 76 penalty minutes in the contest, with San Diego committing 15 infractions for 41 minutes and Ontario taking 12 penalties which totaled 35 minutes. The Gulls went 2-for-7 on the man-advantage, while Ontario ended at 1-for-10.

MV-TJ RETURNS: Forward TJ Tynan, who ranked second in AHL league scoring with 98 points and claimed his second straight MVP award, returns to the organization for 2022-23 with a new two-year contract in tow. Tynan was the first MVP winner in Reign history and just the fifth player in league history to win back-to-back MVP awards. His 84 assists tied for the third-most in a season in AHL history, and he remarkably went consecutive games without an assist just twice during the regular season. His production also included a 13-game assist streak from Mar. 22 to Apr. 22 that was the longest in the AHL since 2012. The Orland Park, Ill. native’s points per game average of 1.58 also led the league, as did his power play assist total (46) and power play point total (49).

SCOUTING THE CANUCKS: Abbotsford begins its second season as Vancouver’s AHL affiliate with four straight games away from home. They’ll open up the Abbotsford Centre on the final weekend of October when they host San Diego for a pair of contests. The Canucks are expected to have multiple forwards from a year ago return to the lineup, including John Stevens (43 points), Will Lockwood (25 points), Danila Klimovich and Chase Wouters (18 points each). On defense, Noah Juulsen, Jett Woo and Alex Kannok Leipert each logged more than 40 AHL games for the club last season, while former Reign blueliner Christian Wolanin will join the team’s back end. In goal, Rancho Cucamonga, Calif. native Collin Delia is expected to begin the season on the roster after seeing action in eight NHL games with the Chicago Blackhawks last year along with returning netminders Michael DiPietro and Arturs Silovs.

GOALTENDING GREATS: To begin 2022-23, Ontario boasts two proven goaltenders at the AHL level with one returner and one newcomer. A year ago, Matt Villalta posted career-highs in goals-against average (2.98), save percentage (0.903) and wins (28) while appearing in 46 games during his third pro season. The 2017 third-round selection ranked third in the league in saves and fourth in minutes played. Joining him on the roster is Pheonix Copley, who comes to the organization with eight seasons of pro hockey under his belt that includes 226 AHL games and 31 NHL contests. A year ago, Copley ranked ninth in the AHL with a goals-against of 2.38 in 35 outings with the Hershey Bears while earning a record of 18-2-5.

STURM TO SET THE STANDARD: Marco Sturm was named the new head coach of the Reign in June, becoming the sixth bench boss of the LA Kings’ AHL affiliate in Manchester or Ontario. Sturm joins the Reign after spending his last four seasons (2018-22) as an assistant coach with the Kings. In 2021-22, Sturm helped the Kings earn their first playoff berth since 2017-18 with a third-place finish in the Pacific Division standings. Before joining the Kings coaching staff, the Dingolfing, Germany native served as head coach and general manager for the German National Team from 2015-18. During that span, Sturm led his native Germany to a silver-medal finish at the 2018 Winter Olympic Games. While he’ll be behind the bench in Ontario for the first time on Friday, his assistants are all familiar with the organization. Chris Hajt returns for his sixth season as an assistant coach with the Reign, while Brad Schuler, who has served as the team’s Video Coach for the past three seasons, was promoted to the role of assistant coach and goaltending coach Matt Millar is also back for his third season.

POWERFUL EXPECTATIONS: The Reign will look to continue the record-breaking success they achieved on the power play last season when they set the AHL’s record with a 27.5% conversion rate on the man-advantage. The league’s previous high mark belonged to the Springfield Indians, who finished at 26.78% during an 80-game campaign in 1993-94. Ontario was at the top of the league rankings in all situations with a 28.3% mark at home and a 26.8% rate on the road. In addition to TJ Tynan, who led the league with 49 power play points, other returning standouts from last season’s man-advantage include Jordan Spence (2-24=26), Samuel Fagemo (9-3=12) and Tyler Madden (3-4=7).