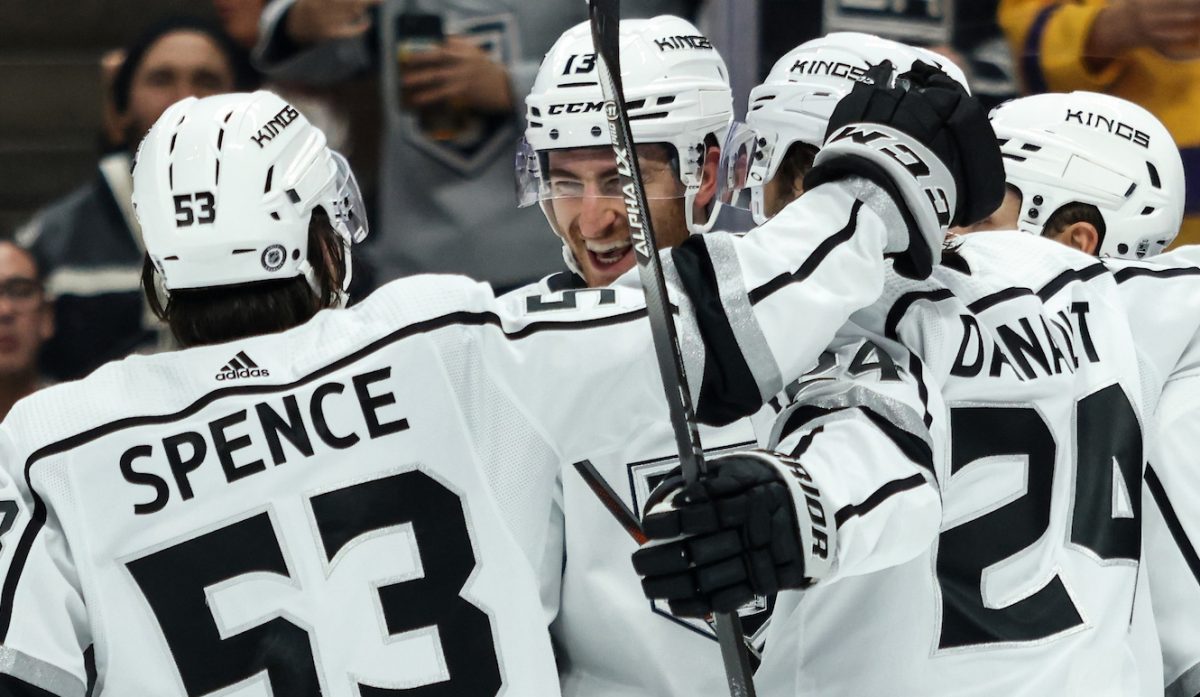 It’s certainly been an impressive start to training camp for Gabe Vilardi.

It’s all started with his enthusiasm for the game and his excitement on and off the ice. That has gone hand-in-hand with the success he’s had thus far, sure, but it’s also gone beyond that and it’s a great sign for the 23-year-old forward.

“It looks like he’s having a lot of fun and I think that’s a huge part of it,” Kings Head Coach Todd McLellan said. “Give him credit for being enthusiastic and being excited and his teammates love playing with him right now that’s a real good sign.”

His new linemates have noticed as well.

While Vilardi may not be playing on a line with Trevor Moore and Phillip Danault for the long haul, he’s there right now and both players have expressed excitement about…….well, Vilardi’s excitement. Viktor Arvidsson is the usual third member of that line, but his offseason back surgery created a void during preseason action. Vilardi has stepped into that role effectively, playing on the right side of that line during yesterday’s game in Anaheim.

Both of his linemates last night have noticed a ton of energy and enthusiasm coming from Vilardi, something that’s gotten both players excited about the temporary arrangement.

“When Gabe is having fun, it’s infectious and I think he plays his best hockey when he’s having fun,” Moore said. “I think when he’s stressed, or he’s not feeling great about his game, it weighs on him. It feels like he’s in a great headspace [right now] and we need that going forward.”

“You can tell his vibes are so positive and he wants to be a game changer,” he added. “It’s definitely a big difference I’ve seen so far this year and we need him. We need him to be like that and the more players we have like that, the better we’ll be.”

The offensive ability Vilardi possesses has always been noticeable to anyone who’s watched him play.

With a combination of size and hands that is rare, even around the NHL, Vilardi has one of the most unique and high-level skillsets in the organization. He can see and execute plays offensively that not everyone can, while using his big frame to work well below the goal line and his shot, which is perhaps underutilized, is heavy and accurate from the tops of the circles in.

“Gabe has always been a big, strong kid, you can see that when he wins puck battles,” Moore said. “He’s working really hard right now and I think it’s showing. The skill has always been there, it’s just a matter of him getting that confidence and doing those little things.”

It’s the little things that Vilardi has put perhaps the biggest emphasis on entering training camp this fall.

When he was assigned to the AHL last November, Vilardi was sent down with the direction to transition from player center to playing on the wing, with an emphasis on evolving his 200-foot game in the process.

Offensively, that switch didn’t really create any differences and Vilardi’s 38 points from 39 games played with the Ontario Reign showed that. It’s at the other end of the ice, the defensive side of the puck, where switching positions presented the most changes.

Playing center and playing wing defensively means a different set of responsibilities. The wing commands high-level wall play and an ability to make quick plays under pressure from pinching defensemen or forechecking offensive players, whereas center is more about support and defensive positioning. Vilardi put a major emphasis on the smaller details of the defensive zone, as instructed by coaches and management.

“I’ve got to continue to work on [the defensive zone], you can always get better with your wall play and that’s important for me when playing as a winger, taking care of my own zone first,” Vilardi said. “I’ve been on the wing for around a year now and I’m still adjusting. I’m going to continue to work and take it day-by-day.”

The coaching staff has taken note of that work Vilardi has put in to date.

“When we talk about Gabe, we talk about him as a whole player,” McLellan said. “Obviously he scored two goals [last night], but he did a lot of good things away from the puck, on the boards, he was physical, defending. Right now, he should feel really good about his game and it shows just the way he carries himself when he walks around the locker room. Guys are excited about playing with him, a lot of real positives right now for him.”

Vilardi has also earned an opportunity to skate with the top power play unit early in camp, playing a new role there as well. He’s done his work in and around the net, playing in a position that allows him to use his size to draw players in and his hands in tight spaces to make plays that free up other players.

McLellan talked about Vilardi buying into the role and taking ownership of it, something Vilardi himself has said as well.

“I’m in front of the net and I’m really just trying to create attention and try to find that that backdoor space,” Vilardi said of his assignment on the power play. “I’m in more of a recover the puck mode, just trying to create space for other guys by being almost like a distraction and bringing guys in, you kind of saw that on Juice’s goal [on Sunday]. We’ve been working on that and I actually really liked it, it looks good.”

With progress made on the defensive side of the puck and a renewed confidence in his offensive game, both at 5-on-5 and on the power play, Vilardi has been noticeable each time he’s taken part in a preseason contest. As McLellan said, it’s been about more than just the goals he’s scored.

With a package of abilities that sets him apart, Vilardi has proven to be an effective fit in the top six with a spot available in the interim.

“He’s really good with the puck, he’s good at stealing the puck and he’s going well right now,” Danault added. “I really like his confidence and his strong play, the way he’s cutting to the net, there’s a lot on the offensive side right now.”

Even the man he’s currently filling in for has taken notice.

While Arvidsson and Vilardi are quite different as players – Arvidsson does more “buzzing” around in the offensive zone, while Vilardi tries to draw players to him before making a small play – as Moore phrased it, they’re both gifted offensive players who can thrive in the role, despite their differences, per Danault.

When asked about younger players who he’s seen take a stride, Arvidsson was quick to single out Vilardi.

“I feel like Gabe has taken a step with his skating and with his control of the puck,” Arvidsson said. “Especially offensively, he’s dangerous when he has the puck and he’s creative. He’s made steps in the last year and hopefully he continues to grow.”

While the place on his current line may be temporary, as Arvidsson won’t simply lose his spot due to an injury, it’s a huge chance for Vilardi to showcase himself nonetheless. With two preseason games yet to come, Arvidsson’s status entering opening night is unkwown. He has progressed nicely and has not been ruled out, but he’s also not confirmed to be ready to go so quickly. Should the latter be true, Vilardi has done a good job of positioning himself for the early crack at that spot in the lineup.

Difficult decisions are good ones for the Kings organization and a strong start to the season for Vilardi in that role, for however long it may be, forces the Kings to make decisions in other areas and that’s a good thing for the team. We see a similar decision looming on the blueline and having that decision among the forwards as well is a sign of progress for the Kings all around. 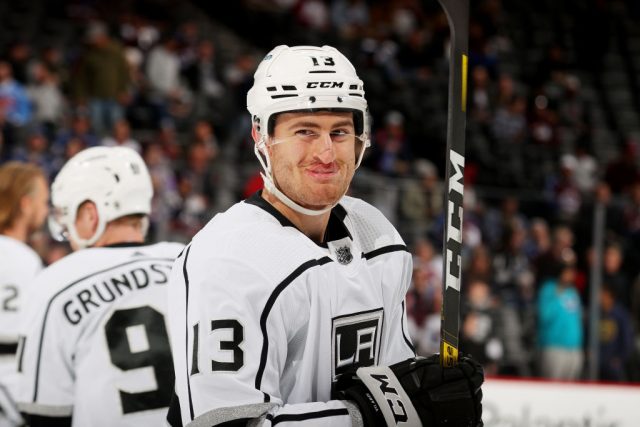