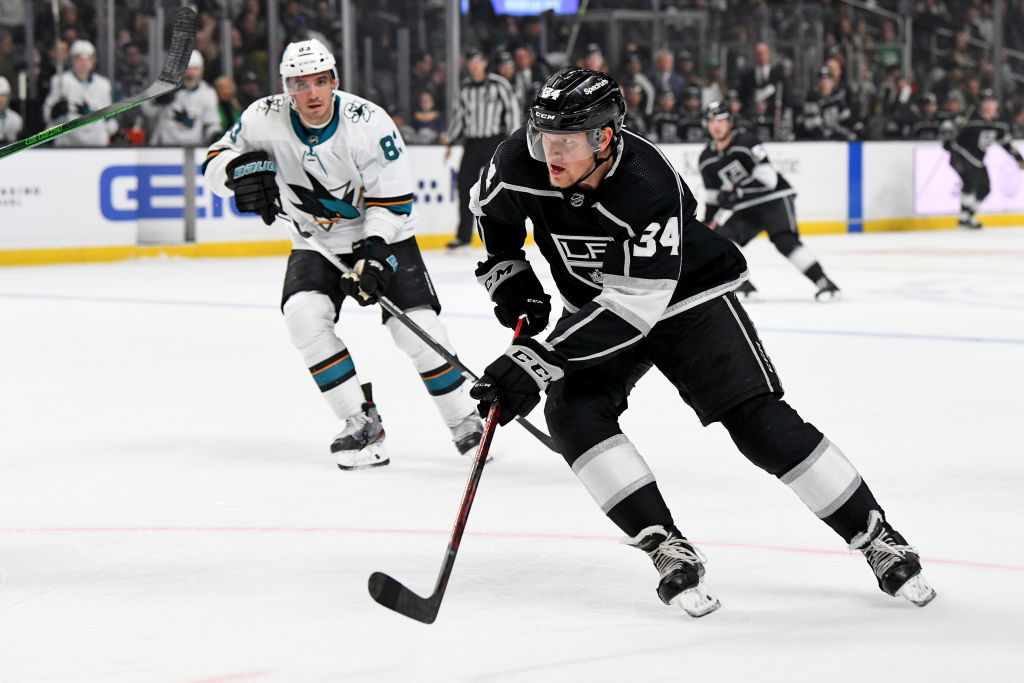 Third Period
20:00 – Third period is a go, with the Kings on the man advantage to begin the frame.
18:35 – Kings will get their third opportunity on the power play, Hertl sits for high sticking.
17:33 – LAK Goal – It’s a power-play goal! Byfield feeds down low to Vilardi, who hits Grundstrom in front for the goal. Top shelf on the finish for 91, 2-1 game.
14:00 – Fellas look a bit better here in the third. Puck movement has been crisper, as has the in-zone offensive play.
10:57 – Third delay of the game for a dislodged pane of glass. Preseason here in the building as well and the Reign had new glass installed in the offseason. We’ll be back soon!
8:05 – Great wheels from Trevor Moore, who sped down the left wing, turned his defenseman and fired on net from a relatively tight angle, Dell making a shoulder save.
3:24 – The drama! Kings will get a power-play look with 3:24 left here in regulation, trailing 2-1.
1:41 – Villalta to the bench for the extra attacker.
1:27 – SJ Goal – Empty netter, full length of the ice.

Second Period
20:00 – Back at it for the second!
16:05 – Helenius sits for cross checking, as he clears the crease in front of Villalta. Sharks to their second power play of the evening.
14:05 – Good kill from the Kings. Moore and Danault led a 2-on-1 rush, but the puck bobbled on Moore’s stick and his shot off the regrop went wide.
11:00 – Vilardi now skating with Moore and Danault on the second line. Kings have said from the beginning that multiple players would be tried there, and both 13 and 68 have taken shifts there this evening.
9:33 – Couple of odd-man scrambles for San Jose before a media timeout. Hertl/Meier on the ice have moved the puck well, but neither situation led to a true scoring chance. Kings have been a bit disjointed, though to be expected in the preseason.
9:14 – Doty is given five minutes and a game misconduct for interference. Kings will head to a five-minute penalty kill midway through the second.
7:12 – San Jose extends its lead to two with its second power-play goal of the evening. Evgeny Svechnikov is alone in front and beats Villalta on the stick side.
4:14 – Kings complete the penalty kill with just one goal alowed. Couple of good stops by Villalta, couple of rushes the other way shorthanded as Danault and Byfield showed good burst out of the zone. Kings will look to regroup for the final 24 minutes here, hopefully at 5-on-5.
0:55 – Fagemo had a great look off the rush, but found the glass from the slot. Now Grundstrom draws a penalty late in the second as he drives the net with speed. Kings to a late PP, 54.4 on the clock.
0:00 – Sharks lead 2-0 at the break. Kings will have just over a minute on the man advantage as we begin the third.

First Period
20:00 – We are underway in Ontario!
15:36 – Great look between Byfield and Kaliyev in tight. The former worked the puck with a good touch pass to Kaliyev just outside the crease, with Dell making the pad save on the best opportunity of the game’s first five minutes.
14:15 – San Jose heads to the game’s first power play, as Samuel Helenius sits for elbowing. Sharks have a few regulars on this unit, including Hertl and Meier.
14:06 – SJ Goal – Early on the PP, the Sharks convert. A scramble in front sends the puck to Bordeleau at the back post, where he slots home the game’s first goal.
13:03 – Kings will get their turn on the power play as Raska sits for the Sharks. Doughty – Kaliyev – Danault – Moore – Iafallo compose the top unit.
11:03 – Not a ton doing for either unit. Second unit tonight has Clarke with Vilardi, Fagemo, Grundstrom and Byfield.
6:16 – Great shift in between line changes with Byfield centering Grundstrom and Vilardi. Grundstrom’s wraparound went straight through the crease, while Vilardi had a shot from a sharp angle that was denied.
5:07 – Jacob Doty just hit someone so hard it sent a pane of glass through the stanchions and into the crowd. Due to the delay the teams will head to the locker room and they’ll add on the time at the start of the second.
0:00 – Sharks 1, Kings 0 at the end of 20 minutes of play. Teams will quickly regroup and take a facecoff at center ice to begin the second.