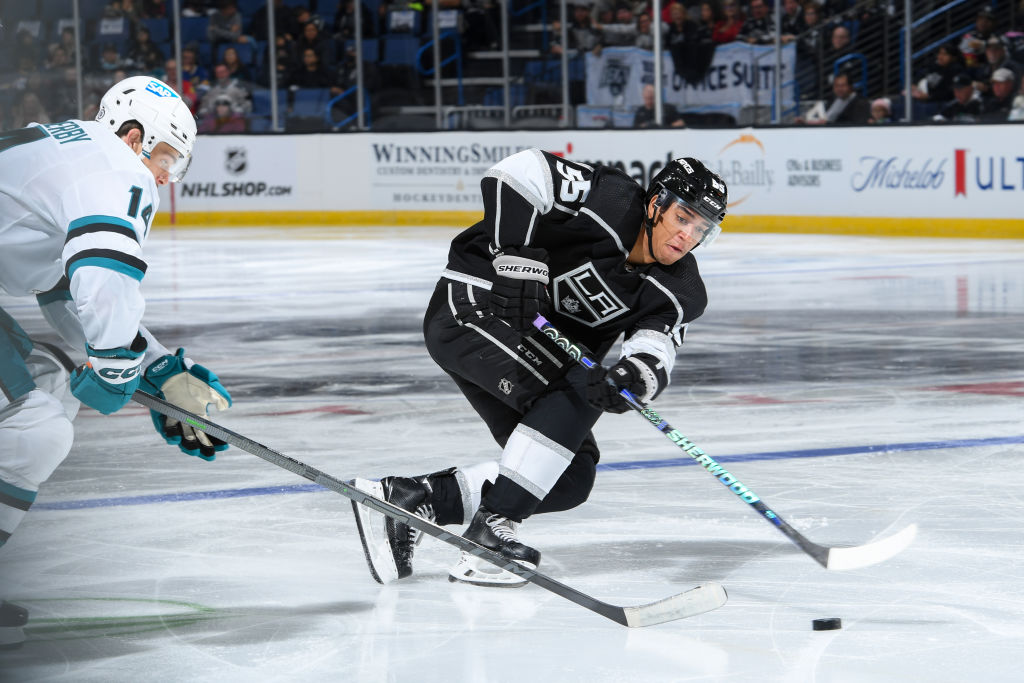 The LA Kings suffered their first regulation defeat of the preseason, by a 3-1 margin on Wednesday evening at Toyota Arena in Ontario.

Carl Grundstrom scored the lone goal for the Kings in the defeat, while Matt Villalta went the distance in goal in his first-ever preseason start, making 14 saves on 16 shots.

San Jose jumped out to an early lead as the Sharks converted on the game’s first power play. After a scramble in front of the Kings net, the puck fell to San Jose forward Thomas Bordeleau at the back post, where he slotted home the game-opening goal past Kings netminder Matt Villalta. The first period ended prematurely, as a dislodged pane of glass sent the teams to the locker room with 5:07 on the clock, which was played at the beginning of the second period.

The Sharks scored the lone goal of the second period as well, as they capitalized on a major penalty assessed to Jacob Doty. Forward Evgeny Svechnikov found himself uncovered in front of Villalta, deked to the backhand and buried for the goal, putting the visitors ahead 2-0 in the process.

The Kings answered early in the third period, however, with a power-play goal of their own. Quinton Byfield fed Gabe Vilardi down low, below the goal line, before Vilardi fed Grundstrom in the low slot, where the Swede finished top shelf for his second goal of the preseason.

San Jose iced the game late with an empty-net goal inside the final two minutes, bringing us to the final score of 3-1.

Drew Doughty
On an ideal number of preseason games for him to get into
Total, I’ll probably play three or four, so a couple more after this one. I could already play regular-season games.

On the difficulties of finding a flow in tonight’s game
It definitely took a little bit of the competitive edge out of the game and yeah, definitely the flow, you’re sitting down on the bench and you lose your legs. You saw guys start going out, twirling around, but you’re still not skating, you’re just twirling around. It’s not something you want to happen as a player.

On his impressions early in camp of Brandt Clarke
I think he’s a great player, he sees the ice very well, he makes very good plays, I can’t say enough about his offensive ability. He can learn a little bit on the other side of the puck, but who couldn’t when you come in as an offensive defenseman. I went through the same stuff, I had to learn how to play defense and we’ve got a lot of good guys on our team who can help teach him. I don’t want to say he’s NHL ready, but he’s basically NHL ready.

Matthew Villalta
On making his first-ever preseason start tonight and his takeaways from tonight
Yeah, that was the first one ever for me so very exciting. Bill let me know yesterday during practice that I’d be starting tonight, so obviously a very exciting opportunity to wear the Kings jersey down here in Ontario in front of all of our fans, it was very special. I just wanted to go in there and do the best job I could. As the game went on, it felt better and better and I feel like I adjusted to the pace and got my game speed back, which I wanted to do earlier off the scrimmages we had during camp. I think, all in all, we would have liked to get the win, especially in front of our fans here, but sometimes that’s the way it goes, it’s hockey. Other than that I thought it was a good day.

On a start in this building being more special, having played here in the AHL
100%. We had a really good crowd tonight and I definitely heard them. Like I said yesterday, anytime you get to play here in the Inland Empire, it’s a treat to play in front of our fans and you want to go out there and try and give them the best show you can. It was very exciting and I think [the fans here] have a lot to be excited about this year.

On the biggest adjustments as he gets back into game action
I think the biggest thing is just game intensity, especially for not playing all summer. Going into camp you try to ramp that up, maybe a few weeks before camp and obviously it takes a few scrimmages and practices to really get it back and feel comfortable. It’s a fun challenge definitely. When you get up here in the NHL preseason, there are a lot of skilled players, they’re elite, they make plays happen real quick, tape to tape passes and shooters are pretty accurate. It was a real good challenge and a lot of fun.

On the importance of playing in Ontario, and some of tonight’s challenges
I can’t remember three panes of glass in one game, but it’s good for us to come out here. We have good, loyal fans in this part of the country and they support our minor league team very well. Yeah, it wasn’t the best night in terms of ice conditions, or obviously the glass, the momentum of the game and the ability to evaluate it, but it still meant something for us to come here. It’s important that we did that.

On Brandt Clarke featuring in all three games so far in preseason
Just keep on playing him, he’s getting tested every night. Different elements, different factors, different teams. He played in Vegas the other night in a sold out building, coming here and trying to figure out all of the momentum stuff in a game, fatigue setting in a bit for him, so he’s getting tested. He’s earned a very valuable off day tomorrow and he’ll pick back up with the rest of the group tomorrow.

On Drew Doughty’s return to action
It was nice to see number eight back out there. One, it’s great to see him back out there. He’s got enthusiasm, he’s excited to play so he was trying to find his game. It’s been a while since he’s played and that was tough night to do it. Even for us, we can’t really evaluate real well. We’ll look at where players were going, but the ice conditions were terrible and the ability to connect passes and stuff wasn’t very good and that’s Drew’s game. He got a sweat and he got to play around players get physical, which was great.

On both Fagemo and Vilardi getting opportunities on the second line tonight
It’s huge for both of them. We tried to split the night, knowing that Moore and Danault were playing, so we tried to split the night with Sammy Fagemo and Gabe. Was it fair to them, I don’t know, it’s a tough evaluator, I wish it was perfect conditions. They both played well.

Notes –
– Carl Grundstrom scored the lone goal tonight for the Kings, giving him two goals from his first two games of the 2022 preseason.
– Grundstrom and forward Trevor Moore led the Kings with four shots on goal apiece.
– Gabe Vilardi and Quinton Byfield each collected an assist on Grundstrom’s goal, a power-play goal, the first point of the preseason for both players.
– Matt Villalta made his first career preseason start and went the distance, the first time in the preseason the Kings have not changed goaltenders during the game.

The Kings have a scheduled off day tomorrow and will resume practice on Friday morning at 11 AM at Toyota Sports Performance Center.