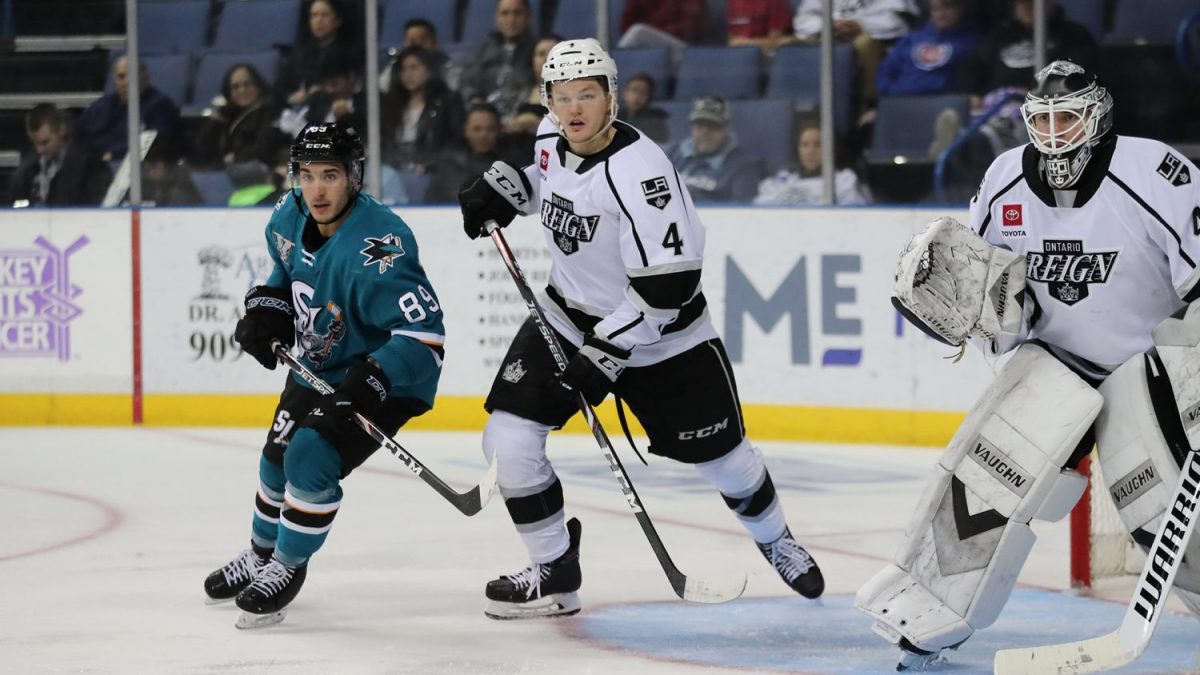 With two overtime preseason games behind them, the LA Kings now turn their sights to another matchup with the San Jose Sharks on Wednesday evening in Ontario at Toyota Arena, the home of the team’s AHL affiliate, the Ontario Reign. The inaugural ‘Empire Classic’ will be an opportunity for hockey fans in the Inland Empire to take in an NHL game.

In recent years, many Kings players have come through Ontario along the way in their development process with fond memories of playing in front of the dedicated fanbase in the region.

The Reign have been one of the AHL’s most successful teams on the business side, leading the way with one of the highest season ticket member bases in the league and a per game average attendance that ranked in the top five among league markets during both the 2018-19 and 2019-20 seasons.

While we don’t know exactly who will be in uniform on Wednesday night, there will certainly be several former Reign standouts in the lineup for LA as the team continues to evaluate its roster before the 2022-23 campaign kicks off two weeks from tonight.

Defenseman Jordan Spence, who played his first NHL preseason game of the year on Monday night in Vegas, is one of the more recent players who found success in Ontario. Spence was named to the AHL’s First All-Star Team as well as the league’s All-Rookie Team at the conclusion of the 2021-22 season after posting 42 points in 46 games on four goals and 38 assists along with a +18 rating.

“I pretty much played there the whole season last year so it’s going to be pretty comfortable playing there if I’m in the lineup,” Spence said. “There’ll be a good amount of fans that will be watching us which will be really nice so I’m just looking forward to it if I play tomorrow.”

Spence was up with the Kings down the stretch, helping the team to secure a spot in the Stanley Cup Playoffs. But before he was recalled, he was in the lineup with the Reign for many of the team’s special promotional nights.

“The specialty jersey nights and the Teddy Bear Toss, those are pretty special games,” Spence said. “There’s a good amount of fans there as well supporting us and cheering us on so I think overall, just playing there with the atmosphere that we have and the rink that we have, it was really nice. We had a great team last year and I think this year it’s going to be good again. Last year it was really fun for me to play with those players we had.”

One of those players Spence spent a lot of time on the ice with was TJ Tynan, who captured his second straight AHL Most Valuable Player award in his first season in Ontario. Tynan quickly became a standout, feeling right at home in the Inland Empire as he finished with 98 points on 14 goals and 84 assists. The center made his preseason debut for the Kings in Sunday’s contest at San Jose and could be featured in the lineup again on Wednesday.

“We had that mentality last year that even if we didn’t win, it was going to be really hard for an opponent to win in our building,” Tynan said. “It’ll be cool for everyone to see the fans and the rink that we get to play in for the American League. There will be a lot of NHL regulars there and they get to see how incredible a situation we have here in LA with being so close to the Kings and everyone. It’s a great setup, so it’ll be cool for everyone to witness it firsthand.”

Like Spence, defenseman Mikey Anderson also began his professional career in Ontario and could be making a return to Toyota Arena as he prepares himself for his fourth campaign in the Kings organization.

“My biggest memory is just having my first pro games there,” said Anderson, who was with the Reign for 53 games during the 2019-20 season. “Then my brother [Joey] was at the All-Star game there so that was fun to go watch him when he came over for it.”

One other player in the system who turned pro at the same time as Anderson was goaltender Matt Villalta, who joined the Reign for 22 games as a 20-year-old. Now with 86 AHL games under his belt, all of which have been with Ontario, Villalta is certainly familiar with the fans and atmosphere in the building.

“I think it’s a really exciting opportunity if I do get the nod,” Villalta said of potentially playing on Wednesday night. “It’s always a treat to go play in front of our fans in Ontario and also Kings fans who are going to make the trip. I think it’s going to be a real fun experience for the fans and us players too, especially the guys who have played for the Reign before and now get to wear that Kings jersey in the Inland Empire. Hopefully we can come out with the win for everyone.”

Always a fan of the Ontario crowd, Villalta knows what to expect, should he see the net tomorrow evening.

“Playing there now for the past few years I know the feel and the atmosphere with our fans and it’s always really good. It’s always going to be a treat. Anytime you get to throw on that Kings jersey, even if it’s for a preseason game, you wear it with pride and want to go out there and do the best job you can.”

Another member of last year’s Reign roster that mentioned the outstanding atmosphere was Frederic Allard, who joined the AHL group as a trade deadline acquisition before re-signing with the Kings for the upcoming campaign. Allard had a smaller taste of what it was like to play there but is eager to return.

“I can’t wait to go back to Ontario,” Allard said. “The people over there are nice, the rink is nice and the fans are great, so it will be a great time for sure. Their atmosphere is great, the fans are very close to you. We don’t see the fans much during the week so to go out there on the weekend, it’s pretty nice and everybody here can’t wait to go there and play a game, that’s for sure.”

Aidan Dudas has yet to play for the LA during the preseason, so potentially having his debut come in Ontario would be fitting for the forward who is entering the third year of an entry-level contract with the Kings. Dudas was another part of the successful Reign team a year ago and has played over 100 games for Ontario in his career.

“It’d be great,” Dudas said. “I think it’s awesome that we’re playing in Ontario and for the fans to see some of the Kings players as well. The fans, they always lift us up and I think we play really well in front of them. We’re always really excited to play at home.”

Samuel Fagemo, who became a fan-favorite in Ontario last season by scoring 27 goals a season ago, may also get an opportunity to wear a Kings jersey in the IE on Wednesday. Fagemo starred in last year’s Kings vs. Kings exhibition, as he scored a highlight-reel goal that impressed head coach Todd McLellan.

This year Fagemo is auditioning for a role with LA, and practiced on a line with Philip Danault and Trevor Moore on Tuesday at Toyota Sports Performance Center. McLellan confirmed that Danault will be in the lineup Wednesday night to make his preseason debut and Fagemo could potentially join him.

“If I’m playing tomorrow it’s going to be a really fun experience,” Fagmeo said. “The one thing that sticks out for me is the fans. It’s so fun to play there and it’s a really nice arena, I think that was great every night for us.”

Wednesday’s game gets underway at 7 PM and limited tickets can still be purchased here via the Reign. We’ll have a full preview coming in the AM as well as coverage throughout the day as the Kings and Sharks face-off for the second time in preseason action! 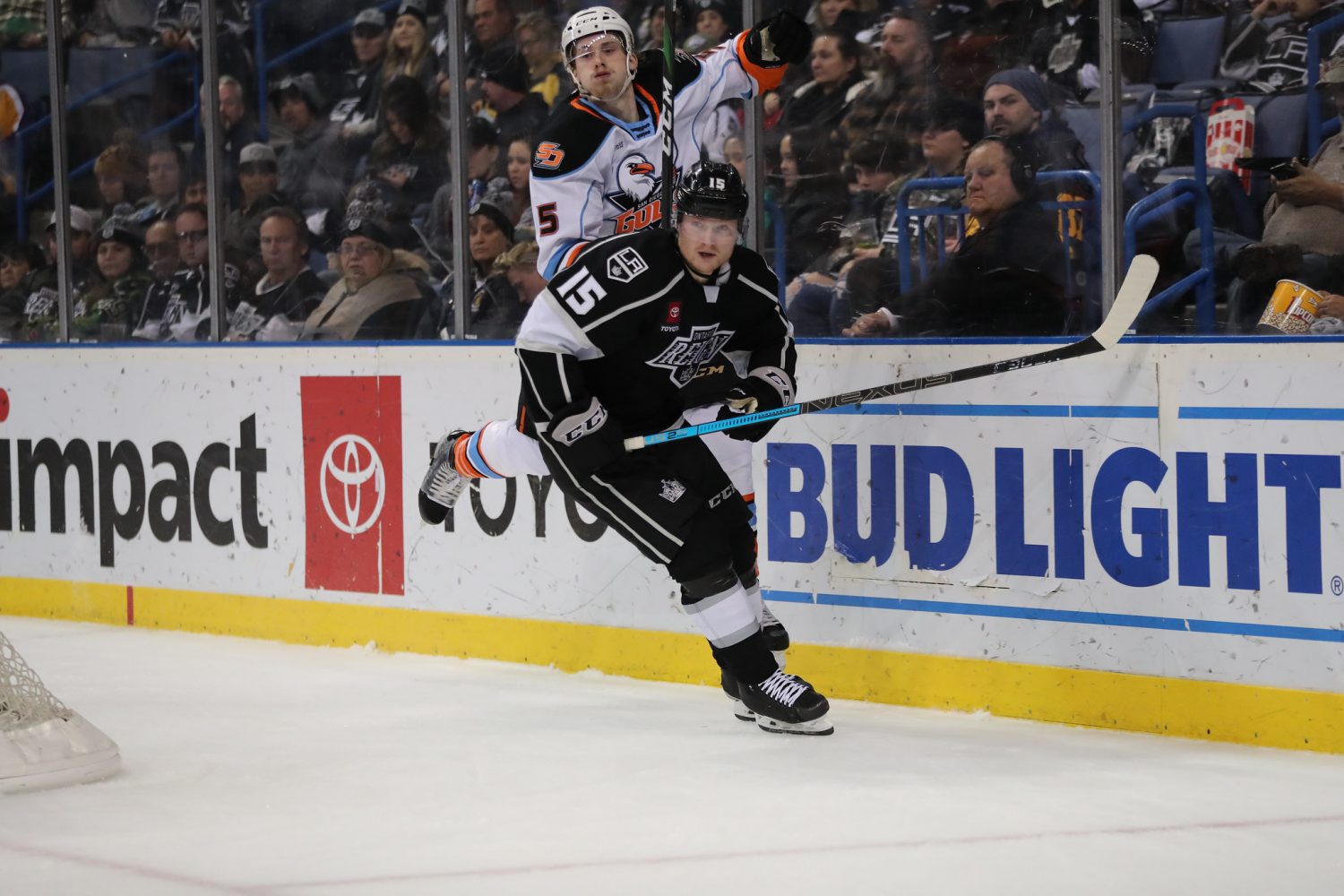 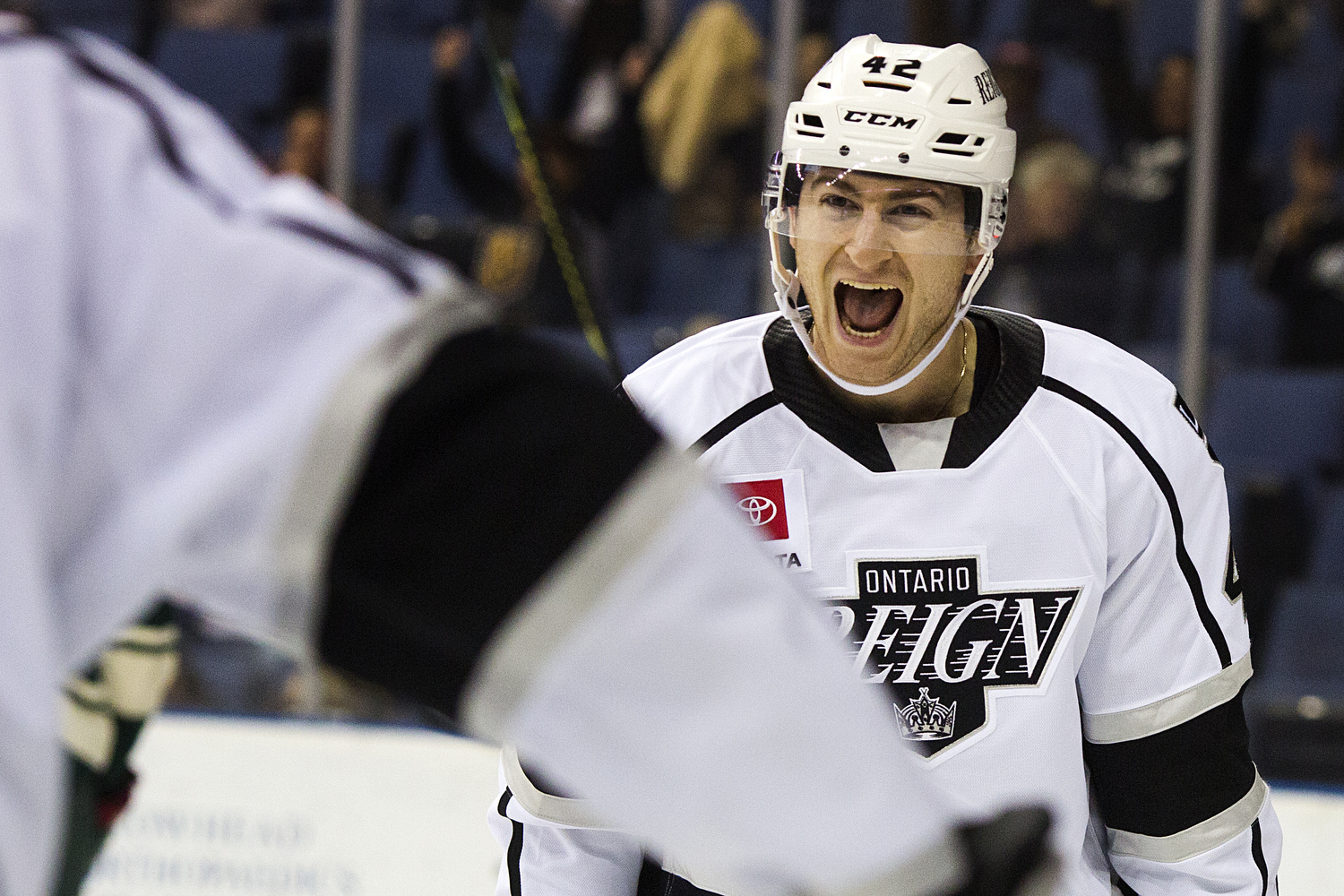 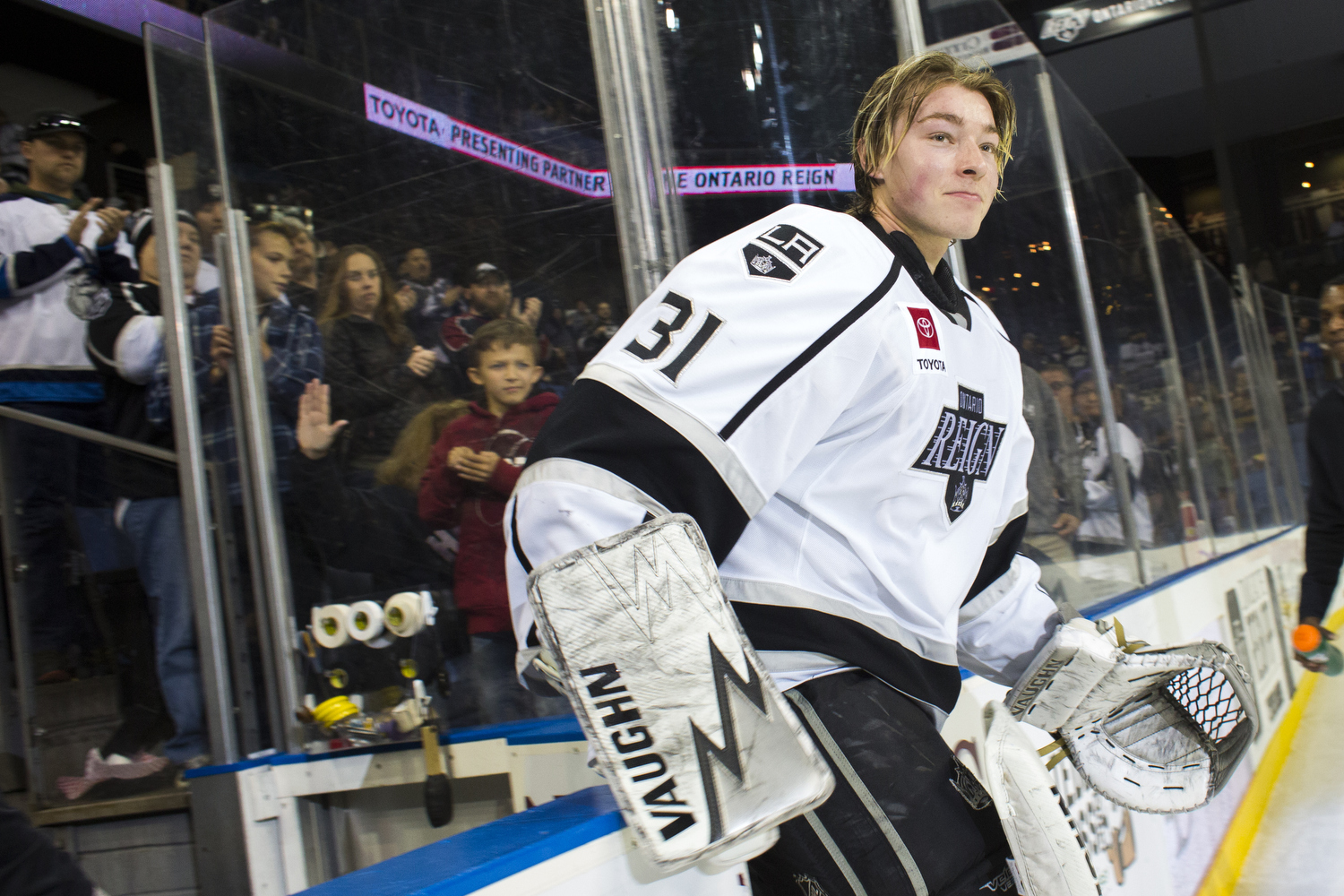 By Zach Dooley
1,317 Comments
Behind the Scenes

By Zach Dooley
251 Comments
Behind the Scenes