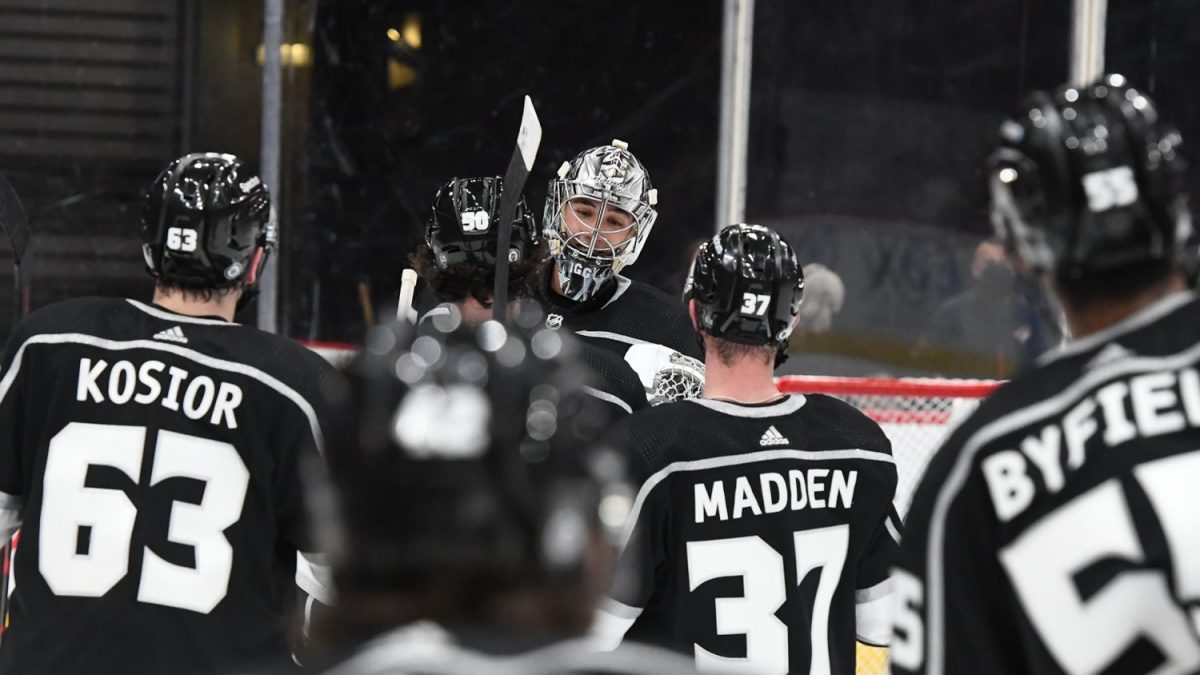 *Note – Live stream expected at 2 PM – Stream is Los Angeles and Colorado television markets only, may be blacked out in other markets

Third Period
20:00 – Back at it for the third, Kings and Avs are all square!
18:00 – Jacob Ingham comes up with another fancy glove save to shut down a chance on the doorstep. Big save to begin the period.
14:56 – The Kings earn their third power play of today’s game, as Colorado’s Brayden Schmitt goes off for holding.
14:29 – While trying to get back on defense, Brandt Clarke was called for interference. 4-on-4 play.
13:48 – Back-to-back point-blank saves for Ingham at the start of 4-on-4. He used his big frame while tracking the puck during the entire chance.
8:56 – LAK worked a shift deep in the COL zone that resulted in multiple chances for Lee-Helenius-Jamsen. Annunen was strong around the crease to keep it an even game.
8:48 – Olausson called for slashing after he knocked Byfield’s stick out of his hands. The Kings earn a late PP.
7:51 – While back in their own zone, the Kings are called for a penalty and once again it will be 4-on-4 play. Taylor Ward skated off for interference, called while he was in a battle for the puck.
6:35 – Colorado’s Ben Meyers called for hooking. Kings will have an abbreviated PP after 4-on-4 ends.
3:53 – Meyers scores on a re-direct in front of the net, deflecting the puck past Ingham to give Colorado a 3-2 lead.
1:52 – Kings pull Ingham in favor of an extra attacker, attempting to tie the game in the final moments.
0:00 – LAK had a bunch of late chances with an empty net after calling a timeout with a minute to go. One of the best was a feed from Ward to Byfield, who fanned on a one-timer. The clock ran out on the Kings, who fall 3-2. The overall shots on goal totals were even for the game, with each club putting 33 chances on net. The Kings had a 13-10 shots advantage in the third period.

Second Period
20:00 – Second period is underway from TechCU, with the Kings rookies trailing by a goal.
19:30 – The first penalty of the afternoon goes to Jamsen, who was called for holding.
17:15 – Kings get the kill! Great job by Ingham, who was officially credited with 4 saves during the advantage.
15:35 – The Avalanche go back to the power play after Stefan took down a man behind the net. LAK have been stuck in its own zone for the most part during the early going of the middle period.
13:30 – Nice PK shifts by Madden, Helenius and others lead to LA’s second straight successful penalty kill. The Kings don’t yet have a shot on goal in the period, but they can feel good about how they defended when down a man.
11:32 – And now the Kings get a power play chance of their own! Colorado’s Michael Diotte heads off for slashing.
9:44 – LAK Goal, Ward. It didn’t take long for a stacked PP unit with Byfield, Clarke, Madden and Ward to click. They won a faceoff and went to work, eventually tying the game. Ward’s shot came off a feed by Clarke, who gets his second assist of the game.
8:54 – The Kings go right back to the power play as Colorado’s Gabe Klassen is called for interference near the LA net.
5:26 – Some good zone time for LAK, but their second man-advantage isn’t as successful as the first. Shots in the period are now even at 7-7.
1:03 – Another penalty kill completed for the Kings, highlighted by more saves from Jacob Ingham. The third-year pro has had an excellent second period and is looking confident.
0:00 – The Kings used three penalty kills in the period to keep Colorado off the board and have the game all tied up at 2-2 through 40 minutes. Shots are 23-20 in favor of the Avalanche at the end of the second.

First Period
20:00 – Underway in San Jose!
18:02 – The first big save of the day goes to Jacob Ingham! He stopped a Colorado chance from the right wing to keep the game scoreless early on.
15:34 – Landon Kosior puts the first shot on goal for LAK. The play was set up by Taylor Ward, who delayed for a few seconds in the offensive end before getting the puck to the circle for the chance.
14:05 – Best look of the early going for the Kings came when Byfield took the puck down the left wing to the net. He tried a deke on goaltender Justus Annunen, but couldn’t finish. After the opportunity, LAK had a few other looks at the net that were sealed off by Annunen.
10:55 – The Kings fourth line had a great shift in the offensive zone, pinning the Avs back in their own end. Shots on goal near the midway point of the period reads LAK 8, SJ 4.
8:55 –  LAK Goal, Pinelli. Great centering feed in front from Brandt Clarke that was redirected into the bottom right corner of the net. Kim Nousiainen gets credit for the second assist on the play.
5:31 – Avalanche Goal, Olausson. A turnover at the Kings offensive blue line resulted in a lengthy shift in their own zone and they were never able to recover, even after getting a few saves from Ingham.
4:56 – Avalanche Goal, Ranta. Colorado doubles up, scoring for the second time in under a minute with a shot from the top of the left circle that found its way under Ingham.
0:00 – Despite starting well, the Kings find themselves trailing after the opening period due to a pair of allowed goals that came 23 seconds apart from each other. That late burst from the Avs has Colorado leading 13-10 in shots on goal after 20 minutes.