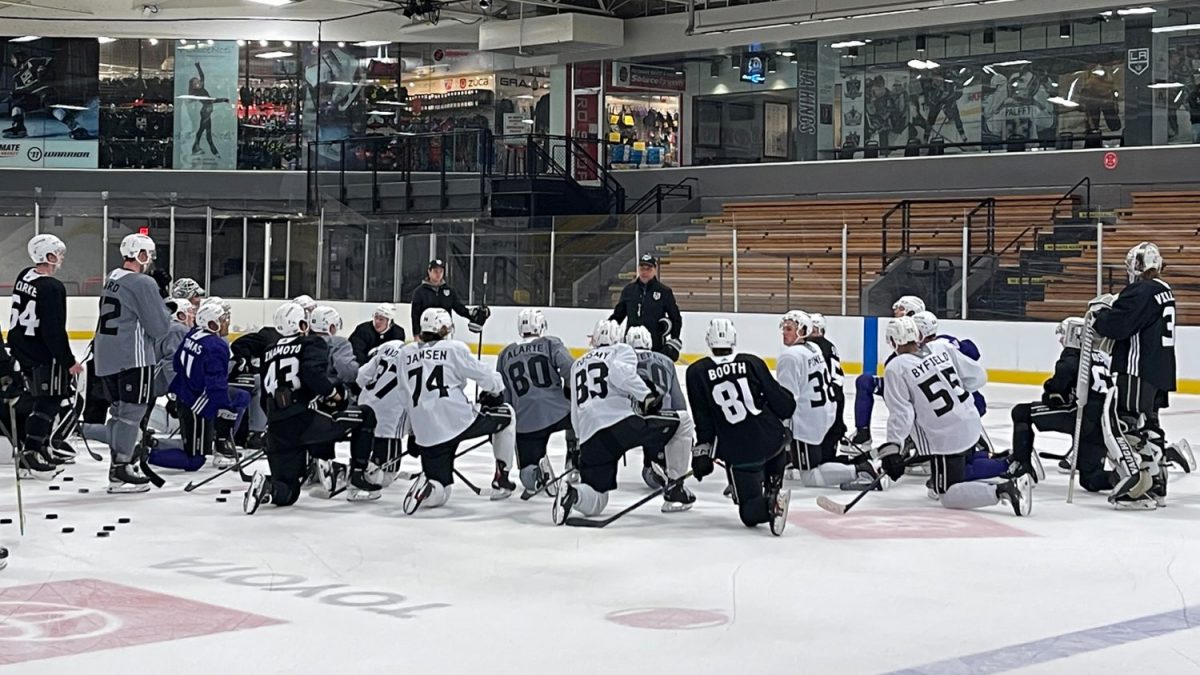 The LA Kings rookies skated on the Toyota Sports Performance Center ice this morning prior to leaving for the 2022 Rookie Faceoff in San Jose.

The Rookie Faceoff gives us a unique opportunity to see how the Kings prospects skate together as a group against opposing teams’ prospects of similar age and caliber. Today’s practice gave us a slight indication of what we might see from the Kings’ lineup this weekend in Silicon Valley.

The Kings begin play Friday at 2 p.m. against the rookies from the Colorado Avalanche, who bring a handful of returning prospects to the event. The Kings will also meet the Vegas Golden Knights on Saturday and the San Jose Sharks on Monday.

Today’s practice was the first time the Kings’ rookies had skated together as a group, so there were no standard line rushes. Lines and pairings seemed to shuffle throughout the morning, but the following groups skated together on multiple shifts during the controlled scrimmage portion of practice.

The defensive pairings seemed to change more often than the forward lines, but left and right defensemen tended to remain on their natural sides.

There were three goaltenders on the ice this morning (Matt Villalta, Jacob Ingham, and David Hrenak) but only two will play for the Kings this weekend. Villalta, who was a late addition to the Rookie Faceoff roster last year, is not on this year’s roster but will serve as a practice goalie this week. That leaves Ingham, who is beginning his third professional season, and Hrenak, who made a late-season AHL debut after his fifth NCAA season at St. Cloud State, to split the three games in San Jose.

Today’s practice ended with a quick skills competition, as Hrenak and Ingham dueled in a shootout from opposite ends of the ice. Four players (Byfield, Madden, Grans and Clarke) each took two shots, one at each net. The only player to score on both goaltenders was… you guessed it! Defenseman, Brandt Clarke.

Marksman Martin
Martin Chromiak showed off his shot with multiple goals today at TSPC. He seems to bring a little more firepower every time he walks into the building. He appeared in all three games at the 2021 Rookie Faceoff last year and led the team with four points.

Ontario Reign Head Coach Marco Sturm, who will lead the Kings rookies behind the bench this weekend, has taken note of the impact Chromiak could have this weekend and beyond, as he is expected to turn pro this season.

“He’s a really, really good player and he can put the puck in the net, that’s for sure,” Sturm said. “I’m excited that he’ll stay here with us all year long because he might be a guy in the future.”

Chromiak is coming off a spectacular final season in the OHL, where he recorded 86 points in 60 games and spent most of the season on a line with 2022 fourth overall pick Shane Wright.

Reignunion
The Kings roster for this season’s Rookie Faceoff features 13 players who appeared for AHL Ontario during the 2021-22 season. Quinton Byfield and Jordan Spence, who are included in that number, also combined for 64 NHL games last season with the LA Kings.

Not included in the 13 is the 2020 fifth-rounder Chromiak, who spent all of last season playing in the OHL with the Kingston Frontenacs. However, he did appear for a brief two-game stint with the Reign in 2021, the shortened season played behind closed doors at TSPC.

As noted above, Chromiak spent most of practice on a line with Akil Thomas, who caught fire in the AHL late last season. Quinton Byfield and Tyler Madden also spent much of today’s practice on the same line after appearing together for a stint last year in Ontario.

On the back end, Kim Nousiainen and Jordan Spence gave us a glimpse at what could be a quick and flashy D-pairing for the weekend and maybe in the future. Nousiainen, a former fourth-round selection in 2019, concluded his 2022 campaign with the Reign after appearing in 35 professional games in Finland.

Forward Alex Turcotte is not included here, as the former fifth overall draft pick did not skate this morning and will not be making the trip to San Jose this week.

“[Turcotte] will not travel but he’s doing good. I think he has a few more tests coming up here with different doctors. As of right now, he is not cleared. We want him healthy and he’s been through a lot in the past. We want to take our time and when the doctor says he’s ready to go, then he is. We just have to be a little bit patient.”

Returning Rookies
Ten players from last season’s Rookie Faceoff roster return this season. Madden, Pinelli, Chromiak, Byfield, Spence, Grans and Ingham are the returners who were drafted by the Kings. Brett Kemp, Landon Kosior, and Cameron Supryka are returning invitees. These players helped lead a Kings team to two wins in three games in Arizona, including a 4-0 thrashing of the Avalanche, who they’ll meet again to start this year’s showcase.

Brandt Clarke, the Kings’ eighth overall pick in 2021, was on last year’s roster but didn’t make the trip due to an illness. Turcotte participated last year in Arizona, but as previously mentioned, is not expected to play this weekend in San Jose despite appearing on the preliminary roster.

We’ll have another feature story ahead of the rookie event posted here on LAKI later this afternoon and our coverage will continue here throughout the week. The Kings rookies open play on Friday afternoon at 2 p.m. against the Colorado Avalanche at the brand new TechCU Arena, the new home of the AHL’s San Jose Barracuda.