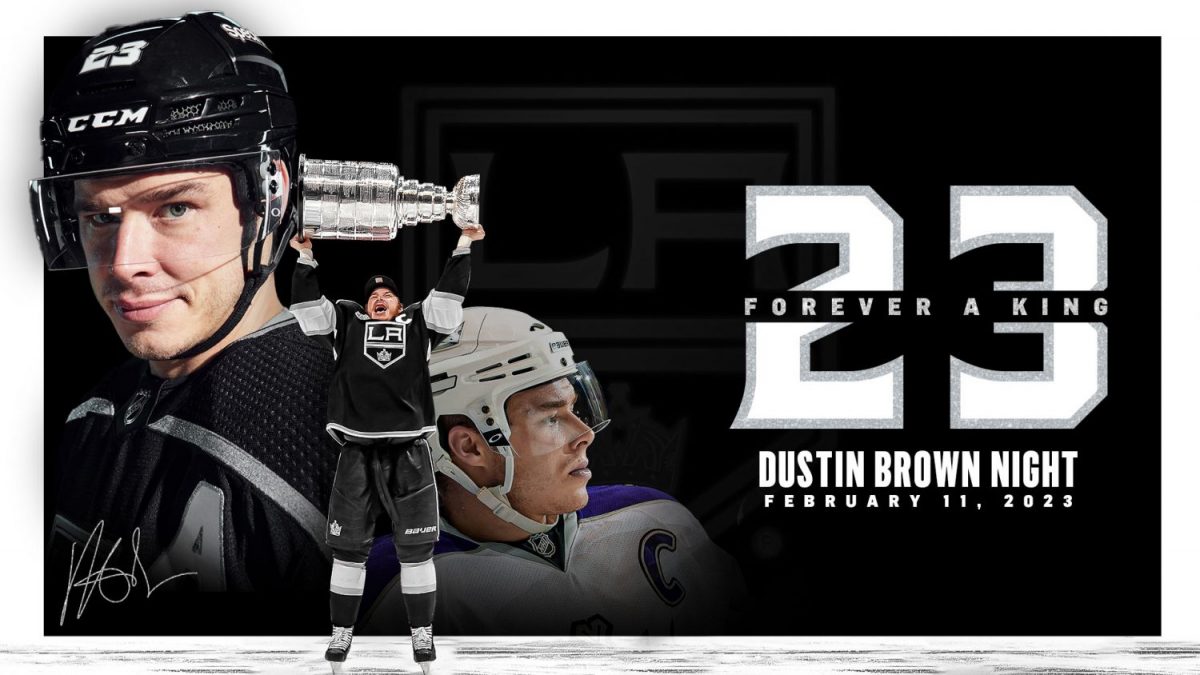 The LA Kings announced today that the organization will retire number 23 in honor of legendary captain Dustin Brown on February 11, as the Kings host Pittsburgh at Crypto.com Arena. Brown’s night will include many things, with the banner in the rafters and a statue outside of the building the highlights of the evening.

Brown’s number 23 is the seventh number in franchise history to rise to the rafters, joining Rob Blake (4), Marcel Dionne (16), Dave Taylor (18), Luc Robitaille (20), Rogie Vachon (30) and Wayne Gretzky (99). Brown’s statue will be just the third in franchise history for an individual player, joining Robitaille and Gretzky, in addition to broadcaster Bob Miller. A special night on the cards for all involved.

“Having my number retired is something I never imagined and is a humbling honor,” Brown said. “I am incredibly proud that I played for the LA Kings my entire career. With my number going to the rafters, I am honored to be amongst the King Greats, but it makes me think of the two banners already in the rafters, of which I am most proud. It took numerous people to raise those two banners; the same is true for this one. Thank you to all who have helped me achieve my dreams.”

There was naturally no hesitation from the organization in this particular instance – Brown was the first King to raise the Stanley Cup and played a franchise record 1,296 regular-season games with the organization, not to mention the 92 he contested in the playoffs, including a pair of championship-clinching games in 2012 and 2014.

For so many reasons, this was an honor that was always coming for Brown after he decided to end his playing career at the conclusion of the 2022 Stanley Cup Playoffs.

“What he’s done for this franchise had never been done before,” Kings President Luc Robitaille said. “He was drafted here, he became the captain and with all of his accomplishments – goals, points, hits, number of games played – and what he’s done for the franchise. He was the first captain to raise the Stanley Cup for the franchise and that alone was enough for him to get his jersey retired. But, when you add everything else on top of it and everything he’s meant to this franchise, it’s the ultimate no-brainer.”

Brown’s resume is long and decorated, beginning with two Stanley Cups raised as captain of the LA Kings. Brown is also the all-time leader in games played with the Kings franchise and among NHL players who spent their entire careers with one franchise, Brown ranks sixth all-time in games played. With the Kings, Brown ranks inside the Top-10 in goals (sixth), assists (eighth) and points (seventh) and he is one of just six players all-time with 100 or more power-play goals, ranking fourth in that category.

For a player with that laundry list of accomplishments, Robitaille noted there was no hesitation in not only retiring Brown’s number, but retiring it during his first season out of the NHL. When asked, the answer was simple – why wait?

“The guy deserves it, we should do it right away, we shouldn’t wait around and that’s the reason for me,” he said. “This guy has done so much for our franchise and we should honor him right away, because he deserves it.”

When it comes to jersey retirements, as noted, Robitaille is one person who knows a thing or two. Robitaille’s number 20 is one of six currently out of circulation for the franchise, as a result of his topping of just about every goalscoring list you can come up with.

He recalled back to his own jersey retirement to give a bit of insight into what Brown might be feeling. It’s never something you really think of as a kid – nor is any individual accomplishment or honor for that matter. But, once it happens, it’s a moment you can embrace for what it is, even though you never really set out to achieve it.

“To see your jersey retired, it’s a weird thing, because when you’re a kid playing hockey, you just want to play in the NHL, then you want to win the Stanley Cup,” he recalled. “You never think of accolades or merits, just for a single player, you always think about the team. So when you retire and a team retires your jersey, it’s like ‘wow’. You never played for that reason, but you never realize the impact you had on the community and on the team and so forth. For me, I never realized I’d get my jersey retired. It’s kind of a weird feeling and it’s a very humbling feeling.”

As we look ahead now to the 2022-23 season, February 11 has just become one of the most highly-anticipated dates on the calendar. It was already an exciting day, as the first game back from All-Star break, as well as the only visit of the season for Jeff Carter and the Pittsburgh Penguins, an added wrinkle that will bring one more long-time teammate into the building for a special night.

The only way to guarantee a ticket for that game will be via a ticket package. Tickets for this game can be secured with a Season Ticket Membership, group package, or event suite plan. For more information on those packages, CLICK HERE. Single game tickets for the game will be released at a later date.

“It’s going to be special,” Robitaille added. “Jersey retirements are always very special for the fans, because you appreciate what he’s done. There’s never a last thank you, because we’ll have more opportunities over the years, because it’s a real thank you, it’s a way to thank him and appreciate what he’s done. For him, it’s a great thing for his entire family. I’m really looking forward to it.” 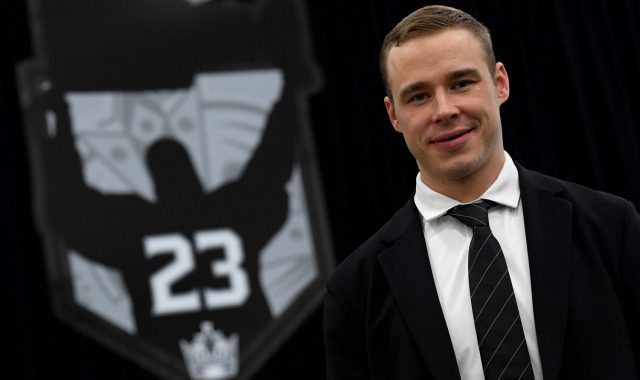