Kings hire Jim Hiller as an assistant coach, will work primarily with forwards and PP 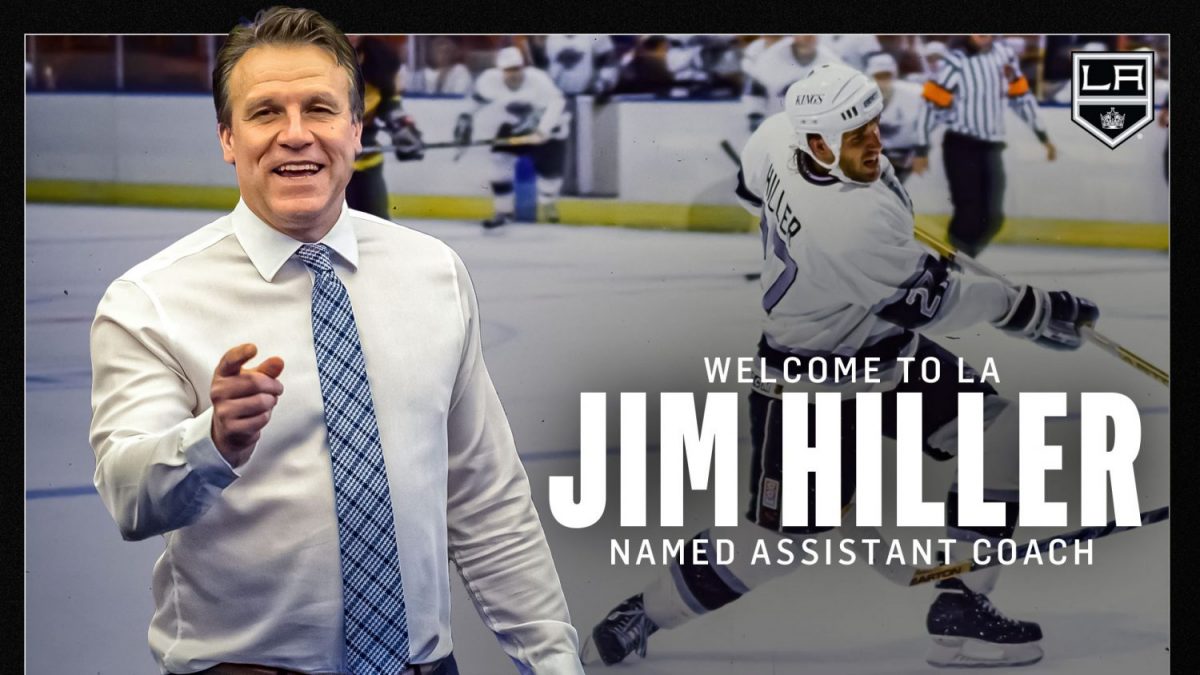 The LA Kings have filled their open assistant coach position with the hiring of Jim Hiller. Hiller joins Todd McLellan’s staff, alongside assistant coach, Trent Yawney and goaltending coach, Bill Ranford, along with video coordinator, Samson Lee and skills coach, Derik Johnson. Hiller will primarily work with the forwards and focus on the powerplay.

Hiller brings with him eight seasons of NHL coaching experience, all as an assistant, with Detroit, Toronto and New York. Hiller worked under Mike Babcock in both Detroit and Toronto, presenting a tie with Kings Head Coach Todd McLellan, who was an assistant with Babcock for three seasons in Detroit. Most recently, Hiller worked with Barry Trotz on Long Island with the Islanders over the last three seasons.

In his previous three stops, Hiller was primarily responsible for the forwards and the power play and that experience naturally plays well with the opening in Los Angeles. Marco Sturm bore those responsibilities over the last three seasons with McLellan and his spot was vacated on the NHL staff when he took the head coaching position for the AHL’s Ontario Reign. Hiller rounds out the NHL coaching staff, providing McLellan with an offensive complement to the influential Trent Yawney, who has been praised for his work with many of the team’s younger defensemen.

How exactly McLellan will break up duties remains to be seen, but Hiller’s focus with the Kings will be on the forwards and on the power play. McLellan’s background is also with forwards and the power play, however, so he’ll continue to have input there as well and as the team’s head coach, his say is final. The hope will be for the two to mesh well, with several young forwards coming through the ranks and the league’s 27th ranked power play in need of a spark.

Historically speaking, Hiller has improved a team’s performance on the man advantage when he’s come in. Looking at his track record, all three NHL clubs he’s worked for have improved on the man advantage within two seasons of his arrival. Hiller’s lone season in Detroit saw the team jump from 18th to 2nd in the leaguewide rankings, with an improvement of more than six percentage points. The Red Wings fell back to 16th after Babcock, Hiller and company departed.

In Toronto, while Year 1 saw a slight dip, the Maple Leafs ranked 2nd, 2nd and 8th over Hiller’s next three seasons with the club, though the club maintained a Top-10 ranking in 6th the season after Hiller left. It’s important to note here that Hiller’s arrival coincided with the talent influx of Auston Matthews, Mitch Marner and company, but even when those players were rookies, the power play was potent. In New York, the Islanders ranked third to last before Hiller’s arrival but steadily climbed the league’s leaderboards during his time in charge of that unit.

The point of this exercise is not to paint Hiller as a miracle worker, because that would create undue expectations, plus it makes the assumption that the only issue with the power play was the coach primarily in charge of it. That was not the case. The blame in Los Angeles falls across the board, on both players and coaches, with several areas in need of adjusting and improving. Minus the addition of Kevin Fiala, the personnel will likely remain more or less the same this season, depending on how the pieces available are aligned. The Kings can move players and units around, which we’ll presume they will in some way, but the likely scenario as it stands today is that the majority of the players used across the two units were playing on them in some capacity last season.

The point of this exercise IS to show that Hiller is an assistant coach with a strong track record in working with forwards and power plays, which is a welcomed add for the Kings. He has a history of success in those areas, as the numbers above support, and even though this situation is not just a “snap of the fingers” fix, his input and ideas will be welcomed as the Kings approach training camp in two-months time. How he and McLellan choose to rework things and deploy certain players will be an exciting development to watch for come September.

Additionally of note, Hiller played 40 regular-season games for the Kings during the 1992-93 season. Hiller made his NHL debut that season before he was traded to Detroit in January, where he played 21 additional regular-season games, as well as two in the postseason. Hiller went on to play twice for the New York Rangers, finishing his career with 63 career games played, in which he amassed 20 points (8-12-20).

Hiller, 53, most recently served in the same capacity for the New York Islanders, helping the club reach two Eastern Conference Finals. Prior to the Islanders, Hiller served on the Toronto Maple Leafs coaching staff for four seasons (2015-19). He also spent one season (2014-15) with the Detroit Red Wings, his first in the NHL.

Before joining the NHL full-time, Hiller spent 12 seasons coaching junior hockey in the Western Hockey League (WHL) and British Columbia Hockey League (BCHL). He originally spent three seasons (2002-05) as an assistant coach with the WHL’s Tri-City Americans before earning his first head coaching role with the Alberni Valley Bulldogs of the BCHL. After one season (2005-06) with Alberni, he returned to the WHL as head coach of the expansion Chilliwack Bruins.

Following three seasons (2006-09) with the Bruins, which included a pair of playoff appearances, he returned to Tri-City as head coach. While with the Americans, he led the organization to two division titles (2009-10, 2011-12), five playoff berths, a WHL Western Conference Final, and to the 2010 WHL Playoff Championship final. Following the 2011-12 season, he was tabbed WHL and CHL Coach of the Year after guiding the Americans to a 50-18-2-2 record with 104 points.

With the hire, Hiller returns to the organization that originally selected him 207th overall in the tenth round of the 1989 NHL Entry Draft. The forward made his NHL debut with the Kings and recorded 12 points (6-6=12) in Los Angeles before being traded to the Detroit Red Wings. He went on to skate in 63 NHL games, tallying 20 points (8-12=20) for the Kings, Red Wings, and New York Rangers.

In addition to his NHL career, Hiller played two seasons in the American Hockey League, collecting 89 points (42-47=89) in 116 appearances with the Binghamton Rangers. He also played 20 games in the IHL with the Phoenix Roadrunners (1992-93) and Atlanta Knights (1994-95). Hiller would then go on to skate six seasons (1996-2002) internationally, including five seasons in Germany with the Starbulls Rosenheim and Berlin Capitals as well as one season in Italy with the Milano Vipers. In Germany, he totaled 209 points (80-129=209) in 237 contests before adding 41 points (22-19=41) in 38 games in Italy, his final playing season.

The Port Alberni, British Columbia native attended Northern Michigan University from 1989 to 1992 after being drafted by the Kings. In his sophomore year, Hiller helped the Wildcats secure their first and only NCAA National Championship in school history, beating Boston University 8-7 in the 1990-91 season.

Happy Trails, CJ
In a separate move – I don’t believe I mentioned this at the time – but announced last week by the Anaheim Ducks, Ontario Reign assistant coach and former Kings player development staffer Craig Johnson is headed to Orange County as an NHL assistant coach. Johnson has been behind the Reign bench over the last two seasons, taking on additional responsibilities last season alongside Chris Hajt.

Johnson worked with the forwards and the power play in Ontario, after he worked as the organization’s skating specialist amongst the player development staff. Anaheim GM Pat Verbeek praised his development abilities, working with their young roster. Johnson had an influence on many of the young forwards who have come up through the system over the last handful of seasons, both from a development standpoint and a coaching standpoint. Hajt remains as the top assistant with Ontario, a role he has done great work in since he re-joined the organization back in 2019, earning praise from the NHL staff. Matt Millar (goaltending development) and Brad Schuler (video coach) also remain on staff, with both taking on additional responsibilities last season.