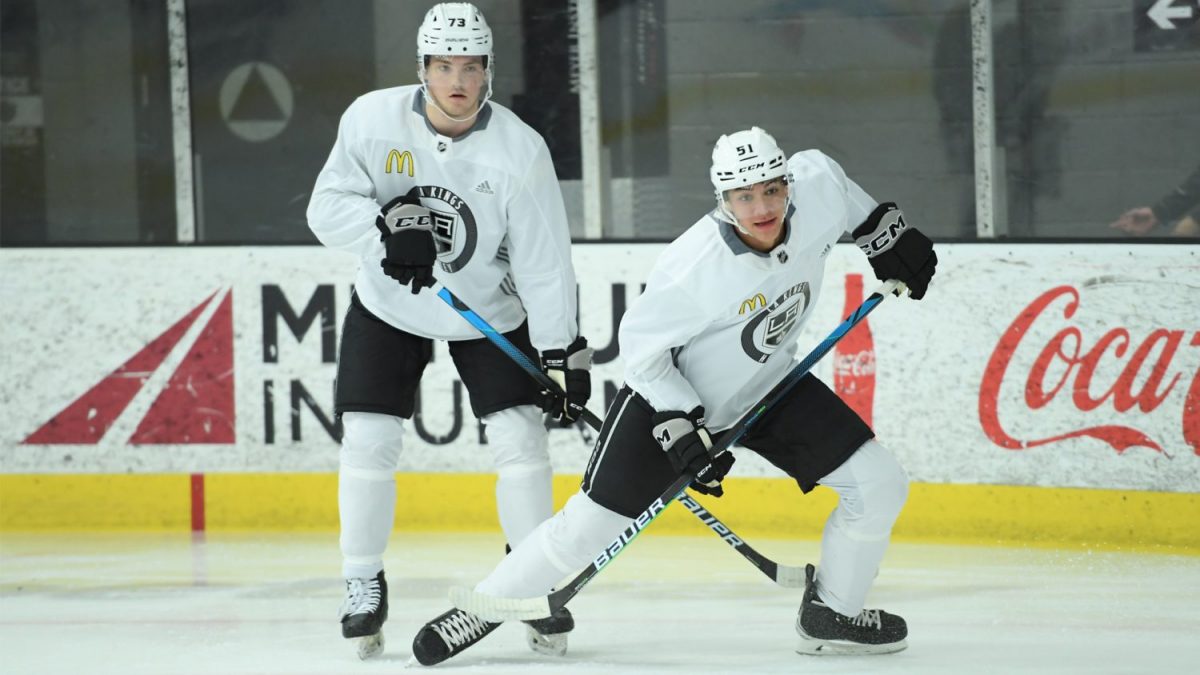 For six of the seven members of the 2022 LA Kings Draft Class, development camp last week was their first introduction into the organization.

Throughout the course of a jam-packed five days, with the first three being double sessions, it was certainly an intensive introduction.

First, take a step back and look at their schedule over the last week.

For guys like Jack Hughes, Angus Booth and Jack Sparkes, it featured at least a couple of cross-country flights. All three of those individuals were in Montreal for the NHL Draft, as they heard their names called in person at the Bell Centre. Following selections on Friday, all three jettisoned across North America, from Montreal to Los Angeles, to hit the ice just two days later.

After the first day, Hughes admitted he was a little bit tired. And it’d be hard to blame him. For the second-round selection, he was the team’s top pick in the draft and had perhaps as large a spotlight on him this week as anyone on the ice. Combined with the travel and festivities that preceded development camp, there’s certainly reason to be tired.

For the youngest player in college hockey last season, he admitted a step up in pace from his play at Northeastern to the scrimmages here at development camp, as he played alongside NHL-level players. He may have been a bit modest in his take, to be honest – he stood out during several sessions in a good way – but highlighted the quality of the group as a whole.

“It was a good skate and everything, a good pace,” he said. “There are a lot of good players, the speed here is that everyone’s fast,” he said. “It’s definitely a bit of a step up. It was tough especially in the scrimmage a couple of us forwards had to keep up a little bit.”

Booth and Sparkes came in with a bit less of that hype train, as mid-round selections, but the same level of travel and hustle across the weekend.

Selected in the fourth and sixth rounds respectively, Booth and Sparkes each lived their own dreams in Montreal, with Booth selected by the Kings in his home city. Then it was on to Southern California, to test their skills against the rest of the organization’s prospect pool. For Booth was extremely complementary of everything offered by the Kings.

“Honestly, everyone here is amazing,” he said. The staff and even the facilities, LA is a great place. It’s been amazing so far.”

Booth is a steady and reliable player, not a flashy one, but impressed the likes of Tobias Bjornfot with his play throughout the week. Bjornfot saw some of his own game in Booth, as the two played together frequently during a couple of the scrimmages.

Sparkes was focused on learning as much as he could throughout the week, being a sponge in drill settings and doing his best to apply what he learned during the scrimmages.

“It’s been an unreal experience, I’ve learned so much from Greener and OD,” he said. “It’s been a learning experience, being able to compete against all of these guys, it’s been a really high level.”

Sparkes has two things that you can’t teach – size and skating. Typically, players who stand at six-foot eight and were drafted in the sixth round only have the size element, with the hopes that the skating comes around. Sparkes is different, in that he skates quite well for a player of his size, but both player and organization understand that his development curve is a longer one. Sparkes is set to play another season of Junior A hockey in Canada, before transitioning to Michigan State and the NCAA. No rushing the process there. 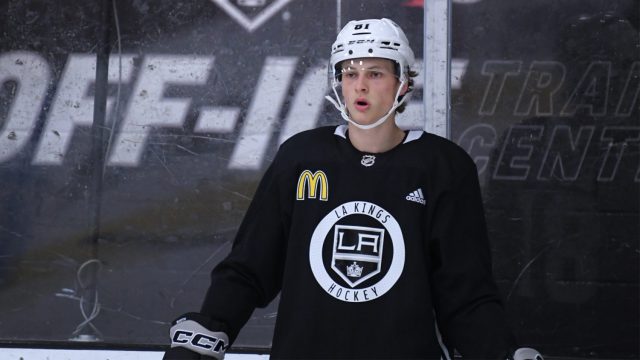 Looking next at forwards Kenny Connors and Tyler Wright, pictured together at the top, both players were selected by the Kings out of the USHL, the top junior league in the United States.

The USHL is a growing and developing league, one that typically sends the majority of its players to division-one colleges. It’s also, however, a bit of a younger league when compared to say the OHL in Canada, but nonetheless the level of competition is high. Connors was quick to note the level in his league, while also understanding that the level this week was a step higher.

“Obviously the USHL has turned into a pretty prestigious league, a lot of incredible players, but there’s just different top-end speed out here, when you see guys like Byfield out there, hitting full stride,” he said. “There’s a lot more top-end guys here, compared to the USHL, where you might hit one or two lines, it’s everyone out here that is playing at that top end.”

The Minutemen play in one of the NCAA’s top conferences, Hockey East, and he’ll head there come the fall, meaning we won’t see him at rookie camp in September. His first experience with the Kings was a strong one though, and one he’ll take with him in his development moving forward.

“You can tell that this is a first-class organization,” he said. “There’s a lot of detail and they care a lot about a lot of the things that you look for. Nothing to complain about. It’s been great, everything’s been really good.”

From one USHL forward to another, Jared Wright stood out this week by playing his game on the ice. Wright is one of the best skaters in the Kings pipeline and showcased an ability to use it in certain situations throughout the course of development camp.

Like Connors, Wright played in the USHL last season and also like Connors, he was an overaged draft pick, meaning he was selected at 19 instead of 18, after both players went undrafted in 2021. After each player made some major strides in their “Draft Plus 1” year, they joined the Kings organization and looked to get everything they could out of their first weeks in Los Angeles.

“There’s a lot of different backgrounds out there and there’s so much talent on the ice,” Wright said. “You just try to learn as much as you can, especially from the veterans here, and try to pick up what you can, they’re so good with their details and everything. Just pick up what you can from the coaches and those big-time players.

Unlike Connors, however, Wright is uncommitted on his NCAA destination. He’s set to return to Omaha of the USHL in the fall for another season and is narrowing in on a college destination, though he had not committed as of our conversation last week.

The final two members of the Kings 2022 Draft Class – defenseman Otto Salin and forward Kaleb Lawrence – were the only two that we did not have the chance to catch up with this week. Salin was in Finland and was not able to attend, while Lawrence was nursing an injury throughout the week that limited his on-ice participation.

Later on this week, we’ll take a different angle to approaching this draft class – Mark Yannetti’s overview. Yannetti joined myself and Jesse Cohen on Jesse’s podcast, and we got his analysis of all seven players selected, which we’ll share here over the next couple of days. 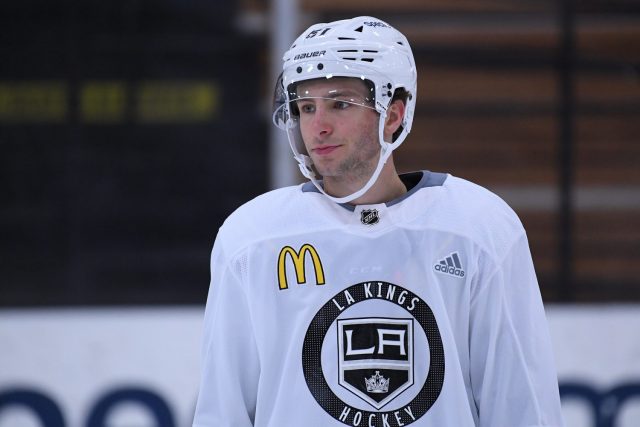