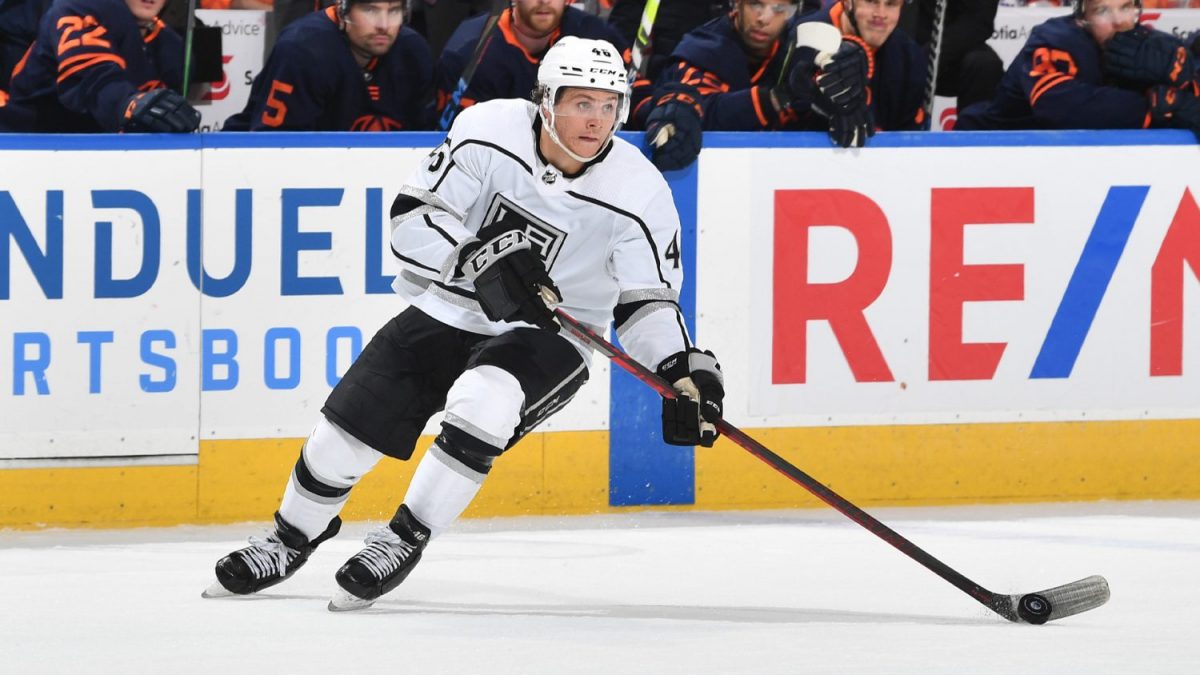 Kicking off your week with another season in review, Insiders!

With a new contract extension in hand, we look at forward Blake Lizotte’s 2021-22 campaign, one that opened up a lot of eyes around the NHL. A player thought to be closer to the roster bubble than a lock coming into the season, Lizotte enforced himself into the everyday lineup, cementing his status as an energetic, pesky, bottom-six center who was an important piece for the Kings each and every night.

Blake Lizotte’s performance was one of the bigger success stories throughout the organization this season. Lizotte helped to establish a consistently effective fourth line, producing both from a numbers standpoint and an energy standpoint. Rarely could you find a night on which Lizotte didn’t drive energy for the Kings and on nights when others needed it, Lizotte was there to help drag them along. That combination of assets has not been lost on his head coach.

“Goals, assists, points, so many players evaluate themselves on that and I think Lizzo takes great pride in those, but he has an impact without being on the scoreboard,” Head Coach Todd McLellan said. “He’s the little engine, he drags a lot of players into the game, he drags our team into the game. I don’t think he cheats anybody in the organization, whether it’s on the ice or off the ice, and those are good players to have in black and silver.”

Trending Up – Lizotte’s numbers from a puck possession standpoint show him very close to his impressive 2019-20 campaign, with a few career highs and totals very similar to his numbers from his first full professional season. His CF% and SCF% were both the best metrics he’s posted in his career, while his SCF and HDCF on a per/60 basis were his highest totals across three professional seasons.

Trying to put Blake Lizotte into a statistic is actually quite difficult, but I’ll do my best to find some that represent him. Lizotte ranked second amongst Kings forwards in terms of most takeaways and second amongst Kings forwards in terms of fewest giveaways, both on a per/60 minute basis. I don’t typically like those stats, because they rely on a judgment call by those keeping score and tend to vary a lot from building to building. However, in Lizotte’s case, they appear to be an accurate representation of a tenacious forechecker, someone who forces turnovers in the offensive zone, as well as a defensively responsible center in his own end, one who was trusted in several situations and was responsible with the puck when he had it.

Lizotte was also at 51.7 percent in the faceoff circle this season, his best career total. Lizotte has gradually improved in the faceoff dot over the course of each of his three professional seasons and is now close to 52 percent. With Anze Kopitar and Phillip Danault both over 53 percent, the Kings ranked fifth in the NHL at 52.2 percent, with Lizotte’s improvements helping to bolster that total.

Trending Down – If you can accept who Blake Lizotte is as a player and what he provides within his role, you likely won’t have a ton of negatives about the player that he is. He is 5-9, 170 pounds and that’s not changing. No player on the Kings took more hits this season than Lizotte, both in total and on a per/60 basis and across the NHL, just three players took more hits on a per/60 basis. That is a byproduct of both his stature and the style of game that he plays an to his credit, Lizotte has never shied away from physicality and delivers some of his own in ways that benefit the Kings. So, while he certainly does receive hits, he brings his own brand of physicality and is back up as quickly as he goes down.

It’s hard to find too many more negatives with Lizotte’s season, when compared to season-entering expectations. Compared to other players around the NHL with similar time on ice, Lizotte compares favorably in terms of assists and points on a per/60 basis and is towards the middle of the pack in goals. Much of the criticism that came Lizotte’s way in the past came down to his role and usage. Lizotte saw a lot of time as a second-line center for stretches and many faulted him for not producing at the level of a 2C. Slotted into the correct place in the batting order, Lizotte’s production this season matched his role and the appreciation for what he brings went up accordingly.

2022-23 Status – Lizotte earned himself a two-year contract extension during the season, one that keeps him tied to the Kings organization through the 2023-24 season.

Lizotte’s play this past season earned him a place in the lineup each and every night and his contract extension is a validation for both his style of play and contributions to the Kings. Lizotte slots in behind top-six centermen Anze Kopitar and Phillip Danault and barring any major developments he will occupy one of the team’s bottom-six center positions during camp. Lizotte has moved himself from a player battling for a spot to a player in command of one, with his two-year contract extension validating that for him progress.

Coming up later the week, we’ll look at the first-line duo of Kopitar and forward Adrian Kempe, with the ups and downs from their seasons analyzed here on LAKI.