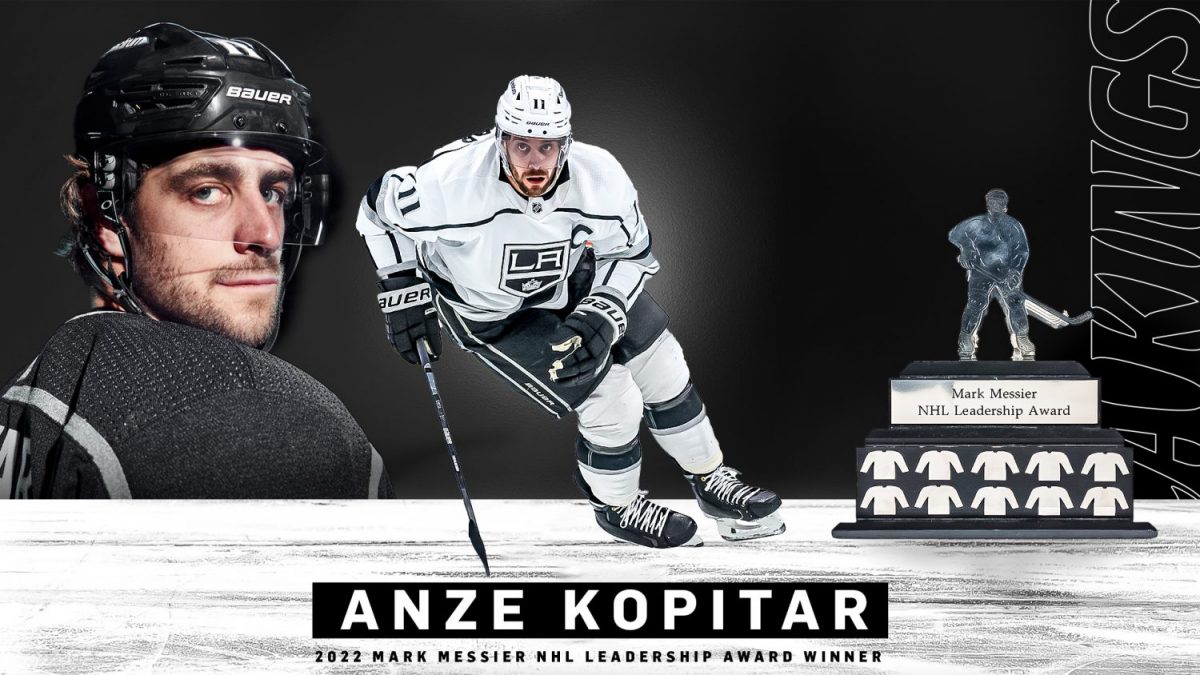 As announced during tonight’s game between the New York Rangers and Tampa Bay Lightning, LA Kings captain Anze Kopitar has been selected as this year’s recipient of the Mark Messier NHL Leadership Award. The award is presented to the “player who exemplifies great leadership qualities to his team, on and off the ice, during the regular season and who plays a leading role in his community growing the game of hockey.”

Kopitar becomes the second player in LA Kings history to win the award, joining Dustin Brown in 2014. To determine the winner, Messier takes suggestions and candidacies from around the NHL, via team and league personnel, to compile a list of worthy nominees for the award. From there, the selection of the overall winner is made by Messier alone.

“I’m very thankful to be a part of the hockey community, it’s given me so much and I’m very humbled and honored just to be around the game of hockey,” Kopitar said during his acceptance speech shown below. “It’s been great and with that being said, I’d just like to thank everyone in my circle, starting at the top with Mr. and Mrs. Anschutz and the whole LA Kings organization. Between Luc [Robitaille] and Rob Blake, they’ve grown me into a better man than I was 16 years ago, and obviously the fans in LA are very passionate, very loud and we were able to get back into the playoffs which was really fun for them and last but not least, my family. From the top down, my grandparents, my parents and now my family too, with two good kiddos at home that keep me humble all the time. I get to learn a lot from them too and of course my wife, who keeps everything in check when I’m gone and when I’m home. It’s great to have a support system around like that and it wouldn’t be possible without any of them.”

Kopitar is one of two players in NHL history to win both the Selke Trophy and Mark Messier Leadership Award (Patrice Bergeron) and is the only player in league history to win the Selke, Messier and Lady Byng Trophy throughout a career.

Upon the announcement during the first intermission of today’s Rangers-Lightning game, Kopitar joined the ESPN television broadcast for an interview with Messier, a member of the intermission panel, to accept the award.

“Yeah, I think it’s appropriate, a long-serving guy who lifted the cup wearing the “C”,” Kings Head Coach Todd McLellan said of Kopitar’s act. “Tip of the hat to Anze for thinking of that, executing it and making it happen. That wasn’t management-driven or coach-driven, that just goes to show how tight those individuals are and what they mean to each other. A very honorable thing.”

Kopitar on accepting the award and growing the game in Southern California
First and foremost thank you for the award, it’s a great honor. We’re all trying to grow the game and between the LA Kings and myself, I think we’ve done a good job around here in So-Cal, with the help of the Anaheim Ducks team, just getting the game spread throughout So-Cal. I think we’re doing a pretty good job.

The Mark Messier NHL Leadership Award is given to the player who exemplifies great leadership qualities to his team, on and off the ice during the regular season.@AnzeKopitar sat down with Mark Messier to give thanks and to discuss his impact on the hockey community. #NHLAwards pic.twitter.com/P66s7XukOw

From the NHL’s official release –

Kopitar has been a prominent face of the franchise since arriving in Los Angeles in 2006, helping lead the Kings to unprecedented success on the ice and taking pride in representing the club in the community.

The 34-year-old center led the team in scoring for the fifth consecutive season and for the 14th time in his 16 NHL campaigns with 19-48–67 in 81 games, helping the club return to the Stanley Cup Playoffs for the first time since 2017-18 and post its best record since 2015-16. He is one of just two players in NHL history to lead his club in scoring as many as 14 times, surpassed only by Gordie Howe (17 times with the Detroit Red Wings).

Serving as captain since 2016-17, he also was voted by teammates as the Ace Bailey Memorial Award winner (most inspirational player) in both pandemic-shortened seasons of 2019-20 and 2020-21.

As a spokesperson and contributor in several team fundraising events throughout the year, Kopitar strives to represent the organization at every opportunity. He has participated in a number of community programs, generously volunteering his time to local institutions that include the Children’s Hospital Los Angeles, Make a Wish Foundation, Wags and Walks and the Kings Care Foundation.

Kopitar also hosts a hockey academy each year in his native Slovenia, where the Kings’ 1st-round draft pick from 2005 is widely recognized as the greatest player in the nation’s history. The academy serves aspiring youth players, inspired by the trailblazing career Kopitar has forged, who may not have access to similar programs. Typically attracting nearly 200 players per year, the academy has drawn players from more than 15 countries.

A full list of past Mark Messier NHL Leadership Award winners, in addition to further information on the award, is available here.