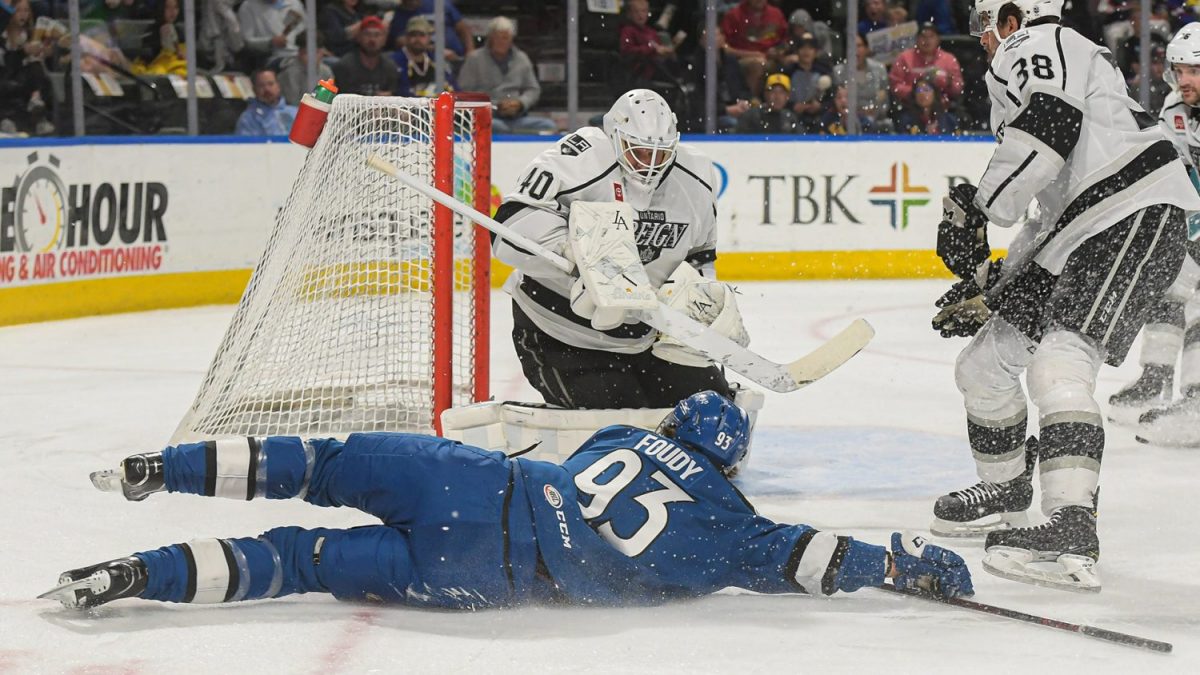 TONIGHT’S MATCHUP: The Reign are in need of a victory to keep their Calder Cup Playoff run alive as they return home Sunday night for Game 3 of the Pacific Division Semifinals against the Colorado Eagles at Toyota Arena.

HEAD-TO-HEAD: The Eagles hold a 2-0 series lead, winning both contests this week in Northern Colorado. The first two games of the series have been nothing alike as Game 1 was a lopsided rout which saw Colorado control large portions of the game, while Game 2 went to overtime after a late two-goal comeback by Ontario in the final minutes. The Reign scored twice with an extra attacker to force the extra session, but ultimately fell short when Jean-Luc Foudy scored at 13:37 of OT.

REIGN VITALS: Ontario was one shot away from not only winning Game 2, but more importantly coming home with an even series. Instead, the only thing it has to show for its improbable comeback in the third period is a renewed confidence. As the Reign came off the ice on Friday night, bruised and tired, the belief was there that they can play toe to toe with the Eagles.

It wasn’t dominance, but there were stretches of play where Ontario controlled things and put the Eagles on their heels. That included the first seven minutes of overtime, when Colorado took back-to-back penalties which opened the door for the Reign power play, which was unable to take advantage and produce a winner. Ontario posted four shots on net during that stretch, putting as many pucks as they could toward the net and goaltender Justus Annunen.

“Credit to our guys for continuing to play and continuing to push,” said Reign Assistant Coach Chris Hajt after Game 2. “This is playoffs; anything can happen at any time. I’m obviously disappointed we weren’t able to get it done. We had opportunities in the overtime period, but we weren’t able to get that last goal. We’ll take the positives from it and move on to Sunday and get back home.”

Saturday’s travel from Colorado to Southern California kept the Reign off the ice for the day. It’s not a lot of time for recovery but rest assured those who have played in every one of the team’s four postseason games probably needed a day to heal some bumps and bruises and clear their mind.

With goaltender Matt Villalta unavailable for Game 2 due to an emergency recall by the LA Kings, veteran Garret Sparks was called on for his first action since mid-March. Sparks delivered for the Reign with a performance that kept his team in the game. His toughest task was the second period when he stopped 17 of the 18 shots Colorado sent his way to keep the Eagles’ lead to just one goal. At this time, it’s unknown whether Villalta will be available for Game 3 on Sunday night, but the Reign can now feel confident that if needed, Sparks is healthy and up to the task in a must-win game.

It’s also unclear if there will be any other changes to the lineup for Ontario with a group of players who spent the final months of the regular season in the NHL with the Kings now potentially available after LA dropped Game 7 to the Edmonton Oilers on Saturday. In addition, there’s the status of Alex Turcotte, who was injured in Game 1 and unable to return for Game 2. Getting anyone back would force a hard decision for the Reign coaching staff on how to structure the team’s lineup.

With Akil Thomas back in play for Game 2, he replaced Turcotte at the center position, playing with Austin Wagner and Taylor Ward. Jaret Anderson-Dolan has been reunited with Vladimir Tkachev and Samuel Fagemo. For reference, here’s how the Reign lined up in Game 2 –

EAGLES VITALS: The Eagles were able to pick up a victory in Game 2 and stay unbeaten in postseason play without some of their impact players. Both Kiefer Sherwood and Andreas Englund were unavailable due to league suspensions for illegal hits in Game 1, and forward Dylan Sikura, who finished the regular season with 73 points (10 of which came in six games against the Reign), has also missed the first two games of the series due to an injury.

While Sherwood and Englund will return for Sunday’s potential elimination game, Sikura could be in line for his series debut as well.

For reference, here’s how the Eagles lined up in Game 2 on Friday –

Colorado has used its speed and aggressive playing style to force the Reign into playing a more conservative game while they were on the road. The style has paid dividends as the Eagles have scored five or more goals in each of their first four postseason games, all of which have been played in Loveland.

Forward Jayson Megna had a big night in Game 2, scoring two goals and an assist to lead Colorado. Megna was also on the scoresheet in Game 1 with an assist and scored four times against the Reign during the regular season, posting nine points in five games vs. Ontario. Defenseman Jordan Gross, already honored as the league’s Defenseman of the Year for his performance during the regular season, also posted a 3-point night with a power play goal and two assists in Friday’s game, while leading all skaters with eight shots on net.

Annunen made his fourth consecutive postseason start and kept the Reign at bay until the final minutes, stopping 32 shots to stay unbeaten during the Calder Cup Playoffs. However, the four goals allowed were the most he’s given up in any of his appearances. Annunen holds a goals-against average of 2.13 and a save percentage at 0.931 during the postseason, which is well above his 3.01 GAA and 0.893 save percentage he posted in 48 regular season contests.

Desperation Mode
Back-to-back losses to start the series in Colorado has the Reign on the brink. The team must win three straight contests this week to advance or else their season will come to an end. That said, Ontario is well-aware it hasn’t played its best hockey yet and is capable of a better performance at home.

For whatever reason, whether it be their opponent, the tough road environment in a high altitude, or personnel changes both up front and in goal, the Reign haven’t been able to get to their style of play. Now is when the team will have to show desperation and maybe that could give them an extra boost to turn things around.

We got a glimpse of that desperation late in Game 2, when Ontario came from two goals down to force overtime with a pair of late tallies with their net empty at the other end.

“It showed a lot about our group,” said defenseman Christian Wolanin after the game. “I hope we can remember that going into these next three games.”

The Reign will empty the tank in Game 3 in hopes of turning the momentum around and extending the series in front of their home fans at Toyota Arena. Even though Colorado is a single win away from advancing, the Eagles will have to pick up that victory on the road, somewhere they haven’t been in a month with their last game away from the Rocky Mountains coming on April 16.

Tka-Ching!
Tkachev has given Ontario a couple great offensive performances during the playoffs, scoring three points in Game 1 during the opening round against San Diego and was instrumental in the team’s comeback during Game 2 in Colorado on Friday, factoring in on both late goals.

First, Tkachev fed the puck to Akil Thomas, who was open on the inside of the right circle in the Colorado end for a one-time strike that got the Reign back within striking distance. Then, as time was running out, he picked up a loose puck at the top of the offensive zone and brought it down to the left circle where he found room to let go of a wrist shot that went into the top right corner of the net.

All season it’s been clear that Tkachev has a high level of talent and excellent offensive instincts, but the clutch performance isn’t something that Reign fans have seen too often in his first North American professional year.

“Vladdy just makes plays,” Hajt said when reflecting on Tkachev’s third period performance on Friday. “He’s cool as a cucumber with the puck. He has great vision and a great ability to make things happen and he definitely did that tonight. We need him to continue to do that.”

Not known as a shoot-first player, with only seven of his 29 regular season points coming on goals, it feels like Tkachev’s teammates have more confidence in his shooting ability than he does himself.

Wolanin echoed that sentiment in his comments after the game as well, mentioning that Tkachev has a great shot.

“It was just awesome,” Wolanin said. “There was just so much adversity and ups-and-downs throughout the game. For him to bury it for us like that, it was just great.”

Tkachev now has five points from his four playoff appearances, but they’ve all come in two games. He missed a lot of time down the stretch with injuries, playing just four games in February before returning for most of March and then only suiting up for four games in April.

The Reign are counting on anyone and everyone for offense to stay in this series and if Tkachev can continue to produce, he’ll be an x-factor for the club when they need it most.

Thomas Turns It On
Another offensive threat during the postseason has been Thomas, who has remarkably scored goals in all three of Ontario’s playoff games that he’s been in the lineup for.

Thomas missed Game 1 in Colorado but returned for Game 2 and not only scored but finished the contest with a +2 rating. In his three playoff appearances, Thomas has four goals on 10 shots, which is a 40% shooting percentage, and has totaled a +5. The first time he was on the ice for a goal against during the postseason was on Gross’ power play tally in the first period on Friday night.

After his two-goal performance to open the playoffs against San Diego, Hajt went into detail about Thomas’ preparation and hard work has been like.

“He puts so much time, effort, and work into his game,” Hajt said. “He takes his craft seriously and he’s always doing extra and taking care of his body. He’s doing so many things right with wanting the puck, making plays, and being a responsible 200-foot player.”

Going into the playoffs, Thomas mentioned that he was acting like it was a new season. Long gone are the nights where he was frustrated back in January and February.

“I tried to believe that it was coming,” Thomas said. “Obviously it was really tough during that stretch. I was trying to find it and was frustrated, but with that time I missed in kind of just needed to happen. Right now, I’m just happy that I’ve found my stride and I’m not thinking about the first 20 games anymore. I’m just focused on the moment and my opportunity going forward. You never know when it’s the last game in the playoffs so I’m just trying to build up my momentum.”

Ontario is hoping tonight’s game won’t be its last this season, and they have an opportunity to extend the series while flipping the momentum. To help that pursuit, Thomas will attempt to get on the scoresheet again and if he can find the back of the net, that would extend his scoring streak to four straight games.

The puck drops to begin Game 3 at 8 p.m. tonight inside Toyota Arena! We’ll have postgame coverage once things go final as the Reign look to extend their season.