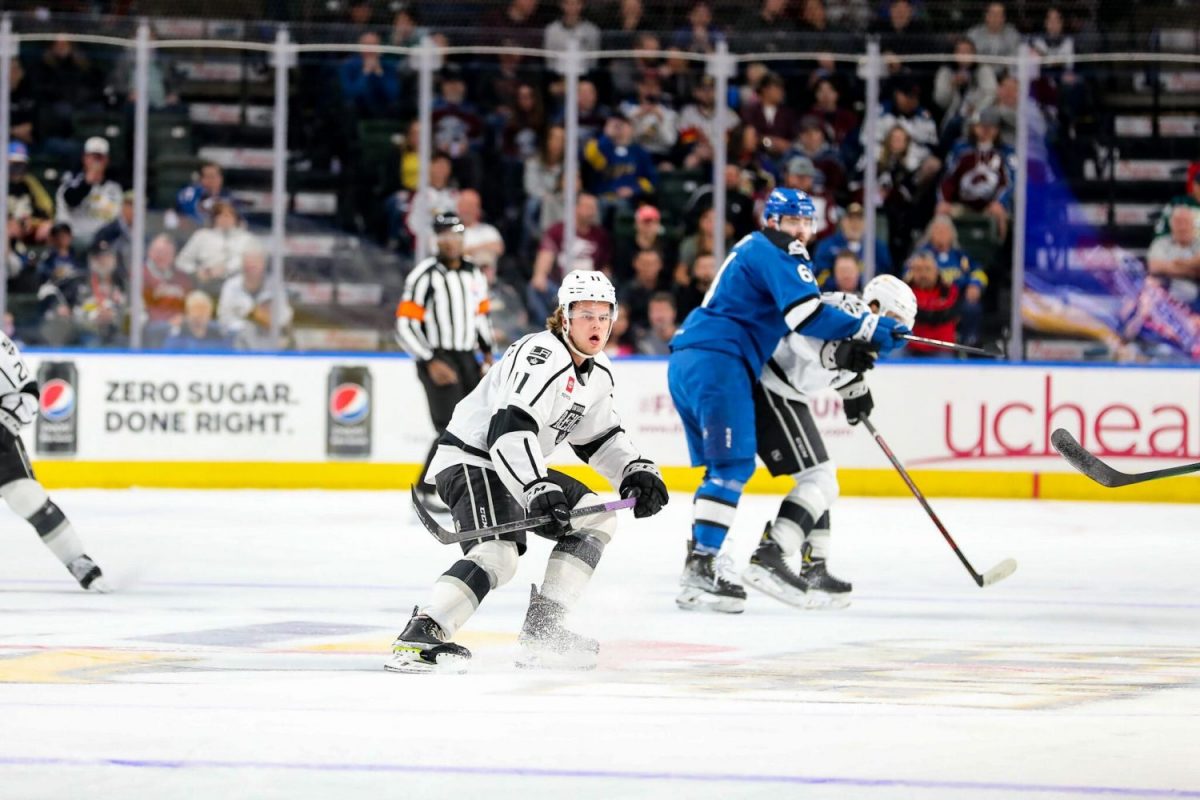 HEAD-TO-HEAD: The Eagles had the upper hand in the teams’ regular season series, taking four of the six decisions. Ontario won once inside Toyota Arena on Nov. 7 and then took the opener of a three-game set in Loveland April 20 but were unable to win any of the other four matchups that were all played last month. Defender Frederic Allard posted eight points in nine combined games against Colorado during the regular season with both Ontario and the Milwaukee Admirals on three goals and five assists. Forward TJ Tynan played in five of the six matchups against his former team for the Reign and posted eight points on a goal and seven assists. Forward Akil Thomas also scored a team-high four goals in against Colorado and had five points in five games.

REIGN VITALS: Fresh off a two-game series sweep over rival San Diego in the opening round of the postseason, the Reign have had five days to recover and prepare for Wednesday’s Game 1 in Colorado.

Ontario flew east to the Rocky Mountains on Monday afternoon, giving everyone a full day on Tuesday to practice and acclimate to the climate and altitude. Now as the group turns the page, they’ll have their hands full with a tough Colorado team that also moved past the first round in just two games.

Goaltender Matt Villalta started both of Ontario’s first round games and figures to be the man in between the pipes again as the next series begins. Villalta allowed two early goals in Game 1 to the Gulls but rebounded and held on for a victory before stopping 25 shots the following night to get his team the sweep. The third-year pro was also in goal last May when the Reign faced Colorado in a winner-take-all contest to open the Pacific Division playoffs, making 24 saves in a losing effort during Ontario’s overtime loss.

From watching Tuesday’s practice in Northern Colorado, the Reign appear to be close to full health, with forward Tyler Madden and goaltender Garret Sparks both taking part in the skate. Ontario went with the exact same lineup for both games of last week’s series against the Gulls, shown below for reference. We’ll see if the team’s coaching staff shakes anything up as they attempt to match up with Colorado.

EAGLES VITALS: Colorado ended its regular season by hosting the Reign for three games before sweeping the Henderson Silver Knights in two contests during round one of the Calder Cup Playoffs. The series win was the team’s first in Calder Cup Playoff play since joining the AHL for the 2018-19 season.

For reference, here’s how the Eagles lined up in Game 2 against Henderson on Friday night –

Defenseman Roland McKeown led Colorado in scoring during their first two postseason tilts with four assists and a +4 rating, while forwards Jean-Luc Foudy and Jayson Megna each scored twice. Attackers Martin Kaut (1g, 2a), Kiefer Sherwood (1g, 2a) and Dylan Sikura (3a) all had three points as the Eagles outscored the Silver Knights by a 10-4 margin. In total, eight different players scored goals for Colorado in the series.

Sikura led the way against Ontario during the regular season, posting 10 points in six games on six goals and four assists, including a hat trick in the team’s final meeting. Just behind him, Megna and Sherwood both had nine points in five games, each with four goals and five assists.

Goaltender Justus Annunen played both games of the series in net, allowing just four goals on 60 shots for a GAA of 2.00 and a 0.933 save percentage. Annunen was recalled by the Colorado Avalanche after the series due to an injury to Darcy Kuemper and it remains to be seen if he will return in time for Game 1. If Annunen is unavailable, Hunter Miska and Jake Kupsky are the other options in goal on the team’s roster. Miska had the best numbers of all the team’s netminders against the Reign during the regular season, going 3-0-0 with a 2.00 goals-against and a 0.931 save percentage.

Special Teams Boost
Arguably, both of Ontario’s first round games were decided by special teams. Game 1 on Wednesday featured two man-advantage goals for the Reign by Samuel Fagemo and Vladimir Tkachev, as well as a shorthanded goal by Austin Wagner. Combined with holding the Gulls to an 0-for-4 mark on their power play, Ontario got off to a good start in the series. The following night didn’t feature as much success on the power play, but the Reign got a goal when they needed it most, on a man-advantage that came 2:05 into overtime.

Even though Ontario had been 0-for-4 on the power play during regulation time in Game 2, the team’s success on the man-advantage all year had them confident when the penalty was called early in OT.

“I think of [Cameron] Gaunce on the bench during regulation,” said Assistant Coach Chris Hajt after the game. “He mentioned to the power play ‘stay with it because you’re going to get your opportunity’. We were able to get our opportunity and they stuck with it. Those are the ebbs and flows of playoffs. You’re going to have teams that push back and not want to go home, and just overall the competitiveness of playoffs. You don’t want to get too high or get too low, and just stay the course. Ultimately, we got it done.”

The man who scored the difference-maker on that power play in overtime, TJ Tynan, did it on the fourth shot of the extra session in a span of just 2:31. Watching the way Ontario moved the puck on their power play in overtime, versus what they did during regulation, you noticed a clear shift in philosophy with an emphasis on getting the puck to the net as quickly as possible.

After the game, Tynan remarked that the group decided to simplify things and gave credit to his linemate Jaret Anderson-Dolan (JAD), who provided a great screen of goaltender Lukas Dostal as he was shooting from the right circle.

“[The Gulls] were doing a really good job all night,” Tynan said. They were frustrating us. You’ve got to give credit to them, but we just decided we were going to throw pucks to the net, especially in overtime. I mean, why not? JAD did a great job, as always, in front of the net. I don’t think the goalie saw it at all. I saw an opening and fortunately it went in. That’s all JAD making the screen in front.”

Special teams will no doubt play a big factor again in the series with Colorado, and Ontario is hoping to continue the success they had on the power play against the Eagles during the regular season when they scored 10 man-advantage goals in the six games during 23 opportunities. They’ll also need a dedicated effort on the penalty kill, as Colorado produced nine power play goals of their own in the series.

M-V-TJ
Speaking of Tynan, the team’s leading scorer has had plenty of attention focused his way over the last week. After scoring the winning goal on the power play in overtime Thursday against San Diego, the forward was announced as the winner of the AHL’s Les Cunningham Memorial trophy on Monday for the second straight year as the league’s Most Valuable Player.

“It’s a tremendous award and a great honor,” Tynan said after being told he had won the vote.  “I’m very fortunate to be here. It’s a great team, we’ve got a lot of great people around me, the staff, coaches, players, so it’s a tremendous honor for sure.”

Now, the Orland Park, Ill. native is preparing for a playoff series against his former team where he spent his two previous seasons before signing with the LA Kings last summer. In 69 regular season games with the Eagles, Tynan combined for 82 points on 13 goals and 69 assists.

Like the rest of the Reign, he’s now gotten used to playing against his former club with five head-to-head matchups in a span of just over a month.

“I had a great two years here and all the guys are great,” Tynan said after returning to the Budweiser Events Center for the first time on April 20. “Some of my good friends are over here still so it was a lot of fun. It was a little weird at first but once the game was going it was good. It’s always nice to see your old teammates and good friends of yours.”

Ontario will need Tynan to be his most valuable self during the series, both on the man-advantage and at even strength. He’s expected to continue to play with Martin Frk, who he helped set up for 40 goals during the regular season and another tally during the first round of the playoffs.

“He’s a terrific leader and such a competitor,” Hajt said. “He takes such pride in his craft, and how he plays and wants to win. He’s been a tremendous part of our team, coming in new, fitting in, leading, I can’t say enough about what he’s done. It’s remarkable and you can look no further than the game-winning goal against San Diego to close the series out. When there’s key moments and key plays that need to be made, he makes them and we’re thankful he’s on our team.”

Starting On The Road
Wednesday’s Game 1 brings a new challenge for the Reign, opening a playoff series on the road in front of what is expected to be a loud crowd in Colorado. Just as the Reign have been well-rested, so are the Eagles who have not played a road game since April 16.

While not as short as a three-game series, the best-of-5 format is still condensed, putting pressure on both teams from the start. If Ontario can win a game on the road, they’ll be in position to return home with an advantage. But on the other hand, if the Eagles claim both games in Loveland, the Reign will be pushed to the brink and all three remaining contests in the series at Toyota Arena will be potential elimination games.

“Going into Colorado you obviously know about the altitude,” said Reign defenseman Christian Wolanin when asked about the beginning of the series. “It’s nice we got that experience at the end of the year and we kind of treated those like playoff games and it felt like playoff games. We know what we’re getting into and we know how good of a team they are. We have a lot of respect for them and hopefully they have the same for us.”

Before winning each of their first round playoff games, Colorado finished the regular season with a 0.632 points percentage in front of their fans with a record of 21-12-1. Whether it’s the loud environment with a full crowd, the altitude or the excellent play of the Eagles, the building hasn’t lived up to the name of the city it’s in, showing little love to opponents.

“Whether you want to admit it or not, the altitude’s a real thing,” said Reign forward Jacob Doty. “It’s a small building that gets pretty loud and wild so for us to taste that a few weeks ago was nice. We know what to expect heading in there and hopefully we can come out of there with a couple wins.”

The series gets underway tonight at 6:05 p.m. PST! Josh Schaefer and myself will be on the call for all the action with streaming video on AHLTV and live audio on the team’s Mixlr channel. Our full coverage continues here on LAKI with postgame thoughts later on tonight! 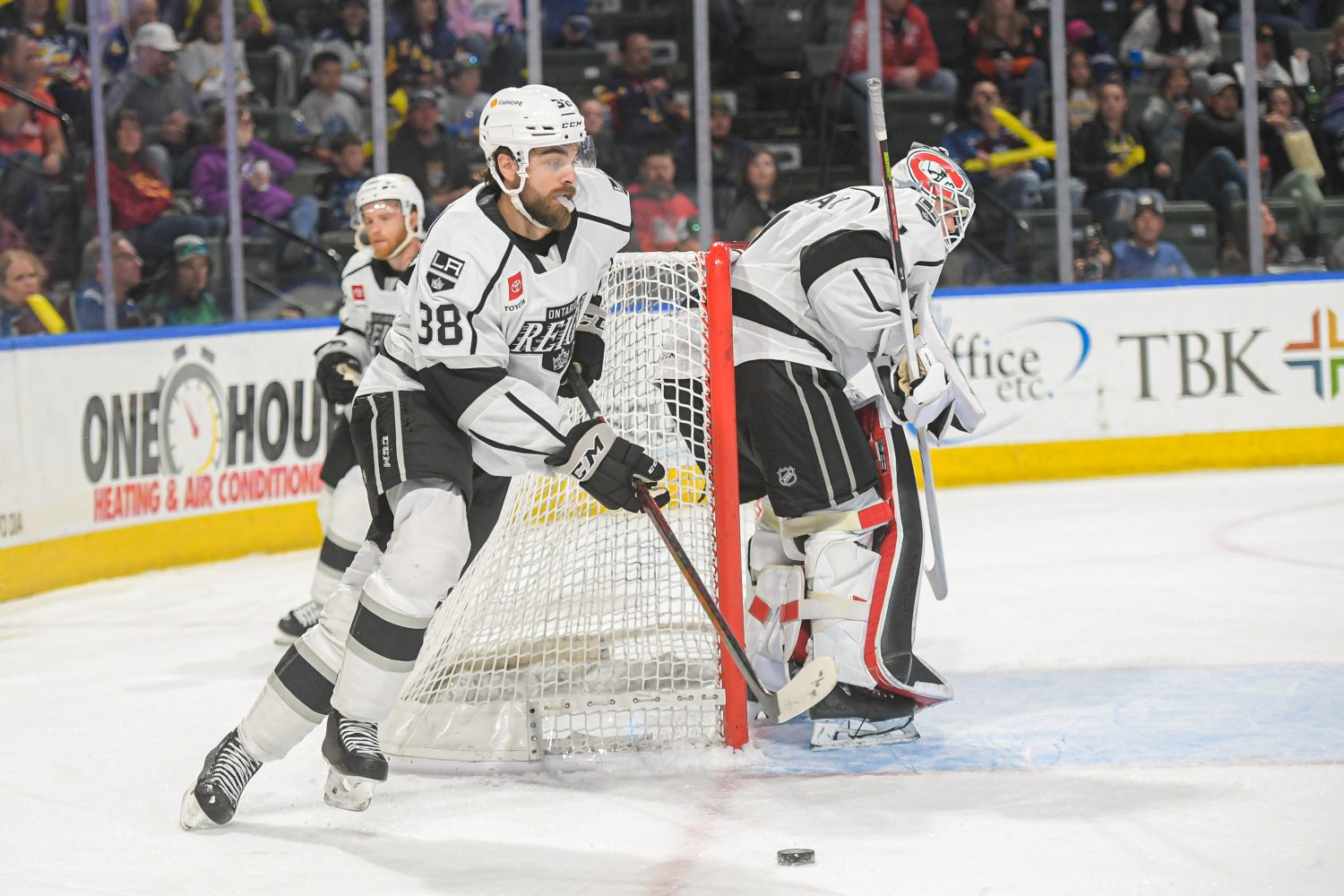 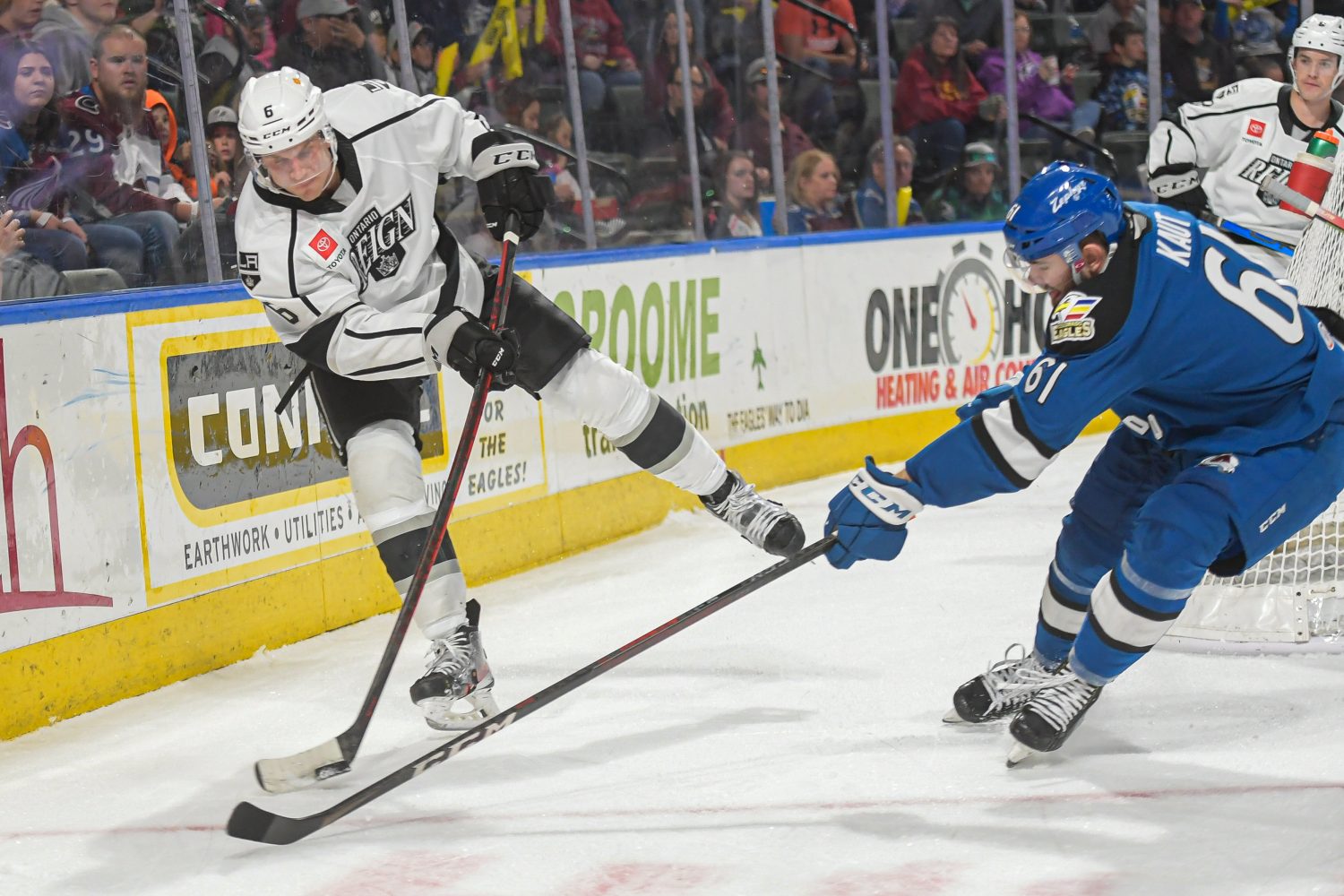 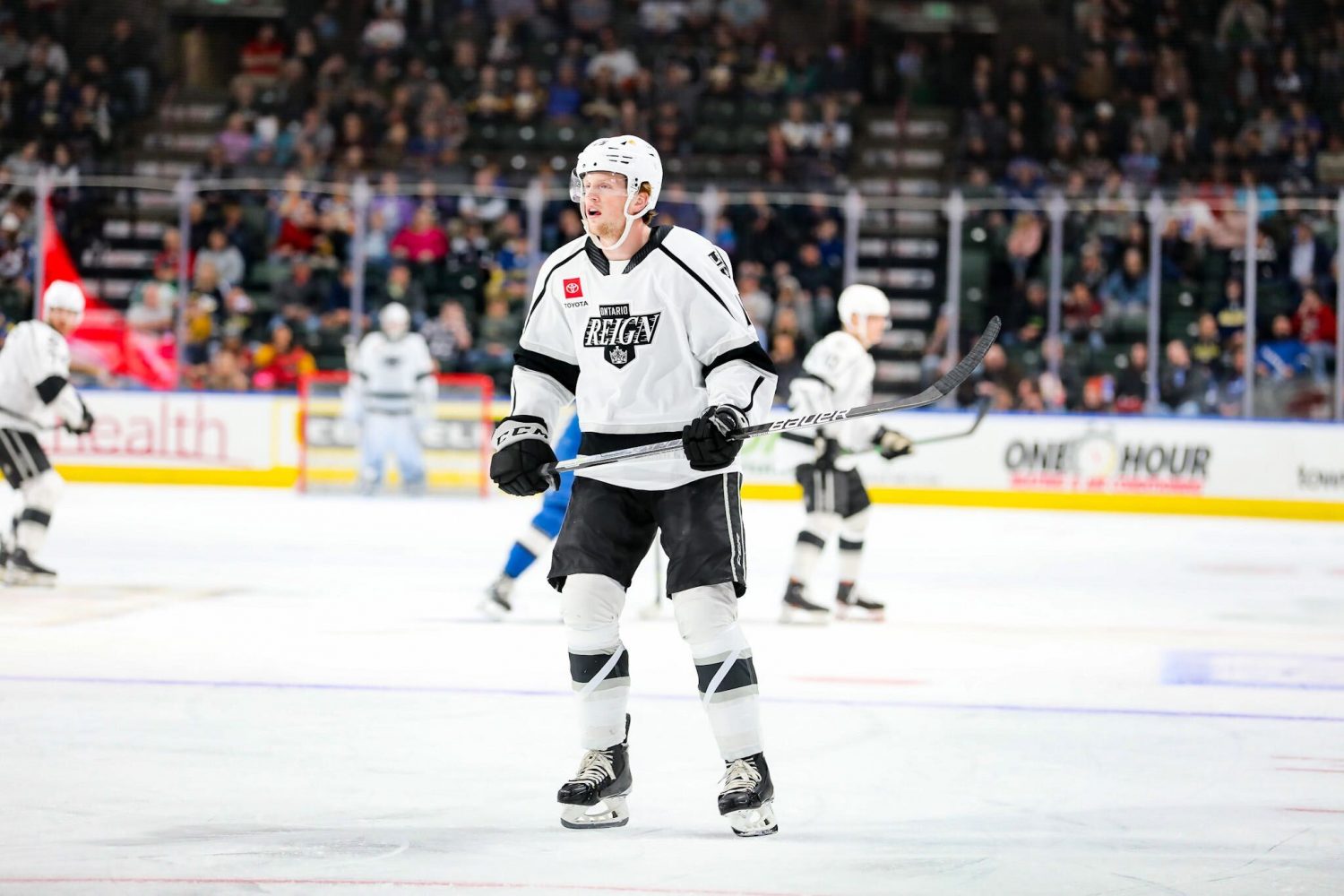 Good Morning, Insiders! A couple of AHL signings to announce this morning, as the Ontario Reign have inked defensemen Tyler Inamoto

By Zach Dooley
868 Comments
Looking to the Future