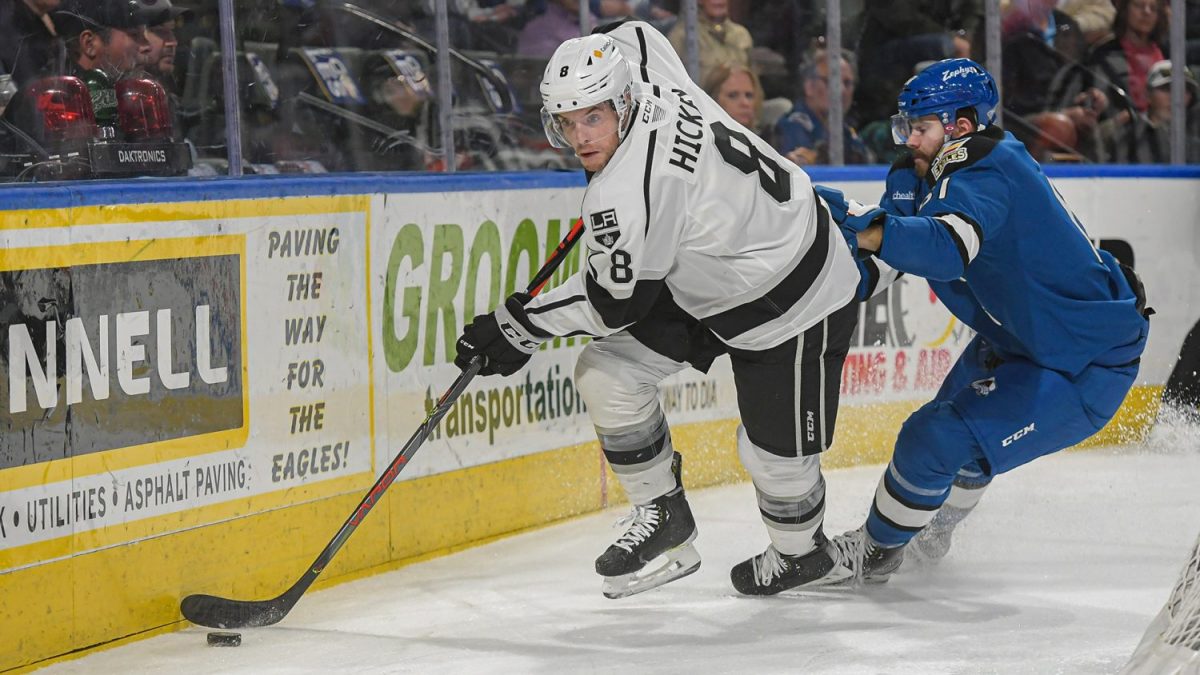 The Colorado Eagles took a 1-0 series lead over the Ontario Reign in the Pacific Division Semifinals of the Calder Cup Playoffs with a 10-1 win on Wednesday night in Game 1 at the Budweiser Events Center. The Eagles were led by their goaltender Justus Annunen, who stopped 34 shots in the contest, as well as three different skaters that each scored twice in Mikhail Maltsev, Keaton Middleton and Kiefer Sherwood.

Ontario’s lone goal came in the first period and was credited to captain Brett Sutter, which was the 10th tally of his AHL career in the Calder Cup Playoffs. The best-of-5 series will continue with Game 2 in Colorado on Friday night.

More from Reign Assistant Coach Chris Hajt and Sutter below –

The Eagles scored early and often in the first period, jumping out to a big lead in the opening 20 minutes. Middleton made it 1-0 with an unassisted goal at 2:17 before helping the extend the advantage with the second of back-to-back shorthanded goals in a span of 1:13. The other shorthanded tally came from Colorado forward Ryan Wagner.

After Middleton’s second goal at 5:32, Ontario made a change in goal, replacing Matt Villalta with David Hrenak. The Reign got on the board less than a minute later when Sutter deflected a shot by Nelson Nogier past Annunen to make it a 3-1 game. A second assist on the goal was also credited to forward Aidan Dudas.

But the Eagles quickly got back to their offensive game, scoring three more times before the end of the first frame. Two of the tallies came from Sherwood, while Stefan Matteau capped of the period with a power play goal at 16:13.

After Ontario returned Villalta in the net to begin the second period, Sherwood was given a major penalty for cross-checking at 3:10 which ended his night. The Reign were unable to take advantage of the lengthy man-advantage despite putting 10 shots on goal during the sequence. Annunen was at his best in the second, turning aside all 17 shots Ontario sent his way.

In the final five minutes of the middle period, the Eagles added wraparound goals by Alex Beaucage and Mikhail Maltsev to make it an 8-1 game at the second intermission.

Maltsev was at it again in the third, scoring his second of the night on the power play with a deflection at 6:40. Colorado’s Andreas Englund capped put the final tally of the night on the board at 14:00 of the third. His strike was the Eagles’ fourth power play goal of the contest, which saw them finish 4-for-6 on the man-advantage.

The two teams finished even with 35 shots on net apiece in the game. Villalta ended with 16 saves in just over 45 minutes of action, while Hrenak stopped nine shots during a 14 minute span during the first period.

Chris Hajt
On what didn’t go well in Game 1
First of all, anything that could go wrong, went wrong: the power play, penalty kill, five-on-five. It wasn’t the start we wanted. Game one goes to them and now we go back to practice tomorrow and work. We just need to be better for next game. We’re playing a team that’s a hell of a team. We knew that coming in and we’ll have to have a response, so we’ll regroup and have a good day tomorrow.

On correcting mistakes from the loss
We’ve got to look at all the facets of our game and how we can be better at five-on-five, special teams, and all those other aspects. Again, they’re a team that’s hungry and plays well in their own barn and we weren’t up to the challenge tonight.

Brett Sutter
On what the team needs after tonight’s loss
Accountability, first and foremost. We need more urgency in our game, more detail, and more accountability. They were the better team tonight. [We need to] have a short memory, get better tomorrow, and find a way to win on Friday.

On thinking about the loss as only one game
It is a series, for sure. We can come here and get the split still, but when you lose 10-1 you should walk out of this building embarrassed. It should sting like hell, and it does. Hopefully that will help us moving forward.

On rebounding from tonight’s loss
I think it’s less about what they’re doing and more about us now. We’ve got to get back to our game, our checking, and our detail. We have confidence in this group, and character in this group. We’ve showed it all year long. After a tough loss, we can rebound and come back and find a way. That’s what we’re going to do here.

Good Morning, Insiders! A couple of AHL signings to announce this morning, as the Ontario Reign have inked defensemen Tyler Inamoto

By Zach Dooley
868 Comments
Looking to the Future