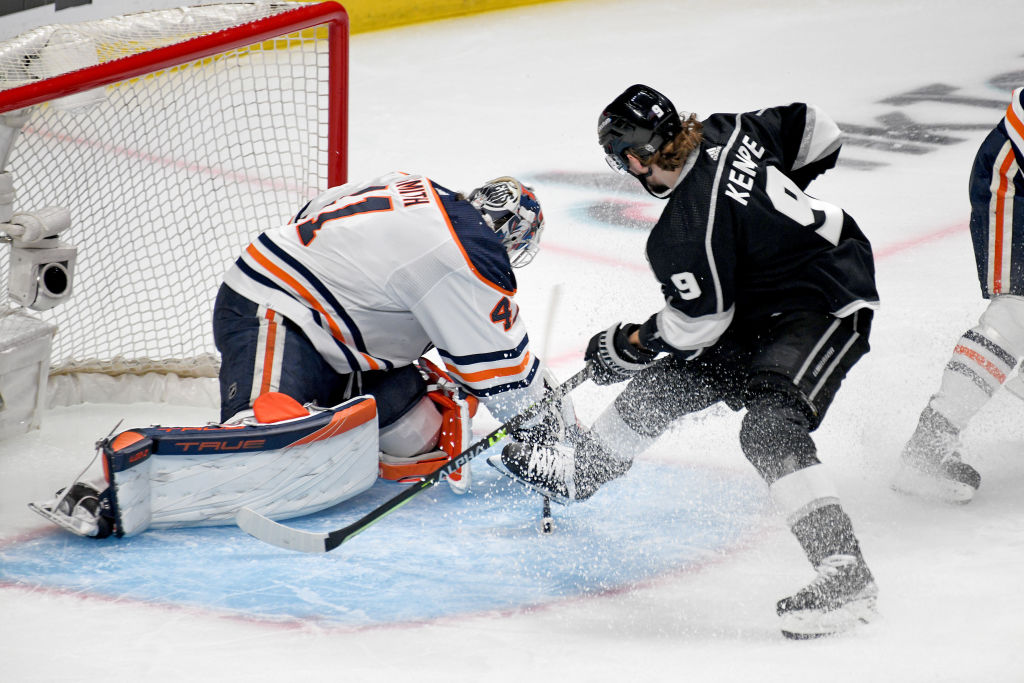 TONIGHT’S MATCHUP: The Kings and Oilers meet tonight for a pivotal Game 4 in their first-round postseason series. The Kings won a tightly contested Game 1, followed by a pair of blowout wins for Edmonton in Games 2 and 3, forcing a swing game tonight in Los Angeles.

HEAD-TO-HEAD: A pair of blowout defeats have created a few messy statlines for the Kings, but forward Phillip Danault had led the way with two goals, three points and a +2 rating through three games. Forward Trevor Moore is also a point-per-game, with three points (1-2-3) from three games played, while the defensive duo of Alex Edler and Matt Roy are both +1 on the series.

KINGS VITALS: It’s a good day to bounce back? Whether that is a new line or was it copy/pasted from Game 3, the Kings are in need of their biggest bounce-back performance of the season tonight in Game 4. The Kings have lost the last two games by a combined 14-2 margin, though in a playoff series, that math reduces to just 2-1.

No changes are expected in net, with Jonathan Quick as tonight’s projected starter in Game 4, as he has been in the first three games of the series. The veteran has seen his numbers balloon over Games 2 and 3, though he can hardly be placed at fault on most of the goals allowed. Quick is 1-2-0 in the series with a .859 save percentage and a 5.27 goals-against average, numbers that are naturally skewed by a small sample size.

The Kings held a full-team practice yesterday afternoon between Games 3 and 4, with the team choosing an optional morning skate today in El Segundo, as they have done for much of the season on days following a practice.

The Kings made two personnel moves between Games 2 and 3, one due to a coaches decision, a second due to injury. Forwards Rasmus Kupari and Gabe Vilardi entered the lineup in place of forwards Quinton Byfield and Carl Grundstrom, with the latter missing out on Game 3 due to injury.

Grundstrom is a game-time decision for tonight, while forward Viktor Arvidsson remains out, as he has been for the entire series to date. Todd McLellan said that the Kings are “potentially” contemplating additional lineup changes in advance of tonight’s game, but declined to share what those are or might be. With that in mind, here’s Game 3’s lineup and we’ll update as appropriate.

Things are unconfirmed due to the optional, and could be dependent on Grundstrom’s status for tonight. Should Grundstrom be able to go, and the Kings choose to deploy him, that shuffles things around.

Allowing just two goals over his last two games, goaltender Mike Smith is expected to make his fourth consecutive start of the series tonight in Los Angeles. Smith has rebounded strongly after Game 1, with 74 saves on 76 shots combined in Games 2 and 3. Throughout the series as a whole, Smith is 2-1-0 with a .946 save percentage and a 2.02 goals-against average.

Coming off of consecutive victories in Games 2 and 3, Edmonton is not expected to make any lineup changes entering tonight’s Game 4. Per Tony Brar of Oilers TV, here is Edmonton’s projected lineup for this evening –

As expected, no changes for Woodcroft for Game 4.

The Oilers made an adjustment between Games 1 and 2, switching from an 11-7 alignment to a 12-6 alignment, with forward Josh Archibald checking in for defenseman Kris Russell. Off of two wins, tonight appears set for three consecutive games in that look.

Don’t Be In Between
“That’s knowing who you are as a player, knowing the time and the situation. You know that 97 and 29 are pretty good players and you have to pick and choose your spots. We haven’t done that, even when the game has been close, we haven’t done an exceptional job with that. When I say we have to get back to our game, our game is also making decisions that are precise and instant, not in between. If you’re playing in between against that team, you’re done.”

Loved this quote from Todd McLellan and I’m going to let it stand alone here. The question asked was about the balance between being patient and being too cautious. McLellan hit the nail on the head. Don’t be in between. Ties in well to the next section here below……

Playing Kings Hockey, In All Situations
There have certainly been challenges for the Kings over the last two games, but perhaps the biggest has been sticking to their game when conceding the first goal.

In Game 1, the Kings never trailed, scoring the game’s first two goals and never conceding beyond a tie. Game 2 saw a scoreless first period, but two goals on special teams opened up a 2-0 Edmonton lead early in the second. In Game 3, it was again two goals not at 5-on-5 that put the Oilers ahead. In Game 1, the Kings stuck to their identity throughout the game, but in Games 2 and 3, they got away from it when Edmonton took a two-goal lead.

They started chasing the game at that point, looking for goals, and that turned both games into nights when the teams tried to trade chances. You saw the outcome. That style of hockey plays into Edmonton’s hands, not LA’s, and regardless of which team scores first, it’s imperative that the Kings stick to their style of hockey in tonight’s Game 4.

“That is the challenge, when they get ahead, and we play the way we did, we’re more susceptible to getting away from what we do,” Todd McLellan said this morning. “As soon as we open it up, guess who that favors? That’s happened a couple of times in the last couple of games and the game gets away on you. I know we’re not scoring 7 or 9 tonight, that’s not our number. Regardless of what they do, we have to stick to our game.”

From the coaches to the players, the Kings have noticed the same thing.

Take Game 3 for example. The Kings were actually pretty happy with their play in the first period, but found themselves down by two goals, which was frustrating. Two goals is surmountable – the Kings were tied for second in the NHL with six two-goal comeback wins this season – but for a team that does not run and gun, it has to be done methodically, it can’t be a trading chances style of hockey. Leave the horse races to yesterday’s Kentucky Derby and play a Kings style of hockey game tonight.

Anderson – You can get roped into it, the way they like to play, they take more chances than we do. When things aren’t going great, it’s easy to get derailed from it, but obviously we’ve done a good job all year, when we’ve been down, of finding a way to claw back and doing it within our structure. That’s something we want to get back to if we go down a goal or two, look at what we’ve done the whole year, in the games we’ve come back from, and emulate that again.

Kempe – Yeah, it’s hard, when you’re a couple of goals back, you want to score and maybe you try to think too much offense sometimes and especially against those guys, it’s hard because they’re good in transition. Still, I think in the first and second periods, we battled back, but we didn’t get the goals we wanted to and they kept tapping us when they had the chances. As long as we stick to our game plan, I feel that we have the chance. We just kept falling into that trap, playing North-South all the time and that’s what they want, that’s not really our team game.

That’s the power play chart through three games of this series. Not included are a 4-on-5 goal and a 4-on-4 goal for the Oilers, with the special teams count sitting at 7-1 in favor of Edmonton through the three games.

The most recent power-play goal, however, came from the Kings. They got on the board late in the second period, cutting a 5-1 deficit to 5-2, as Phillip Danault scored off a rebound in front, opening the account for the series. Perhaps, there can be some carryover stemming from it.

“I hope it can, because our power play had obviously been ineffective in the first two games,” McLellan said this morning. “We had a little more substance to our power play in Game 3 and it should give us a little bit of confidence, certainly.”

It has not been a strength for the Kings all season, that much is certain, but it was a small step in the right direction in getting back even to the regular-season average.

It was a simple type of play, a faceoff win, a pass, a shot and a rebound from the dirty areas, but for a struggling unit, that really doesn’t matter. There’s hope that play can spur on some confidence from that unit as we progress into Game 4, with the unit showing some signs of life in the Game 3 defeat.

“That’s how that one worked, but it’s not always how they work, though I thought there were some improvements to our power play last night,” McLellan added. “We don’t need to operate at 28 percent, that would be ideal, but if we can get to our yearly average, which wasn’t good enough during the year, but if we can get to that, we’ll be okay. Getting a goal was a step in the right direction.”

Speaking with Adrian Kempe, who accounted for the “shot” element of the “faceoff win, pass, shoot, rebound” chain of events, he’s hopeful that finding the back of the net in Game 3 can help to spur on a struggling unit from a confidence perspective.

He said that element of the game helped to provide a bit of a good feeling amongst the unit and that familiarity throughout the series can only help a group that is operating at 1-of-12.

“Yeah, it helped with our confidence on the power play at least, we felt good about ourselves [after that one]. If you look at them and you look at us, there are still some things that we can improve but that was a step in the right direction. It felt like we started to figure them out a little bit more and hopefully that can help us tonight.”

Kings and Oilers, tonight at 7 PM. Kings can even the series at 2 with a win, but would be facing elimination with a loss.