Reign Round 1, Game 2 Preview – Down But Not Out + The Real Deal Akil, Elimination Game, Rapid Recap 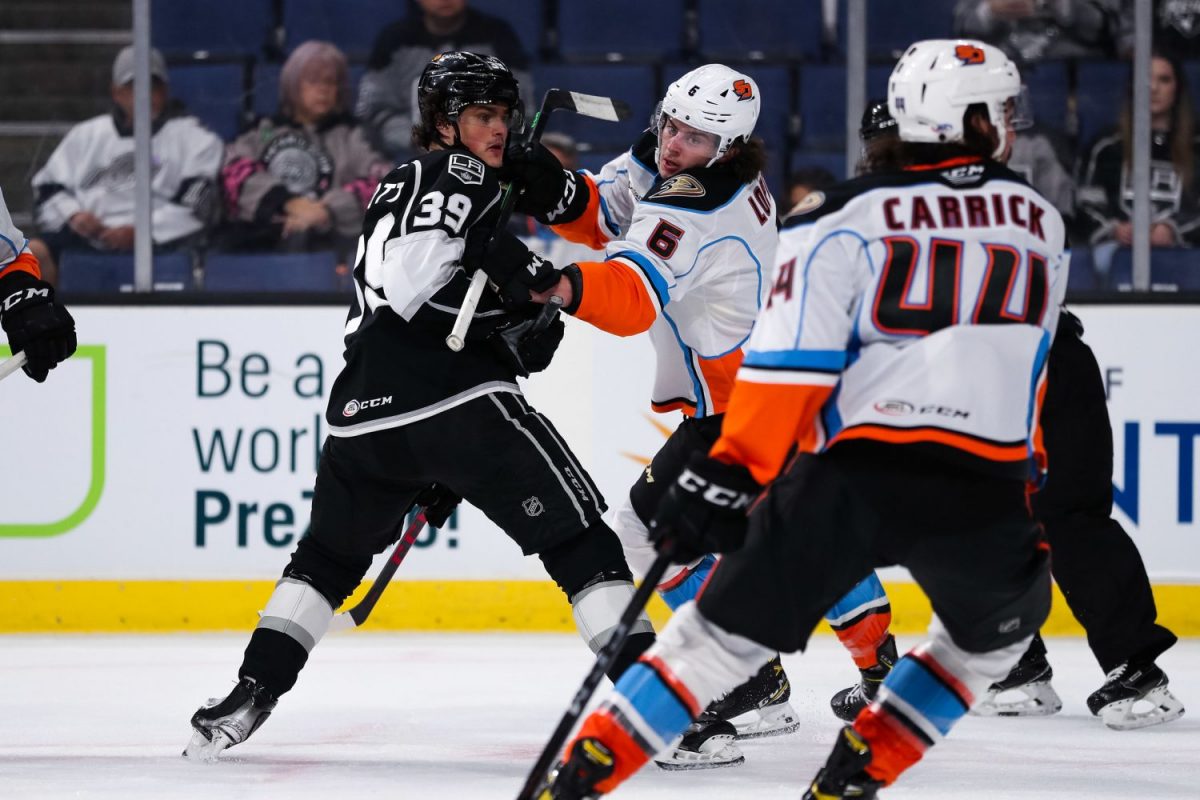 TONIGHT’S MATCHUP: The Reign face the San Diego Gulls in Game 2 of their best-of-3 Pacific Division First Round series to begin the Calder Cup Playoffs. Ontario leads the series 1-0 after a 7-4 win in Game 1 of the postseason on Wednesday night.

HEAD-TO-HEAD: Ontario got two goals from both Samuel Fagemo and Akil Thomas to dig themselves out of an early deficit and prevail in Game 1. 11 skaters registered points in the victory, including a game-high three points for Vladimir Tkachev, who scored a goal and two assists. Both Alex Turcotte and Christian Wolanin each also had two assists apiece.

REIGN VITALS: It’s one thing to come from behind in a playoff game, but it’s another to end a rival’s season. That’s what the Reign will aim to do tonight, with San Diego on the brink of elimination.

Goaltender Matt Villalta got the start in Game 1 and rebounded after allowing two early goals, making 22 saves to secure a win over the Gulls. It was the first postseason victory of his pro career, having lost his only other appearance in last year’s one-game series to the Colorado Eagles. Ontario’s coaching staff has shown confidence in their starting netminder all season, and it’s expected that Villalta will once again get the start in Game 2 tonight.

It was a very slim group on the ice this morning for an optional skate, so it’s not clear at this time if there will be any lineup changes. After the group scored seven goals and rallied together to pull out a win, any changes would most likely only come due to an injury.

For reference, here’s how the Reign lined up in Game 1, with no obvious signs either last night or today pointing to any changes for tonight’s Game 2 –

GULLS VITALS: As stated above, it’s do or die time for San Diego tonight, and they’ll throw everything they have at Ontario to keep their season alive. The team had four different goal scorers in Game 1, with young forwards Josh Lopina and Alex Limoges finding the back of the net along with Hunter Drew and Trevor Carrick.

For reference, here’s how the Gulls lined up in Game 1 –

After a loss in the opening game and everything to play for tonight, there’s a good chance San Diego changes some things up for tonight, with the most likely switch happening in goal. Lukas Dostal played the first 47:40 before Olle Eriksson Ek came in for relief after the starter had allowed six goals on 28 shots. Eriksson Ek finished a perfect 10/10 in 11:07 of the third period and was the better netminder against the Reign during the regular season, earning all three of the Gulls’ wins over Ontario, including his only shutout of the season, a 22-stop clean slate in San Diego on March 12.

Down, But Not Out
Everyone inside Toyota Arena was stunned, not only when San Diego scored 11 seconds into the first shift of the game, but again on Drew’s goal that doubled the lead to 2-0 at 7:47. But there was still a long way to go and the Reign were able to settle down, play their game and work their way back, eventually earning themselves a 3-2 lead at the end of the opening period.

Fagemo led the way on the ice, ripping a shot past Dostal at 10:26 that got Ontario on the board and turn the momentum back in the home team’s favor by making it a one-goal game.

“I was just trying to shoot the puck on the net and use the defense as a screen there,” Fagemo said after the game. “I think it was a good drop pass from Vladdy too. It was fun to see the puck go in.”

Falling behind and coming back wasn’t a new experience for the Reign at home, they found themselves in that situation multiple times during the regular season. Those experiences, along with the confidence in themselves helped keep the group level-headed at a critical time. In this type of a playoff format with a short opening round series, one loss would have had the team on the ropes.

“It was a pretty tough start there,” Fagemo said. “We let one in on the first shift, then let one in later as well, so a 2-0 lead to the Gulls is pretty tough but I think we have good confidence in the group and stayed patient. We just played with confidence.”

Less than three minutes after Fagemo’s goal Martin Frk was called for tripping, and the Reign penalty killers further helped steer the momentum away from the Gulls. Ontario kept the San Diego power play quiet during the first minute of the man-advantage, barely allowing any offensive zone time or a chance to set up a play. Then Austin Wagner, playing aggressively at the offensive blueline on the forecheck, deflected and stole a pass to open up a breakaway chance for himself and he didn’t miss his shot, tying the game at 2-2. The rest, as they say, was history.

We call this bad boy – Wags the shorty guy – still workshopping it though pic.twitter.com/eFFBvOmofZ

“We talked about going into playoffs and the up and downs and ebbs and flows of playoff hockey,” said Reign Assistant Coach Chris Hajt. “You never want to get too high or too low. The bench was saying all the right things. The guys stepped it up and we were able to come out of the period better than how we started. We just stuck with it and got some key goals and that’s playoff hockey.”

No Doubt, He’s The Real Deal
Akil Thomas left his mark on Game 1 both on and off the scoresheet. Early in the game, his line, which included Wagner and Taylor Ward, had a big hand in turning the team’s momentum around with hard work and physical play. Then in the third period Thomas broke through, scoring at 5:32 off a drop pass by Ward up high in the offensive zone before adding a shorthanded empty-net goal while the Reign were killing a penalty to Jaret Anderson-Dolan in the final two minutes.

His first goal, which was the second of his AHL playoff career, turned out to be the game-winner, giving Ontario insurance after Carrick had cut it back to a one-goal game for San Diego at 3:18.

“I’m glad I got the puck,” Thomas said while discussing his first strike after the game. “I knew I didn’t have too much time to shoot it so I just ripped it and was hoping for the best. It went in and it felt good.”

Multiple injuries kept Thomas out of the lineup at the beginning of the season, first taking time to rehab a shoulder injury sustained last year before returning in December and blocking a shot in his second game back. It wasn’t until late January when he was finally healthy and could get back to playing every night. But it took awhile for his offensive game to get going, he was held off the scoresheet in his first eight games back until he produced his first assist on Feb. 11 in Stockton. Then it was another eight games before his second helper, which came almost a month later on Mar. 5. Finally, in San Diego on Mar. 26, Thomas found the back of the net during a power play chance. It was the first of six power play goals he produced down the stretch and the Toronto native ended the regular season with six points in his final five games.

“I tried to believe that it was coming,” Thomas said after Wednesday’s win. “Obviously it was really tough during that stretch. I was trying to find it and was frustrated, but with that time I missed it kind of just needed to happen. Right now I’m just happy that I’ve found my stride and I’m not thinking about the first 20 games anymore. I’m just focused on the moment and my opportunity going forward. It’s a new season for me.”

Helping Thomas to turn the page has been Ontario’s coaching staff, which has continued to put him in spots to succeed. While he wasn’t always making a difference on the scoresheet earlier in the season, Thomas was still going out to take key face-offs and used in an important role as a forward on the team’s penalty kill.

Now he serves as a good example to others on the team who may be in a slump offensively, showing that hard work and perseverance can pay off.

“It’s kind of like the game tonight, he just stuck with it,” Hajt said of Thomas’s play. “He puts so much time, effort, and work into his game. He takes his craft seriously and he’s always doing extra and taking care of his body. He’s doing so many things right with wanting the puck, making plays, and being a responsible 200-foot player. He works on his shot all the time too, so we’re happy for him.”

Elimination Game
After a rollercoaster Game 1, the two teams must quickly refocus to prepare for another battle on Thursday night, less than 24 hours after the first one ended. Two games in a short span aren’t anything new for teams in the AHL, as they see short series’ all the time. But now that it’s the playoffs and the season is on the line, the intensity will be ramped up.

Either Ontario finds a way to win Thursday and advance, or San Diego will even the series and force a winner-take-all Game 3 at Toyota Arena on Monday night. That’s a lot of pressure on both teams.

“We just have to keep it simple and patient,” Fagemo said. “Just have fun with it, stick to our game plan, and shoot the puck on net.”

Hajt didn’t give away any of his team’s game plan on Wednesday when asked if there was anything he’d like to change going into Game 2, emphasizing the need to stay focused and be prepared.

“We’ll watch the video and make any necessary adjustments we need to make. At the end of the season we had a couple three-game series, one against San Diego and one against Colorado, where we treated it as a three-game [playoff]. We know that they’ll come out and be desperate and we need to make sure we’re on our game.”

Reign Check Rapid Recap
For more on what happened in Game 1 and a look ahead to tonight’s Game 2, check out The Reign Check Podcast Rapid Recap with myself and broadcaster Josh Schaefer. We’ll continue providing audio updates there throughout the postseason.

If you can’t get to Ontario tonight for Game 2, it’s available to stream live on AHLTV and live audio can be heard on the team’s Mixlr channel. 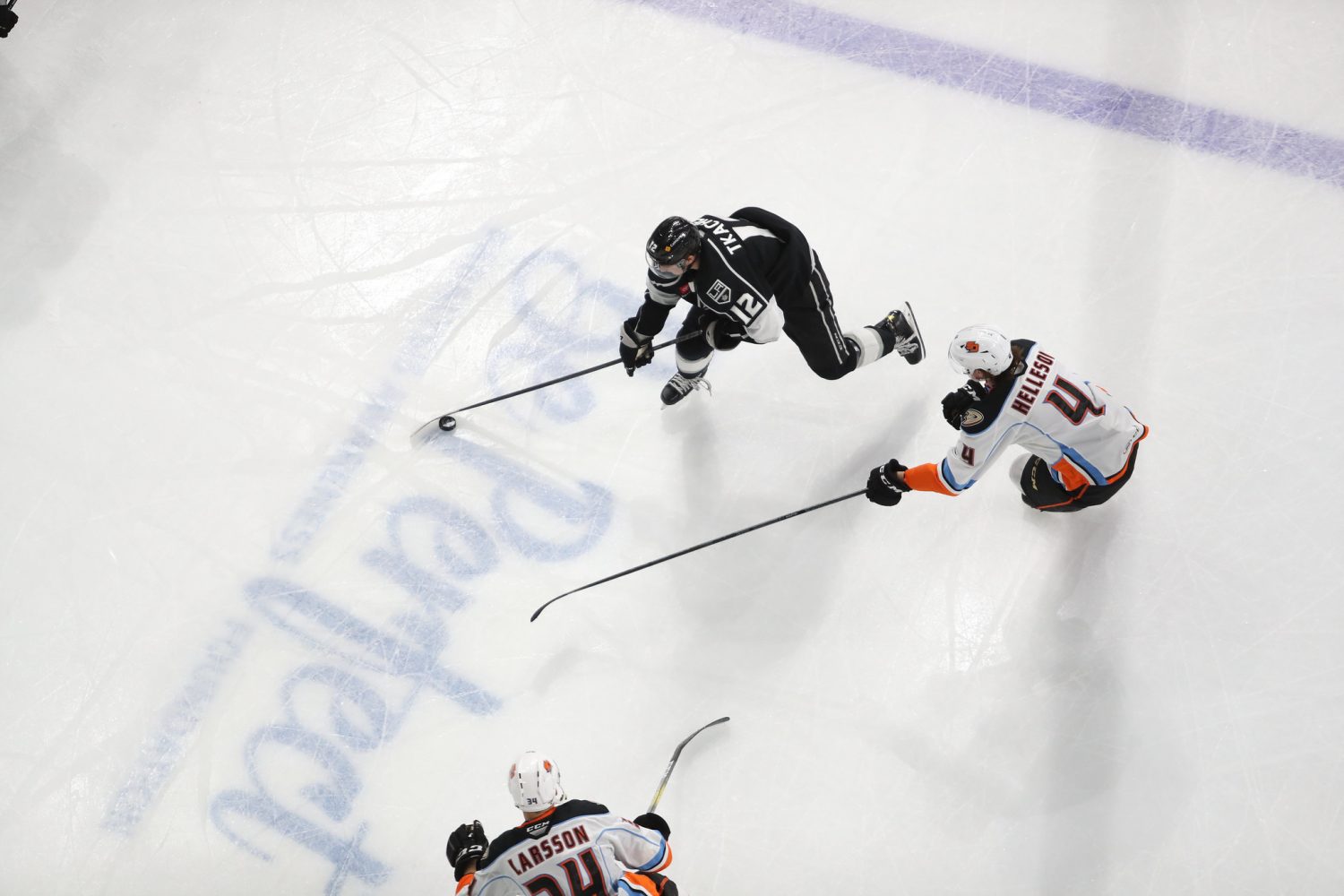 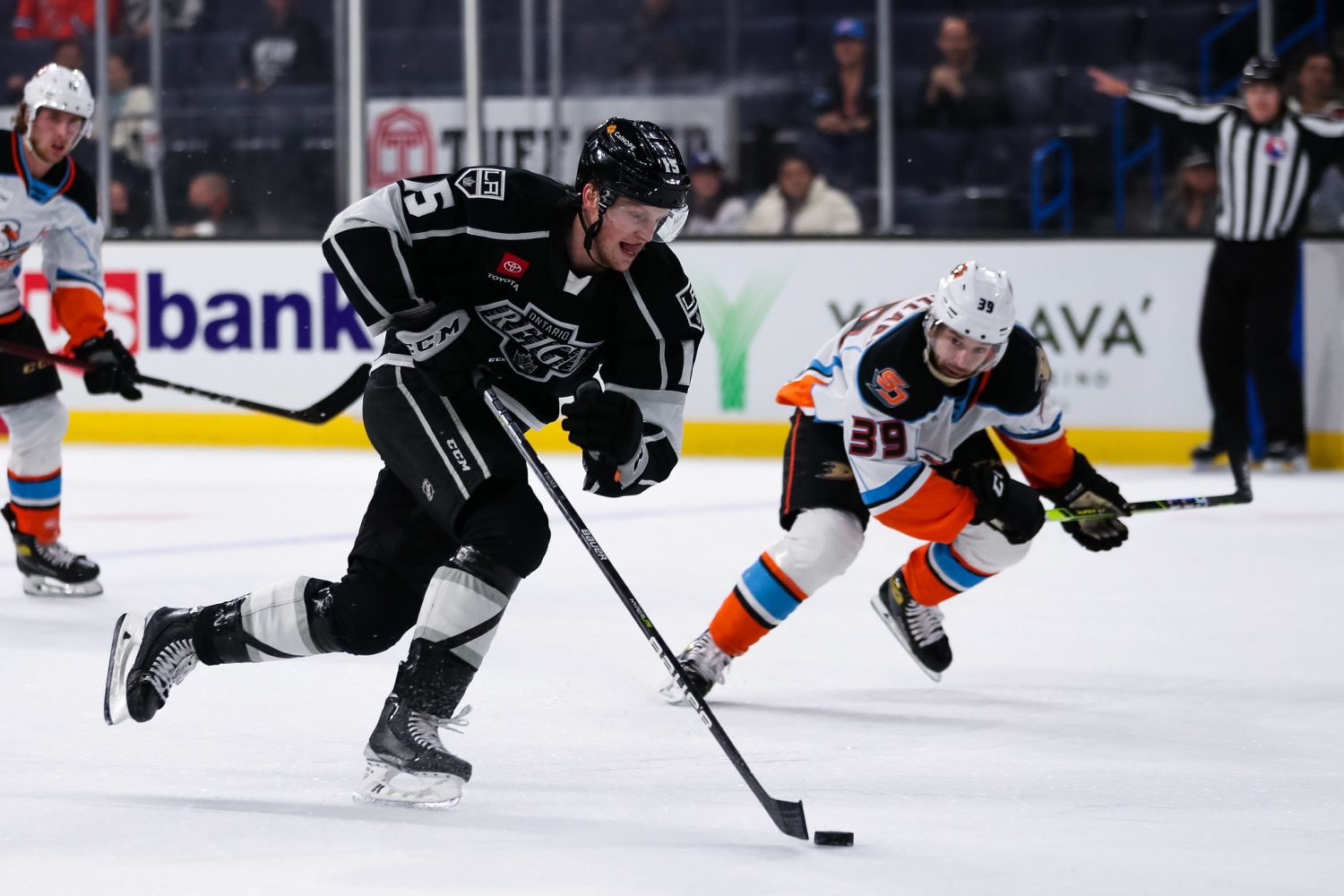 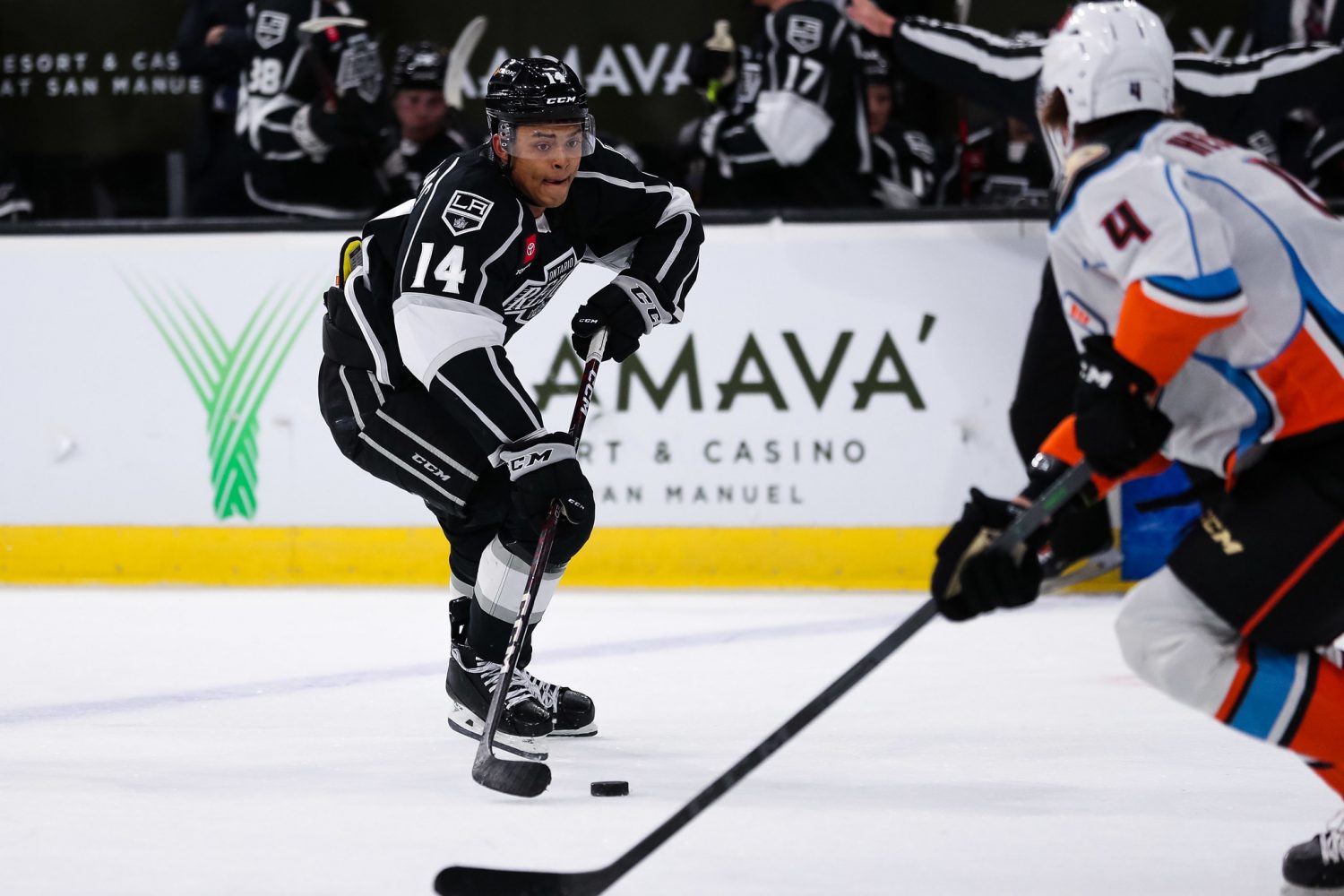