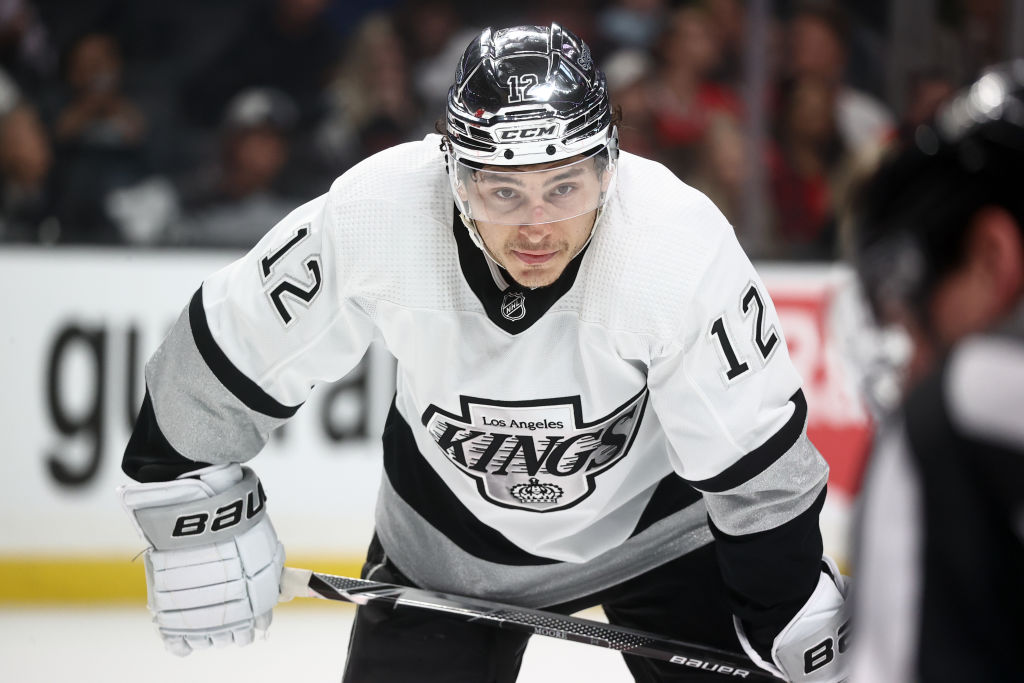 The Kings hit the ice this morning for a full-team skate in El Segundo, in advance of tomorrow’s Pacific Division showdown against Edmonton.

The Kings gave several of their higher-minute players the day off from practice yesterday, with others getting some time on the ice, as needed. Today saw each of the healthy players on the ice, along with the trio of Dustin Brown, Brendan Lemieux and Matt Roy, who have now joined the full group on three consecutive days. Additionally, forward Andreas Athanasiou was on the ice today in a non-contact red jersey.

The nine defensemen rotated during drills, giving us less than an affirming look at potential pairings, however we saw this approach at least during one set of drills.

Likely more of a confirmed look at tomorrow’s lineup to follow during morning skate.

“We could gain and lose some, the way it’s going,” Todd McLellan said, when asked about tomorrow’s lineup. “We’ll probably have to make one decision, some decisions will be made for us as far as bumps and bruises.”

Some interesting decisions certainly do lie ahead. The Kings will, eventually, need to decide who’s in and who’s out at both forward and defense, and after that, they’ll need to decide who plays in what role. Defensemen Mikey Anderson and Drew Doughty, along with forward Blake Lizotte, still remain out of action, though the importance of all three certainly impacts the conversation when they get closer to a return.

A Full Team Practice (!)
It has been a minute.

The last time the Kings had a true, full-team practice may have been trade deadline day on March 21. Now, the entire group has been on the ice for practices between now and then, but there’s a difference between just a practice that everyone is in attendance for and a real practice.

“It’s probably been 10 days, right around the trade deadline,” Todd McLellan said today. “We played eight games in 13 days, there’s not going to be a full practice in that segment. Yesterday was a good practice for half the team, low-minute and injured guys, today was a good, team practice.”

Today, the Kings held the latter – a REAL practice – with an on-ice focus point in preparing for certain details surrounding the Edmonton game tomorrow, as well as a fresh look at special teams. More on that below.

“The nice thing was a full practice today, we haven’t had that in a long time, a good 40 minutes of full-team work,” McLellan said. “Our group needed it, hopefully it pays off, but looking at the schedule, we’re not going to have many of them left, so take advantage of it when we can. It was good that way.”

For today though, it was good to get everyone together for a full-team skate, with McLellan sharing that the team was able to implement a few Edmonton-specific things into today’s skate, taking video learning into practice. Trevor Moore talked about how well Edmonton uses the net in the offensive zone, possessing the puck below the goal line and getting bodies to the front.

While the schedule moving forward is lighter, which could allow for additional opportunities, there’s also the balance between practice time and rest time. We saw what rest can do – the game in Winnipeg as an example – but we also saw what a game after a rest day gone the wrong way can look like, aka the 6-1 loss against Seattle.

Regardless, days like today will be cherished by the players and coaches for their importance headed forward.

“It’s nice, it feels like a week honestly,” Trevor Moore said today. “It was a good refresher, getting our legs back under us, it’s been pretty busy. It’s important to get the rest and then we’re able to watch more video about us, and some more structural stuff that will help us here.”

Special Teams Reps
It hasn’t always been noticeable, but the numbers would show a large-scale improvement on special teams over the last slate of games.

The Kings are 20-of-21 on the penalty kill in that span, and they’ve scored a power-play goal in six of eight games.

“The penalty kill is improving, the power play had a little spike and now it’s back somewhat and it needs to get better,” McLellan said today.

Looking specifically at the penalty kill, both McLellan and Moore have seen certain areas of that part of the game improve and perhaps more importantly, become more consistent and familiar. Things like communication, both verbal and visual, as well as comfort and adjustment with pairings has gone a long way.

Moore – A little while back we tried to get more aggressive, but we’ve been trying to be more talkative out there and help each other out. Guys are moving so much, these power plays are so good, you can have someone else be your eyes for you and it helps things out that way.

McLellan – Our partners, especially up front, have become a lot more common over the last two months, unless one of them is in the penalty box. The starting pair used to be Kopi and Al, that’s changed a little bit, it’s allowed them to be fresher later on. Communication happens, we think it’s just verbal, but it’s also anticipating and reading where the puck might go next, being predictable on the penalty kill, and also body language or giving visual cues to whoever is on the ice. If Mooresy is talking about that and he feels it’s improved, that’s a good sign for us.

On the power play, Moore felt that today’s practice was a good one to give those units some reps. One of the things you don’t get a ton of reps for, when the team isn’t practicing a ton, is the power play.

An interesting point brought up was by Kings radio analyst Daryl Evans, who wondered if on a team with a team like the Kings where much of the personnel is the same between the power play and the penalty kill, can you learn from one area to help the other. Moore agreed with the notion, and perhaps put the onus on he and his teammates to see how they can integrate it. Here was McLellan’s take –

“It should help you, because you get a sense of what it feels like to be in a comfortable or uncomfortable situation. When you’re penalty killing, you’re trying to put the opposition in an uncomfortable spot, where they have to make quick decisions and low-percentage decisions. When you’re on the power play, you’re doing the opposite. You would think that the transfer of feel, if that’s the best word, would go from one to the other, but we’re still fighting that.”

Tradin’ Jabs w/ Peters
Lastly, Insiders, a conversation with Chris Peters, who joined the Tradin’ Jabs program today to discuss the plethora of young players currently playing with the LA Kings, and those on their way sometime soon.

An in-depth look below –

More to come, Insiders, as we get prepared for Edmonton tomorrow. Today’s skate, as noted, was Oilers-centric, and a huge two points are on the line with very little help coming the Kings way via yesterday’s games. Go Canucks. Talk soon!