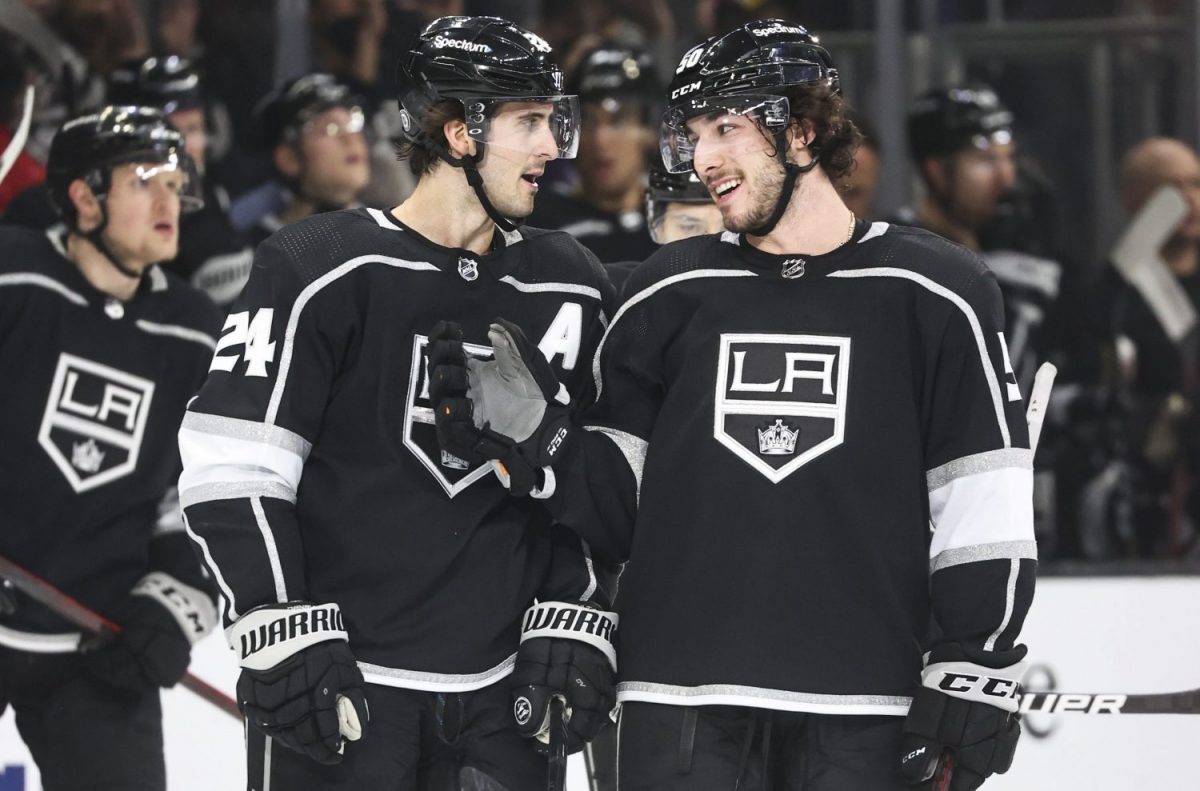 The Kings hit the ice today for a short team practice, in between games against Chicago yesterday and Seattle tomorrow. Today’s skate was a (mostly) full-team practice, but not a particularly long practice, with the Kings in the midst of a heavy, every other day schedule.

Here’s how the Kings lined up today, as the team skated for around 20 minutes –

On that group, the absence of Anze Kopitar is obviously noticeable. Kopitar missed today’s skate with a maintenance day, per Todd McLellan, without cause for concern there.

Tobias Bjornfot skated today in full and is “getting close” to returning to the lineup, per McLellan. We could potentially see Bjornfot as a lineup option as soon as tomorrow’s game against Seattle, with an evaluation set to take place after today’s practice. Brendan Lemieux’s participation was in full today, in a regular contact jersey, for the first time since he returned to practice earlier in the week.

The timeline originally spelled out for us by General Manager Rob Blake had Viktor Arvidsson the closest to a return, followed closely by Bjornfot with Lemieux a bit behind. That timeline, so far, has played out as expected. Arvidsson returned to action last night, tallying an assist as he works his way back to full form, with Bjornfot following potentially as soon as tomorrow. Lemieux’s transition from a red jersey to a white jersey is a great sign for him as well.

Will see what tomorrow brings when it comes to the status of the latter two.

Defensive Deployment
The Kings are approaching a point where they will have a number of different options on the blueline.

The team currently has seven healthy defensemen, with Bjornfot’s return appearing imminent, which would bring that group to eight.

“He had a good skate today, he’ll be evaluated after practice, once he gets off,” McLellan said. “I think that we’re getting close to adding another body into the lineup.”

What that does for the Kings – and you can see it by the pairings above – is provide four pairings of healthy defensemen that are trusted at the NHL level on any given night. Now, there’s no indication that the pairings above are ones that will for sure be used tomorrow, and there’s no indication from those pairings which two defensemen might sit out. Hard to put up a ton of case against any of them individually, especially when compared against the others.

And that’s kind of the point.

With the usual top pairing of Drew Doughty and Mikey Anderson sidelined, and usual number-three defenseman Matt Roy out as well, there hasn’t been that usual hierarchy on the backend. It’s not pairings 1, 2 and 3, it’s just three pairings.

“We may go into a certain game, thinking that a certain pair is going to play a certain role and maybe it’s not going well for them and that switches,” McLellan said. “It’s just the way we’ve had to react. For the most part, all of the kids and the few veterans that we have, they’ve done a pretty outstanding job to this point and they’re going to have to continue to do that.”

Volume of special teams, style of play, A games versus B games, etc, etc. Different situations and circumstances have led to different players leading on different nights. A storyline to follow heading into tomorrow’s game against Seattle.

Phileadership
I think it says a lot about a player to come in after a one-goal loss and, unprompted, take ownership for a goal allowed.

That was Phillip Danault after last night’s overtime defeat, calling the third goal his responsibility, with his man putting the puck in the net. Todd McLellan attributed the breakdown to communication between Danault and young defenseman Jordan Spence, but the veteran took responsibility when speaking to media.

“I think, first of all, when individuals do that, they’re confident,” Todd McLellan said today. “They’re willing to put themselves out there and say ‘hey, that one is on me,’ I’m going to fix it and it’s not going to happen again. Sometimes, when individuals beat around the bush, they don’t really want to own it and some of it is confidence and where you are in your game. So one, Phil is confident, he feels good and he should. Two, taking the pressure off of others, a real good sign of leadership. Three, he made amends, I thought, when he produced to at least get us a single point with two big goals.”

Defenseman Sean Durzi spoke highly of Danault’s impact the other day from a leadership department. Durzi called Danault a player who has helped him work through the grind of his first NHL season. The two players have become close here, driving to games together on most nights at home, with Danault labeling Durzi as an awesome player and a “huge” part of the team.

Durzi returned the favor this morning, speaking on the impact that a guy like Danault has on younger players here.

“Phil is a spectacular person and I can’t preach it enough how much he means to this team, not only on the ice but he’s been a great leader all year,” Durzi said today. “I think we realize how much of a big role he was for that Montreal team last year, and maybe he wasn’t on the scoresheet every night like he is now, but he does a lot for us that a lot of people don’t see, they don’t get to see what he does. He’s always underneath pucks, he’s always supporting, he’s always talking, he’s talking to guys off the ice and he’s a positive influence in the room. Can’t say enough about Phil. Great player and he’s using his experience to help drive our team.”

Adding another strong leader in Danault, to the already strong group of leaders in the room here with the Kings, has been the perfect fit. Can’t have enough of those types of players, and it’s clear that Danault has fit in that way.

Durzi Quotes
Lastly, hear from defenseman Sean Durzi from earlier today. Durzi matched a franchise record with three assists last night, tying the single-game mark for rookie defensemen. Hear from the impressive rookie on a number of topics, including his points last night, being encouraged by the coaching staff to play his game and learn from mistakes,

On the uniqueness of this coaching staff encouraging players to take a risk to make a play
It’s definitely unique and I think for my playing type and how I came into the league, it’s helped me. A lot of people would say my first game was a big splash, a goal and an assist, but I think I made more mistakes in that game than I have the rest of the way up here. I think them accepting that there’s both sides of it, realizing the game happens quick and there’s going to be mistakes, it’s just not letting those mistakes occur more than once and learning from them. I think they do a really good job of it. It’s time to take the diapers off in this stretch, it’s playoff race and we need to step up, but in the beginning, it was hey, learn from this and be better from it, don’t let it hurt the way you play and your confidence.

On getting points as a byproduct of doing the right things
I think [the staff] has been big on me taking care of my own end and letting the rest come. That was my transition to pro, the biggest thing I had to learn and with the increased role I have right now, it’s definitely nice to help the team in that way. You want to be solid on the other side of the puck and allow myself to take over naturally on that side of it, but focusing on what I can do without the puck, so that when I get it, I can do what I do.

On transitioning to being a part of the group as a rookie player
A big part for me, throughout my career, is finding that comfort space within your teammates. I think, when you’re friends with your teammates, it’s a lot easier to play. You come in, you’re a young guy, you don’t want to step on anyone’s toes, you don’t talk, you work hard, just trying to find you way through the team and where you fit in. As I’ve come along here, you get to know the guys, know their families, hang out a bit away from the rink, hang out with them on the road and you become friends and that’s made it easier for myself to play hockey and be confident out there. Confidence is a big part of my game, competitive and confidence kind of drive my play and I think being friends with these guys allows me to be confident enough to make a mistake and they’ve got your back. That has really helped, I’d say. Down the stretch, you want to fight for your teammates, fight with your teammates and fight with your friends.

On the response to his fight versus Nashville
It was positive. We’re missing Pep right now, he’s a big part of our physicality in that sense, I kind of felt they were starting to run around a little bit. I just wanted to let them know, and show our team, that nobody’s going to walk all over us, no matter if we’re up 6-1, down 6-1 or 3-3. That’s just a little competitiveness coming out, he’s a bigger guy, obviously, but it didn’t matter at that point, kind of just wanted to make a statement there.

Kings are back at it for game action tomorrow evening against Seattle, the first time the Kraken have ventured to Southern California! Puck drop is set for 7:30 PM at Crypto.com Arena.