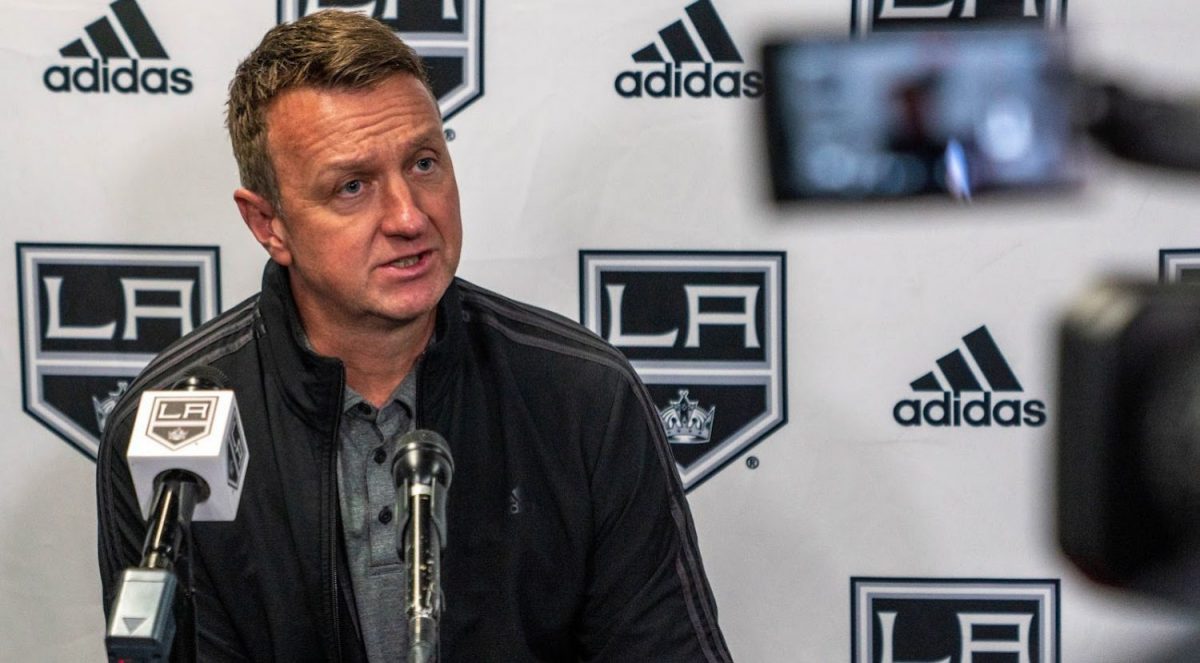 Insiders, SO much information came from today’s media availabilities that I’ll have to break it into a few different articles to get everything in.

“I think we understood where we were standing and teams are always in different situations, what they want to do and accomplish and what they want to try and fix at the deadline,” Rob Blake said. “You pay attention to it all, it all unfolded over the last 4, 5 days here. Always excitement on deadline day.”

– The organization expects to have forward Viktor Arvidsson and defenseman Tobias Bjornfot back soonest, with both players skating already and potentially returning to the full group for practice as soon as this week. Forward Brendan Lemieux is around a week behind that duo.
– Defenseman Matt Roy could resume skating by the end of this week, which is a good sign, though no update on his timetable beyond that.
– Defenseman Mikey Anderson has a “6-8 weeks” timeline from the date of his injury, which places him around mid-April, per Blake.
– Defenseman Drew Doughty’s situation is one that “needs to be reassessed before bringing him to a point that looks like a full practice.” Doughty has skated every day since his injury, but in a limited capacity. Blake said that it’s too early to say Doughty’s season is in doubt and that the Kings will “exhaust every option possible” before making any type of declaration like that. It’s a situation that will be assessed with a doctor over the next few days, to determine when he can make the next step to participate in practice in full.
– Forwards Andreas Athanasiou and Dustin Brown are not skating at the moment and are not scheduled to skate soon.

Good to get more of a detailed understanding of how the Kings see each of the eight players currently out of the lineup, but not yet ruled out for the remainder of the season. Blake reaffirmed that, at this time, Anderson was the only player that made sense to place on long-term injured reserve at this time, joining Sean Walker who is out for the season.

“We looked at some things, but we also understood the situation we could get ourselves into in the next two or three weeks, with guys coming back,” Blake said.

LTIR has the potential to provide short-term cap space, but as Blake added, you have to be able to have the room to eventually get those players back in when they are healthy. The way the situation shook out for the Kings did not lend itself, at this time, to the Kings going beyond Anderson on LTIR.

Stetch Your Drift
Both Blake and Todd McLellan – and Troy Stecher himself – spoke about the largest move the Kings made at the deadline, which was the addition of a veteran defenseman on the backend.

Stecher brings with him nearly 350 games of NHL experience to a backend that is currently missing several key members. Both Blake and McLellan looked at the addition through their own lens and both seemed pleased with the newest King. On Blake’s side, he felt that adding some NHL experience to a very inexperienced backend was important.

“It was some experience there, he’s been out with an injury, missed some time this year, but he’s been back playing,” Blake said. “To be able to give a few more options, we’re young on the backend the last few games and on the injury report, we don’t expect anybody back other than Toby by next week.”

From McLellan, he was complimentary of Stecher in the same way that Detroit Head Coach Jeff Blashill was – competitive.

Stecher is a competitive player, who has experience in the NHL. Blashill talked about Stecher’s ability to take what’s given to him, with McLellan echoing similar thoughts with the ability to move pucks. An addition that both coaches and management alike seem happy with.

“Troy is a competitive, competitive player,” McLellan said. “He battles, moves pucks well, gives us a veteran presence back there right now when we’ve got so many young players in the lineup. He’s well aware of the Western Conference and the Pacific Division more importantly, he’s played here a lot, so he understands the opposition.”

The player himself expressed excitement about joining the Kings. He found out about the trade yesterday as he was woken up by a phone call, which followed a 7 AM arrival on a cross-country flight home from Seattle.

“Obviously super excited to be here,” Stecher said this morning. “Looking at where we’re at in the standings and the playoff race out west, I’m excited to join this team. Everybody’s super friendly and welcoming, they’ve made me feel at home ever since I’ve got here. I don’t know too much about the organization, I’m familiar with some players and past players, so I’ll reach out tonight to some of those guys and get in quick.”

Stecher skated on a pairing with Alex Edler this morning in select drills, with the expectation the Kings could start that way tomorrow. More to come on Stecher, what he brings to the Kings and his relationship with Edler!

Bringing Back Blake
One thing was for sure from today’s availability – Everyone values Blake Lizotte.

Lizotte entered the NHL back in the spring of 2019 as an unknown, a college free agent signing who joined a team in transition, a team looking for young talent to help turn the team over into the vision you see today. Lizotte worked his way onto the NHL roster in training camp the following fall and hasn’t left. This season, Lizotte found a home on the team’s fourth line, bringing with him the qualities you want to see in everyone on your team. That’s a great thing.

“I think he’s really defined himself this year,” Blake said. “That line was very productive when healthy for us and kind of drove the engine of the team, as Todd like to say. It was nice to get him rewarded and get him signed.”

The coaching staff respects Lizotte in the same way and today, they respect him as a player under contract through 2024.

McLellan has frequently called Lizotte the “captain” of his line, with several of his best traits really making their way not just throughout his three-man unit, but the Kings as a whole. On nights where the team is lethargic, Lizotte brings energy. On nights when players don’t have it, Lizotte has the ability to bring them into the game. He kills penalties, wins faceoffs and embraces his role. Great things to keep around.

“He’s the little engine, he drags a lot of players into the game, he drags our team into the game,” McLellan said. “I don’t think he cheats anybody in the organization, whether it’s on the ice or off the ice, and those are good players to have in black and silver.”

Up & Down
– Blake also provided an update on the four players assigned to the AHL’s Ontario Reign earlier today. Those moves made the quartet of Quinton Byfield, Rasmus Kupari, Gabriel Vilardi and Jordan Spence eligible for the postseason at the AHL level, should that opportunity arise. All four spent time in Ontario this season and all four would be major contributors towards a potential playoff run at the AHL level, should the Reign outlast the Kings in the postseason.

That is not the primary concern, however.

The primary concern is getting the LA Kings into the postseason, and the corresponding moves the Kings make will have that goal in mind. While an AHL playoff run is important, and those four players will play a part in it if the situation arises, the hope is that they’re a part of a run at the NHL level instead.

“There’s thought about that, but I think our thought up here is giving us the best possible roster to get us into the players up here,” Blake added.

Blake indicated that the Kings would make recalls to get the Kings back to a full roster, with the team set to take on Nashville tomorrow evening, and he made good on that promise with all four players already recalled to the Kings. Blake estimated a look of 12 forwards, seven defensemen and two goaltenders in the interim, with the possibility of making further moves down the stretch.

“[Those moves were made] to set our current rosters, those four went down just after practice and then we’ll make our other recalls to get our roster back, likely to 12 (forwards), 7 (defensemen) and 2 (goaltenders) by the look of it.”

Late Action
In a minor deal that trickled out after the deadline had passed, the Kings acquired defenseman Nelson Nogier from the Winnipeg Jets, in exchange for defenseman Markus Phillips. Nosier has tallied six points (3-3-6) this season with the AHL’s Manitoba Moose, with the 25-year-old blueliner appearing in 242 AHL games in total over the past six years.

Insiders, consider this 1 of 2 today with recapping the deadline. Hopefully following later on today will be several additional videos, photos, quotes and storylines from today’s media session, which included interviews with Blake, McLellan, Stecher and Lizotte!