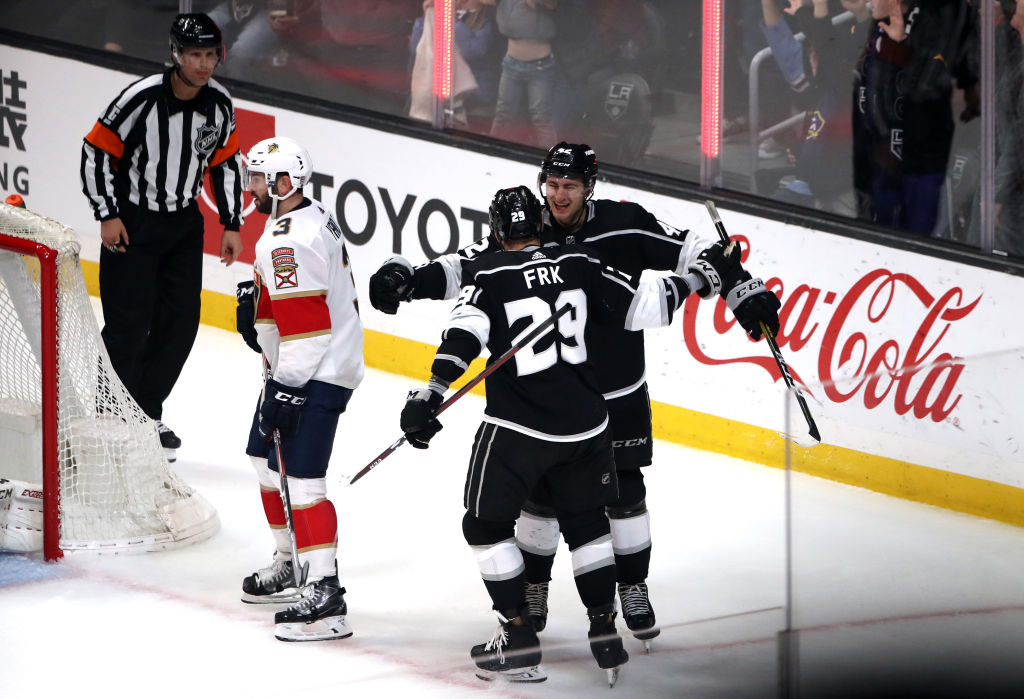 Some large-scale roster moves this morning for the @LAKings.

Not the best emoji for injured reserve, but you get the point.

As noted above, via some well-placed emojis, the Kings have recalled forwards Gabriel Vilardi and Martin Frk, as well as defenseman Austin Strand, from the AHL’s Ontario Reign. The Kings have assigned forward Jaret Anderson-Dolan to Ontario while forward Dustin Brown (retroactive to 3/12) and defenseman Drew Doughty (retroactive to 3/7) are both headed to injured reserve.

In terms of those joining the roster, the Kings add a potential offensive punch in Vilardi and Frk, who have been two of the leaders this season at the AHL level. Vilardi was a point-per-game player entering last night’s game in San Diego and now has 38 points (15-23-39) from 39 games played this season with AHL-Ontario. Vilardi has a goal from seven NHL games played this season, spent mostly at center, while his time in the AHL has been mostly on the wing, a position he’s learned over an extended stretch.

Here’s Rob Blake on Vilardi from a few weeks back –

“We see him playing for the Kings eventually,” he said. “We use the American League to help develop. He had a real good training camp, a tough start to the season, but he needs be involved in power plays, getting up and down the ice, playing with pace. We switched him to the wing in the American League, it’s a different position than he’s normally played, but he’s producing. He’s over a point-per-game, a goal every other game. [The AHL] is where they get the ability to play that many minutes. There will be a situation where we get him into our lineup, eventually, but right now, it’s his current process and progress going forward.”

Now, with so many players out of the lineup, the situation presents itself for some of those things to potentially happen for Vilardi here with the Kings. Frk is in the same boat, as he’s done everything asked of him and more at the AHL level. No player has more goals at the AHL level this season than Frk’s 31. He’s ripped home 13 on the power play, second-most in the league, and has been a threatening, offensive force. In two NHL games, Frk scored one goal, a power-play goal against Nashville, back in January.

Strand provides additional insurance for Matt Roy, who was injured last night but was not placed on injured reserve at this time. Strand has played NHL games over the last two seasons, including four here in 2021-22, with two assists in the game in Detroit on February 2. Strand has shown he can be a solid, physical player at the NHL level, with a crisp, quick first pass and a decent shot from the point. Roy’s status is unknown for tonight, so we’ll have to wait and see on a projected lineup for this evening.

With Anderson-Dolan, he returns to Ontario after a stretch of five games here with the Kings. We saw a lot of the good things that Anderson-Dolan brings and under different circumstances, he might still be up. But, the other day, Todd McLellan talked about using different ingredients on different nights, depending on circumstance, situation and opponent. Right now, the Kings may feel as if more offensively-driven players could shake things up positively, considering those injured, with Anderson-Dolan’s strengths potentially provided by other, non-waiver exempt players. Wouldn’t be surprising to see him back down the stretch.

On the injury front, the Kings have now added six players to injured reserve stemming from the last five games. Placing a player on injured reserve does not provide a team with any salary-cap relief, but it does open up a spot on the 23-man roster, which was necessitated by today’s moves. To add all three players, the Kings needed corresponding moves, which they made with Brown and Doughty.

As noted last night, Brown is expected to miss an “extended period” of time with an upper-body injury. Doughty is still listed as day-to-day, and this designation does not change that. With his move retroactive to his injury on March 7, Doughty would be eligible to come off IR as soon as Tuesday’s game against Colorado, should he be healthy. In terms of the other players on IR, the trio of Mikey Anderson, Viktor Arvidsson and Brendan Lemieux are labeled as “week-to-week”, while Andreas Athanasiou has an “extended period” designation. As has been noted, Alex Edler has yet to rejoin the full group for practice, but could return by the end of March, while Sean Walker is out for the season.

The Kings currently have 13 forwards, 8 defensemen and 2 goaltenders on their active roster, a total that includes Roy (lower-body injury).

Game Preview to follow, Insiders, before another tall task awaits the LA Kings, in the Florida Panthers.