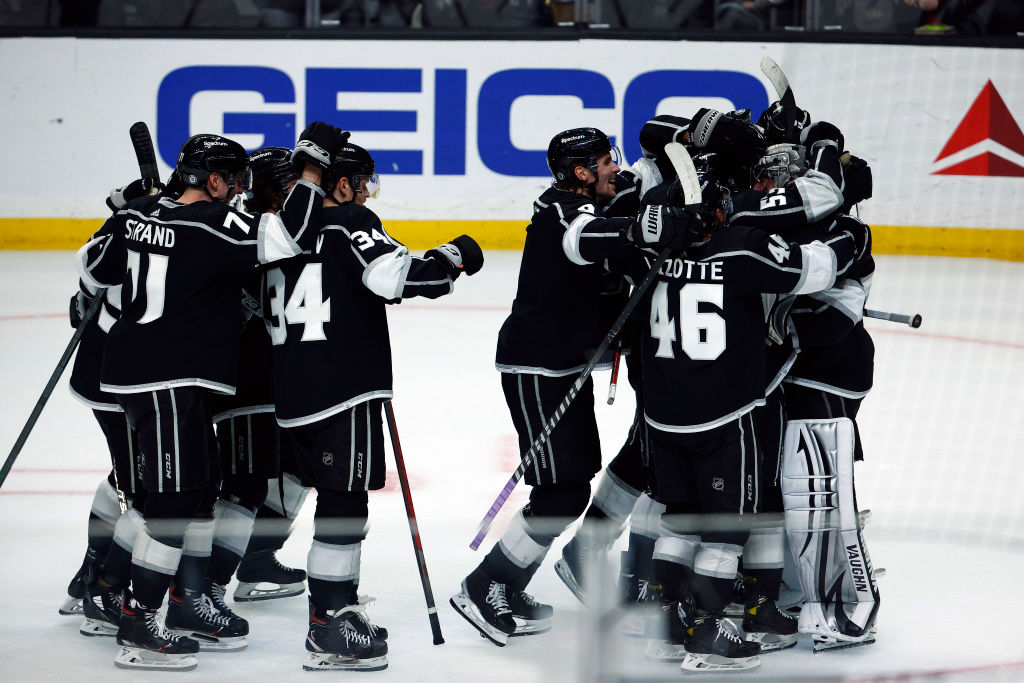 The LA Kings came from behind to earn a 3-2 shootout victory over the Florida Panthers on Sunday evening at Crypto.com Arena.

Forwards Rasmus Kupari and Martin Frk, in their first games back from the AHL, scored in regulation while Adrian Kempe and Trevor Moore each scored in the shootout. Jonathan Quick made 30 saves on 32 shots to earn the victory, as he played in his 700th career NHL game.

The Kings opened the scoring with the lone goal of the first period, taking a 1-0 lead into the first intermission. Kupari took the puck entering the offensive zone, carried it through the slot onto his backhand and slipped his shot past Florida netminder Spencer Knight from the left-hand circle to put the hosts on the board.

Florida scored twice in the opening four minutes of the second period, however, to flip a 1-0 deficit into a 2-1 advantage. First, with the Kings on the power play, forward Eetu Luostarinen got a shorthanded breakaway, which he buried five hole for his ninth goal of the season. Just over three minutes later, defenseman Brendan Montour activated from the point and buried on the second attempt, putting the Panthers ahead 2-1.

With less than a minute to play, the Kings on the power play and Quick pulled for the extra attacker, Frk tied the game at two to force overtime. After Sean Durzi sent a cross-ice pass from the right point, Frk walked in from the left-hand circle and wired a slap shot off Knight’s glove and in for his second goal in three games this season.

After a scoreless overtime period, one that featured a Kings 4-on-3 power play that was not converted, the two teams went to the shootout. Aleksander Barkov scored for the Panthers, while Kempe scored for the Kings, before Moore tallied in Round 5, followed by a Quick save to earn the two points.

*Defenseman Tobias Bjornfot left the game in overtime and did not return. McLellan didn’t have an update after the game, indicating that he was being evaluated at that time.

Todd McLellan
On a huge win tonight
Very big win, for a lot of reasons. Obviously the points, but maybe more importantly, the belief system, that was something that was in question, I think, heading into the game with the number of bodies we have missing. In San Jose, I don’t think we overcame it at all, I don’t think we were prepared for it yet. We regrouped and we responded well tonight.

On the players coming in finding a way to contribute
They bought into the organization. We’re one big team, I think, finally. The Reign, the Kings, we all play the game the same way, so when they come in, it’s kind of seamless. They understand the language and a lot of them have been here. They’ve gone back and polished their games up, including JAD and Lias, but when Ras came back today, I thought he looked a lot more like he did at the beginning of the season than he did at the 30-game mark, and that’s what the American League is for. I thought Gabe did a tremendous job, he learned a new position, moved to the wing, suited real good for there, board battles, stick battles, that type of stuff. The D, the rest of them have been here for a little while, but Strander came in and he did what he was called upon to do. The organization, as a whole, is one big team. It pays off when they all play the same way.

On the kids line with Byfield, Kupari and Vilardi
Yeah, there was some pace on that line through the middle and with Ras on the wing and, as I mentioned, Gabe did some corner work. They were desperate, they wanted to prove that the staff made mistakes by not keeping them, and that’s what players have to do. If they keep proving us wrong, that’s a great thing, we want to be wrong….and Frker, we haven’t talked about Marty. We brought him up to shoot the puck and he shot the puck. He played fourth-line minutes and he shot the puck, so good for him.

On Jonathan Quick playing in 700 regular-season games
It’s remarkable, really. Quickie has played a hard 700, those 700 don’t include all of those runs in the playoffs and all of that other stuff. The milestones for players, they should include all of those other games, because what’s Quick at then, 775, almost to 800? Commitment, health, he hasn’t been totally healthy for his whole career, but his commitment to his craft and his competitiveness. For as stubborn as he is, it’s what makes him a really good goaltender. The guys were so happy for him tonight.

On the attitude on the bench in the third period
For as good of an offensive team as they are, they really checked in the third, which is the sign of a really good team, which obviously they are. They made it hard to get through the neutral zone, but we stuck with it. Not every shift was an offensive shift, but we thought we were getting the odd chance. Kind of like Boston, where we had to use every minute we were given and we couldn’t waste any. It worked again for us.

– Goaltender Jonathan Quick appeared in his 700th career NHL game this evening. Quick became the 30th goaltender all-time to reach the milestone and the fourth US-Born goaltender to do so.
– Forward Rasmus Kupari scored in the first period, his first goal in the NHL since December 5.
– Forward Martin Frk made it two goals from three NHL games played this season, as he tie the game late in the third period.
– Defenseman Jordan Spence collected his first career NHL point with the secondary assist on Kupari’s first-period tally.
– Defenseman Sean Durzi collected an assist tonight, his 15th of the season. Durzi also led the team with 26:14 in time on ice.
– With another comeback victory tonight, the Kings are tied for sixth in the NHL with 16 comeback wins this season.

The Kings are not scheduled to practice tomorrow, considering the back-to-back over the last two days. The team is set to return to the ice on Tuesday, for morning skate in advance of that evening’s game versus Colorado.